With continued volatility in key global markets, the gold price is set to skyrocket to $2,300 in 22 months! There is also a remarkable chart included in this fantastic piece.

“The greatest shortcoming of the human race is our inability to understand
the exponential function.” — Albert Bartlett

Gold Is Back!
The instability of growth induced by credit expansion, which we routinely criticize, is impressively illustrated by the following chart. Since 1959, “total credit market debt” – the broadest debt aggregate in the US – has increased by 9,100%, its annualized growth rate amounts to 8.26%. In every decade, outstanding debt has at least doubled. In order to get credit-induced GDP growth to restart again after the volume of total outstanding debt dipped slightly for the first time in 2009, the Fed implemented a series of never before seen monetary policy measures (see chart below). 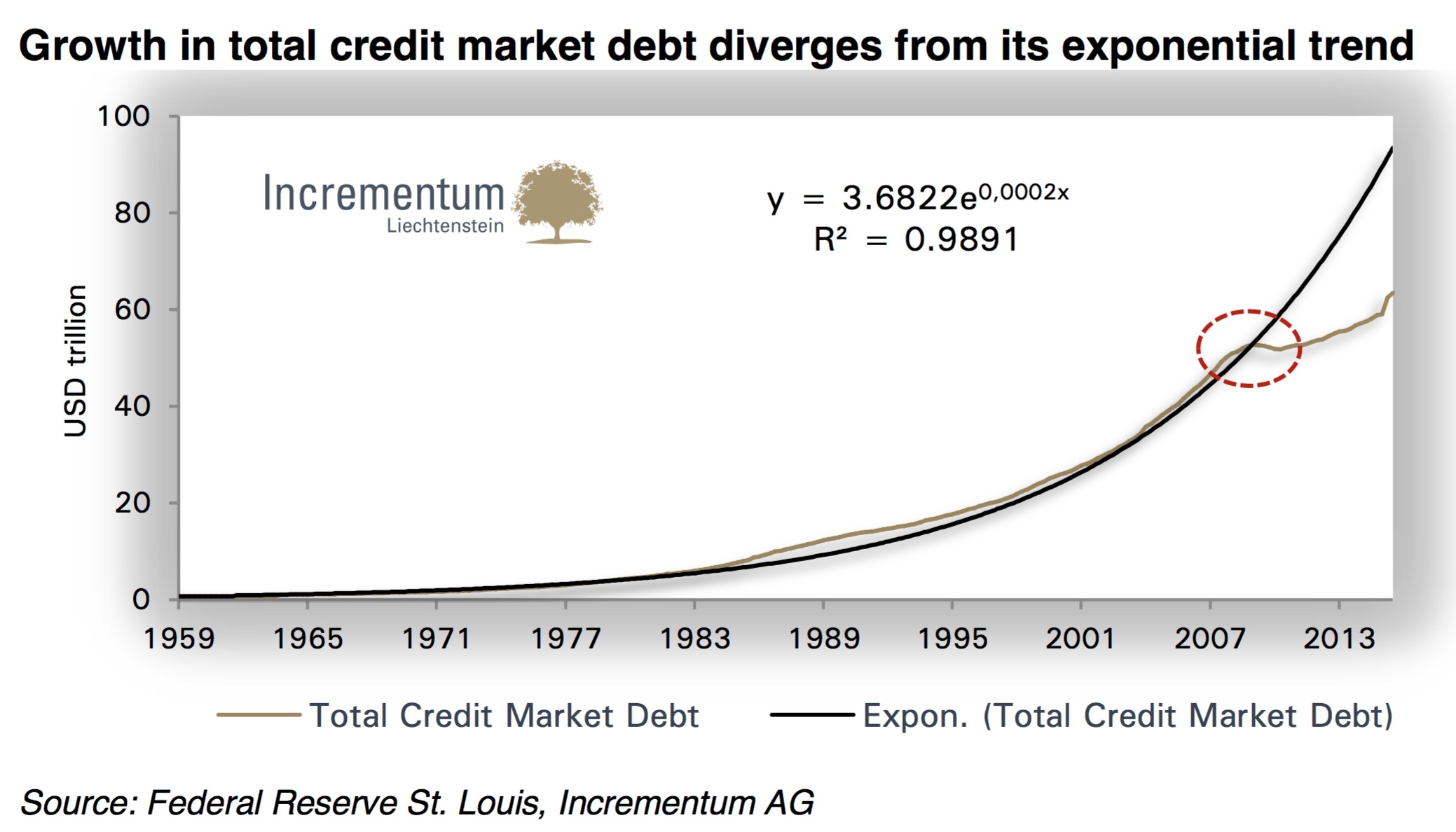 There Is No Way To Reverse This Money Growth
There is no reverse gear that can be engaged in this monetary system – the money supply has to be increased incessantly, which in turn means that the amount of credit in the system continually rises as well.

The fact that the steady expansion of the volume of outstanding debt has run into snags in recent years characterizes the current critical phase in the monetary system’s evolution. Over the medium-term, the record level of debt will either be dealt with by defaults or a forceful reflation, possibly in the form of “helicopter money”.

Due to this critical assessment of the situation, we continue to argue in favor of a strategic allocation to physical gold for long-term oriented investment portfolios.

Gold Price Headed To $2,300 In 22 Months!
We went far out on a limb last year by projecting a price target of $2,300/ oz. for June 2018 amidst a pronounced bear market. The first step in this direction appears to have been taken. The commodity sector, as well as gold, seems to have formed a bottom. Early this year gold celebrated an impressive comeback, exhibiting strong vital signs.

We are nevertheless still a long way from our $2,300 price target. In order to reach it, currently prevailing perceptions of the global economic situation will have to change. Moreover, the feasibility of interventionist monetary and fiscal policy will have to be fundamentally questioned.

There are more and more signs that scepticism is rising. Something quite telling happened at Ms. Yellen’s press conference after the March FOMC meeting. The first question that CBNC journalist Steve Liesman asked her was:

“Does the Fed have a credibility problem?”

Serious Inflation Is Coming
With respect to future rate hikes, the verbal dance on eggshells commonly known as the Fed’s communication policy doesn’t exactly inspire confidence, as no clear monetary policy strategy is discernible. A significant downturn in economic growth, followed by a renewed stimulus program including even more extreme measures would increase uncertainty further. In this case it would have to be expected that the gold price, commodity prices and also price inflation, would rise.

In our opinion, this or similar scenarios have a high probability of eventuating within the coming 24 months, and we are therefore sticking with our price target of $2,300 by June 2018. The current combination of obvious over-indebtedness, expansive fiscal and monetary policy and the unrelenting determination of central banks to generate price inflation, continue to represent a stable foundation for further advances in the gold price.”

***Also Just Released: The World Is About To Experience Something Not Seen Since The Black Death Click Here.