Today the man who has become legendary for his predictions on QE and historic moves in currencies and metals warned King World News that a Depression will be unleashed as the global super bubble pops.

February 6 (King World News) – Egon von Greyerz, founder of Matterhorn Asset Management (based in Switzerland):  In an investment world of instant gratification, when short term trading and speculation is the norm, real values are forgotten.

In the 2000s, fortunes have been created which are of magnitudes that are unfathomable.

No speculator or investor has had to plan his investments in this century on a 100 year basis as Confucius suggested. Instead wealth beyond anyone’s wildest dreams have been created in a couple of decades.

Just take some of the wealthiest Americans today. Pre-1994, the following multi-billionaires hadn’t even started their businesses:

In 1993, before any of the above companies existed, the richest American was Warren Buffett who then had an $8 billion fortune. In 2022, Buffett’s net worth is $117 billion.

So in under 30 years, the richest American’s wealth (Musk) is 33X  greater than the wealthiest American 30 years earlier.

THE NEW ROBBER BARONS WITH MEGA WEALTH BEYOND BELIEF
The total wealth of the 5 nouveau-riche Americans above exceeds the GDP of countries like Switzerland, Holland, Sweden and Poland. It is beyond belief that the founders of 5 companies that have been in existence less than 30 years have amassed more wealth than the GDP of countries some of which are over 1,000 years old.

Yes, I know it is all new technology companies in different forms, but take a company like Google which basically offers a more sophisticated yellow pages service on a global scale. The two founders of Google, Page and Brin, have a combined wealth of $234 billion based on a company that produces no tangible products. This is a totally new phenomenon in the last few decades. Founders of companies worth trillions of dollars which are primarily software or technology based have emerged as the new Robber Barons from a century earlier.

Like all new and innovative industries, these technology companies will meet the same destiny as most leading industries throughout history. They will be overtaken by new companies and new technology. Also valuations of many of these companies will decline substantially. Of the original 12 companies in the Dow Jones Industrial Average, NONE remains today. History will most certainly repeat itself over the next 100 years…

END OF AN ECONOMIC ERA
As I have pointed out numerous times, we are now at the end of a major economic era.

Typical for the end of a cycle are bubbles in many asset markets and commodities. This is exactly what we have seen in this century with historical overvaluations of stock, bond and property values.

The Buffett Indicator now shows US stocks at over 200% above GDP. This is an epic overvaluation and massively above the 2000 high of 140%. See graph below.

GRANTHAM – “A SUPER BUBBLE”
As Jeremy Grantham says, this US Super Bubble is shockingly overpriced. It will not just return to the mean but will go beyond trend on the downside just as it has on the upside.

What we must remember is that Super Bubbles end with a shocking decline in both price and time. What few investors will fathom is that in the next decline, buying the dips will fail.

During my professional life all Western markets have recovered from major falls. This was the case after the corrections started in 1973 (not shown), 1987, 2000, 2007 and 2020. Virtually every fall during those five bear markets/corrections look like a blip on the chart today. 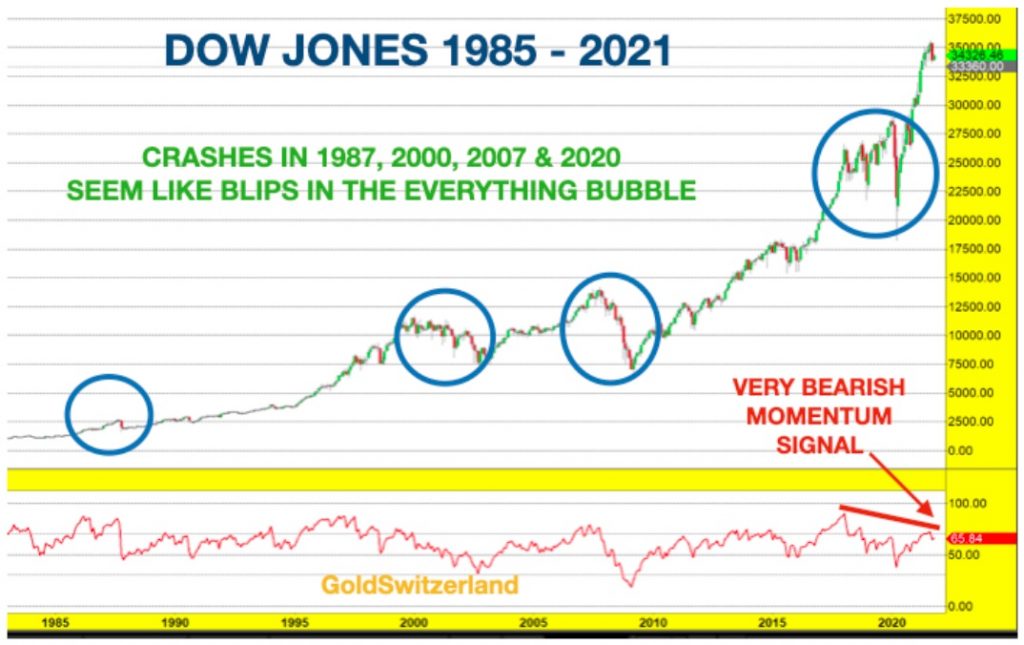 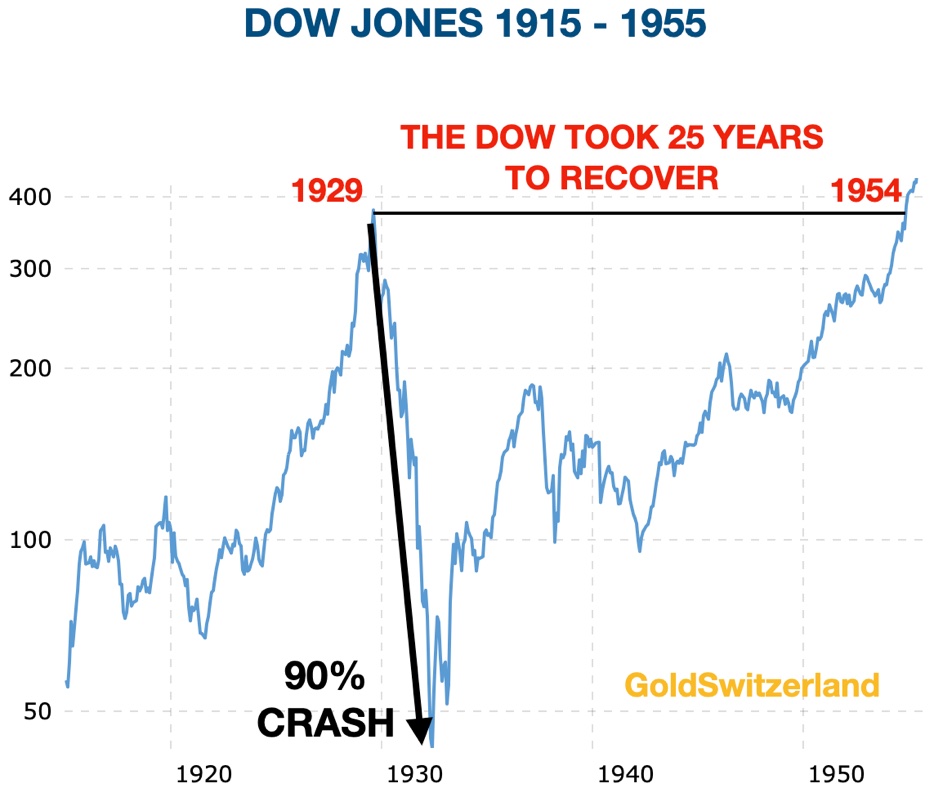 The Nikkei peaked in 1989 at 39,000 and subsequently fell by 89%. Today, 33 years later, the Nikkei has still not reached the 1989 peak in spite of massive money printing and debasement of the currency.

BUYING THE DIP WILL FAIL THIS TIME
So any investor who has the idea of buying the dips when the Super Bubble soon bursts is going to get the shock of a lifetime as he trades in and out of super volatile market which relentlessly turns down after every rally and reaches new lows.

The average investor will continue to expect that the Fed Put (Bernanke, Yellen & Powell) will work as it has done in the past. The Fed Put in simple terms means that the Fed saves the stock market by printing enough money and manipulating interest rates so that stocks quickly recover.

Let’s just remind ourselves that saving the stock market has never been one of the Fed’s official mandates. (For information the mandates are stable/low inflation and full employment.) But the Fed is of course controlled by private bankers in whose interest lies an eternally rising stock market for their own benefit.

But sadly this time the Fed Put will not work, although most dip buyers will not realise this until it is much too late. And so they will ride the coming super bear until they have lost most of their money in real terms.

SUPER BUBBLES CAN ALWAYS GET BIGGER
Remember that a Super Bubble will most of the time extend further than anyone can imagine. So timing the exact top is a mug’s game. Looking at the Nasdaq and the Russel 2000, it seems that the top is already in.

The Nasdaq had gone up a massive 16X between the 2009 top and the peak in November 2021. There is nothing stopping this Super Bubble getting slightly bigger. But it serves no purpose whatsoever to squeeze the last drop out of a market which is up 150X since 1985.

No one goes bankrupt by taking profit too early. But many will lose everything by holding on until the top and then riding the market all the way down.

UBIQUITOUS RISK – IN STOCKS, BONDS, PROPERTY, DOLLAR
But the stock market is just one of the many danger signs facing the investment world currently.

The bond market is equally dangerous and a bubble as great as the stock market. The Federal Funds rate peaked in 1981 at 19% and has been in a 40 year downtrend. Since the Great Financial Crisis in 2008, Fed Funds have been around 0%.

If interest markets were governed by supply and demand, a ZERO percent interest rate would mean that there was no demand for credit. But in a fake and manipulated money market that is clearly not the case. When the Fed Funds rate reached zero in 2008, total US debt was $54 trillion. Today, 14 years later, rates are still near zero but total debt has surged to $86 trillion.

In a free market, without manipulation, such a strong demand for money would have raised the cost of borrowing to the levels in 1980-81, i.e. near 20%. Instead the Fed Wizards are performing their hocus pocus with fake money and fake rates.

But in my view, their game is now up. For the last few years I have expressed that the Fed will lose control of the long end of the bond market and that is exactly what is happening with the 10 year approaching 2%. Next phase is that the long rates will pull the short rates up and rates will rise faster than the Fed would like.

That will make tapering difficult, especially since budget deficits will continue to grow.

Add to that a US housing bubble which is looking more dangerous than during the sub-prime crisis in 2006-8. If we just look at the median sales price for new homes they are up 150% since 2007. 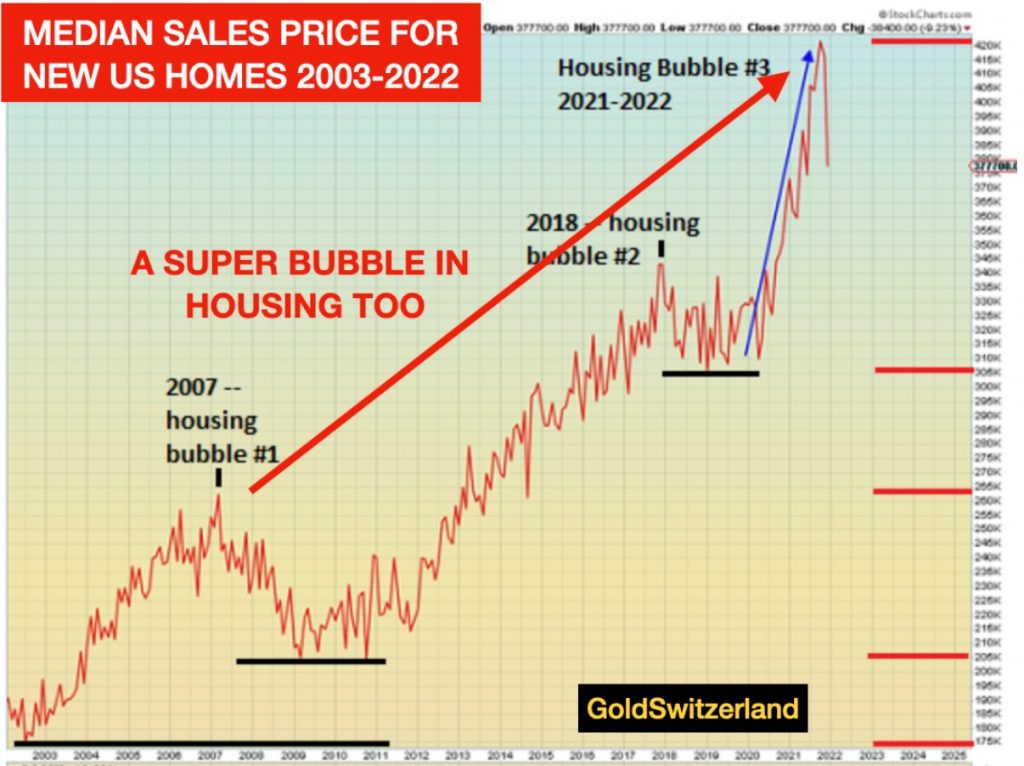 With higher house prices, mortgage loans are also growing and are now $17.6 trillion, 20% above the 2008 peak. It is a virtual certainty that with historically low interest rates, the quality of mortgage loans as well as the leverage is as unsound as in 2006-8. Therefore, yet another problem in the mortgage debt market is very likely.

Another problem area for the US is the artificially strong US dollar. Since the closing of the gold window in 1971, the dollar has declined rapidly. Against the strong Swiss franc for example, the dollar has fallen 80% since 1971. It now looks like the dollar has just turned down again and I would expect a 40-50% fall against the Swiss franc in the next few years.

So the picture clearly doesn’t look good for a US economy which is now on the brink of collapse.

To summarise, starting in 2022, we will see in the next few years falls of 75-95% in US stocks (in real terms), a collapsing bond market and property market, a much weaker dollar and high inflation.

Also, debt will continue to increase until one day the whole debt market collapses, led by the $2 quadrillion derivative market.

So what will be the solution?

Well, the same one that has maintained its intrinsic value for 5,000 years and been the best asset to hold in periods of crisis in order to preserve wealth.

PHYSICAL GOLD – ULTIMATE INSURANCE
Obviously I am talking about physical gold. Since the gold window was closed by Nixon in 1971, gold is up 52X.

Gold On The Verge Of Breaking Out
Of Massive Cup & Handle Formation! 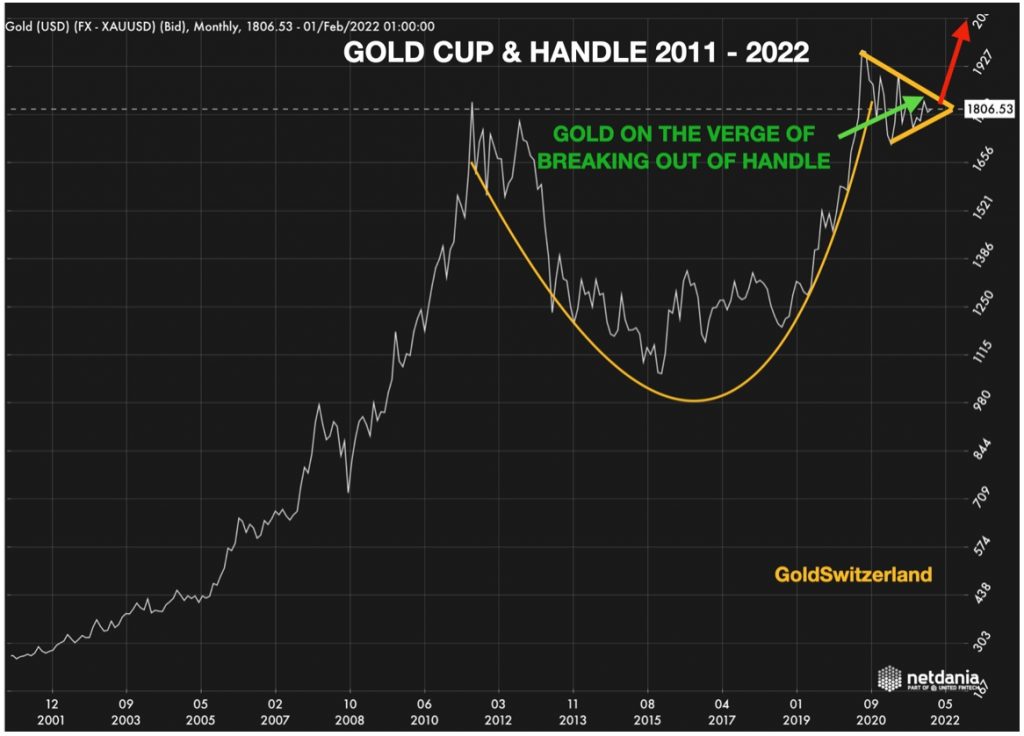 As I have pointed out in most of my articles, gold is now as unloved and undervalued as it was in 1971 at $35 and in 2000 at $290. Therefore gold will not only protect investors’ wealth but also enhance it considerably. 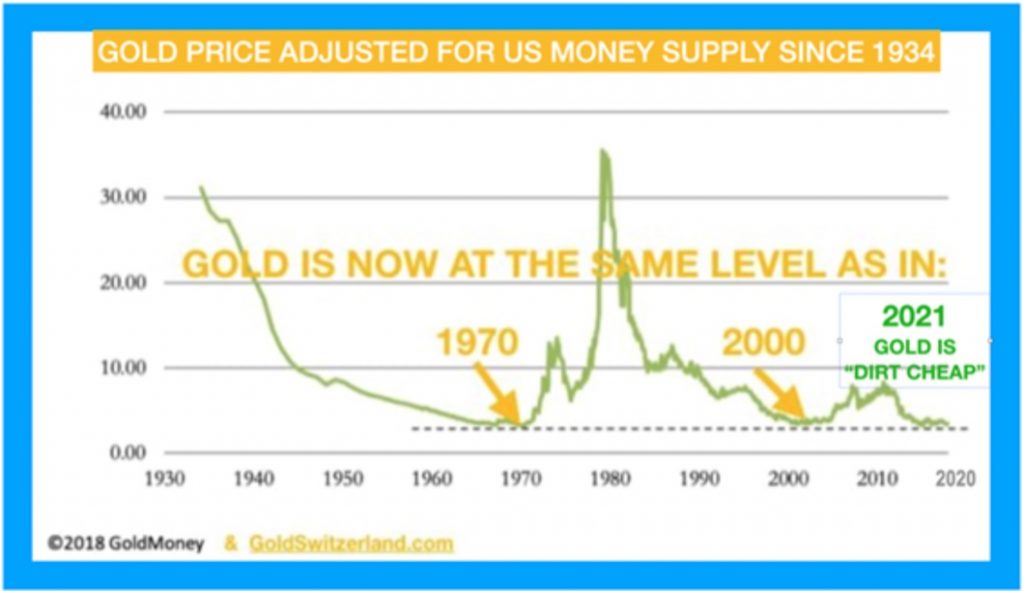 Finally, let us leave the last word to Confucius again with the addition of just two words:

Gold And Gold Mining Shares Acting Like Chinese Stock Market Prior To 100% Surge!

Is This A Harbinger Of The Future?