Here is a look at bullion banks and gold for the back half of 2022.

June 24 (King World News) – Alasdair Macleod:  Gold and silver drifted lower this week as the whole commodity complex weakened. In European trade this morning, gold was at $1826, down $14, and silver at $20.88, down 78 cents. Comex volumes were moderate in gold, but higher in silver relatively. 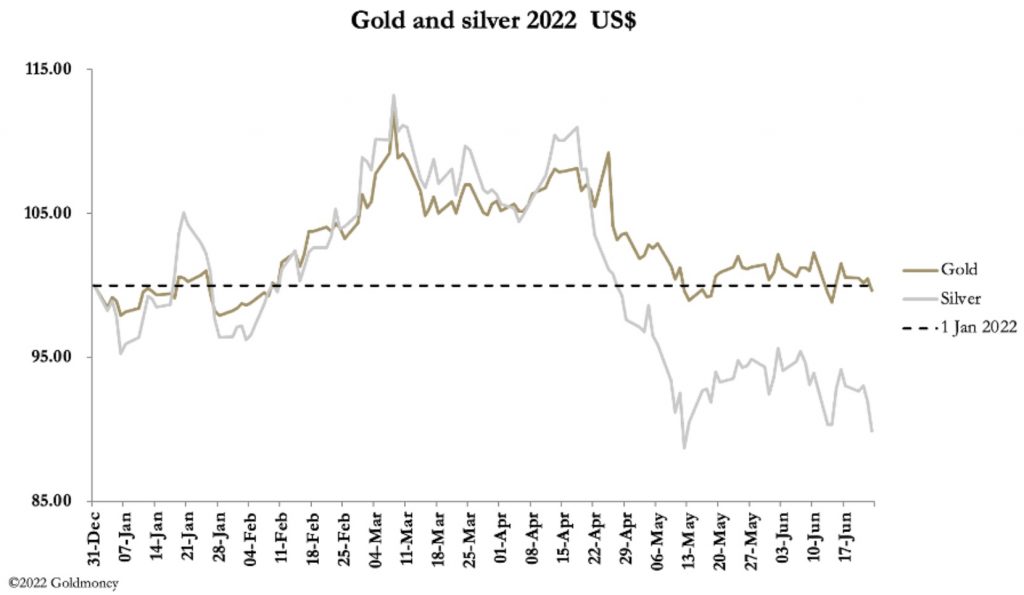 Our next chart is of the wider commodities complex, illustrating the pause in “commodity inflation”. 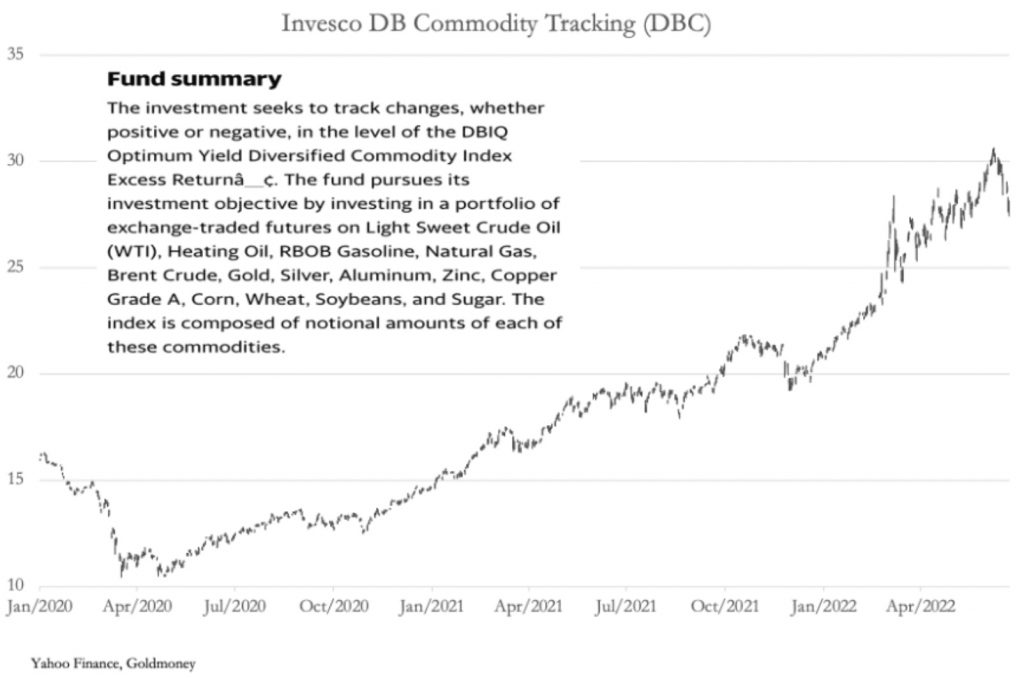 Oil has declined, with WTI falling from $122 earlier this month to $106 this morning. The underlying story is a shift from market concerns over inflation to recession, which has caused many commentators to think that interest rate rises will be capped. According to dominant Keynesian beliefs, this equates to lower demand for consumer goods and therefore lower prices. Government forecasts incorporate this assumption in official estimates of consumer prices eventually falling back to the 2% target level, completely ignoring the consequences of earlier currency debasements.

Bond yields have fallen sharply as our next chart shows. 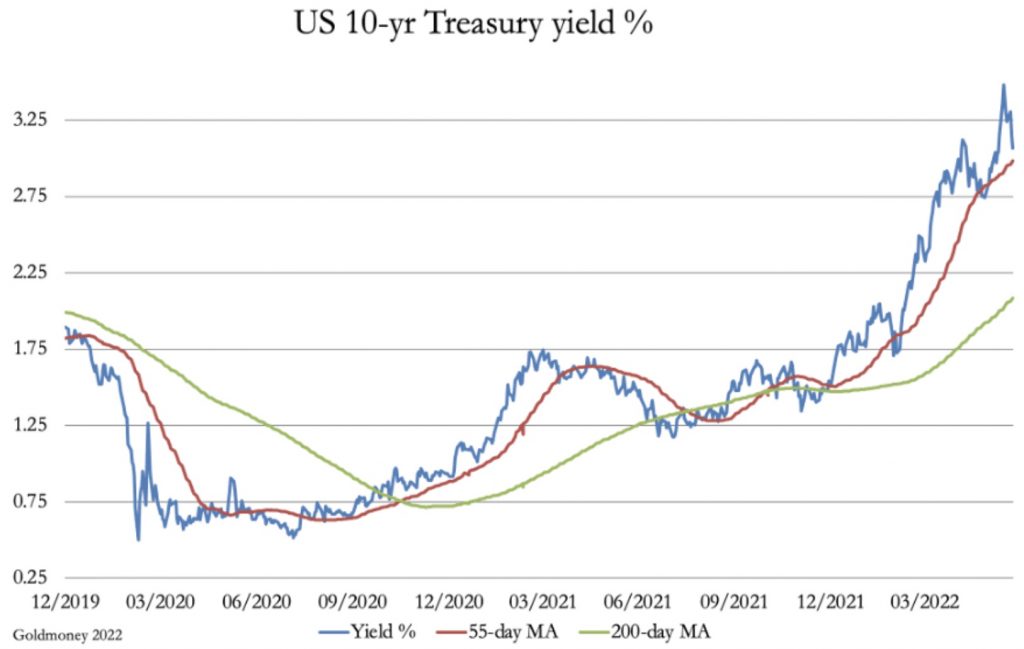 Consequently, the pressures which built up from rising bond yields have eased.

Traders are probably confused over the effects on the gold price. One could argue that a “risk on” environment is bad for gold. Alternatively, you could argue that in a recession gold tends to perform better, due in part to the lower interest rate environment. But these arguments miss the point entirely.

For the last two weeks in these market reports we have warned that the bullion banks, who are short of gold futures and to their customers’ unallocated gold accounts, need to get the gold price down and to close off as many of their shorts as possible with the half year-end approaching. To do so they need to foster as much negative sentiment in the market as possible. And having reduced Comex open interest to the 500,000-contract level from 640,000 last March, they have succeeded to a degree.

That pressure will lessen in July. That they can manipulate markets to their advantage is mainly due to the quality, or rather lack of it, of the perennial bulls. Hedge funds only do pairs trades, with or without algos. This means they very rarely hang around for delivery, which makes them vulnerable to having stops triggered. Additionally, there is an army of gold bugs who only half understand that it is the currency debasement story driving gold prices.

But their understanding stops there. As speculators and investors, they buy into derivatives and ETFs looking for profit. But profits are measured only in the dreaded fiat. Their investment argument does not hold water when they look to sell gold for depreciating fiat.

The point about physical gold, especially in coin form, is that it is legally money. The purpose of money is fulfilled by being stable. And buying gold should be regarded as dumping fiat, which is a less stable form of circulating medium. This point is shown in James Turk’s favourite chart, of oil priced in three major currencies and gold: 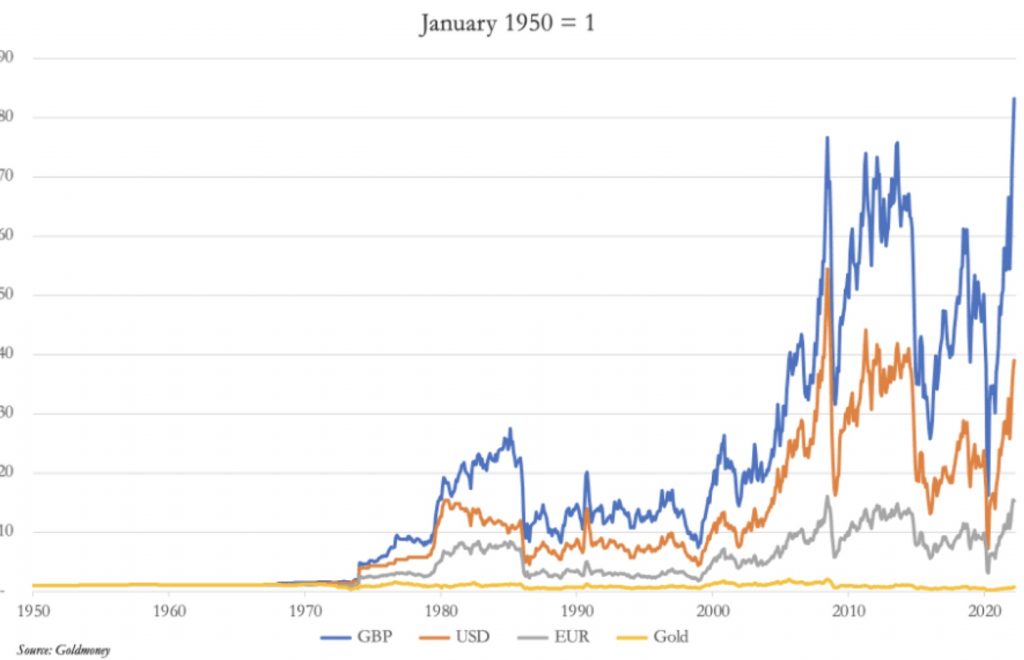 Priced in gold, oil has fallen by 30% since 1950 with minimal volatility. The collapse in currencies is reflected in soaring fiat prices with unacceptable volatility. It’s not that gold has risen, but fiat currencies are falling and will continue to do so.