Sprott Asset Management, which has been making news with its PSLV fund accumulating large amounts of physical silver, is now saying silver demand will explode in the next 10 years.

Silver’s Clean Energy Future
February 18 (King World News) – Mariana Smirnova at Sprott Asset Management:  We live in unprecedented times. As the world’s population grows and industrialization takes hold in more corners of the world, climate change is accelerating, and, in response, humanity’s concern for our planet’s health is growing. The teenage activist Greta Thunberg put it best: “I want you to act as if the house is on fire, because it is.”

As clean energy initiatives gain traction, greater attention is being paid to the critical roles of various metals and minerals. Access to these valuable materials has become critically important, which is why several resource-rich nations, including Canada and Australia, have joined the United States in establishing the Energy Resource Governance Initiative (ERGI), an alliance to disseminate best practices for discovering and developing reserves of minerals used to make electric vehicles.

Silver plays a critical role in all “green revolution” discussions. Although renewable power generation and battery storage technologies may conjure visions of cobalt, lithium and nickel, we would argue that silver plays an even more fundamental role across many green energy technologies.

Silver’s Pitoval Role as an Industrial Metal
We have often discussed silver’s role as a real asset, a currency that generally keeps its value through fiat currency devaluation cycles. Through the COVID-19 pandemic, silver has certainly proven its value as a safe haven asset in portfolios, rising 47.89% in 2020. 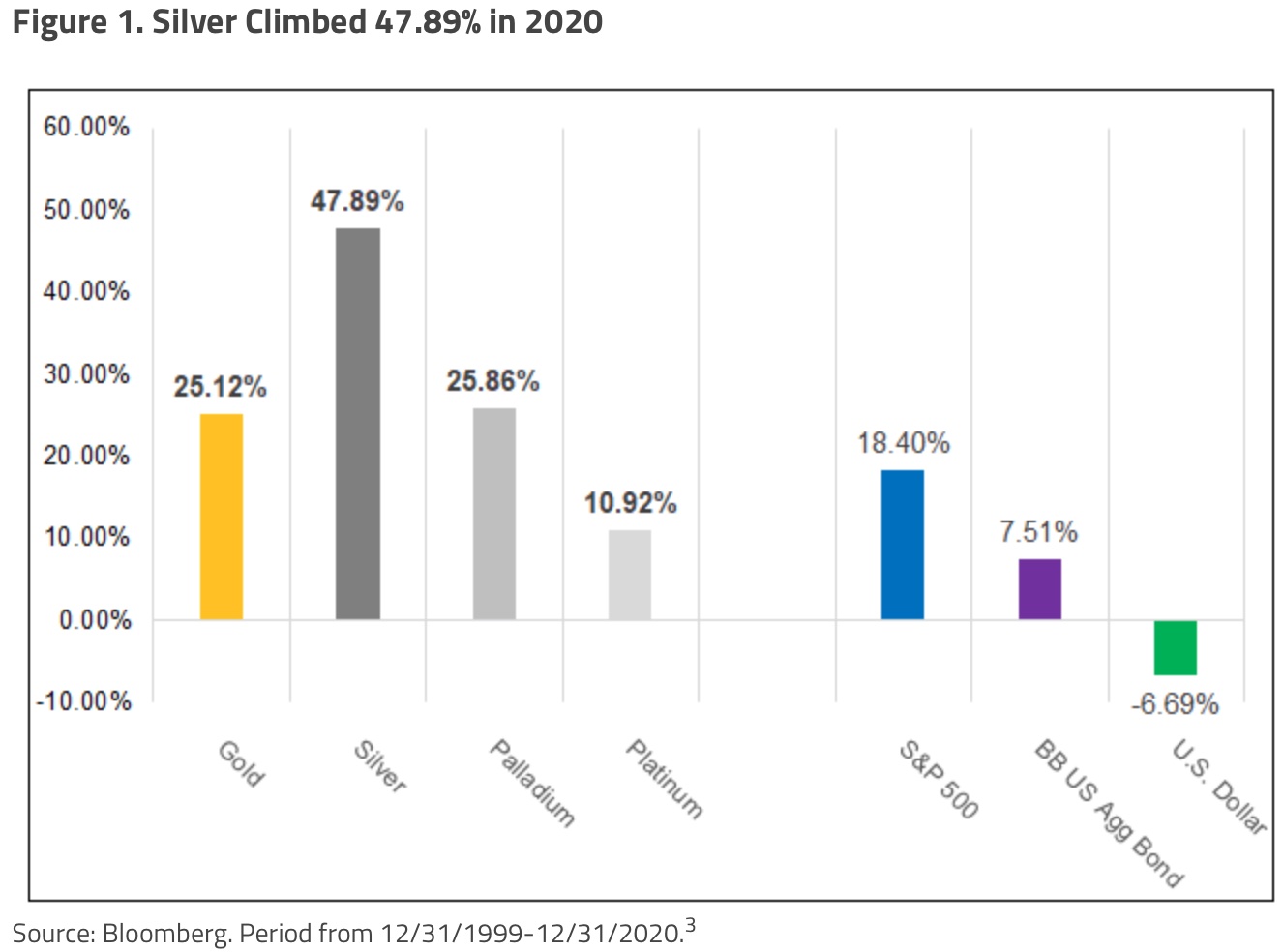 However, we would like to focus on silver’s role as an industrial metal, which we consider the market’s backbone given that industrial demand is not as fickle as investment demand. 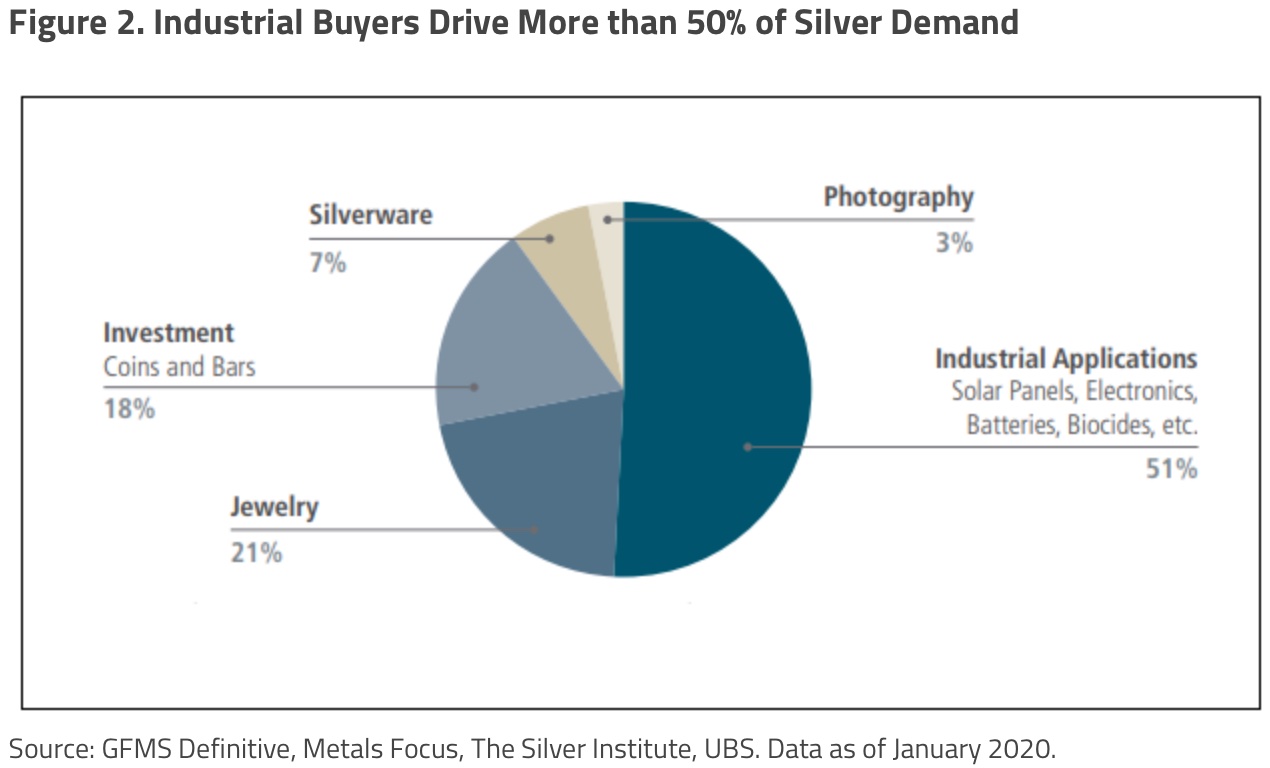 As global efforts to decarbonize and electrify gather steam, we expect three areas to contribute significantly to silver consumption:

All three of these verticals are targeted by President Biden’s Plan For a Clean Energy Revolution and Environmental Justice, which has a stated investment target of US$2 trillion. The U.S. plan is just one example; other governments have committed to industrial decarbonization and ever-tightening emission regulations, and acknowledge the need for more sustainable mobility strategies.

Boosting Electric Vehicles
In January, President Biden signed an Executive Order (Tackling the Climate Crisis at Home and Abroad) setting a goal to transition the U.S. government’s fleet of cars and trucks to electric vehicles assembled in the U.S. As of 2019, the U.S. government-owned approximately 645,000 vehicles, about a third of which are used by the U.S. Postal Service. It is an initial step in a larger effort by the Biden Administration to encourage the transition to EVs. Other campaign promises include building 500,000 EV charging stations nationwide and allowing rebates to replace old vehicles with U.S.-made EVs. At least 15 countries have announced timelines to ban new sales of internal combustion engine (ICE) powered vehicles.

Silver’s superior electrical properties make it hard to replace across a wide and growing range of automotive applications, many of which are critical to safety and to meeting increased environmental standards. Silver is found in many car components throughout vehicles’ electronic systems (see Figure 2). These components include, but are not limited to, conductive pastes in automotive glass, circuit-breakers and fuses, switches, and relays used to activate varying electronic devices. Importantly, silver is used in a wide range of vital safety features, such as airbag deployment systems, automatic braking, and security and driver alertness systems. In addition to higher environmental standards, safety standards worldwide continue to improve and increase the demand for silver loadings. As the auto industry embraces new technologies, silver remains of pivotal importance.

The automotive industry will use approximately 61 million ounces of silver in 2021, according to a report recently published by The Silver Institute (Silver’s Growing Role in the Automotive Industry), with silver loadings being between 15 and 28 grams per internal combustion engine (ICE) light vehicle (depending on the model and market). Silver loadings have been rising over the past few decades and are expected to increase even more in the future. In hybrid vehicles, silver use is higher at around 18-34 grams per light vehicle, while battery electric vehicles (BEVs) are believed to consume in the range of 25-50 grams of silver per vehicle. The move to autonomous driving should lead to a dramatic escalation in vehicle complexity, which will require even more silver consumption. 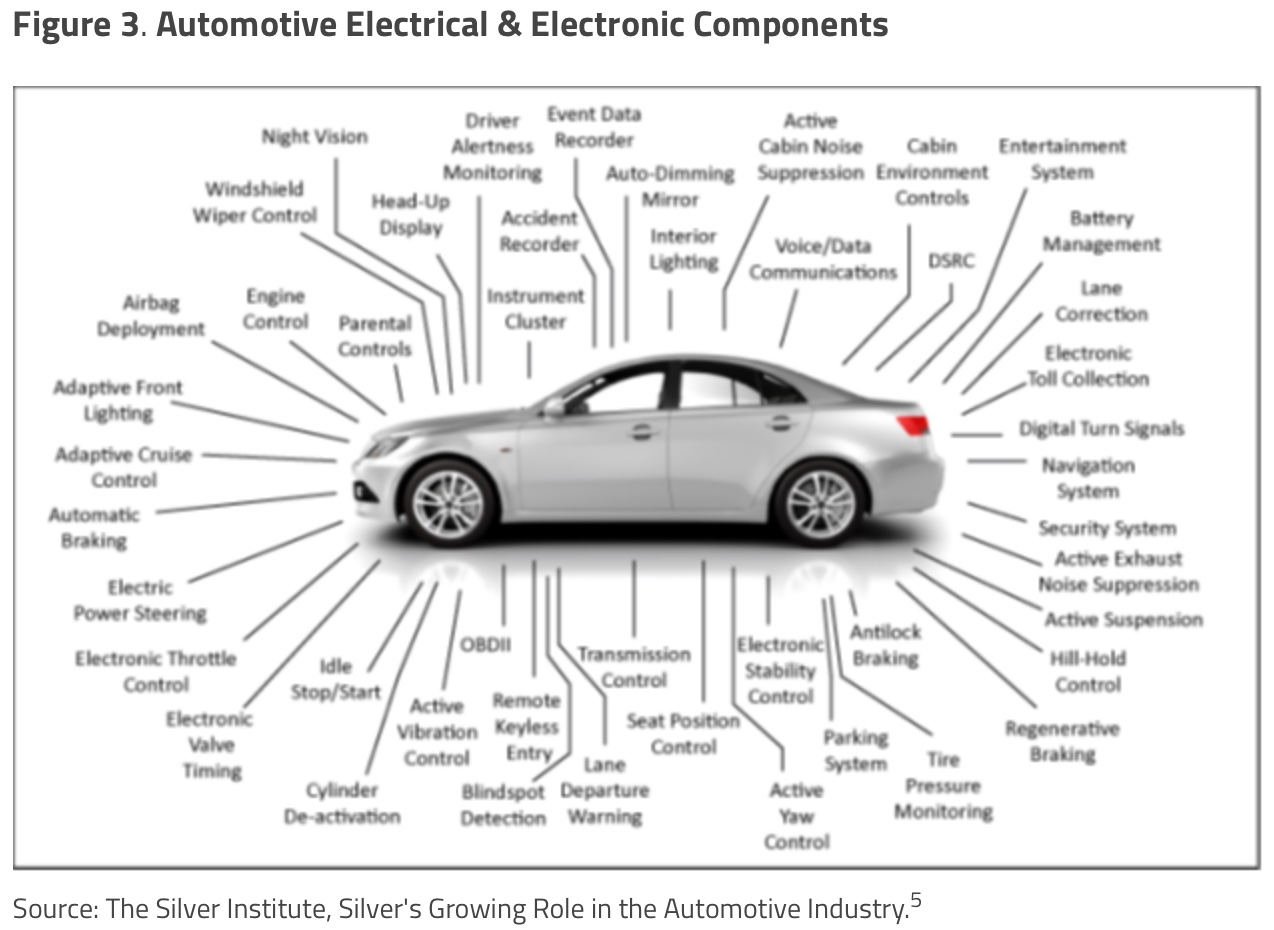 Higher loadings are the primary reason why silver demand is likely to increase significantly as electric vehicles enter the market with greater scale. Another reason for the growing demand for EVs vis-a-vis ICEs is its use in charging stations, additional electric power generation and other supporting infrastructure. IDTechEx (a consultancy that specializes in emerging technology) estimates that by 2029 there will be 10 million public and 50 million private charging points. Finally, we believe the move to autonomous driving will lead to even higher levels of electronic system complexity and further boost silver use.

Growth projections for electric vehicles vary, but adoption is accelerating. An increasing number of governments are introducing incentives and supportive policies and the automotive industry is transitioning from combustion engine powertrains to electric powertrains. The reasons for the government’s push into EVs are decarbonization goals, tightening emissions regulation and the need for more sustainable mobility. ICE powertrains market share will drop from 90% last year to 70% in five years, according to The Silver Institute.

Worldwide, hybrid vehicles made up 1% of the vehicle production in 2010, but by 2020, that number had increased to 8%. Battery Electric Vehicles (BEV) accounted for 3% of production last year, a level that is forecast to triple by 2025. These trends correspond with significant initiatives from large automakers, like GM (General Motors), which seeks to phase out gas and diesel engines by 2035. The Silver Institute estimates that the automotive sector’s demand for silver will rise to 88 million ounces in five years due to this transition, while others estimate6 that by 2040, EVs could demand 49% of the annual silver supply…

Pushing Solar Panel Development
The Biden administration’s plans to combat climate change include the creation of millions of clean energy jobs. To encourage this effort, the administration is building incentives to promote the installation of millions of solar panels. Solar, or photovoltaic (PV), panels already consume a robust segment of the silver market, accounting for approximately 100 million ounces a year.

A PV solar power system essentially catches sunlight that hits the solars cells, turning it into electrons for energy to use now or to store for later. Silver pastes within the cells ensure the electrons move into storage or towards consumption, depending on the need.

Solar panel manufacturers have made an effort to reduce costs and the technology has evolved so that less silver is needed per panel. In 2009, each solar cell required 521 milligrams of silver, but by 2019, that number had fallen to 111 milligrams. Continued innovations are likely to further reduce the amount of silver needed in each cell, which is referred to as “thrifting.” Despite this, efforts to dramatically increase the number of solar panels in use is likely to offset any reduction in the amount of silver required in each cell.

Several regions outside the U.S. have renewable energy targets, including Europe, India, the Middle East and South America. As well, technological innovations in the solar industry may reverse thrifting due to new types of towers requiring higher levels of silver loading. The continued growth of electricity demand, renewable energy aspirations and falling costs all point to rising solar power penetration in the foreseeable future, with some projections of silver demand growing 85% to ~185 million ounces in 10 years. 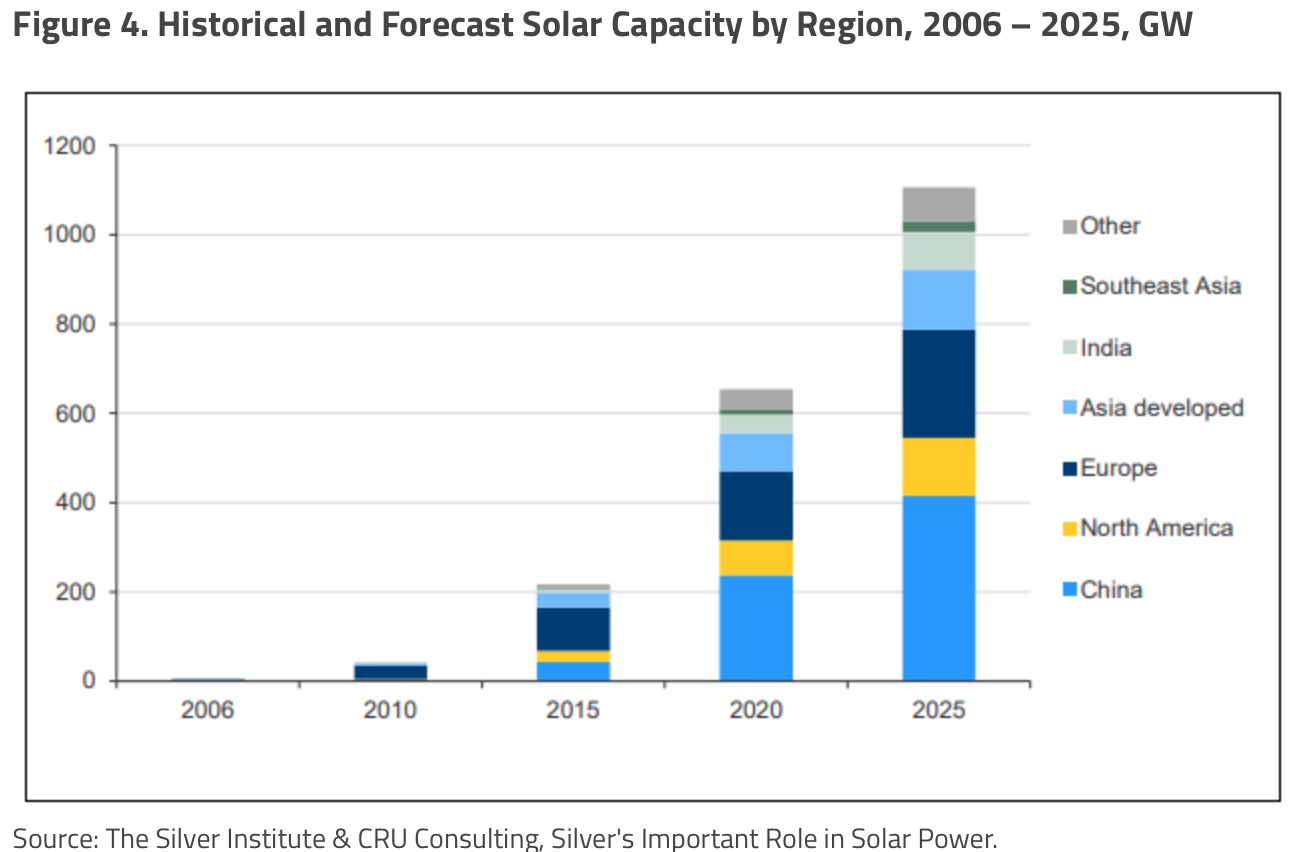 Expanding 5G Cellular Networks
President Biden has yet to take any executive actions on the buildout of 5G cellular technology, but he included it as an important point on his campaign trail. It is expected that any proposed infrastructure plan will include the promotion and expansion of 5G technology within the U.S. to ensure the country remains competitive with countries like China.

This new mobile regime will enhance nearly any technological device that we currently use, from smartphones to the Internet of Things (IoT) to vehicles. With these investments in upgraded infrastructure, technology will have to respond to 5G, placing silver in a unique position to benefit. Semiconductor ICs/chips, both within smartphones and vehicles, are used to process the frequencies 5G requires. As electronics continue to get smaller, this will require denser packaging technologies. According to The Silver Institute, such needs, whether in chips, IoT devices, vehicles, smartphones or other tools, are expected to increase annual silver demand from 7.5 million ounces today to 23 million ounces by 2030.

We would be remiss if we did not mention that the race towards 6G wireless9 is well underway, and we would not be surprised to see an even higher level of silver demand when the next generation of wireless rolls out in the future.

Implications for Supply/Demand
We just discussed three areas of growing demand for silver, potentially accounting for >125 million annual ounces in 10 years. This is a notable amount when added to the growth we are seeing in silver investment demand. At the same time, we do not see enough supply growth to offset the demand growth. Mine supply has been falling since 2016, even before last year’s production shutdowns due to the COVID-19 pandemic, as the industry has been plagued by under investment and falling ore grades. Scrap supply has also stagnated at depressed levels.

We are likely to see a rebound in both demand and supply going forward as mines return to normal operations and economies reopen. However, we believe that supply will not keep up with growing demand as we do not see enough projects in development to generate the kind of production levels in question, at least not at current silver prices.

Our view is that the “green revolution” will be highly positive for silver. 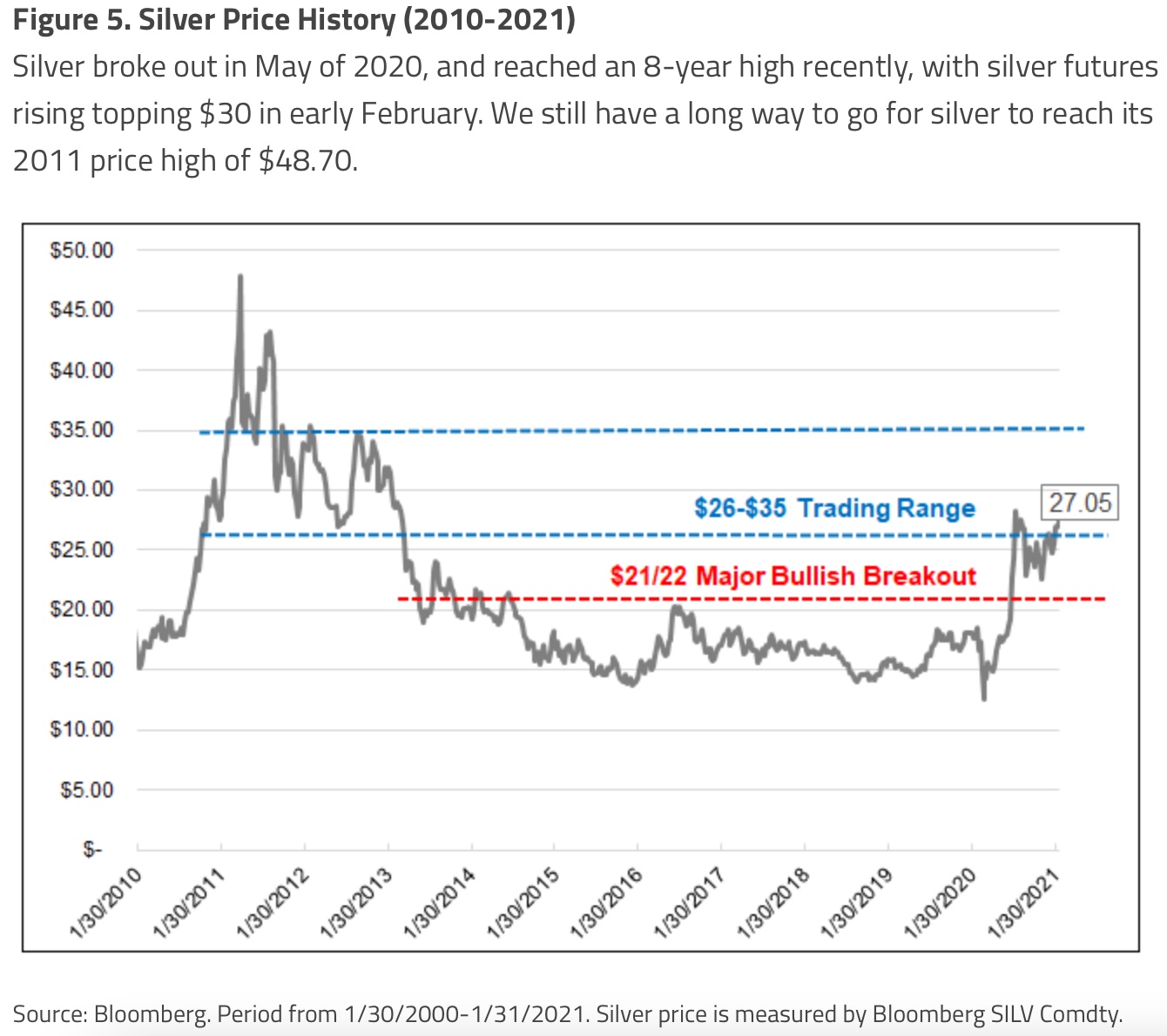