As prepare to head into the second half of 202o, get ready because all hell is going to break loose in global markets.

Another Flood Of Money Printing
June 18 (King World News) – Jeff Snider at Alhambra Partners:  On March 15, 2013, the US Treasury Department issued a request for a “large position report” (17 CFR Part 420). Any institution holding $2 billion or more of the 2% notes expiring in February 2023 (10-year maturity) had until March 21 to disclose that fact to the Federal Reserve Bank of New York (faxed disclosures accepted). The repo rate for this particular security as well as others nearby on the curve was acting suspiciously (heavily special).

This wasn’t exactly the time for worry, at least not in the conventional viewpoint. Ben Bernanke’s Fed had acted to growing signs of financial as well as economic trouble in 2012 by restarting QE for a third time that October. The initial launch didn’t seem to have enough impact such that QE3 was supplemented by QE4 (yes, there were four) in late December.

So far as most people were concerned, another flood of “money printing.” Hooray! With the economy seemingly on the mend from a close call, if 2012 had been a false dawn (as Bernanke would eventually write in his sanitized memoir) then surely 2013 would herald the arrival of recovery at long last.

Four times, apparently, was the charm.

But, repo. Something had been amiss in March and while the usual BOND ROUT!!! suspects chalked up the shenanigans to the piles of UST shorts who were surely betting on Bernanke getting it right for once, not even the Fed believed as much. As I documented contemporaneously here, FRBNY under QE4 had been buying up quite a lot of the OTR Treasury supply; stripping the system of the best of the best repo collateral.

Not long after Treasury called for its large position report, almost certainly hoping to point the finger at someone for “shorting” in excess, instead the entity these banks were reporting to, FRBNY, suddenly stopped buying up OTR issues from then on. Funny, huh?

Collateral shortage. Some have called it a safe asset shortage but that isn’t precisely accurate to its inherent nature.

Clearest Signals Of Growing Trouble
Rather than conclude the matter by mid-2013, it was, as these things always are, a sign of things to come. Major imbalances that were merely noticed and then miscategorized. If Euro$ #3 exploded onto the world in the middle of 2014, laying waste to every last chance for worldwide recovery, announcing itself as the oil price crash from then on, the seeds of the debacle were laid, and were visible, in this precursor nastiness the year before.

One of the clearest signals of growing trouble, apart from China and its first SHIBOR summer, was delineated by TIC. The vast majority of people missed the warning simply because they’ve never been taught the proper way to interpret the data (because Economists don’t know, due to the fact they have no idea what happens in the reserve currency system, either).

Foreigners buy US$ assets because they love us, and then sell when they hate us. Or if not us, they hate the dollar. Or something. 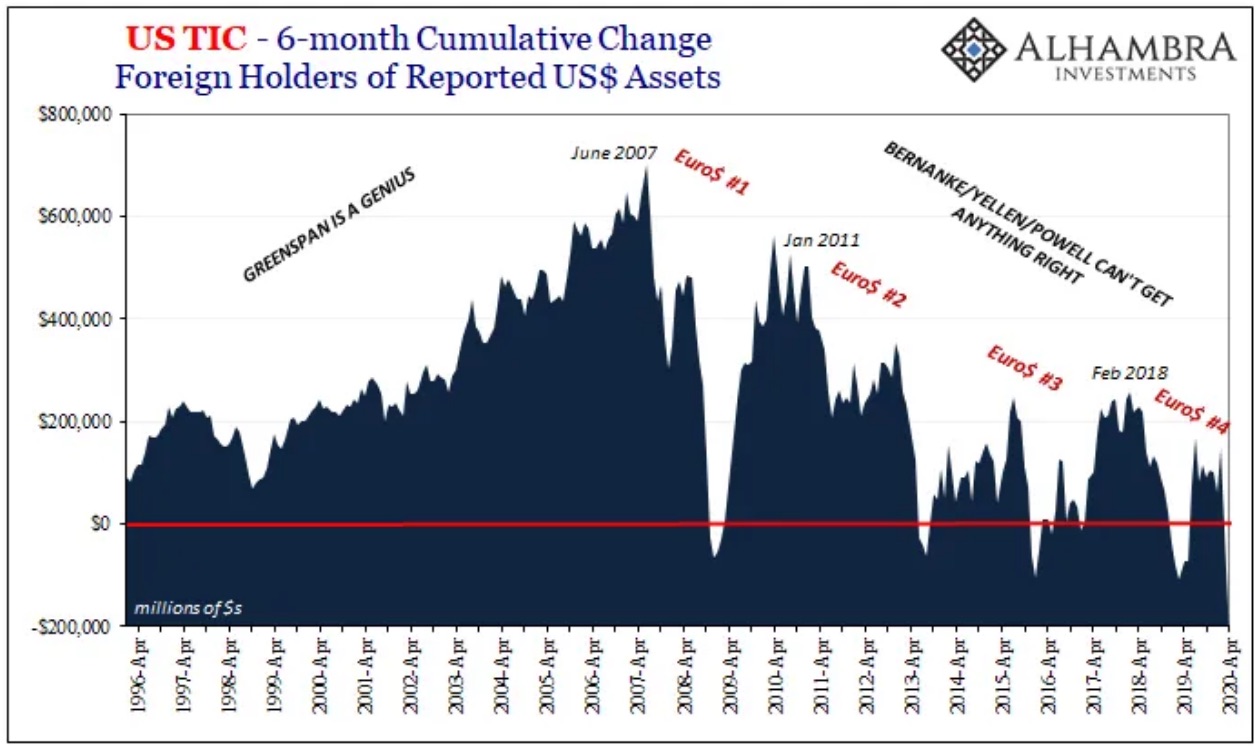 No. When the eurodollar system is functioning reasonably well it acts like a reserve currency should – flooding the world (in fact, not by imagination and reputation) with the necessary monetary means to undertake the vital role reserve currencies must. As a consequence, US$’s end up in a variety of foreign hands, public as well as private, which are then reinvested primarily in UST’s.

Should the eurodollar system malfunction, as it has intermittently since August 2007, the flow of “dollars” stops, negatively affecting a host of financial as well as economic factors (trade most of all). Foreigners first are unable to buy more US$ assets because they aren’t regularly, fluidly, efficiently securing the needed money.

On those occasions when this dollar shortage becomes severe, they have to actively sell their holdings of UST’s and every other dollar-denominated asset in order to stay afloat. To survive, one must have dollars. It’s that simple.

That’s just what happened and in August 2013 the Treasury Department reported some really bad news for what had taken place in June. TIC showed selling. Massive selling, and by private foreign hands.

I wrote at the time:

This is a tremendous warning that all is not well in the global banking system. The synthetic dollar short that plagued the global asset markets starting in August 2007, creating the conditions for panic, has re-emerged in a state of stress once again. Just as the US economy, contrary to what the Establishment Survey projects through its statistical processes, is losing momentum, there is now very little room for changes in policy…

The expectation was that building off policy would be the starting point to the virtuous economic circle (including the nefarious “wealth effect”), and thus there would be little transition danger once “recovery” was entrenched. Instead, “recovery” has been lacking and policy is still the primary motivation now four full years after the Great Recession ended. The best hope for policy transition has been the Establishment Survey as a proxy for the “recovery”, but it is unconfirmed by almost every other data series.

The nature of the TIC figures, specifically, had been:

Dollar funding problems are obvious and evident in the net selling of dollar assets. The global banking system is in a synthetic dollar short position, rebuilt after the panic in 2008 thanks to central bank attempts at removing “tail risks” (or at least artificially suppressing market expectations for tail risks).

That’s all QE was “good” for, to try and placate worries as to the very real perceptions of nothing much going right. As we had observed in March 2013, too much funkiness had been going on with collateral – even Treasury had noticed, as had the geniuses running QE, and while they didn’t understand what they were seeing in the big picture, they at least knew enough was wrong to act in smaller ways.

By August 2013, the mainstream had pinned its focus on Bernanke and “tapering”, however, the upset across the eurodollar system was only growing and becoming more evident first in a currency crisis (that would prove minor compared to what followed) and then more general disturbances later on (such as Treasury yields suddenly dropping before the BOND ROUT!!! could really get started and CNY “unexpectedly” reversing right at the start of 2014).

You never want to see private foreign hands forced to sell their assets by a large amount. Not only does that describe a bad situation in the short run, more importantly history has shown it is only the beginning as it portends more destructive behavioral shifts (liquidity preferences) to come later on. For 2013, the massive selling leading to 2014, Euro$ #3, and the final devastation on the global economy.

In many places, including China and Brazil, they’ve never recovered from it. Nor has the global banking system.

An Epic Monetary Flood
Given this, anyone should’ve expected to find huge private selling in the TIC data for March 2020. Jay Powell says “we saw it coming” when that very selling retorts “the hell you did.”

But what about April 2020? Maybe you cut Jay some slack for the first half of March, the Fed perhaps a touch slow to hit the accelerator. By late March and into April, though, they were going at it full tilt. The biggest balance sheet expansion in the central bank’s history. As the Chairman told Scott Pelley of 60 Minutes last month, it was an epic monetary flood. 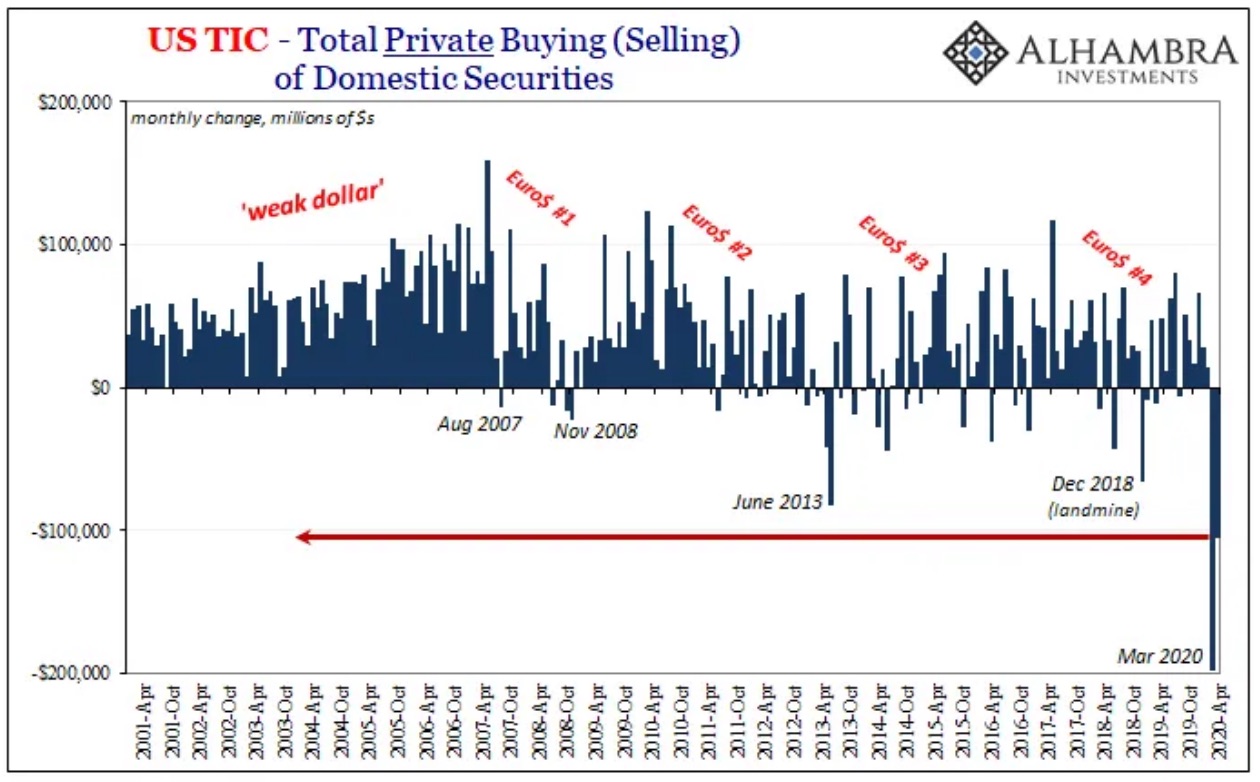 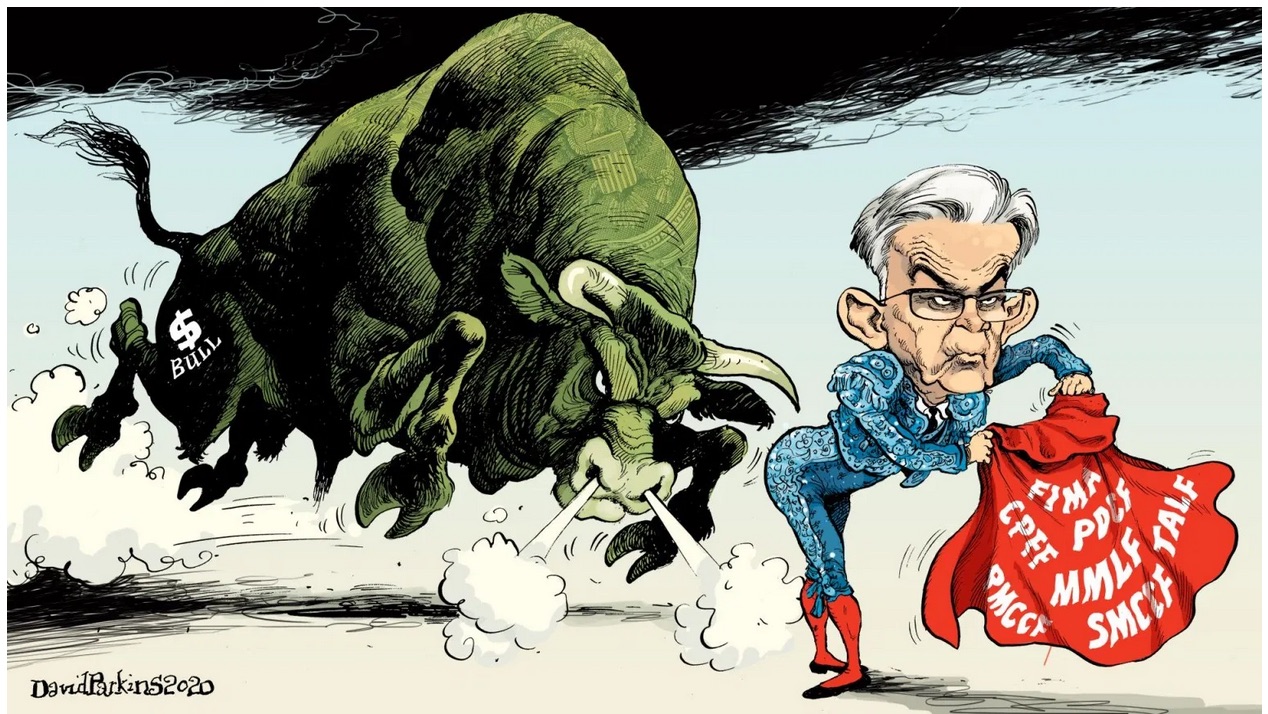 If it hadn’t been for March, April would hold the record for most private selling of US$ assets, handily beating out June 2013 with an extra $20 billion (sold) to spare. Jay Powell says he flooded the world with dollars, private foreign hands (like many if not most corporations and companies) know he’s full of it.

All Hell Is Going To Break Loose
Like 2013, outwardly it might appear as if things have settled down here in June 2020. There was six months between that June 2013 bout of private selling and the inflection in CNY and UST yields. Before then, there had been these opaque warning signs of growing disruptions in the shadows that only broke out in esoteric ways like repo collateral – at first. Each of those misunderstood and then lustily dismissed by the growing cult of Bernanke’s QE.

They all said QE had done it; the shadow system had shown, all along, that it hadn’t.

As Jay Powell’s QE regime is much larger this time, notice how, too, the private selling is likewise much larger. Two months in a row of numbers beyond compare. And, as I wrote above, history has shown this is only the beginning of behavioral changes that eventually wreak more havoc down the line.

Liquidity preferences. Logical and perfectly rational responses to what QE and bank reserves actually are. Not money.

Foreigners aren’t selling because they hate us, hate Donald Trump, or just hate the dollar. They’re selling because they’d love to be able to get their hands on some, but, despite Powell’s mythical flood, they can’t. At least they couldn’t through April when, curiously, the “flood” was at its highest stage.