The last two weeks have been filled with historic announcements that have rocked global markets.  With that chaotic backdrop in place, just days ago economist John Williams issued a dire warning about the United States.  Remarkably, it appears that his ominous prediction may already be unfolding.

On Friday shares of UPS, which is one of the largest shipment and logistics companies in the world, plunged 10 percent.  What was even more worrying was the fact that Friday's volume was 633 percent higher than the 200-day average volume.  During the panicked trading on Friday, a staggering 19.25 million shares of UPS traded hands (see massive red volume spike on the chart below). 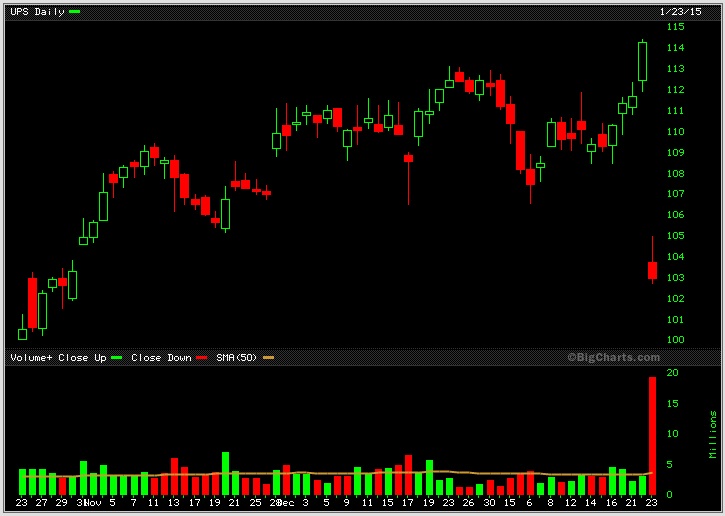 The company said they now plan to reduce operating costs, but there is a bigger question here:  Is the panic selling in UPS's stock more of a wider realization that the economy in the United States is not doing as well as the government would have people believe?

"Rising From Recession?  Strongest Growth in Over a Decade?  Not a Chance.

Well, within days the freefall in UPS's stock price appeared to verify the pessimism coming from  Mr. Williams.  We will have to wait to see how things progress from here, but for now it certainly  appears the score is:  John Williams 1, U.S. Government 0.

Williams also points out that the real unemployment figure in the United States is a jaw-dropping 23 percent.  According to Williams, the U.S. continues to have a persistent high level of unemployment,  even as December's annual money supply in the United States soared to the highest level since July of 2009.  One thing is certain, if John Williams is correct in his dire prediction, the world economy is in for a disastrous 2015. ***ALSO JUST RELEASED: John Mauldin – We Are Now Seeing A Shocking Level Of Desperation Around The World CLICK HERE.