Today one pro said games are being played in the gold, silver and mining share markets and he’s buying aggressively, plus a look at more inflation.

Games Being Played In Gold
September 29 (King World News) – Fred Hickey:  The central bankers have lost control of inflation. Germans have to deal with idiotic negative interest rates from ECB & Lagarde – which is why they’re accumulating so much physical gold. They know how disastrous inflation can be. In contrast, Western hedge funders (NY & London), most of whom have never experienced inflation (or a stock bear market) are shorting and selling inflation hedges (gold) on assumption Fed will be able to end QE printing and raise interest rates without popping bubbles they created. No chance.

When gold trend is down and hedge funds have significant short positions, they like to play a game at quarter ends I like to call: Let’s mark up our portfolios (and bonuses) by pushing them as low as possible. Seen it sooo many times. Usually ends last day of quarters or day before (today).

I’m Buying Aggressively
Typically in 1st few days of the new quarter, there’s a sharp short-covering rally (especially for miners) but sometimes it’s much more than that – the bottom. Hopefully that will be case this time. I’ve been buying aggressively this AM. If continues tomorrow, I’m ready to buy more. Always have a pit in my stomach when I do this, but since I know what I’m buying: well-run companies with clean balance sheets and in today’s circumstances also many of them high dividend payers (due to high margins and cash flows) and a great long-term outlook for gold, it’s bit easier.

More Inflation
Peter Boockvar:  Not that this is a surprise at this point but expect similar comments to litter Q3 earnings when they start in earnest in a few weeks. Sherwin Williams in cutting guidance last night acknowledged that “demand remains robust across our pro architectural and industrial end markets” but “the persistent and industry wide raw material availability constraints and pricing inflation we have previously reported have worsened, and we do not expect to see improved supply or lower raw material pricing in our fourth quarter as anticipated.”

None of us also should be surprised that Senator Warren wants Lael Brainard to be the next Fed Chair and not Jay Powell. She did get something very wrong though in calling him a dangerous man because of his approach to regulation. He instead is a dangerous man because what he and his colleagues have done with monetary policy, the widespread inflation, particularly in housing, and major imbalances and distortions ZIRP and QE helped create and their slow crawl in scaling it back…

With the rise in the 10 yr, the average 30 yr mortgage rate rose 7 bps w/o/w to 3.10%. It still of course is very low but is at the highest since mid July. Both purchases and refi’s were lower from last week, the former by 1.2% and the latter by .9%. As seen in the UoM and Conference Board consumer confidence indices, we’ve seen a sharp decline in those who believe it is a good time to buy a home and it’s clear that sticker shock is the main reason. My friend and real estate guru Barry Habib who has been dead right on housing for a while, particularly over the past year, told me it’s his belief that the rate of aggressive home price gains is about to dramatically slow its pace of gains. I agree with him but that is a good thing for the sake of affordability.

The sharp jump in global interest rates is taking a breather today with a bit of a give back that began in Asia overnight and continued to Europe. Stocks we now see are again taking their cue from rates.

One’s geography is not protecting them from the current inflation pressures. Spain today said that CPI in September jumped by 1.1% m/o/m, two tenths more than expected and by 4% y/o/y. Off the highest level since Spain started issuing inflation protected securities, the 10 yr inflation breakeven fell 2 bps to 1.69% however but only after it rose by 8 bps over the prior two days. 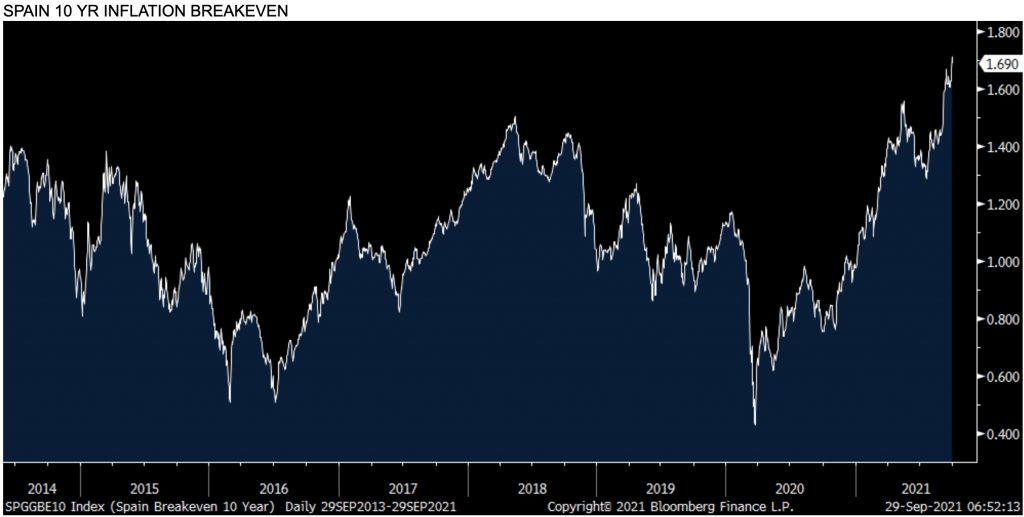 Meanwhile In Germany
German import prices in August rose another 1.4% m/o/m and by 16.5% y/o/y. Year to date they are up an astonishing 20.6% annualized. 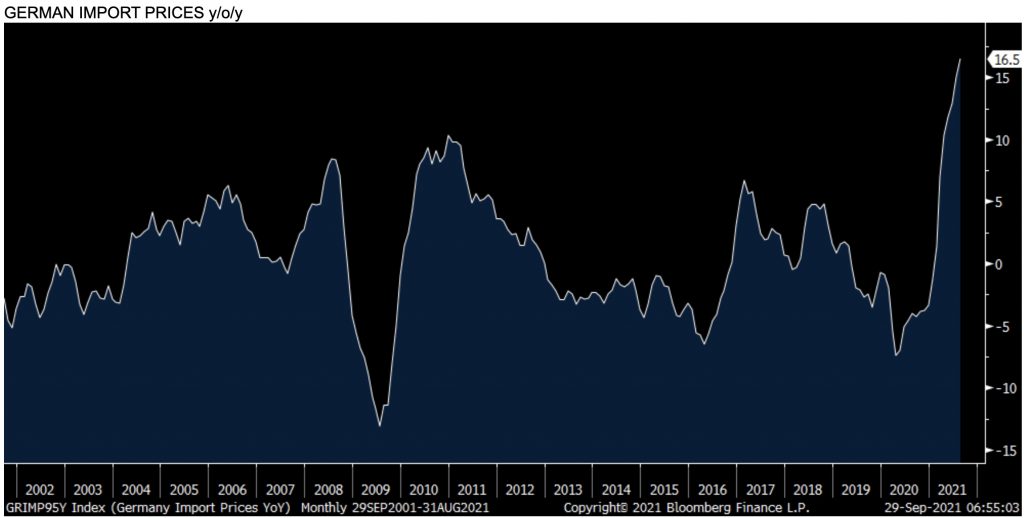 The September Eurozone economic confidence index rose a touch to 117.8 from 117.6 but that was better than the estimate of a modest drop to 117. Manufacturing held strong notwithstanding the supply challenges while services fell to a 4 month low as did retail. Consumer confidence though did improve and construction continued to strengthen. 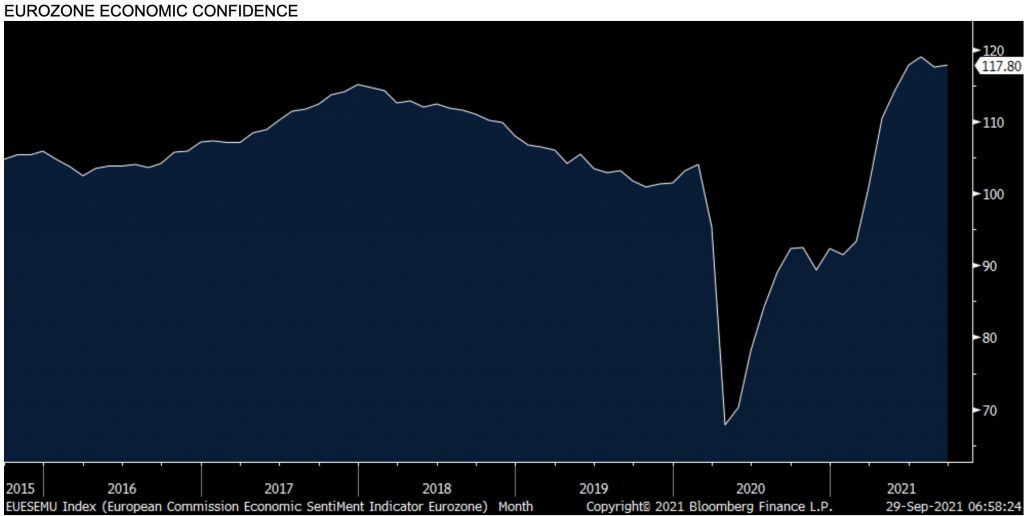