Yes, US Consumer Is Broke But There Is A Much Bigger Disaster Unfolding

Today one of the greats in the business shared with King World News some remarkable charts that show the US consumer is broke but there is a much bigger disaster unfolding.

Soft Landing Will Go Horribly Wrong
June 28 (King World News) – Eric Pomboy at Meridian Macro Research:  On May 6, 1937, German passenger airship LZ 129 Hindenburg burst into flames as it attempted to dock at Naval Air Station Lakehurst in New Jersey. According to eyewitness accounts, the initial fire broke out just above the rudder fins before engulfing the 800-foot vessel as it plummeted to the ground. It was a routine ‘soft landing’ gone horribly wrong.

Should the Fed push too far with its tightening plans, an equally disastrous spectacle awaits asset prices, much less an economy on the verge of recession. With the Fed effectively doubling the pace of a typical rate hike cycle (coupled with balance sheet reduction), the probability of a disorderly market decline in the not too distant future is rising…

As debt levels rise, the rate hike ‘ceiling’ loses altitude (the level at which the market and economy buckle under the weight of tightening financial conditions). Following the 75bp hike last week, we have officially pushed up against this ceiling. Chart: domestic debt has risen $12.2 trillion over the last 9 quarters (2020-present) to a record $66.7 trillion, more than 2x the increase of the 9 quarters through Q1 2006 (see: housing bubble). Rising rates are pure kryptonite to asset prices especially with debt and leverage at such levels. As the Fed shifts from supporting asset prices to combating inflation, we should expect the market to continue lower. 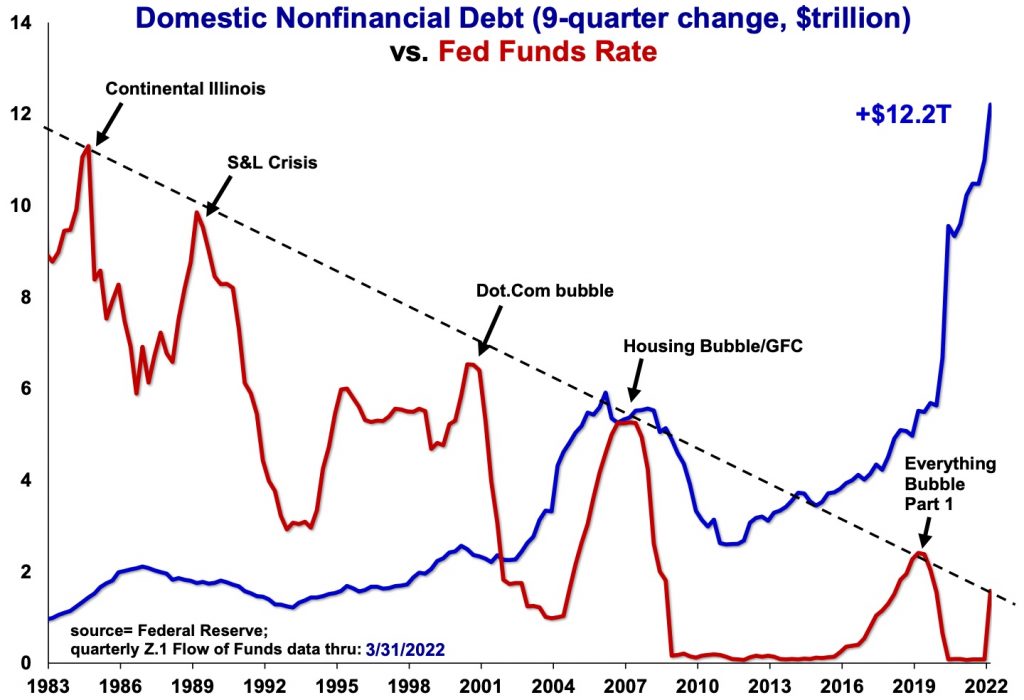 It’s Still A Bubble: following the S&P 500’s worst weekly decline since March 2020, we find the Price/Sales Ratio has tumbled all the way back to…wait for it…dot.com bubble territory. In short: the tip of the iceberg has melted away, leaving the main bubble exposed. Given the Fed has signaled its intention to double the FFR to 3.5% by year-end, there is every reason to believe the selling is not over. 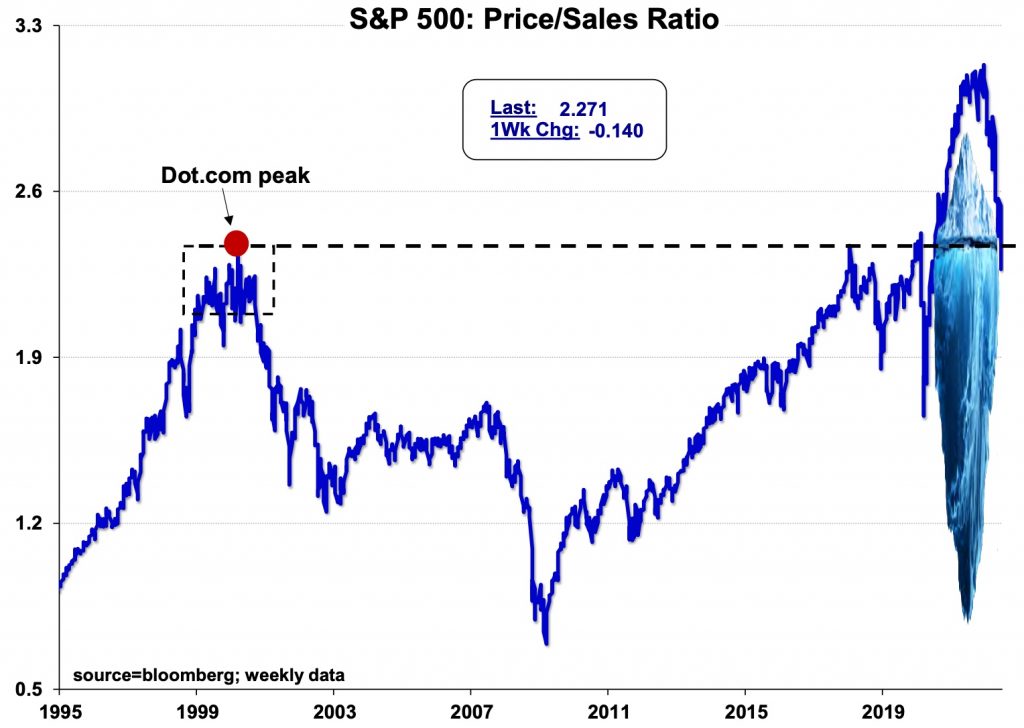 All eyes on mega-cap stocks. In mid-January as the market began to wobble (as we suggested it would in anticipation of rate hike kickoff), we highlighted the chart below. A month ago, top 25 stocks by market cap accounted for a record 36% of total US exchange market cap (has pulled back slightly to 34.8% as of Friday). These stocks have accounted for the bulk of market gains for many years, and as we noted back in January: Such concentration of risk in such a small basket of names is no doubt cause for concern as not only is it unsustainable….but will surely act as downside propellant should investors, all in the same crowded trade, attempt to exit positions through the same keyhole at the same time. The market decline has thus far been relatively panic-free, yet should the bubble really begin to burst, an accelerated exodus from the mega-cap favorites could very well lead to a disorderly market decline. Chart: Top 25 stocks by market cap are still 25% above Feb. 2020 levels while All Other stocks are just shy of unchanged. 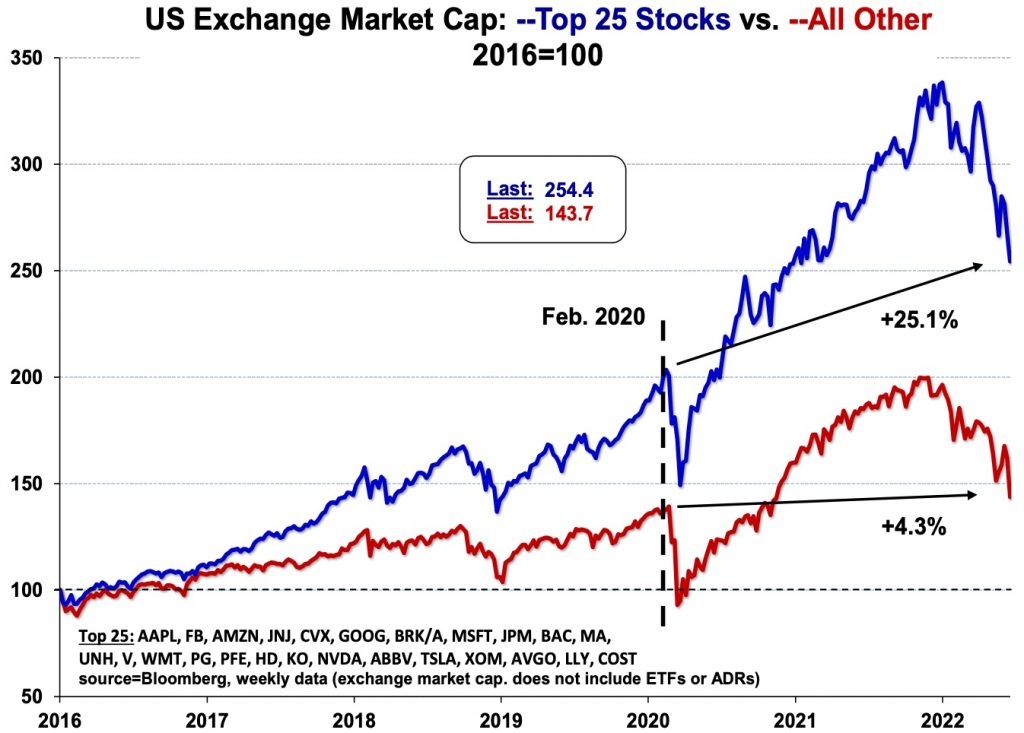 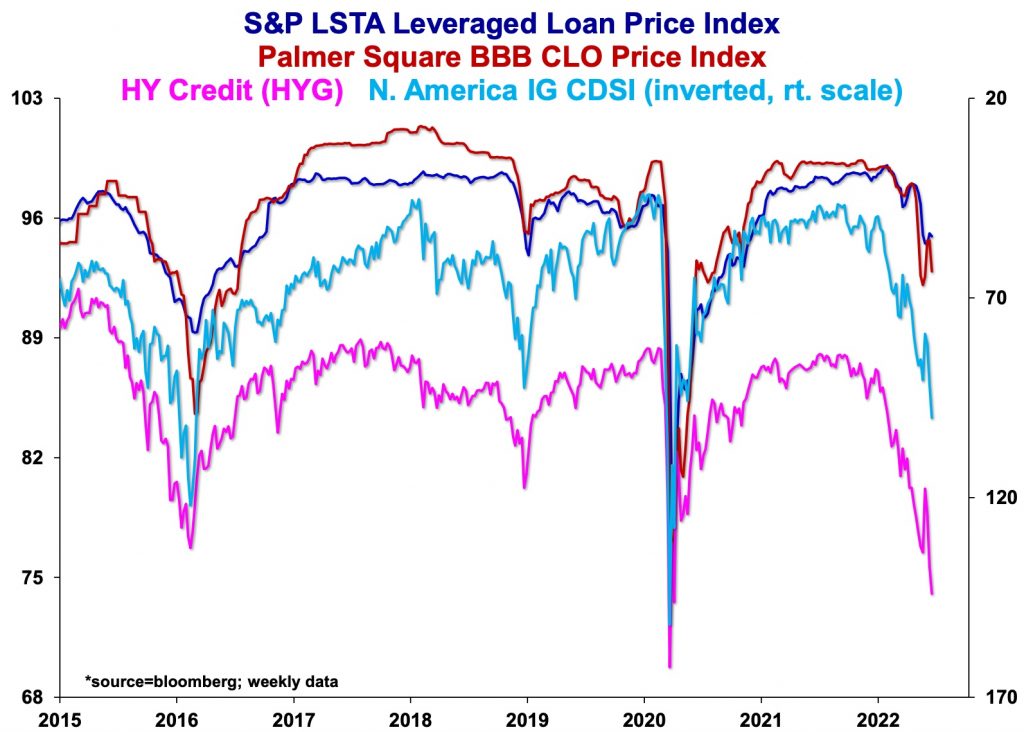 Consumer headwinds intensifying. Rent + Food + Gas expenditures (using median asking rent data from Census Bureau) are eating up a record 41% of average annual incomes, thus the near record negativity regarding personal finances (lowest reading since 1980). If we use latest national average rent data from Redfin ($2000/mo for a 1br), these mandatory outlays are taking a record 56% bite of annual income. 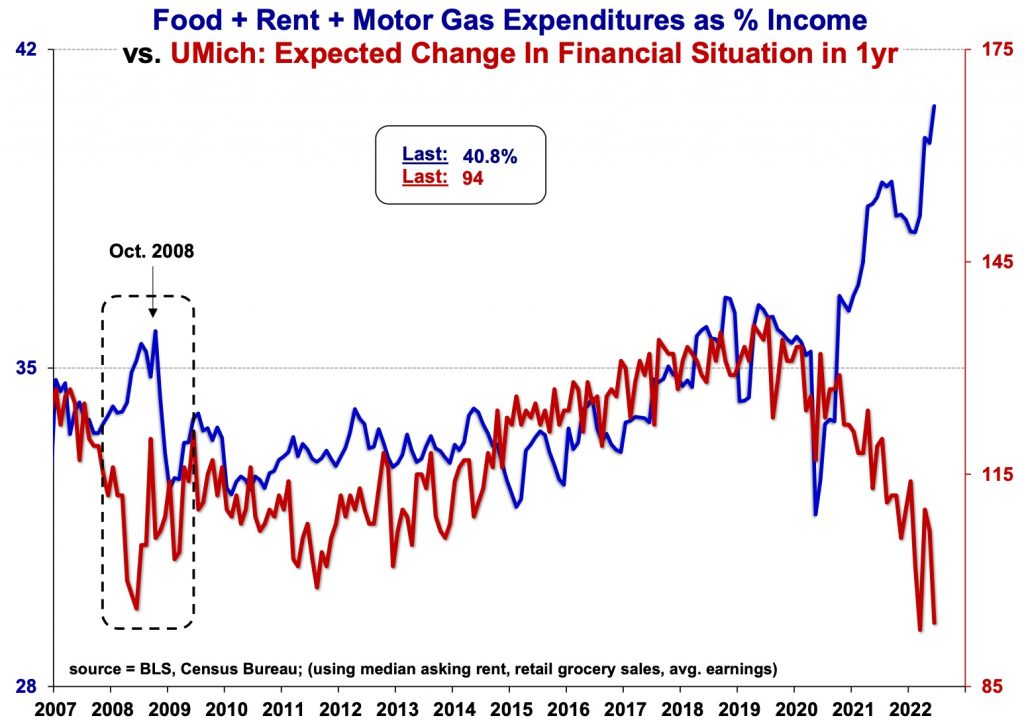 Real Average Weekly Earnings have crashed below long-term trend. This is a very troubling situation for the consumer, leaving little choice but to break out the plastic in order to fill the inflation-income gap…which has sent Revolving Credit to record high. 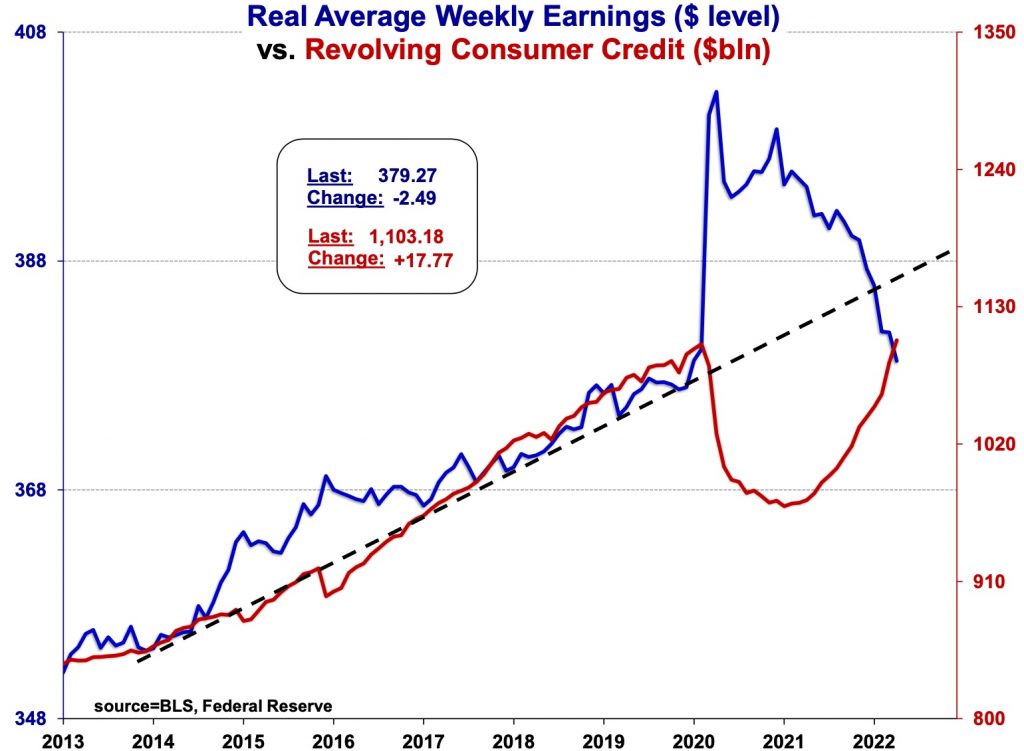 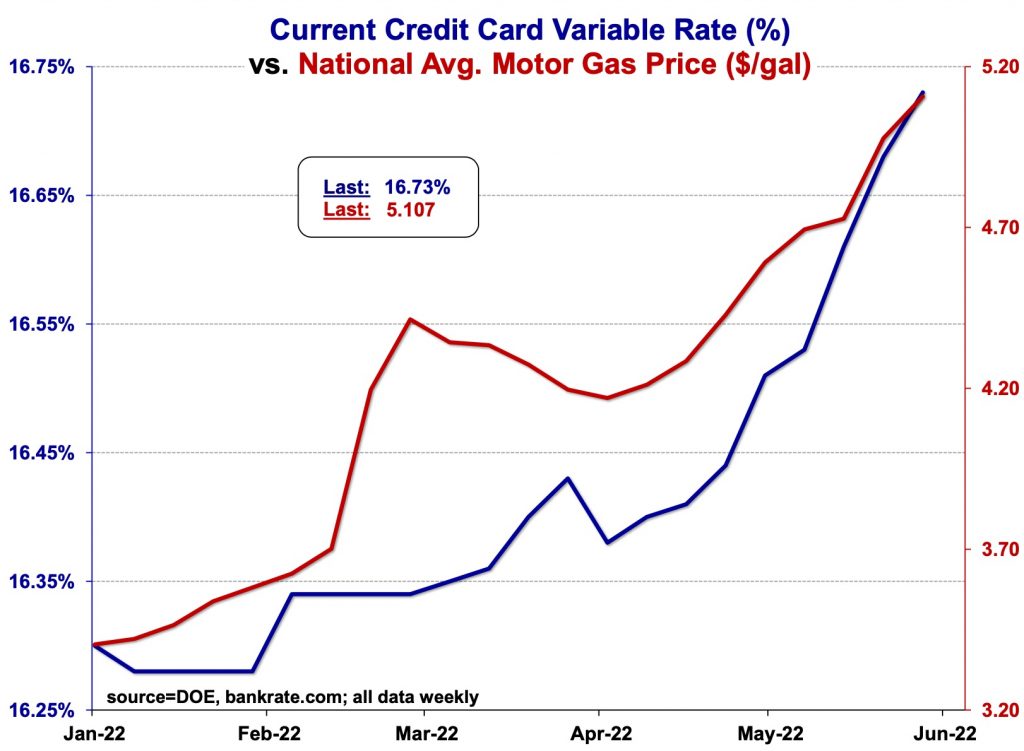 Following the disappointing May retail sales data, Atlanta Fed ‘GDP Now’ forecast showed we may be in technical recession with a -0.002% reading. Digging in to the report: overall PCE forecast was revised lower by a full point to 2.62%, led by Goods PCE which saw a significant revision lower to -2.2% from +0.95%. Real Earnings are also pointing to consumer-led recession: 2-qtr change in Total Private Sector Real Annual Earnings are on the verge of 2nd straight negative reading, which has not happened outside a recession. (latest reading is Q2 estimate based on data thru May). 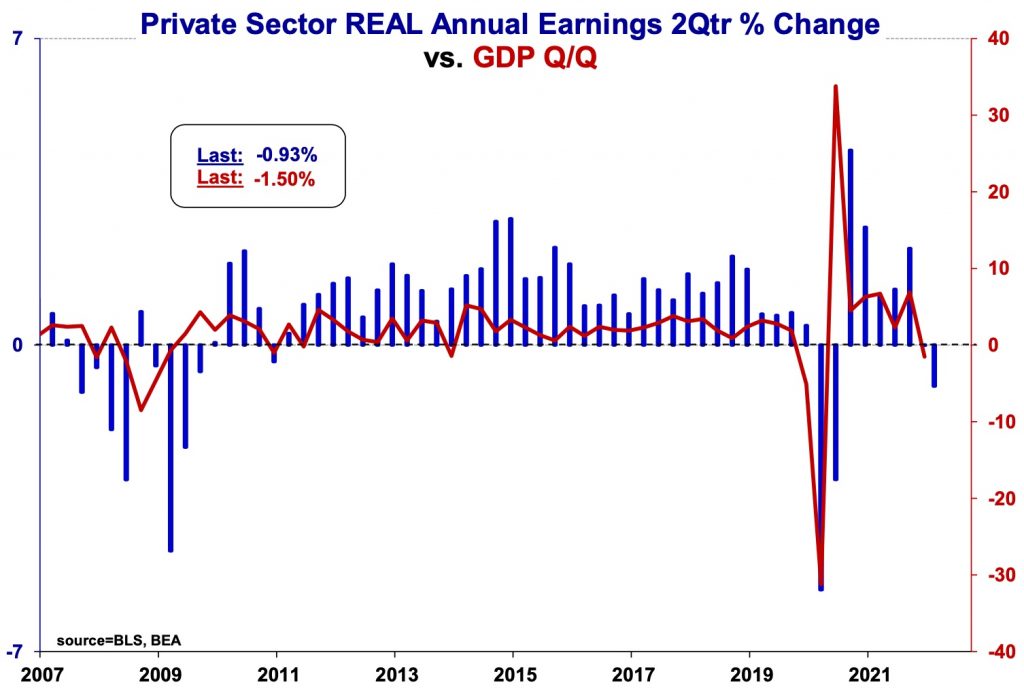 Given Fed tightening is just getting underway, we are likely still in stage 2 of what is a typical 3-stage (recessionary) market drawdown. While the downturn has so far been rather orderly and panic-free, this could soon change as the probability of a ‘soft landing’ all but disappears. Last week, Powell stated: “The US economy is very strong and is well positioned to handle tighter monetary policy”. All evidence to the contrary. With the Fed pledging its “unconditional” commitment to restoring price stability, their ‘wealth effect’ transmission mechanism will be thrown in reverse…meaning the bubble will continue to pop until the Fed steps back in.