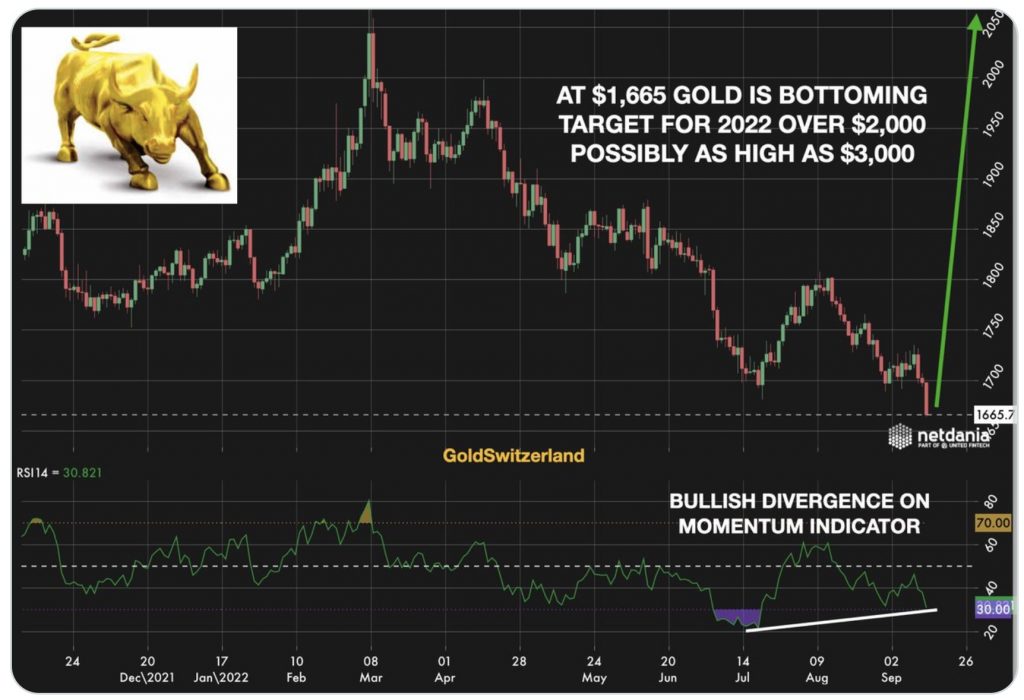 Junior Mining Stocks
Graddhy out of Sweden:  Let’s see if this double support backtest holds for GDXJ. If it does, I think that the orange reverse symmetry move back up could be in play.

GDXJ May Have Finally Bottomed 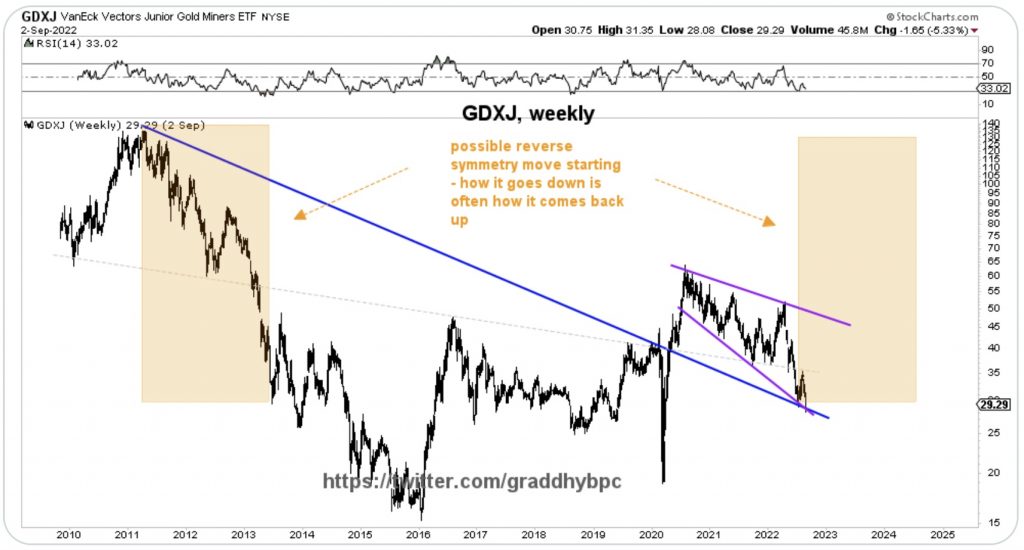 With respect to the SNB, because some thought they would hike by 100 bps, the Swiss Franc is selling off sharply in response, by 1.6% vs the dollar and by 2% vs the euro (biggest one day drop in 7 yrs). Also, while the SNB is now out of NIRP, Governor Jordan is still a believer in the experience as he said today that they could return there if needed. At least Jordan is taking no lessons learned from the inflation mess they all contributed to.

Intervention Will Fail
The Bank of Japan did nothing as expected and one has to wonder if it’s not just stubbornness on the part of Kuroda rather than a rational policy at this point. The yen sold off initially but for the first time since 1998, the Finance Ministry intervened and bought yen and below is the intraday chart on it. Intervention failed miserably in 1998 and it will again this time. 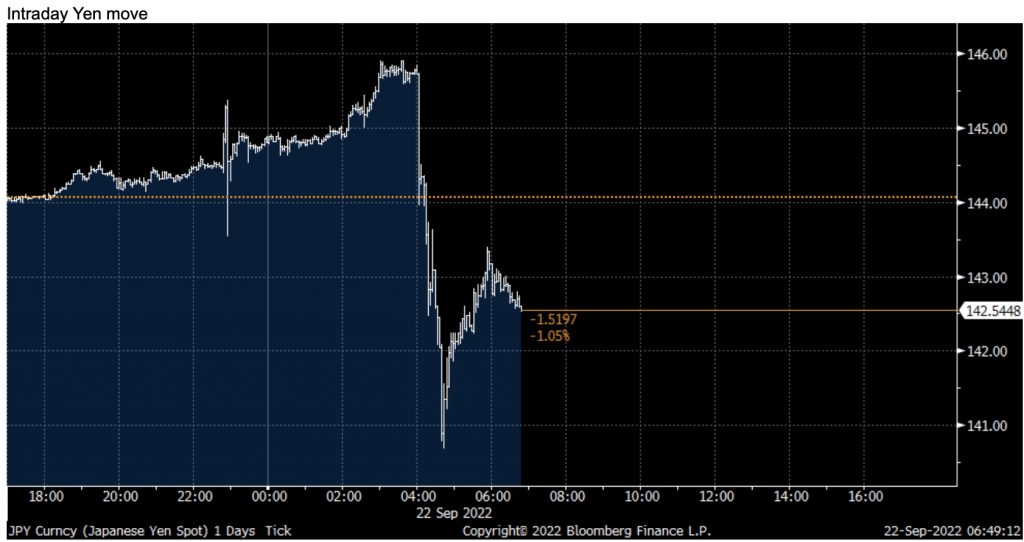 The Finance Ministry said they “will take necessary steps against any excessive moves in the Forex market.” On the decision to stand pat on policy, Kuroda said “There’s absolutely no change to our stance of maintaining easy monetary policy for the time being. We won’t be raising interest rates for some time.” And, “We will take additional easing measures without hesitation, if necessary.” Amazing that he still thinks it matters.

In response to the stand pat monetary policy, the 10 yr JGB yield fell 2.2 bps to just under .24%. The 40 yr yield was down by almost 2 bps. The FX intervention has the dollar down against many other currencies too but also because of all the central bank hikes that followed the Fed…

Meanwhile In England
While the BoE hiked by the 50 bps to 2.25% that was mostly anticipated, some thought that they would go 75 bps and 3 BoE members voted to do so. One actually wanted just 25 bps. The pound is trimming its rally as we didn’t get the 75 bps but is still up a touch. The 2 yr yield is up by 10 bps to 3.49% but a few bps off its intraday high of 3.51%. Interestingly too, the BoE said they will start the outright sales of gilts beginning on October 3rd and that is why gilt yields across the curve are higher on the day. The 10 yr yield is up by 10 bps too on the day.

In the BoE statement, they said that inflation could peak at 11% in October rather than the 18% previously forecasted because of the Energy Price Guarantee initiative implemented by the new PM. The lack of more aggressiveness from the BoE is because of the dance they are trying to do with not slowing the economy too much while it absorbs the energy price challenge. They also seemed to have taken comfort in that Energy Price Guarantee.

The outlier, outside of the BoJ, continues to be the Turkish central bank who in the face of 80% inflation, aka hyper inflation, cut its overnight rate by 100 bps to 12%. And not surprisingly the Turkish lira is lower again as Erdogan seems intent on destroying the standard of living of his citizens all because he doesn’t like high interest rates.

Recession Indicator
As the US market’s attention has shifted to the economic consequences of the rapid pace of monetary tightening, the 2s/10s spread is inverting further today by 4 bps to 57 bps. 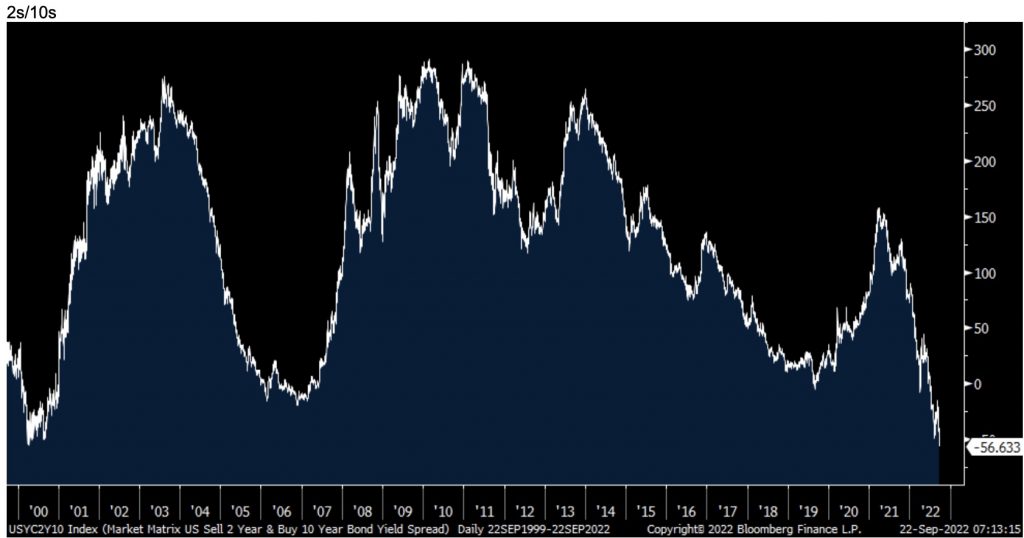 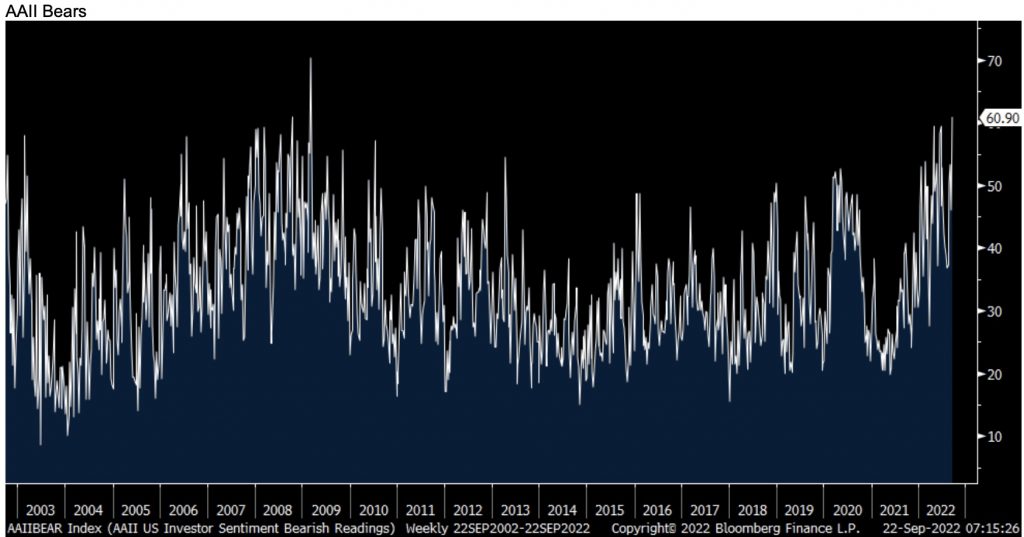 Yesterday, Investors Intelligence said Bulls fell to 30 from 32.4 while Bears rose to 31.4 from 28.2. The CNN Fear/Greed index closed yesterday at 31 vs 40 one week ago. Bottom line, strictly from a contrarian standpoint, the AAII data is pointing to a market bounce because of the extreme read. We are only talking though short term because sentiment data is so fickle.

French Nuclear Energy Paying Off
The only data point of note overseas was French business confidence in September fell 2 pts m/o/m to 102 as expected. Confidence declined in manufacturing, services, retail and wholesale trade. The employment component rose while construction was unchanged. Overall confidence is at the lowest since April 2021 but France will get thru the winter much better than Germany and some others because of their high energy contribution from nuclear. 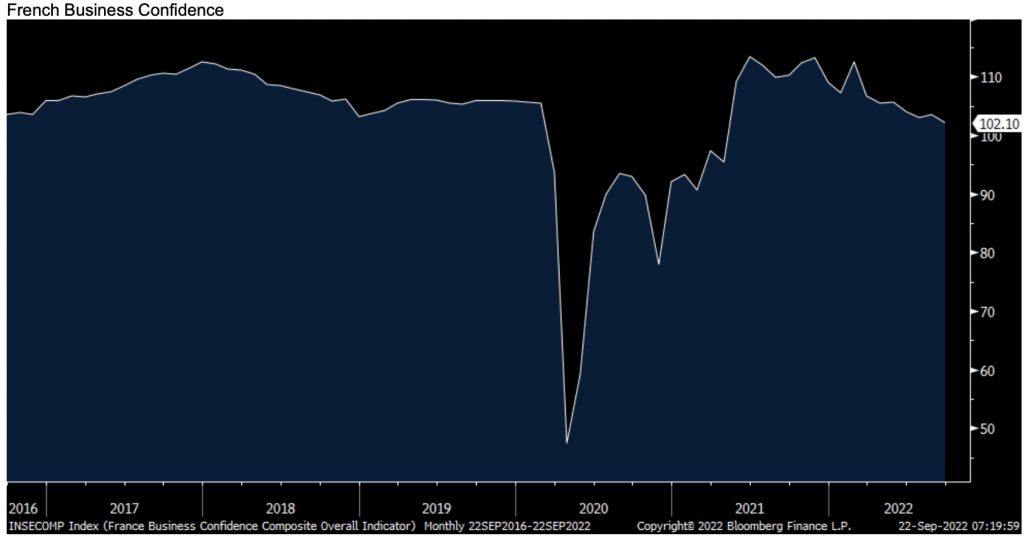 Is The Correction In The Metals Over?