With continued uncertainty in global markets, today a legend in the business warned about the depletion of China’s massive reserves and a potential derivative nightmare in the crude oil market.

***KWN is about to release an interview with the man who is a top advisor to the most prominent sovereign wealth funds, hedge funds, and institutional funds in the world.  But first, there are worries about the depletion of China’s massive reserves. 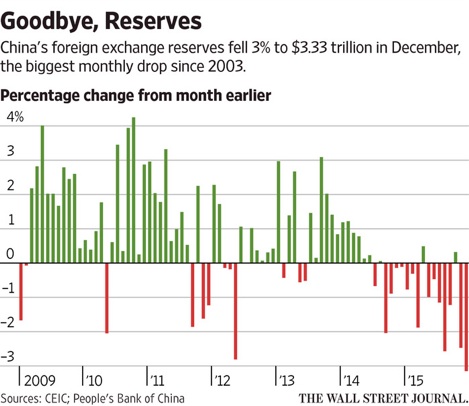 Here is a portion of today’s note from Art Cashin:  How Fast Are China’s Reserves Shifting – China has a huge pool of foreign currency reserves but recent moves to defend the yuan are hemorrhaging them out the door. Here are a couple of bits from a Bloomberg column on the topic:

China’s $3 trillion-plus in foreign currency reserves, the biggest such stockpile in the world, would seem to be a gold-plate insurance policy against the country’s current market chaos, a depreciating currency and torrent of capital leaving the country.

Maybe not, say economists. First off, data point to an alarming burn rate of dollars at the People’s Bank of China. The nation’s stockpile of foreign exchange reserves plunged by $513 billion, or 13.4 percent, in 2015 to $3.33 trillion as the nation’s central bank coped with a weakening yuan and an estimated $843 billion in capital that left China between February and November, the most recent tally available according to data compiled by Bloomberg.

“My greatest worry is the fast depletion of foreign exchange reserves,” said Yu Yongding, a member of China’s monetary policy committee when the currency was revalued in 2005.

True, trillions of dollars under the central bank’s care are thought to be invested in safe liquid securities, including Treasury bonds. The U.S. measure of China’s holdings of Treasuries, the benchmark liquid investment in dollars, stood at $1.25 trillion in October, according to the U.S. Treasury Department, which cautions that the figures may not reflect the true ownership of securities held in a custodial account in a third country.

The decline in reserves accelerated from August, when China made a surprise devaluation to the yuan and said it would allow the market a greater say in setting the currency’s value. Authorities followed up in December by flagging a loosening of the yuan’s links to the dollar and said its strength would be judged against a basket of currencies.

The yuan’s weakness comes as the $10 trillion-plus economy likely grew by its slowest in 25 years years in 2015 and as the nation’s markets suffer their worst start to the year in two decades. Trading on the CSI 300, down 10 percent this week, was suspended twice this week as heavy selling triggered a circuit breaker.

The drop in the nation’s foreign reserves over 2015 was the first since 1992, ending a 22-year ascent that began under former top leader Deng Xiaoping in an effort to keep a floor under the tumbling yuan. They fell by $108 billion in December alone.

“Where is the line in the sand, and what happens when we get there?,” said Charlene Chu, the former Fitch Ratings Ltd. analyst known for her warnings over China’s debt risks and now a partner of Autonomous Research Asia Ltd. “China’s large hoard of foreign reserves gives the country considerable power and influence globally, and I would think they would want to protect that. If there is such a line in the sand, it is very possible we hit it in 2016.”

To be sure, intervention isn’t the only thing dragging China’s reserves lower. There’s also a valuation impact from fluctuating currencies. Some of the fall may also reflect authorities accounting for its investments. Chu reckons much of the decline up to June 2015 was mostly due to investments in illiquid assets and valuation changes rather than capital outflows.

Some experts think a reserve drop to $2 trillion could set off alarms and badly spook markets.

Overnight And Overseas – Shanghai was up the Dow equivalent of 300 points amid rumors that the government was a big, big buyer of stocks. Separately, and more importantly they marked the yuan higher. European markets opened higher but gave back most gains by midday. Gold is softer and oil is mixed.

Consensus – With China on pause, I suspect crude will be at center stage. A break below $32 could bring on follow-up selling due to some derivative associations. Stay wary, alert, and very, very nimble. Have an absolutely wonderful weekend! You deserve it. ***KWN is about to release an interview with the man who is a top advisor to the most prominent sovereign wealth funds, hedge funds, and institutional funds in the world.

***ALSO JUST RELEASED:  We Just Witnessed Something Not Seen Since The 2008 Collapse CLICK HERE.