With markets awaiting the interest rate decision, here is what you need to know ahead of tomorrow’s Fed rate hike.

Here is what Peter Boockvar wrote today as the world awaits the next round of monetary madness:  The February NFIB small business optimism index moderated a touch to 105.3 from 105.9 in January and vs 105.8 in December. It still though is pretty much holding its gains post election where the October print was 94.9 and November saw 98.4. There is one very important component that has not seen any improvement and that is plans for Increased Capital Spending which stands at 26% vs 27% in January and 27% back in October. This number touched 40 multiple times in the late 1990’s and the mid 30’s in the mid 2000’s. Likely companies are still waiting for what the tax reform will look like or maybe with capacity utilization sitting at 75% vs the historical average of 80% we still have an easy money driven overcapacity overhang…

Looking elsewhere within the report saw Plans to Hire fall 3 pts to 15%, the same level as November but up from 10% in October. Plans to Increase Inventory rose 1 pt to 3% but that’s not much different than the 2% seen in October. Expectations is where the real optimism still is as those that Expect a Better Economy sits at 47%, down 1 pt m/o/m but up from -7% in October. Those that Expect Higher Sales dropped 3 pts to 26% but was at 1% in pre election. Those that said it’s a Good Time to Expand was down by 3 pts to 22% but higher by 13 pts post election. The Positive Earnings Trends component fell 1 pt and still remains negative at -13% but up 8 pts from October.

Inflation
On the inflation front, Higher Selling Prices was up 1 pt to 6% which matches the highest since December 2014 and up from 2 in October. On the wage side, current Compensation Plans fell 4 pts to 26% after rising by 4 pts in January and not much different than the 25% seen in October. Future Compensation Plans also hasn’t changed much as it sits at 17% vs 19% in October and 14% in September. There remains the issue of finding qualified employees as job openings Not Able to Fill is at the highest level since December 2000 which provides hope that wages will improve from here.

To this last point, the NFIB said “Many small business owners are being squeezed by this historically tight labor market. They are not confident enough to raise prices on consumers, which limits how much they can increase compensation and makes them less competitive in attracting qualified applicants.” This also helps to explains the very low level of jobless claims. The NFIB said the 2nd biggest problem of small business is “finding qualified labor”, ahead of regulations, weak sales and insurance costs. Taxes is the top problem.

Reflecting the rise in LIBOR which sits at the highest level in 8 years, “The percent of owners reporting paying higher interest rates on their last loan jumped 7 pts to 11% in January and held at 9% in February, after averaging less than 2% since the recovery started in 2009.”

Hope
Bottom line, hope is what has driven the optimism but actual economic improvement has been more modest. The NFIB CEO made clear that “The sustainability of this surge and whether it will lead to actual economic growth depends on Washington’s ability to deliver on the agenda that small business voted for in November. If the health care and tax policy discussions continue without action, optimism will fade.” We will get this reform in some fashion I’m very hopeful but the market expectations bar is very high.

With the US 10 yr yield sitting at its highest level since September 2014 at 2.62%, Bill Gross we know is of the opinion that this is the breaking point that separates the end of the bond bull market or not (I believe it’s over and my readers know I’ve been saying that since August/September). This is a visual on why he likely thinks so: 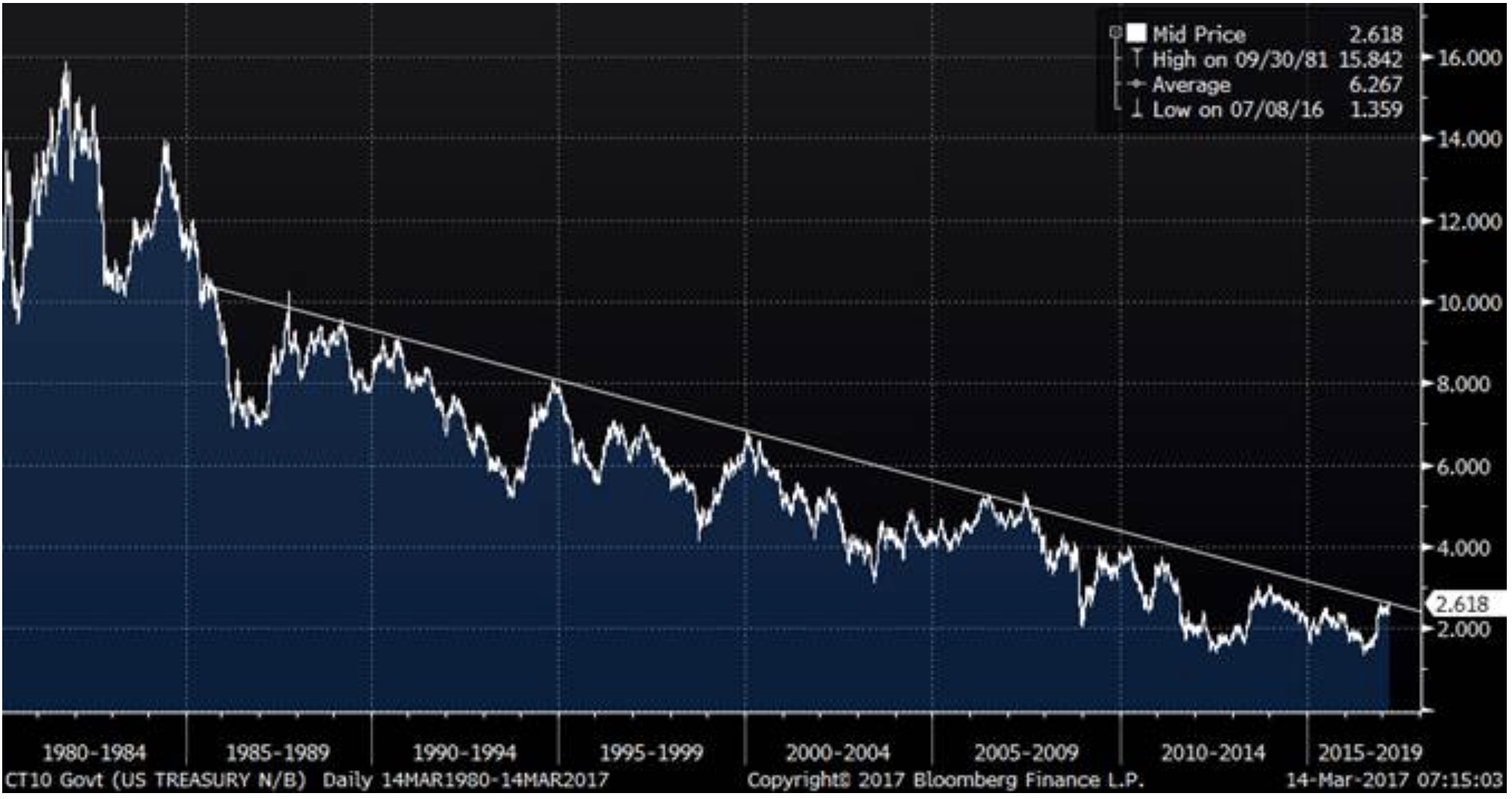 We saw some mixed data out of China overnight where authorities combined the January and February levels in order to take out the Lunar holiday distortion. Retail sales in February ytd rose 9.5% y/o/y, below the estimate of 10.6%, down from 10.4% seen in December and the slowest pace of gain since December 2003. The blame is being attributed to a drop in auto sales y/o/y because of a new tax on small cars and off a higher base last year. Industrial production grew by 6.3% ytd y/o/y, a hair above the estimate of 6.2% and up from 6% in January. Also out was fixed asset investment ytd y/o/y which grew by 8.9%, a quicker pace than the 8.3% that was forecasted. Bottom line, fixed private investment and property continued to lead the Chinese growth but I’ll say for the umpteenth time, I have no idea what’s temporarily stimulus driven and what is organic. The Shanghai comp was unchanged but the H share index was higher by .6% after jumping by almost 2% yesterday.

Of note in Europe was the German ZEW March economic confidence expectations index rose to 12.8 from 10.4 last month, vs 16.6 in January and about in line with the estimate of 13. It stood at 6.2 in October. Current conditions did match a nearly 6 yr high. The comments from ZEW were somewhat mixed: “The fact that the ZEW Indicator of Economic Sentiment only shows a slight upward movement is a reflection of the current uncertainty surrounding future economic development. With regard to the economic situation in Germany, no clear conclusions can be drawn from the most recent economic signals for January 2017. While industrial production and exports witnessed a positive development, the figures for incoming orders and retail sales were less favourable. The political risks resulting from upcoming elections in a number of EU countries are keeping uncertainty surrounding the German economy at a relatively high level.” We can add the possibility of a BAT tax in the US to the list of uncertainties for German exporters. The euro is down a touch with the DAX flat.

Ahead Of Tomorrow’s Rate Hike
Ahead of the Fed hike tomorrow we see PPI today and CPI tomorrow. The energy driven headline number is expected to result in a 2.7% print tomorrow. I include one more chart before we hear from the FOMC. It is C&I loans and we can see clearly that they’ve plateaued here. Why? I’m not exactly sure yet. 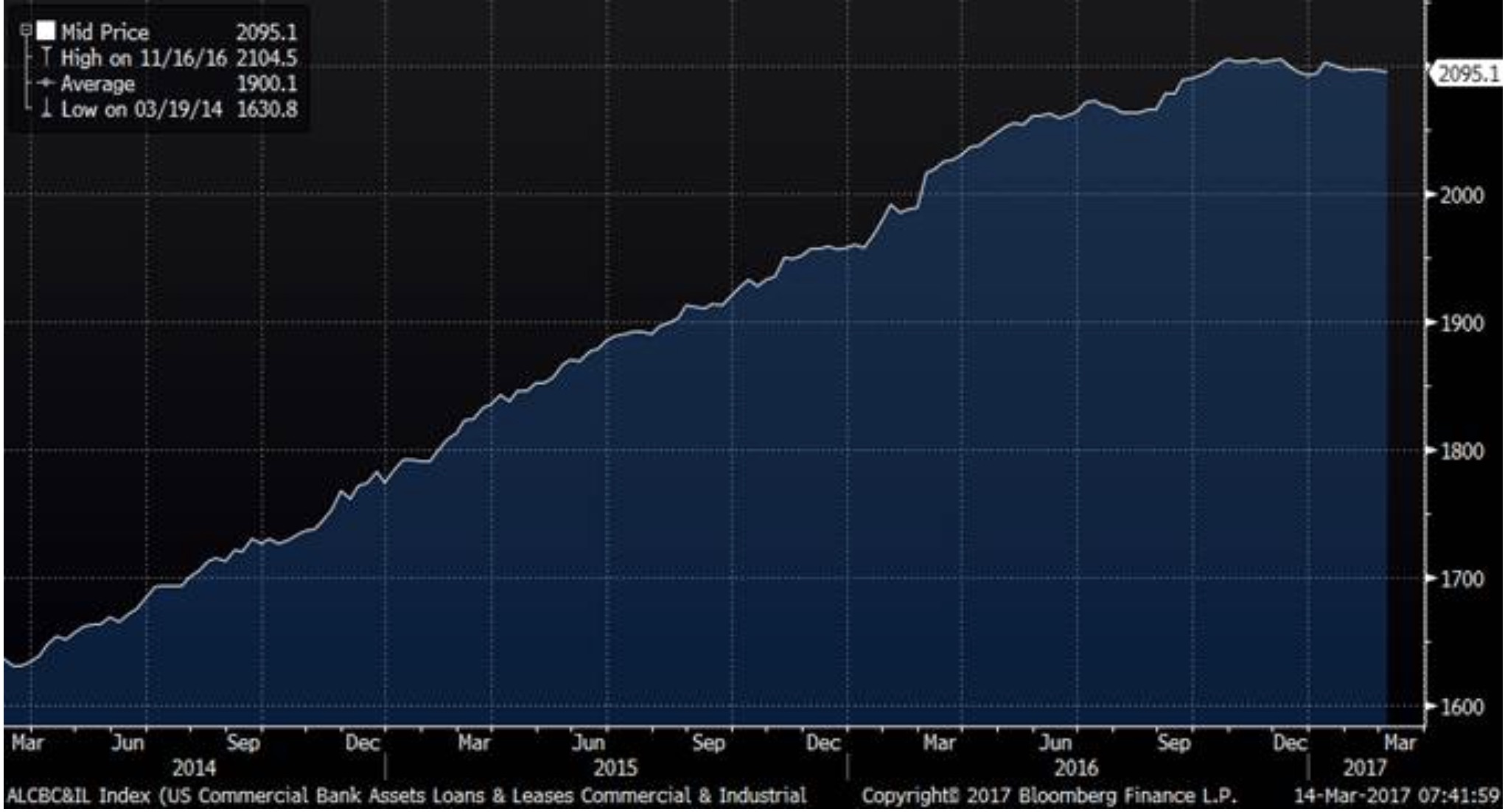