Today one of the greats in the business said the long term case for gold has strengthened in light of the current chaos and that the recent headwinds will not persist.

Gold Troubled But Headwinds Unlikely To Persist
March 17 (King World News) – Ole Hansen, Head of Commodity Strategy at Saxo Bank:  Gold’s failure to rally over the past few weeks, as the Covid-19 spread and economic uncertainty rose, has brought back memories of the 2008 Great Financial Crisis. During the early part of the 2008-09 crisis all assets were sold as a result of the need to deleverage in order to realise cash or pay for losses elsewhere. In the early weeks of the crisis gold suffered a 27% sell-off to $725/oz before beginning the ascent which eventually took it to $1920/oz…

The rally started in gold mining stocks before moving to gold and it took another few months before the stock market finally bottomed out. With this in mind we are keeping a close eye on gold mining stocks, through the Vaneck Major Gold Miners  ETF (Ticker: GDX:arcx). Yesterday it slumped to a 49% loss from the February peak before recovering to finish the day higher up by 18.5%.

GDX Had Collapsed 49% From Its February
Peak Before Rallying Strongly 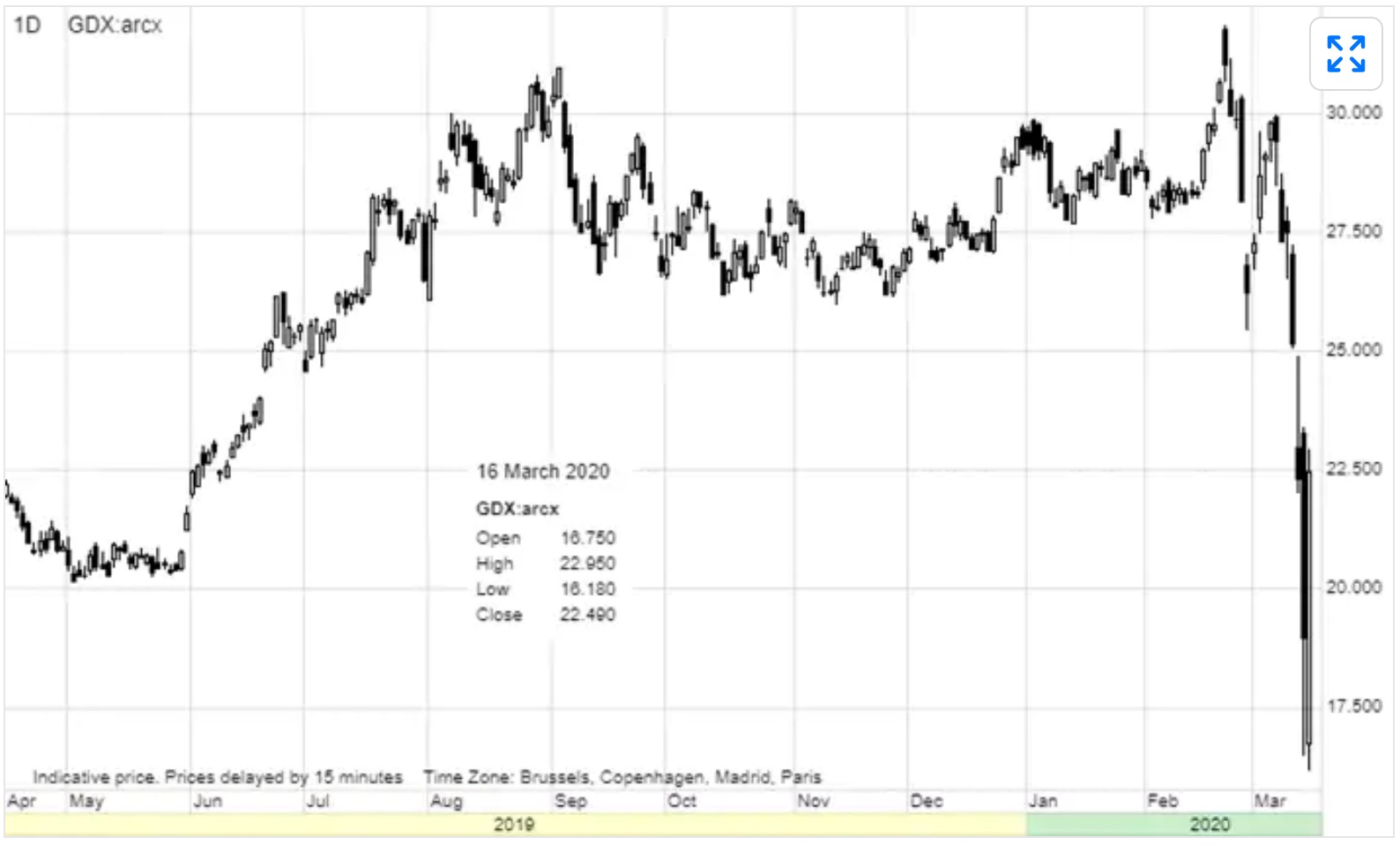 Whether the low is in remains to be seen but the sharp recovery indicated that buyers had been waiting for the opportunity. While gold has fallen we also have to keep in the mind that the cost of fuel, which account for 20% of the mining cost, has collapsed. Gold miners have therefore, at least for now, not suffered the hit that the drop in gold would otherwise imply.

Gold has now been through a 15% top to bottom sell-off before – at least for now – once again finding support at $1450/oz. The correction has obviously once again raised the question of whether gold is worth it’s tag as a safe-haven and diversifier. We believe the long term reasons for holding gold has if anything been strengthened by current developments. 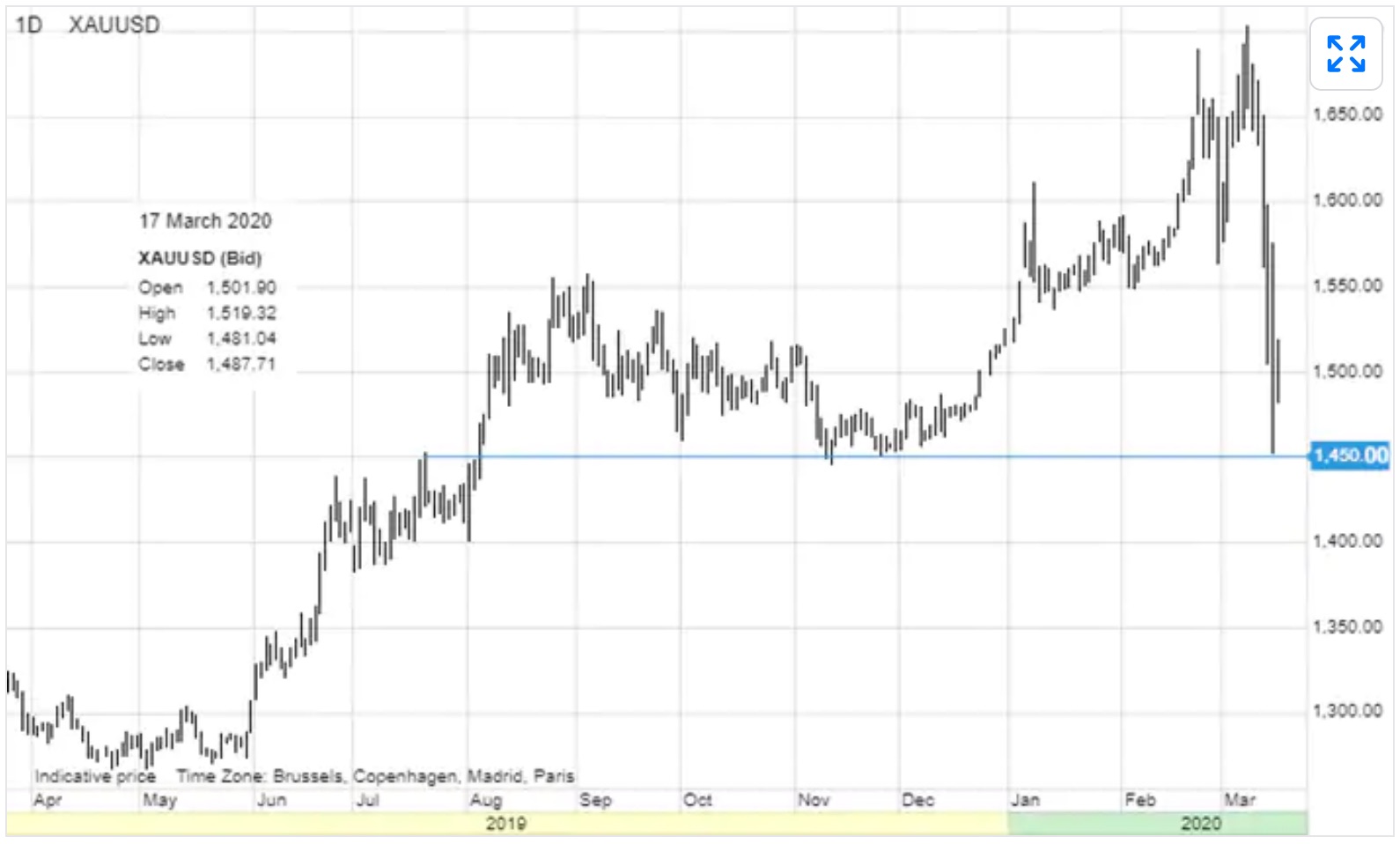 While official interest rates have been slashed,  corporate bond yields have been rising. The broken transmission between central bank actions and developments on the ground is likely to trigger a major fiscal and potential inflationary response from governments around the world. US 10-year real yields, another major driver of gold has risen sharply during the past week in response to much lower inflation expectations. We believe this direction is unsustainable and that real yields eventually will move back into a deeper negative territory (see chart below).

US 10-Year Real Yields Unsustainable, Will Head
Back Into Negative Territory Bolstering Gold 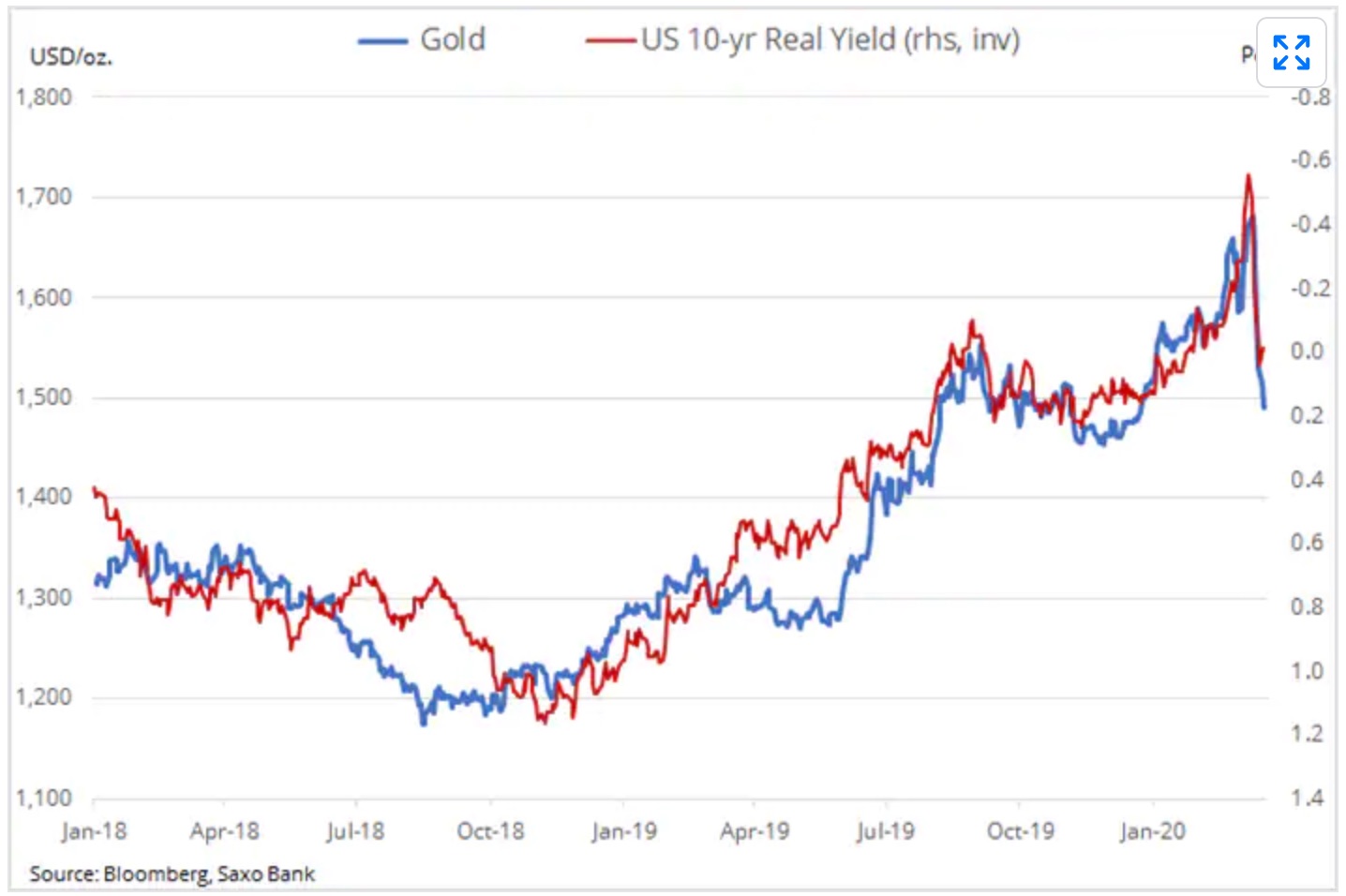 The sell-off has also been amplified by the aggressive sell-off in crude oil. The Russian central bank has been a strong buyer of gold in recent years. That buying has now stopped and depending on how long it will take before crude oil recover we could potentially see Russia become a net-seller. This in order to cover the shortfall after the price of oil slumped below their budge breakeven which is somewhere close to $40/b.

However, as mentioned, the main driver behind gold’s recent weakness has been the “dash for cash”. A move that was strengthened by the elevated leveraged positions that had been built up in gold during the past few months. In my latest COT report covering the week to March 10 I highlighted how deleveraging had become the overriding theme with both long and short positions being reduced. The biggest long reductions were seen in crude oil, gold, sugar, cocoa and cotton while short-covering was seen in natural gas, soybeans and corn.

The open interest in COMEX gold futures has dropped to 573,00 lots, the lowest since last July. A sign that positions, both long and short have now seen a significant reduction from the January peak at 800,000 lots.

Open Interest In Gold Has Plunged 573,000
To Lowest Level Since July 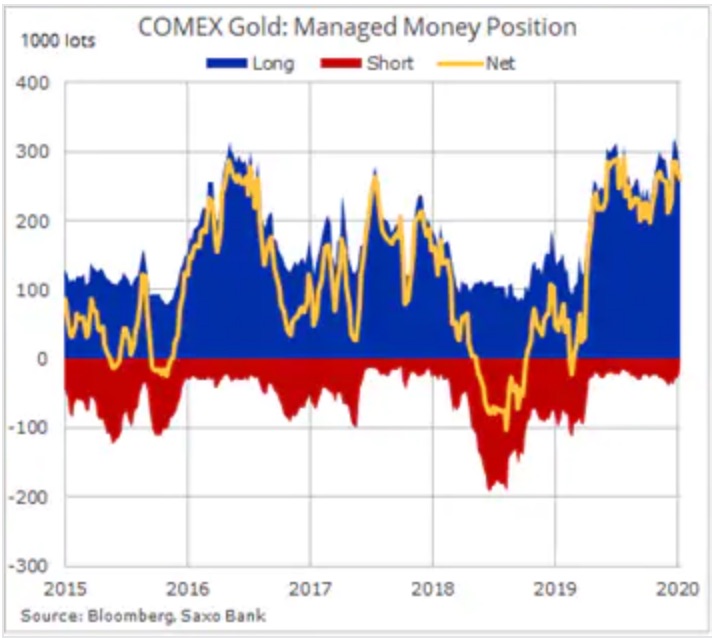 The difficulty in fully understanding the sudden weakness and temporary loss of safe haven status have raised some concerns that the link between cash and paper is under pressure. While paper gold has seen a significant amount of selling the cash market has reacted to developments across the different regions. Discounts have been offered in Asia and India while dealers in Dubai have noticed a premium in recent days. Overall we conclude that the Covid19 has triggered a significant disruption to supply chains and logistics. Major buyers have temporary close down their borders while others have witnessed a slump in demand. Against these developments the supply chain is also severely stressed with shipments being held back and not reaching their destination, in this case Dubai.

Summary:
Golds failure to rally over the past few weeks, as the Covid19 spread and economic uncertainty rose, has triggered a great deal of uncertainty about what role gold can play. In the short-term the market is being challenged by a continued demand to raise cash and rising real yields as inflation expectations take a tumble. We maintain a positive outlook and draw some parallels what happened during and after the great financial crisis in 2008 and 2009.

Global Market Panic
To listen to legendary billionaire Pierre Lassonde discuss what he is doing with his own money right now, how the global panic will unfold as well where he believes the gold price is headed from here CLICK HERE OR ON THE IMAGE BELOW.