What Will The Fed Do? 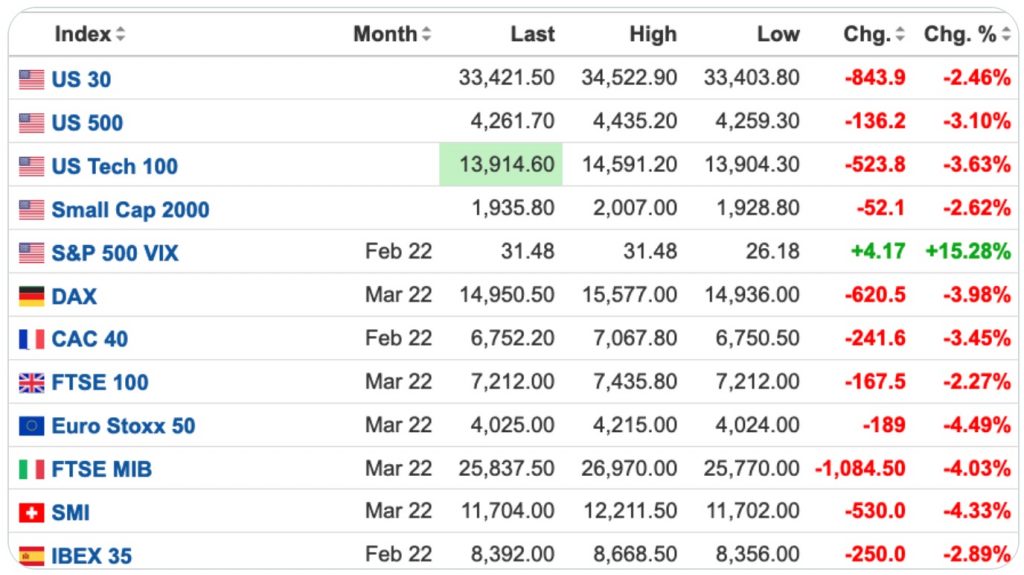 Buckle Up
Egon von Greyerz:  In a backdrop of trillions upon trillions of excessive and addictive monetary and fiscal expansion, the Fed’s “tightening” is too little too late. Things are about to get emotional…

Nasdaq Already 17% Off The High 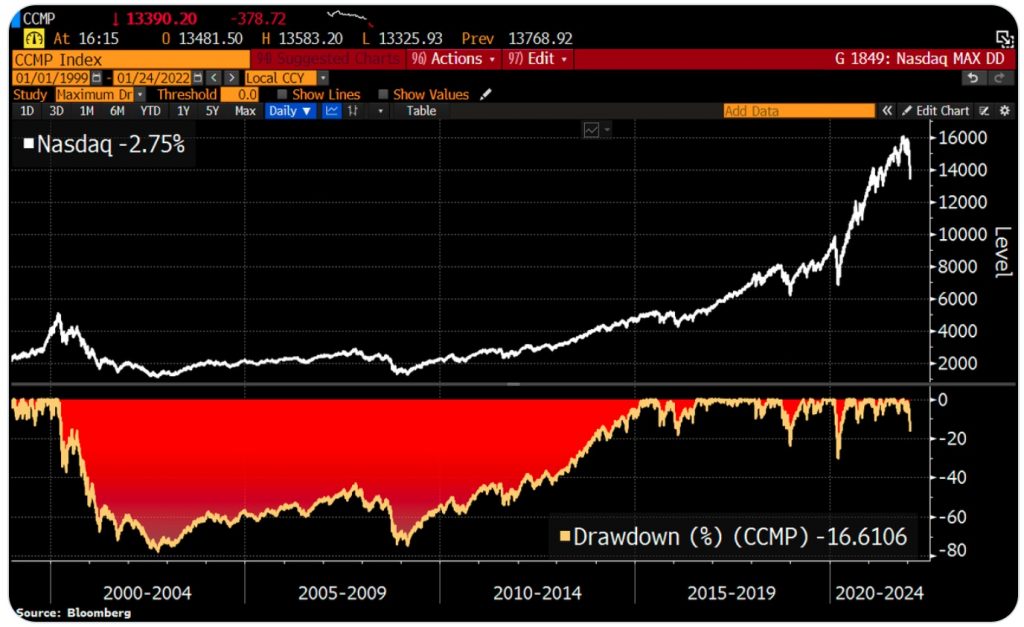 2022 And The Lords Of Easy Money
Peter Boockvar:  Everyone is out with their Fed predictions, both in 2022 strategy pieces and ahead of the meeting this week. Most though are ‘all else equal’ analysis in response to the current high levels of inflation but we know historically there is always an equal and opposite reaction, for every action, as one of Newton’s laws say. The reaction of course is not just where inflation goes from here but also how the broad economy and financial markets handle it, I guess stating the obvious. You’ve heard me say that debt levels, market valuations, economic activity and monetary policy all sit on a foundation and are calibrated in a world of 1-2% inflation, however.

To this, I saw a review over the weekend in the FT on the new book by Christopher Leonard titled “The Lords of Easy Money: How the Federal Reserve Broke the American Economy.” It particularly highlights the viewpoints of ex Fed president Thomas Hoenig. He said this, which is similar to my point, “We’ve built an entire economic system around a zero rate. Not only in the US but globally. It’s massive. Now, think of the adjustment process to a new equilibrium at a higher rate. Do you think it’s costless? Do you think that no one will suffer? Do you think there won’t be winners and losers? No way.”

So bottom line and my 2 cent prediction, I think after ending QE and getting 50-75 bps of rate hikes under their belt, the Fed will then see the economic and market reactions, and where the yield curve lies. Then, if the curve has flattened, they’ll start QT in an attempt to steepen it. If the curve still steepens because the market doesn’t think they are tightening enough, they’ll do more hikes. In other words, after an initial attempt at trying to regain credibility on inflation, they will still be very reactive thereafter to the state of their financial and economic surroundings.

The January Markit US manufacturing and services composite index fell to 50.8 from 57 with most of the decline driven by a nearly 7 pt decline in services to just above 50 at 50.9. Manufacturing slipped 2.7 pts to 55. Markit is blaming the supply side and omicron for the weakness.

Labor Shortages Continue
Specifically with services Markit said, “labor shortages, employee absences and the omicron wave reportedly weighed on growth.” They said the demand side hung in pretty well but did moderate. “Demand conditions held relatively firm, however, as new business rose strongly. The rate of growth was the softest for four months, but was broadly in line with the series average. New business from abroad expanded for the 3rd month running.” Employment rose “at a modest pace.” Backlogs fell to the “slowest since May 2021.”

With respect to pricing, on the input side it fell to the slowest in almost a year but…

“the uptick in costs was linked to supplier price hikes and soaring wage bills.”

And notwithstanding the moderation in input prices:

“Relatively firm demand conditions allowed companies to pass-through some input cost increases, as the rate of charge inflation accelerated to a series high.”

Inflation and covid resulted in business confidence for service providers to fall to a 3 month low.

On the manufacturing front:

“new order growth slowed to the softest rate since July 2020. Alongside labor and material shortages stymieing the upturn, firms noted that customers were keen to reduce spending amid sharp hikes in costs.”

With the capacity side:

Specifically on prices, “The rate of cost inflation eased again in January and was the slowest since May 2021.

Pressure Warning
Although still marked overall, there were signs of pressure waning. Similarly, the pace of charge inflation softened and was the least marked since April 2021.” The inventory build slowed too as did backlogs. With employment, “labor shortages, a high turnover of staff and reports of the non-replacement of voluntary leavers led to the 1st decline in manufacturing employment since July 2020.” There was an increase in optimism as confidence for the coming quarters rose to the highest since November 2020 “amid hopes of stable supply flows and a reduction in the impact of covid.”

Bottom line, omicron has hurt the supply side, both supply chains and labor, much more than the demand side but hopefully with omicron essentially going away in the coming month, that will ease but what then will it be with demand?

Bottom Dropping Out Of Stock Market 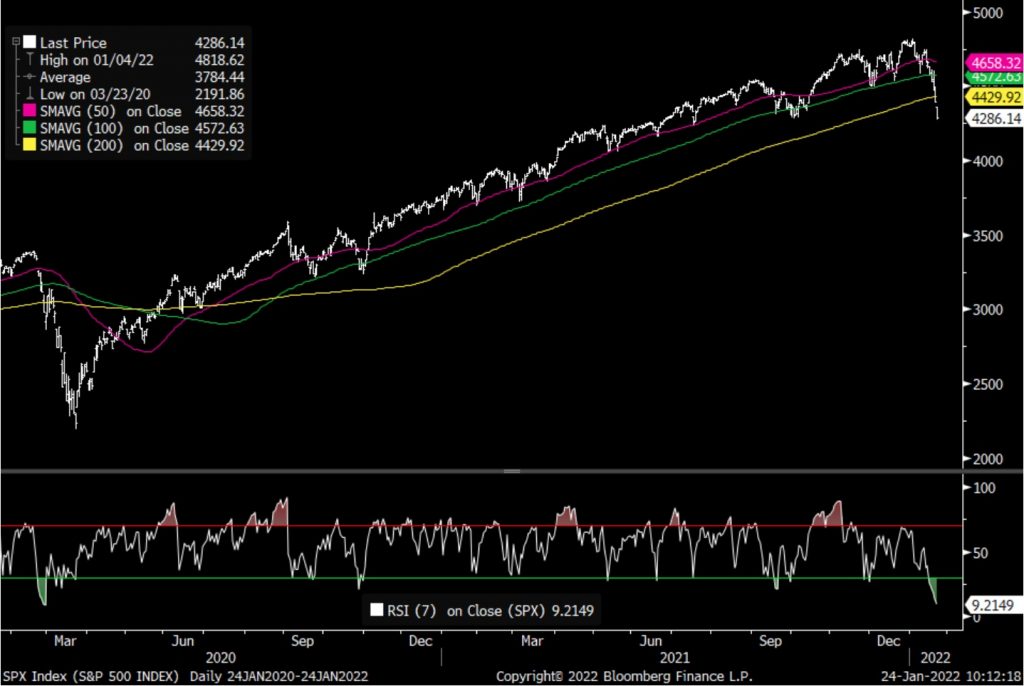 ALSO JUST RELEASAED: Greyerz – 2022: The Year When The World Will Experience The Biggest Financial And Economic Crisis In History CLICK HERE TO READ.