Take a look at this if you want a snapshot of the crazy times we are living in today.

A Boom Within A Bust
October 16 (King World News) – Peter Boockvar:  Core retail sales in September rose 1.4% m/o/m, well better than the estimate of up .3% and only partially offset by a two tenths downward revision to August to -.3%. The original estimate for that August number though was up .3%. Auto sales, where we know has been good particularly with used cars, rose 3.6% m/o/m and 14.1% y/o/y. Building materials, an area also we know to be strong as people work on their homes and contractors are very busy, rose .6% m/o/m and 23.4% y/o/y. Outside of electronics, which was particularly weak surprisingly but maybe a sign of a hangover from all the pulled forward purchases in the months prior, sales were up across the board m/o/m. 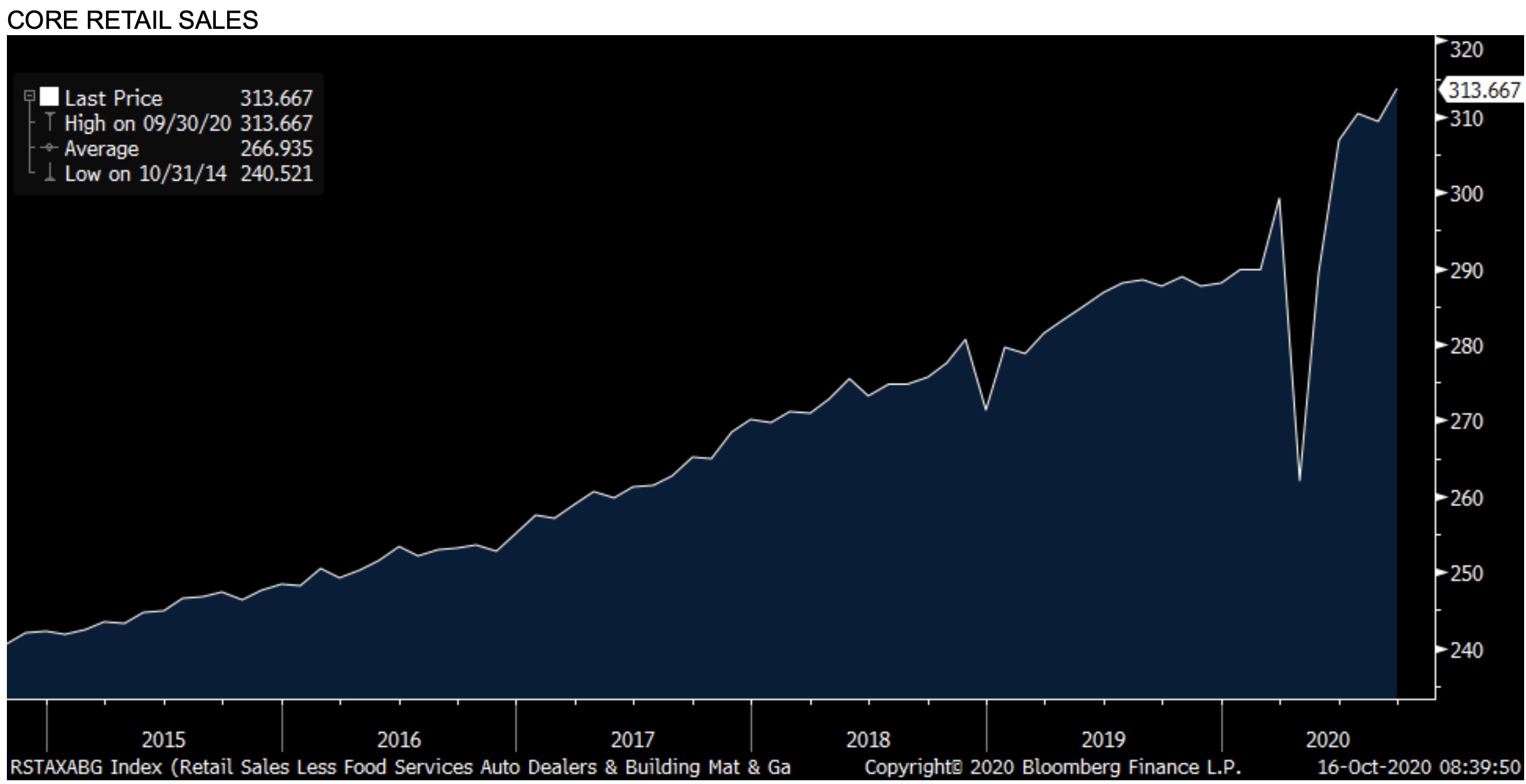 Bizarre Times
Because of the bizarre times we’re in, I’d rather look at y/o/y numbers and here are some other highlights. Electronics, as mentioned, was down 6.1% y/o/y and clothing was lower by 12% y/o/y due to a poor back to school season for well known reasons. Restaurant/bar sales fell 13.7% y/o/y not surprisingly. Department store sales fell 8.2% and we know why. On the upside, furniture sales rose 7.5% y/o/y (home theme), food/beverages by 11.5% as we eat more at home, health/personal care up by 7.8%, sporting goods higher by 18.3% with more outdoor activities (like bikes), and finally online retailing remaining robust with its 27% increase.

Bottom line, while September was the 2nd month without added government benefits, consumers have built up a huge amount of savings (and thus fuel for spending) helped by the already generous transfer payments from March thru July. 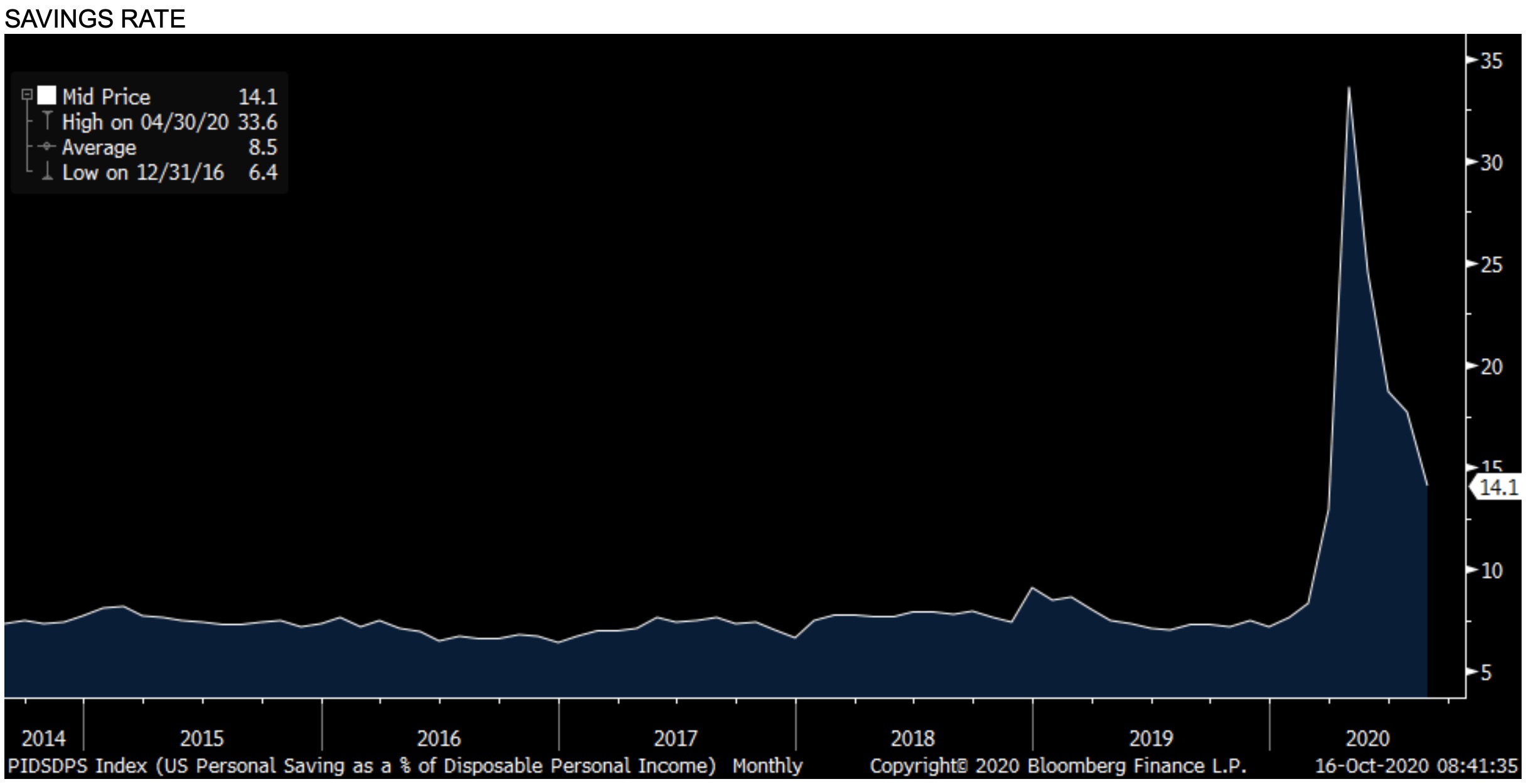 That likely helps to explain the retail sales upside, along with still more hiring going on as things reopen. I know there is a huge debate on the level of fiscal spending needed and how much more in transfer payments needed but we have to remember that some people got more in transfer payments than they made in income where these payments MORE than offset the lost wages and salaries.

US treasuries are lower in response with yields modestly higher. This said, while stocks are up on the week, bond yields as of this writing will be lower as there will be no stimulus bill until after the election.

With respect to spending intentions, those that said it’s a good time to buy a vehicle fell 12 pts to the least since October 2011.

Intentions To Purchase An Automobile Have
Collapsed To The Lowest Level Since 2011! 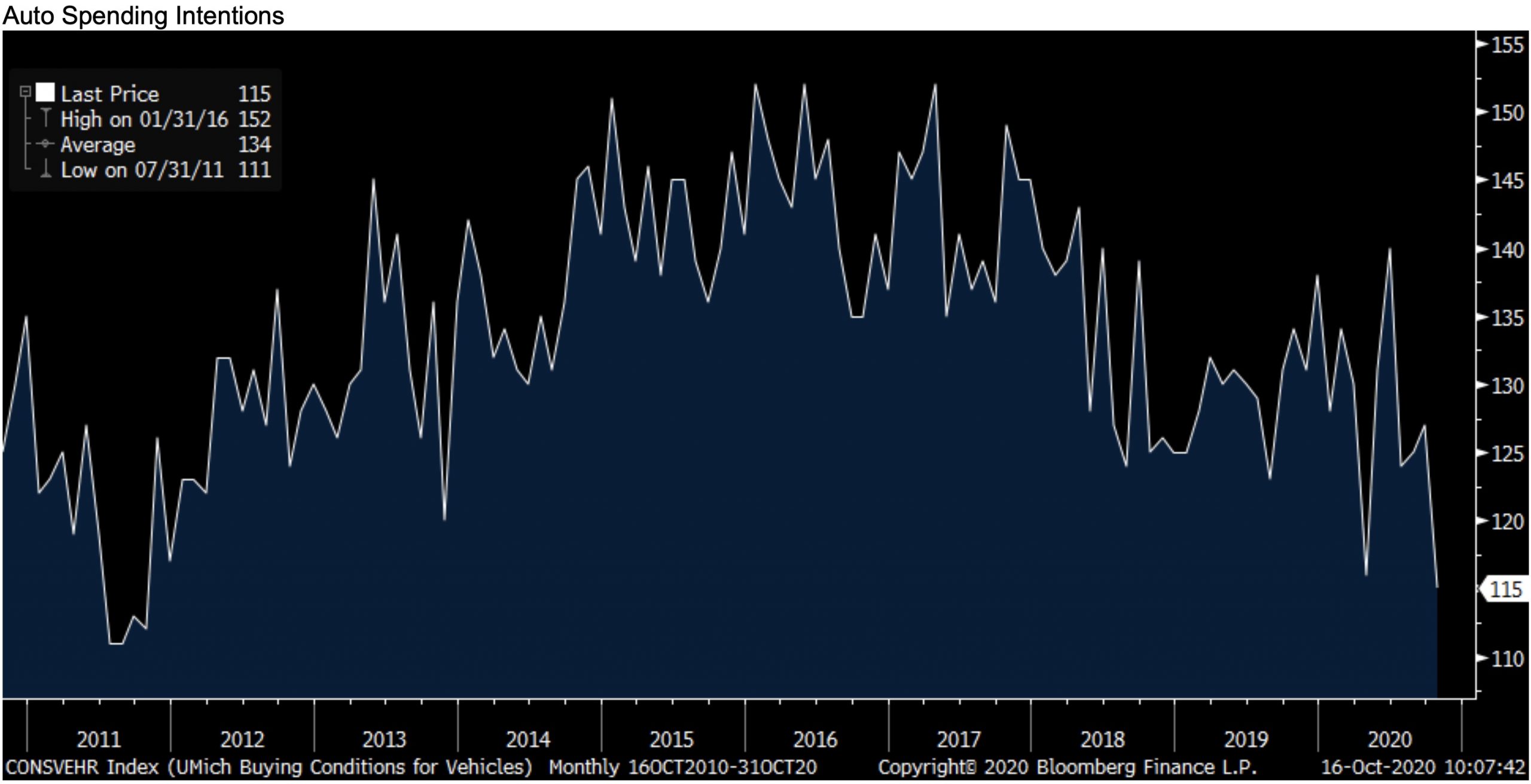 On the flip side and still reflecting strength in housing, those that said it’s a good time to buy a home rose 10 pts to the most since January. Those planning on buying a major household item fell 7 pts but after rising by 8 last month.

On that drop in spending intentions on auto’s and consumer non durables the UoM said:

“with most of the losses among upper income households due to rising concerns about their jobs and incomes.”

I’ll say this, if that more cautious mood translates into actual changes in behavior with respect to upcoming consumer spending, you can throw out the September retail sales figure we saw that was better than expected.

Bottom line, as seen in the chart we are only slowly trying to get back the confidence that was lost and with only about half the jobs lost being recaptured, the still cautious mood is understandable.

Buying Spree
***ALSO JUST RELEASED: Look At Who Has Been On A Huge Buying Spree CLICK HERE.