On the heels of continued uncertainty in the gold and silver markets, one of the greats in the business, John Hathaway, says that we have now entered a momentous period for gold.

King World News note: The information below is part of an extremely powerful piece that John Hathaway recently released.

By John Hathaway, Tocqueville Gold Fund
October 11 (King World News) – The precious metals markets have clearly turned the corner … following the extensive and painful correction from August 2011 to year-end 2015. … Despite the impressive year-to-date advance, we believe this cycle is still in its infancy, and that it promises to be extremely powerful…

We believe that fiscal and monetary policy in all developed countries has reached a dead end, and is all but bankrupt. More important, we maintain that the persistent application of and adherence to idiotic/unproductive public policies have substantially ramped up systemic risk. Investors are beginning to look to gold, fearing that the purchasing power of all paper currency – including the US dollar – is imperiled. The three-decade low in the pound sterling following the Brexit vote is a warning that the practice of central-bank-managed currency exchange rates is unravelling.

… In our view, interest rates will rise, and cannot be normalized without another financial crisis that would mirror or exceed the intensity of the 2008 global credit meltdown. Super-easy money has, in our opinion, reached the end of the road as a credible palliative for economic underperformance. What comes next is anybody’s guess, but under almost any imaginable scenario, gold benefits.

To pinpoint future reasons for a reversal of sentiment is analogous to guessing which snowflake will trigger the avalanche. What should be obvious to the residents in the valley below is the buildup of the cornice (systemic risk). As Lenin said:

“There are decades when nothing happens, and there are weeks where decades happen.”

It is the nature of bull markets to leave most investors on the sidelines, scratching their heads as to what has changed. The upsurge in gold could be a warning of seismic shifts in financial markets.

As we have noted in Paper Gold: Utopia for Alchemists and our Fourth Quarter 2015 Investor Letter, physical gold is in extremely short supply relative to the potential demand that could be activated by a shift in sentiment. That is because 99 percent of the gold traded is in the form of paper contracts (futures, ETFs, derivatives, etc.) that are settled for cash instead of for physical metal. In a financial crisis, counterparty risk is likely to become a paramount concern, leading to a run on the credit-based, cash-settled system of gold trading. Flows into gold ETFs, which must translate inflows into physical holdings, are likely to trigger an outsized gain in the gold price because of the scarcity of physical gold. 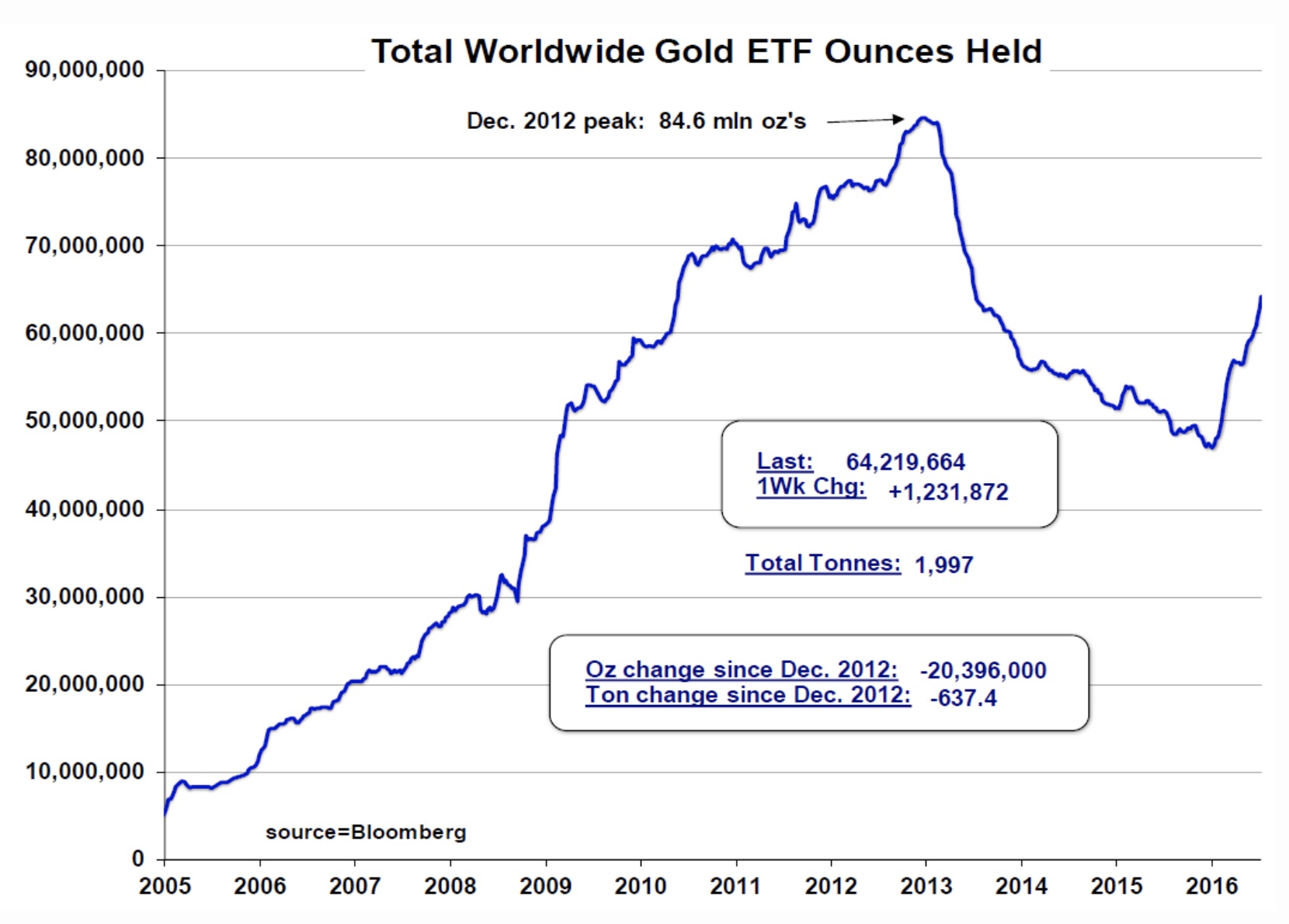 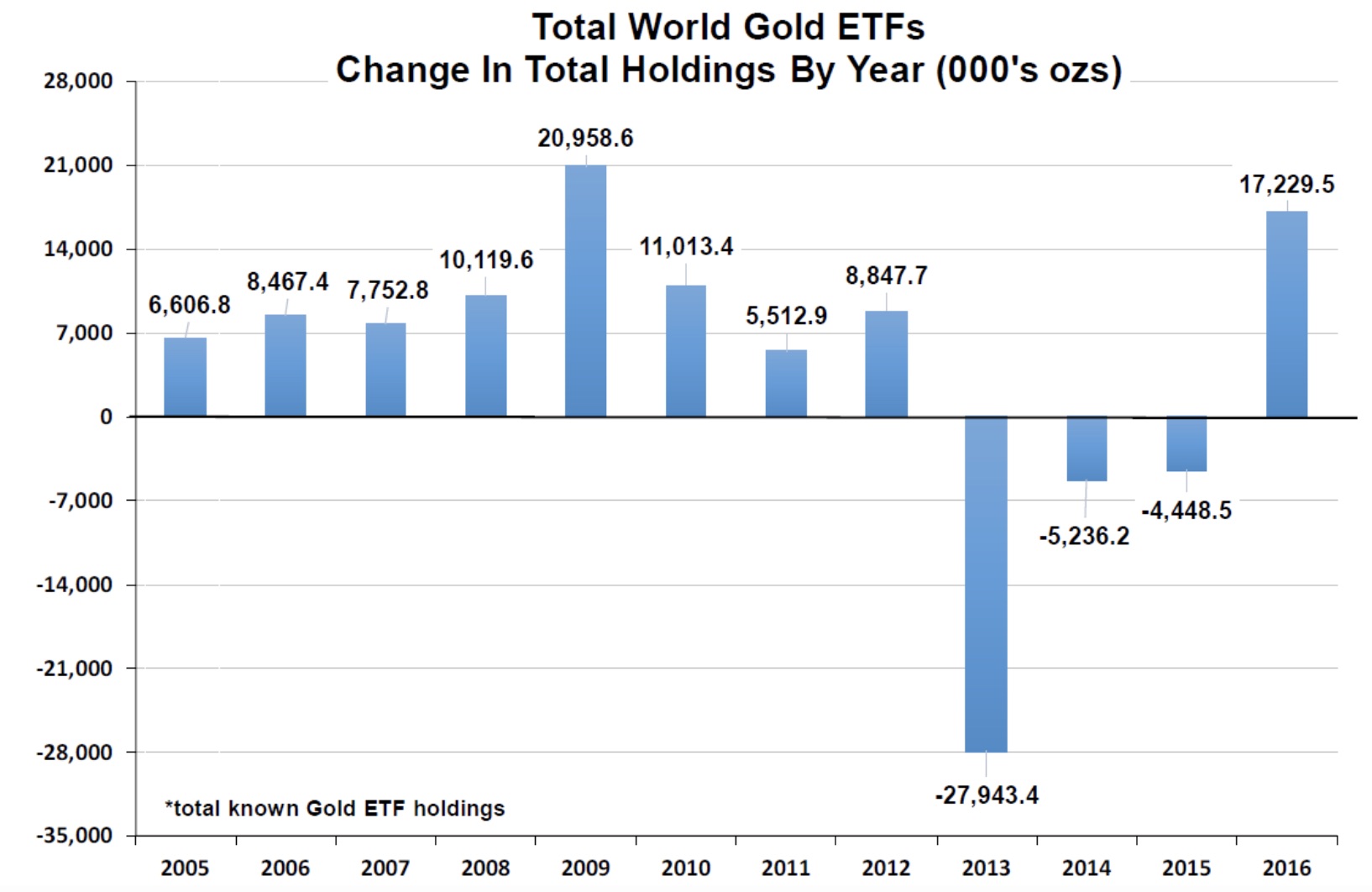 Mining stocks are likely to outpace gains in the metal in the years ahead. Since December 2015, they have done so by a factor of 4 to 1. The mining industry has cut costs, focused on cash generation, and observed financial discipline that was lacking preceding the 2011 market top. … According to the … Belkin Report, “Gold assets are long-term depressed, negatively correlated to the stock market, and have completed a bear market; while stock indexes have entered a bear market….switch out of overvalued equities as global economies contract – into gold-mining equities.”

Gold, having been written out of the monetary script in the years following President Nixon’s closing of the gold window in 1971, appears set to return to center stage. It has recently received serious consideration from noteworthy academic and policy thought-leaders. In a May 3 commentary (“Emerging Markets Should Go For The Gold”), Harvard economics professor Kenneth Rogoff argued that emerging-market central banks should allocate as much as 10 percent of their reserves to gold and away from sovereign debt of wealthy nations:

Why would the system work better with a larger share of gold reserves? The problem with the status quo is that emerging markets as a group are competing for rich-country bonds, which is helping to drive down the interest rates they receive. With interest rates stuck near zero, rich-country bond prices cannot drop much more than they already have, while the supply of advanced-country debt is limited by tax capacity and risk tolerance.

Gold, despite being in nearly fixed supply, does not have this problem, because there is no limit on its price. Moreover, there is a case to be made that gold is an extremely low-risk asset with average real returns comparable to very short-term debt. And, because gold is a highly liquid asset – a key criterion for a reserve asset – central banks can afford to look past its short-term volatility to longer-run average returns.

In a June 27, 2016 Bloomberg interview, Alan Greenspan stated that as a result of Brexit, “we are in the early days of a crisis which has got a way to go,” and that the best solution would be a return to the gold standard that was the basis for international finance from 1870 to 1913. The former Fed chairman (1987-2006) was, in our opinion, an architect and intellectual predecessor for current radical central-banking activism. For him to make such a statement is an eye-opener, suggesting that this former policy insider no longer believes that the dollar-centric fiat currency system is workable.

We Have Entered A Momentous Period For Gold
It seems to us that we have entered a momentous period for gold: “weeks where decades happen.” The rewards of gold exposure, in our opinion, promise to be of historic magnitude. At such a moment, it would be counterproductive for investors to dwell upon issues of market timing. Gold is extremely under-owned, and therefore likely to react dynamically to even modest inflows. Despite strong (year-to-date) gains, we believe that the current alignment of political and economic factors is unusually compelling. In our view, substantial gains lie ahead.

***Also just released: This Astounding Signal Says Gold Will Soar In The Next 12 – 36 Months CLICK HERE.