Big Problem, Out Of Control, Plus Last Time This Happened Gold Surged $385

With the Dow surging over 450 and the price of gold tumbling nearly $40, here is a look at a big problem, what is out of control, plus last time this happened gold surged $385.

Big Problem
January 27 (King World News) – Steph Pomboy:  The only # that matters in today’s GDP is 1.9%. That was growth ex inventories (aka Real Final Sales). So much for the strong economy and the shortage of merchandise. We are about to go from shortage to glut and inflation to disinflation…RIGHT as the Fed tightens.

This Is Not Good
Luke Gromen:  One of the most under-appreciated developments of 2021 can be seen in the chart below: Both US & Japan ran the Japan playbook, but Japan got deflation while US got 7% CPI. HUGE signpost. Twin deficit nations running the Japan playbook don’t become Japan, they become Argentina. 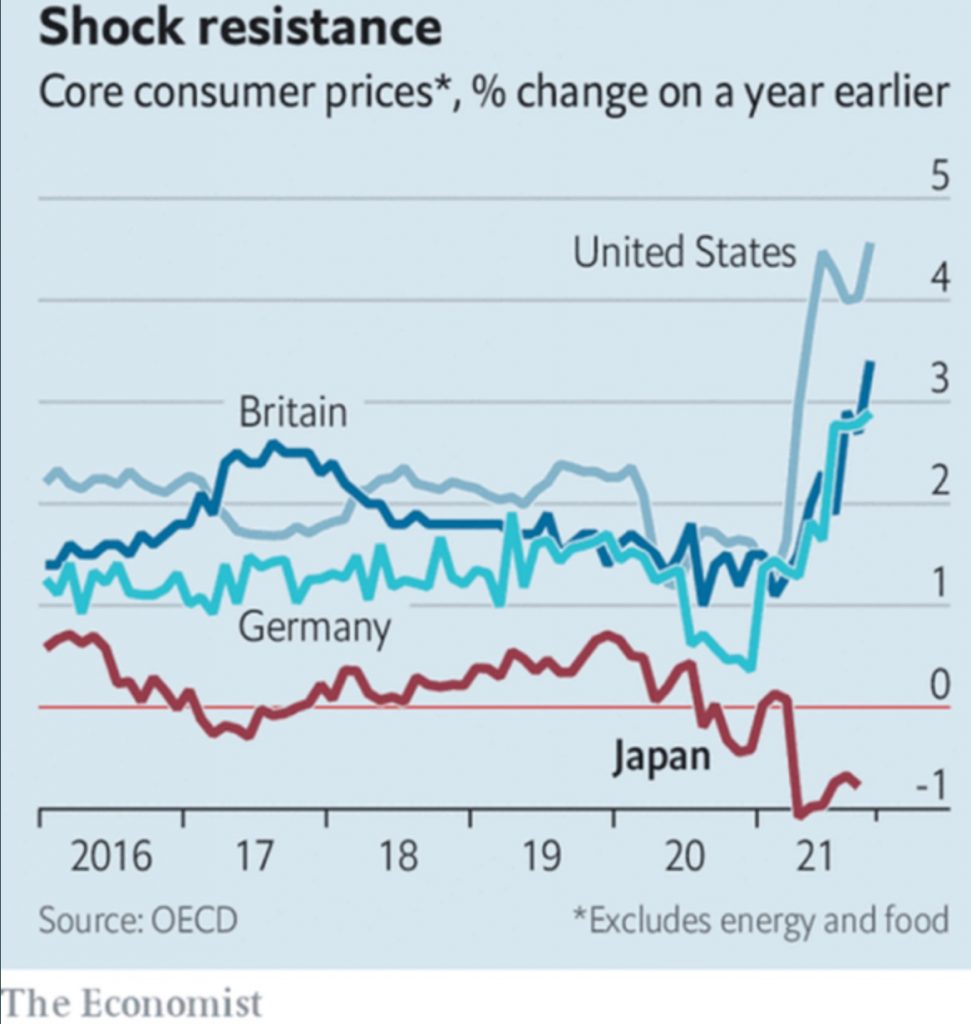 GOLD: Act Like Tech Bulls
Fred Hickey:  It would be helpful if gold bulls would start acting just a smidge more like the tech bulls (invincible, they can never lose & always buy the dips!) instead of cowering in the corner, seeing ghosts & conspiracies that don’t exist and constantly whining.

Out Of Control
James Turk:  That GDP growth rate sounds impressive until looking at the 16.7% annual growth rate of the US federal government’s debt in the 4th quarter that is now approaching $30t. US dollar monetary system & MMT are out of control. Own physical gold and silver… 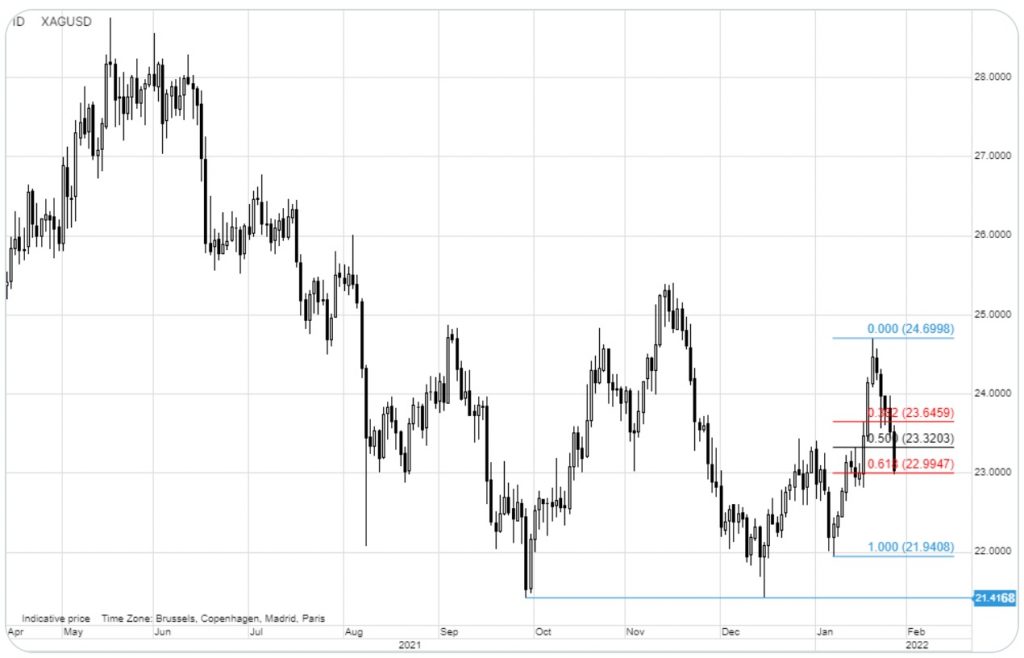 Double Tightening
Peter Boockvar:  While noncommittal on timing and pace, the most noteworthy thing yesterday from Powell was his expression that they will be double tightening monetary policy again. Again, because they did it in 2018 (see chart) and we know how that ended. So, ending QE begins the process of tightening financial conditions and QT then intensifies it as after all, QE was meant to loosen them. 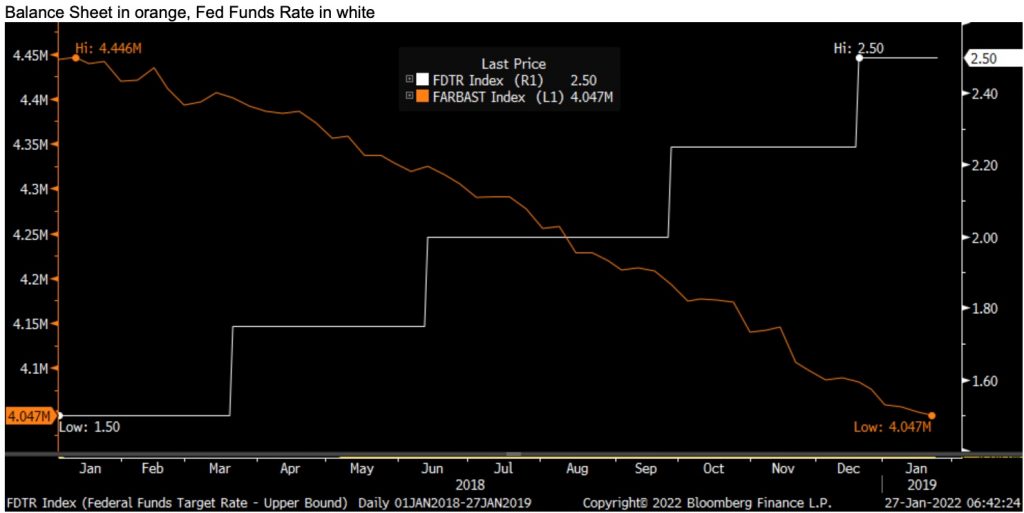 Rate hikes will be the tool that will directly slow the demand side. Let’s hope for a different outcome but the pace of rate hikes and QT as planned right now (however vaguely spoken about yesterday) will be more aggressive than in 2018 and QT will NOT be like watching paint dry as someone once hoped it would be like.

Yesterday morning the December fed funds futures contract was yielding 1.025% and the January one was at 1.08%. Today they stand at 1.20% and 1.26% respectively after Powell’s comments. The math of that is we are now pricing in a 76% chance of a 5th rate hike this year. Those odds of course only reflect the reality today and we know the Fed is now ‘data dependent’ and implicitly ‘financial conditions dependent’, aka, the level of stocks and bonds so anything can change from here.

In response, the yield curve is flattening further today by 7 bps after yesterday’s move by 4. At 65 bps, it was last seen in November 2020. The DXY is the other noteworthy mover as it is at the highest since July 2020. Keep in mind that 70% of DXY is the euro and yen but the dollar is rallying across the board these past few days.

Global Tightening
As heard from the Bank of Canada yesterday and from other central banks, this will be a global tightening process ahead. As for the ECB, the bank that has managed to out dove the BoJ, a few members this week said they don’t want to raise rates until after QE is done which is not for a while but the pressure will grow. If you didn’t see the article in yesterday’s FT, the title was “Eurozone employers get creative to lure staff.” The region is experiencing labor shortages too and wages/bonuses are rising as a result. “The founder of Deutsche Familienversicherung, a fast growing, Frankfurt based insurer, is offering 500 euros to anyone who is interviewed for a vacancy, another 1,000 to those who make it to a 2nd round, and 5,000 more to those who complete a six month probation period.”

In France, the article said, “more French employers were hiring staff on secure, permanent contracts, reversing the trend of more precarious, short term arrangements. A deal reached this month in the hospitality sector, delivering an average 16% pay rise, is also a sign that wage pressures are building.” Back to Germany, “Germany’s coalition government has pledged a 12 euro an hour minimum wage that will benefit some 7mm workers, despite opposition from employers.” Lastly, in Spain, they are “launching a crackdown on temporary contracts, which account for a quarter of the workforce, in reforms agreed with business and unions.” Good luck Christine Lagarde, the world’s bond markets are watching.

Yes, US Consumer Is Broke But There Is A Much Bigger Disaster Unfolding