With tremendous volatility overtaking all global markets in 2020, it’s time to step back and connect the dots.

Connecting The Dots
April 7 (King World News) – Jeff Snider at Alhambra Partners:  Toward the end of March 2012, then-Federal Reserve Chairman Ben Bernanke was busy with so many things. It wasn’t supposed to have been that way, not after two “massive” QE’s launched in the wake of the Great “Recession.” After all, V-shaped recoveries provide their own momentum upon which central bankers might piggy-back.

In short, there shouldn’t have been any questions about recovery. Yet, these persisted into 2012 (and long after). In public as well as in private discussions, it never dawned on these people to connect the dots: how the constant need to attend to the global monetary system might have been the very reason for the lack of recovery energy.

Deprive any animal of oxygen and watch how it doesn’t move very fast.

The consequences were more than just perpetual monetary crisis, the global economy was stuck in the throes of a labor problem. Therefore, entering 2012 no one wanted to hear about what Mario Draghi was doing with LTRO’s in Europe or whether Operation Twist fit the definitions for balance sheet expansion (as if that was important). 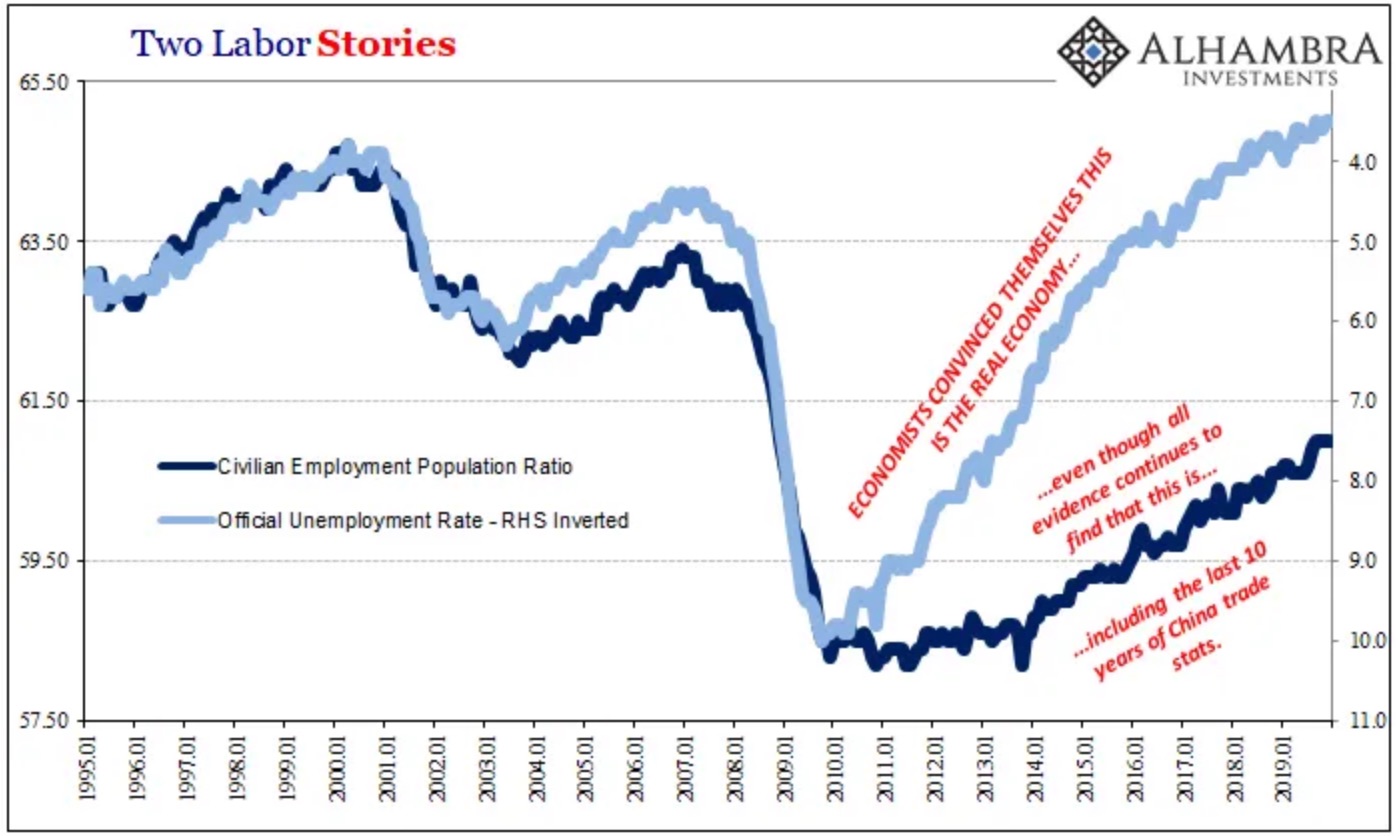 What the vast majority of Americans wanted from their central bank was answers on jobs. Where were they?

Standing before the National Association for Business Economics Annual Conference on March 26, 2012, Bernanke reluctantly confessed the unemployment rate might not have been the best measure of progress. At the time, it was moving lower, sure, but too many Americans were being left out of its denominator.

“Another logical possibility is that the decline in the unemployment rate could be overstating the improvement in the job market. For example, potential workers could be giving up on looking for work to an unusual extent. Because a person has to be either working or looking for work to be counted as part of the labor force, an increase in the number of people too discouraged to continue their search for work would reduce the unemployment rate, all else being equal – but not for a positive reason. A story centered on potential workers dropping out of the labor force might seem in line with the low level of the labor force participation rate.”

But, heroic Bernanke claimed, there was other data suggesting that the unemployment rate might not have been so faulty. And so, the R* fable was let loose to cover up what had been, and remains, one of the greatest and most destructive failures in modern American history…

IMPORTANT:
One of the great gold opportunities in the U.S. and you can take a look at this remarkable company and listen to the just-released fantastic interview with the man who runs it by CLICKING HERE OR BELOW

Cyclical recessions had been a part of economic life. These were actually an improvement upon the early US economy, when bank panics and depressions appeared hand-in-hand with some regularity.

In a recession, large numbers of workers are laid off by companies seeking to control profitability while revenues are falling. Intuitive and simple.

Once those workers are laid off, they continue to look for work. They may be jobless but they never leave the labor force. Why would they? Everyone understands the nature of the business cycle; even when you become unemployed, as painful and nerve-wracking as that may be it won’t be a permanent situation.

At some point, what we call recovery, companies will start hiring again. In normal times, they go nuts hiring to make up for time lost under recession. That’s the V-shape. Workers understand that they must only hold out until the upswing.

This is the way it had been in every cyclical recession. While the unemployment rate necessarily surged properly depicting the negativity of the situation, one reason why was because the total labor force wouldn’t be much altered.

At most, growth of the labor force would be temporarily curtailed by a cyclical peak; some new potential workers delaying their initial entry until recovery. Workers already in the labor force, including those involuntarily collecting unemployment benefits, never actually left it because they continued to look for jobs. Again, why wouldn’t they? 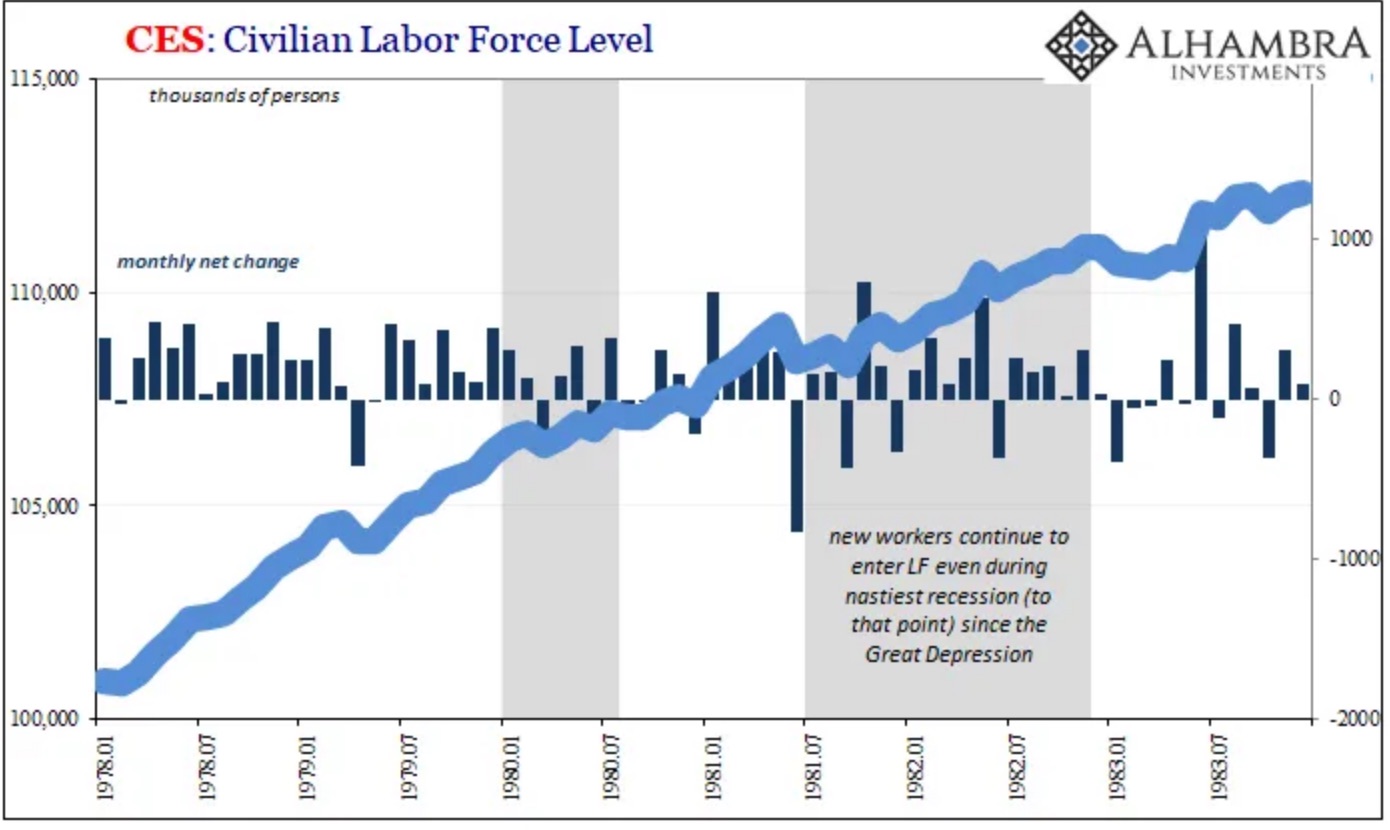 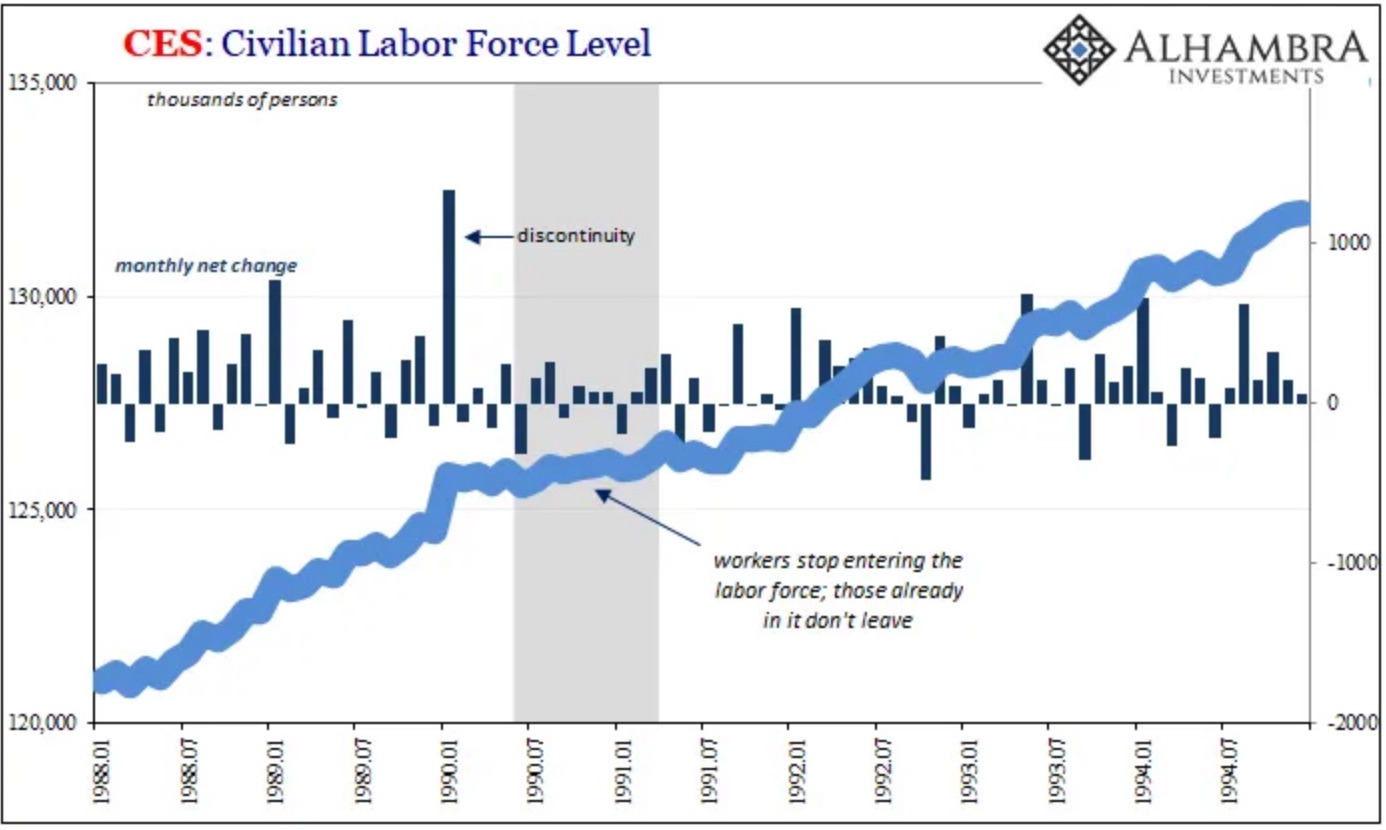 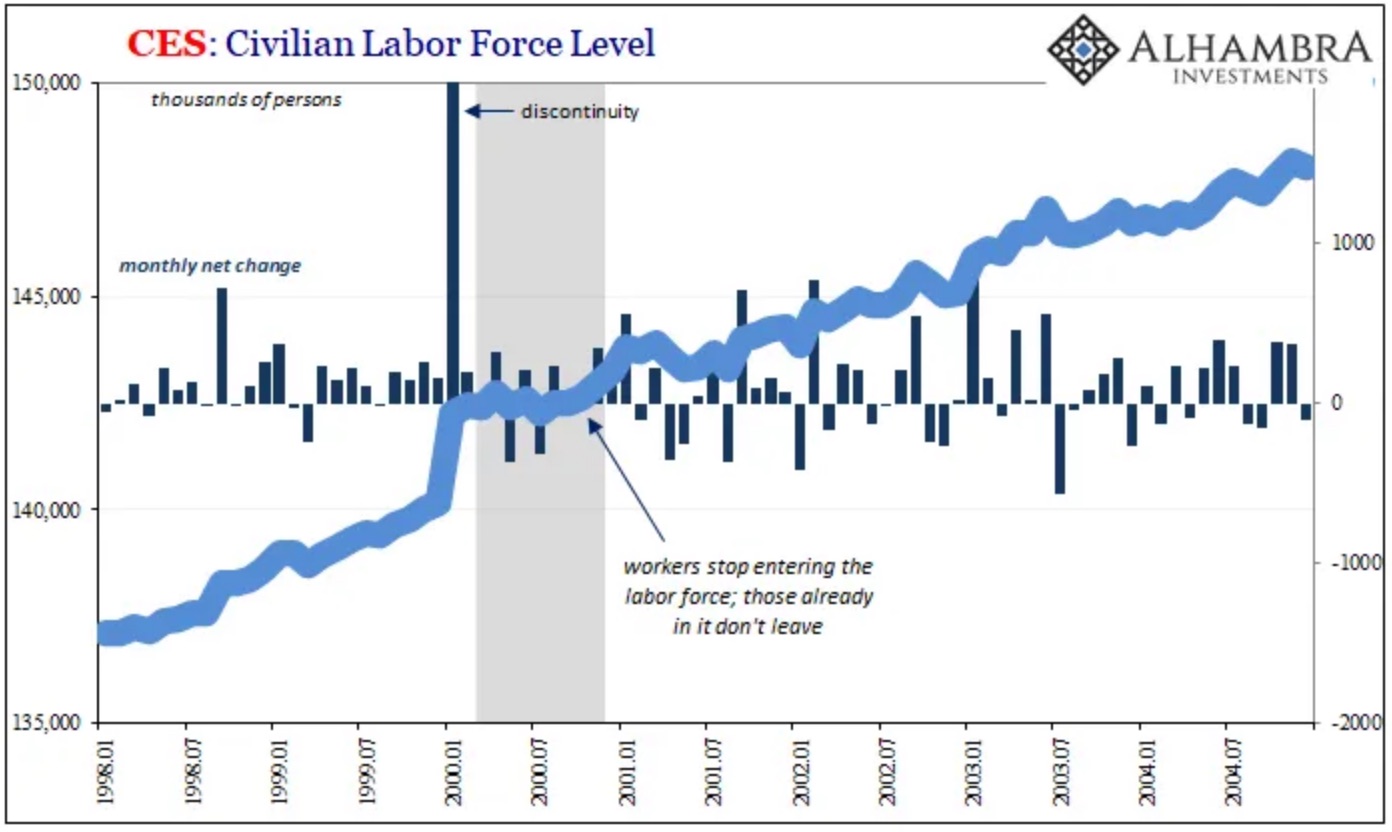 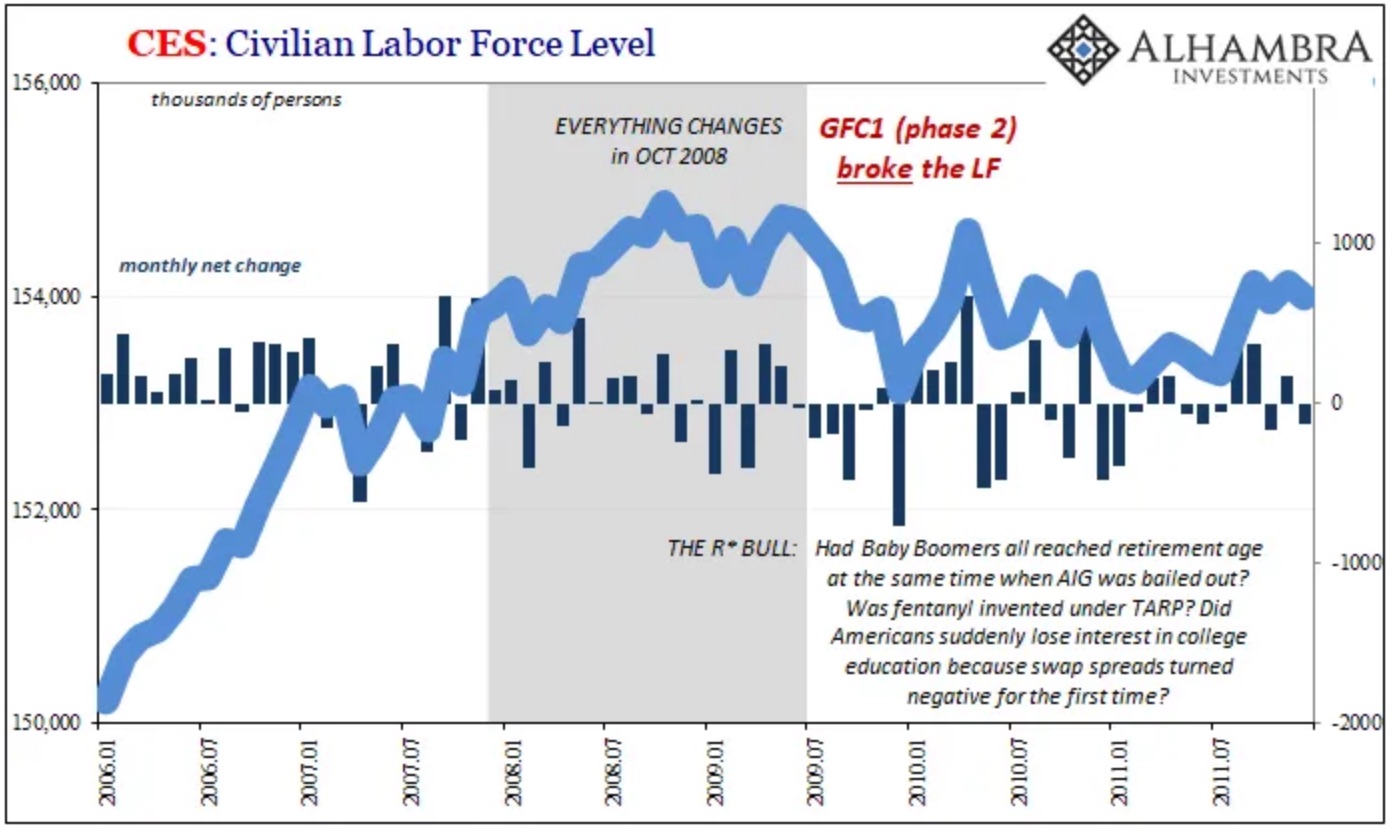 All of that changed, however, after October 2008 (last chart above). Why October 2008? It is self-explanatory – except if you are a central banker. Thus, Ben Bernanke has had to pretend that “abundant” reserves fixed the crisis and furthermore the labor market wasn’t broken by the fact he actually didn’t solve anything with them.

American workers understand the situation far better than he ever did (or pretended not to). They saw that this was different, GFC1 represented a long and painful road back. Companies pushed to the very edge of survival by liquidity pressures, very good companies that just weren’t going to be the same because the Federal Reserve, for all its bluster and showmanship, had failed at its first job.

Americans could tell how it had all changed. They knew what their employers were up against and what that would mean on the other side of GFC1. Workers reacted naturally; hundreds of thousands, nearly two million left the labor force altogether knowing full well there wasn’t going to be much of a recovery.

This economic contraction was very different. What made it different was apparent all in October 2008.

The R* Economists want you to believe that it has been the workforce which has changed, and while there is a kernel of truth about it, the real truth, the vast majority is exactly what you see on the charts above. Workers didn’t suddenly turn lazy and against further education because swap spreads turned negative in October 2008; the Baby Boomers didn’t all retire when TARP was passed (a lie that is no longer much repeated because it has been so thoroughly debunked; Baby Boomers have been forced to work longer); and fentanyl wasn’t invented by someone working on the Maiden Lane rescues of AIG.

The Federal Reserve dropped the ball and the American workforce has paid the terrible price. Ben Bernanke was awarded with cushy, lucrative fellowships that allow him to roam from place to place arrogantly smiling about how it must be R*, because there’s no way Courageous Ben could’ve screwed up everything up so thoroughly. 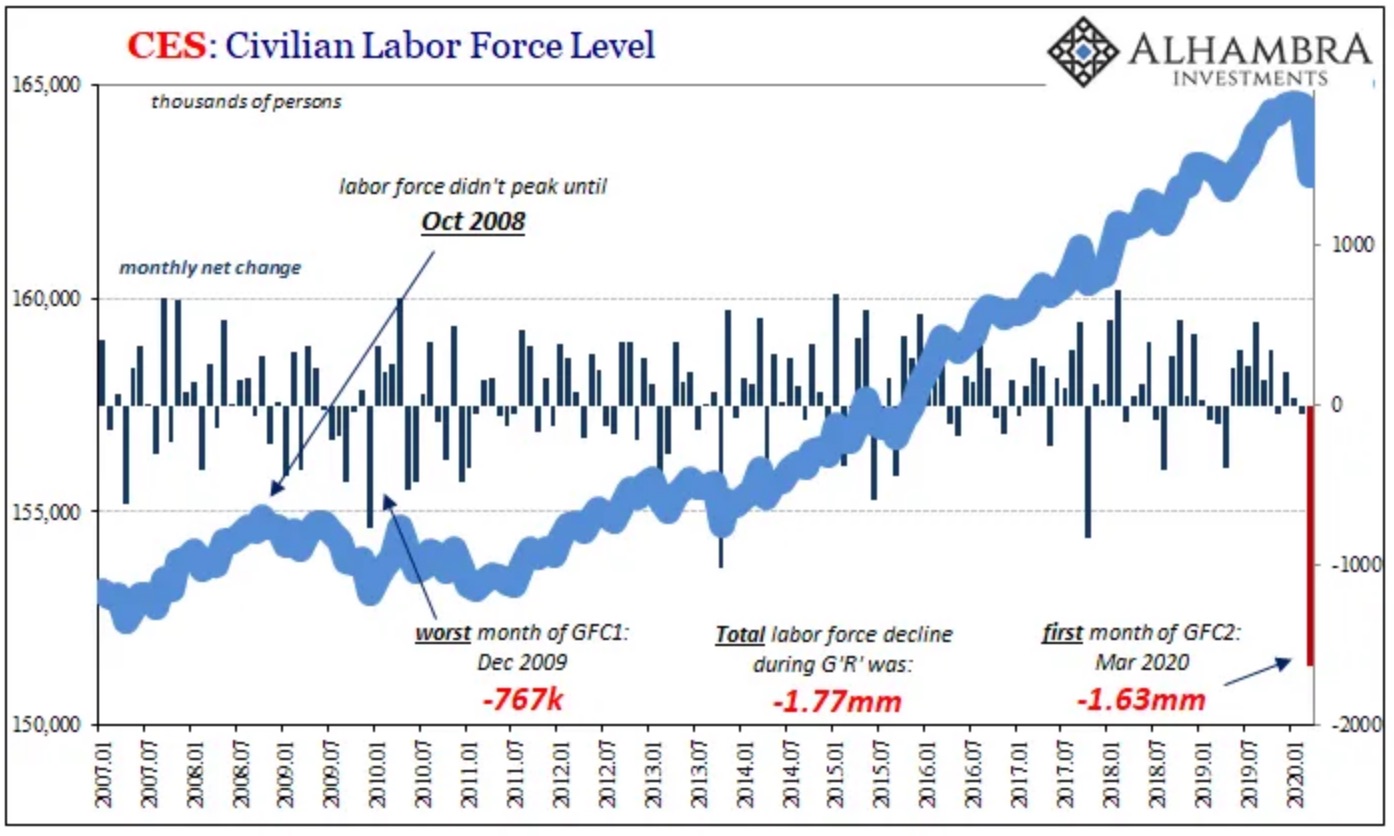 The question has to be asked: why did Americans give up on the labor force so quickly and to such a massive degree? Nearly as many of them exited in just this first month of GFC2 than had during and after all of GFC1.

If the economic shutdown was perceived to be a short-term matter, then they’d still be counting themselves within the labor force even as these millions file for unemployment.

The answer is, once more, in the unemployment rate. Bernanke was right back in March 2012 even if he was half-heartedly forced into bringing it up. It had overstated the real condition, a problem that hadn’t gone away over the seven years in between. There are any number of ways to verify this, especially in how Jay Powell never did gain his wage-driven inflation the models kept telling him to expect from such a biblically tight labor market.

And, the smoking gun, those same models “recalculated” slack last year in a belated admission that, despite the 50-year low unemployment rate, there had to still be some leftover from GFC1 all these years later.

Now imagine that backdrop against an even more immediate problem. Workers know that the labor market wasn’t ever “tight” and then they were hit with Euro$ #4, a globally synchronized downturn that in 2019 slowed everything down even more. 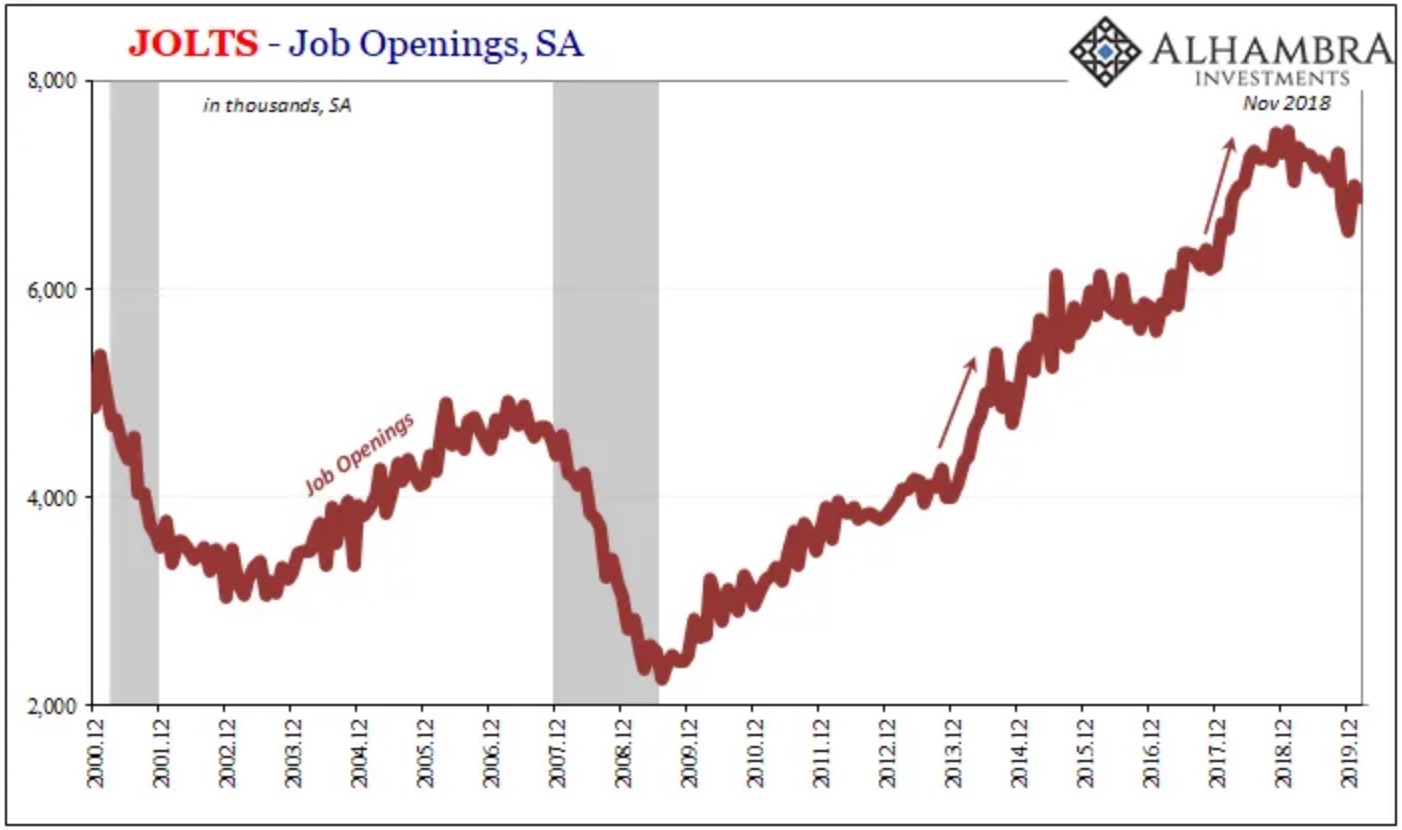 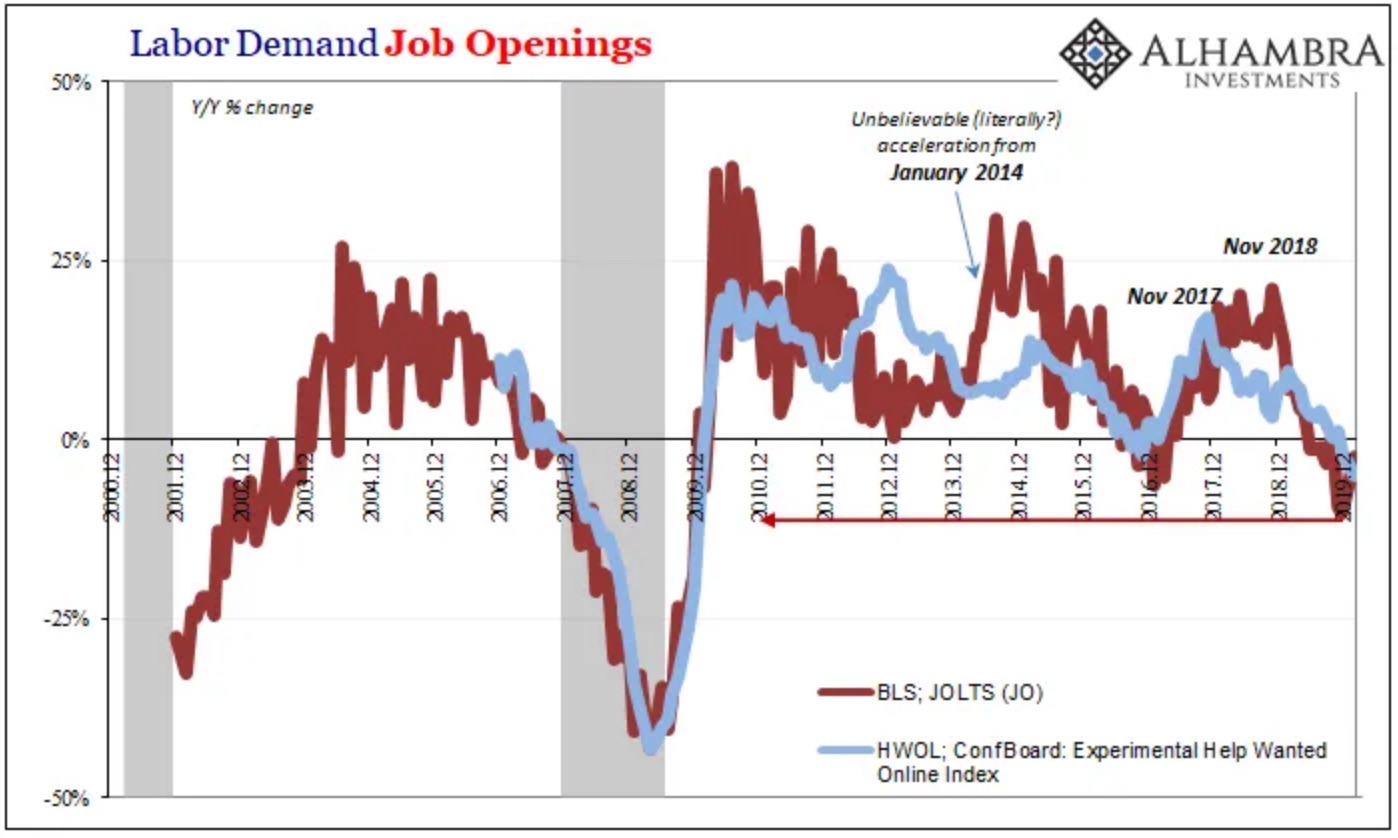 Jobs were getting harder to come by already last year, demand for labor definitely ebbing no matter what Jay Powell kept claiming (you might be starting to wonder if central bankers are always disingenuous when it comes to their statements about the labor market).

Now imagine those kinds of growing uncertainties when all of a sudden…GFC2. If, as a worker, you thought it was tenuous at best in February, in reality as opposed to what they were talking about in the financial media, what does it look like now given how companies are panicking (and markets, too)? The enormous exodus from the labor market isn’t hard to understand when you realize the fakeness behind the unemployment rate and the “strong” economy.

It was a fragile situation from the start which easily shattered when faced with significant pressure (which, admittedly, was itself abnormally negative). According to the BLS, in March more than 1.6 million former workers just gave up. How many more millions this month?

This cannot be a short-term situation. Even if the coronavirus shutdown proves to be, we can only hope, the lingering effects of GFC2 will not be. Those millions about to leave the labor force, like the nearly two million who already did, understand this; for many of them, they’ve been through this before. They just never knew why.

Like Ben Bernanke proved to be, Jay Powell is powerless. If he has a conscience, he will take a very long and honest look at the inflection of October 2008 and therefore connect the two easiest dots anyone might ever connect: GFC’s and deep labor troubles, the very thing John Maynard Keynes warned them about.

But you and I both know that’s not what he’ll do. R* is about to become even more officially popular than it ever was. It’ll be enough to drive a few more million out of the labor force.