Art Cashin On The Collapse Of Tesla. Plus A Look At The Big Shock

Here is a look at Art Cashin’s thoughts on the collapse of Tesla. Plus a look at the big shock.

Sometimes They Do Ring A Bell.
But, Only The Wise Tend To Hear It.
January 19 (King World News) – Art Cashin, Head of Floor Operations at UBS:  Back in early 2021, Elon Musk decided that he was going to put a chunk of Tesla’s cash reserves into Bitcoin. Nobody said too much about it at the time, except for one or two people. A little over a month later, I wrote the following:

“I have remarked many times how about how insightful the people over at DataTrek are and, recently, their savvy co-founder, Nick Colas, put out an intriguing thesis on the recent halt in Tesla’s rise and, what may have caused it.

If I understand it correctly, Nick’s thesis is along the line that follows:

…. he feels that when Elon Musk talked about Bitcoin and, then put a chunk of reserves into Bitcoin, a bell may have gone off in some investors heads saying, up until now Musk thought every penny he had was best reinvested in Tesla, the best growing, most creative company on earth.

If he is now buying Bitcoin, he must think that Bitcoin is a better temporary investment than Tesla and, since then, Tesla has stuttered and sputtered a bit while Bitcoin has risen.

I think it is a fascinating thesis and, I will certainly be watching the relationship between the movement in Tesla and, the movement in Bitcoin to see if it has an ongoing validity.”

By my recollection, Mr. Musk announced the Bitcoin transaction on February 8, 2021. At the time, Tesla was trading, I believe, around $863 a share and Bitcoin was selling at about $44,000.

It has been a long time and a pretty big change on both sides. Sometimes they do ring a bell.

And, now back to the current market.

Overnight
Overnight, global equity markets are showing mostly small changes and leaning to the downside, apparently in some reaction not only to the selloff in New York yesterday, but the continuing weakness in the futures overnight.

In the pre-dawn hours, we will hear from Christine Lagarde of the ECB, and we will also hear from a couple of Fed speakers, not the least of which will be Vice Chair Lael Brainard who speaks in early afternoon. So, that will be getting a great deal of attention.

For now, the yields are stable to a couple of basis points higher, awaiting some of the upcoming data today. There may have been some technical damage done in yesterday’s selloff. We told you the market was overbought and that the second half of January is somewhat notorious for seasonal weakness. We are seeing a pullback that may have begun yesterday, but we are not going to award any laurels too early.

The markets in Asia, as I say, are like their European cousins, showing nervous small changes, mostly leaning to the downside, but so far, none of great significance.

The U.S. economic calendar is somewhat busy, but not exceptionally so. Early in the morning, we will get Housing Starts and Building Permits. Traders will look at the starts with a slight bit of skepticism. They may be affected by the very rainy weather on the West Coast. People often forget that starts can be distorted by weather such as extraordinary cold snaps, snow, rain spells, etc. So, there will be permits they look at to see what the homebuilder’s optimism looks like and, after that, it being Thursday, we get will get Initial Jobless Claims, the Philly Fed Business Index and, in late morning, we are going to get natural gas inventories and we will get oil inventories since Monday was a holiday. We will hear from Brainard as the afternoon begins and maybe one or two other Fed speakers.

Clearly, we will be watching any data coming out of Davos. On the technical side, if there is some sign of significant weakness, do we break the 3900- support level in the S&P and then, perhaps, next week, we will look to see the support at the more important 3800 level.

The slide rule suggests to me that we may, in fact, be headed to a retest of the October lows of the 3600 level and on from there. So, we will see if the second half of January lives up to that tendency for weakness.

Otherwise, you know the drill. Stay close to the newsticker. Keep your seatbelt fastened. Stay nimble and alert. Watch the yield on the ten-year, but don’t necessarily expect the tick for tick relationship we have seen in previous weeks. As I said, I think the market may be going through a bit of a metamorphosis here, in which the lower yields may be taking as more of sign of the recession than changes in Fed policy, but one day does not make a summer. So, we will see if it happens again today and into next week. In the meantime, stay safe.

Public Registering Greed Reading In Stocks
Peter Boockvar:  The market rally has brought back the bulls as sentiment ALWAYS follows price. Yesterday Investors Intelligence said Bulls rose 46.5 from 41.4 and that is the most since December 2021. Bears fell to 29.6 from 32.9. In today’s AAII, Bulls rose 7 pts to 31, the most since mid November 2022. Bears fell by almost 7 pts to 33.1, the least since early November 2022 and just .2 pts from the lowest since March 2022. The CNN Fear/Greed gauge is at 57, a touch in the ‘Greed’ camp…

Bottom line, I get the excitement in the markets that inflation is rolling over and the Fed is almost done hiking rates. But, to repeat something I’ve said before, bear markets have 3 stages. The first is one, which we are now past it seems, is that we take out a lot of the froth from the bull market. The second phase has only just begun however and that is digesting the economic impact from aggressive Fed rate hikes and what that also means for earnings. With yesterday’s selloff in response to the soft economic data, we might have now just begun part two. The 3rd phase by the way is when everyone throws in the towel and many never want to own a stock again. That’s the bottom.

The Big Shock
Months ago I gave an example of a real estate project/deal that was struck a few years ago and whose loan was coming due and needed to be refinanced in order to highlight the acute impact the sharp rise in rates will have on commercial real estate players who took on too much debt and/or have loans coming due this year. If you didn’t see the article in yesterday’s WSJ titled “Commercial Landlords Grapple with Big Surge in Hedge Costs”, please read it.

As of 2019, the MBA said about 1/3 of commercial property debt was floating rate and lenders usually expect borrowers to hedge with an interest rate cap. The article said that pre 2022, “The cap on a multi million dollar mortgage could be had for as little as $10,000.” Now? “In some cases, renewing this protection at the old interest rate now costs 10 times as much as it did 12 months ago, analysts and brokers said.”

Here is an example given where it’s much worse:

“In 2020 apartment owner Investors Management Group took out a $24.4mm loan at a 300 unit apartment complex in San Antonio, with a 5% interest rate cap that cost $22,000 said Karlin Conklin, the firm’s principal. That cap will expire in September. Ms. Conklin estimates that purchasing a new two-year hedge will cost $1 million, which is about 40% of the property’s annual net income. Her company will likely either sell the property or refinance at a fixed rate instead of paying for the new cap, she said.”

Assume a fixed rate would be north of 8% I say vs the 3% when this deal took place. This is going to be a big area of problems in 2023 for those not conservatively financed because the shock therapy rate rise in a year after 15 years of cheap capital.

Real Estate
After falling in all 12 months of 2022 by a total of 53 pts to 31, the NAHB home builder sentiment survey rose 4 pts in January to 35, thus remaining well below the 50 breakeven between expansion and contraction. 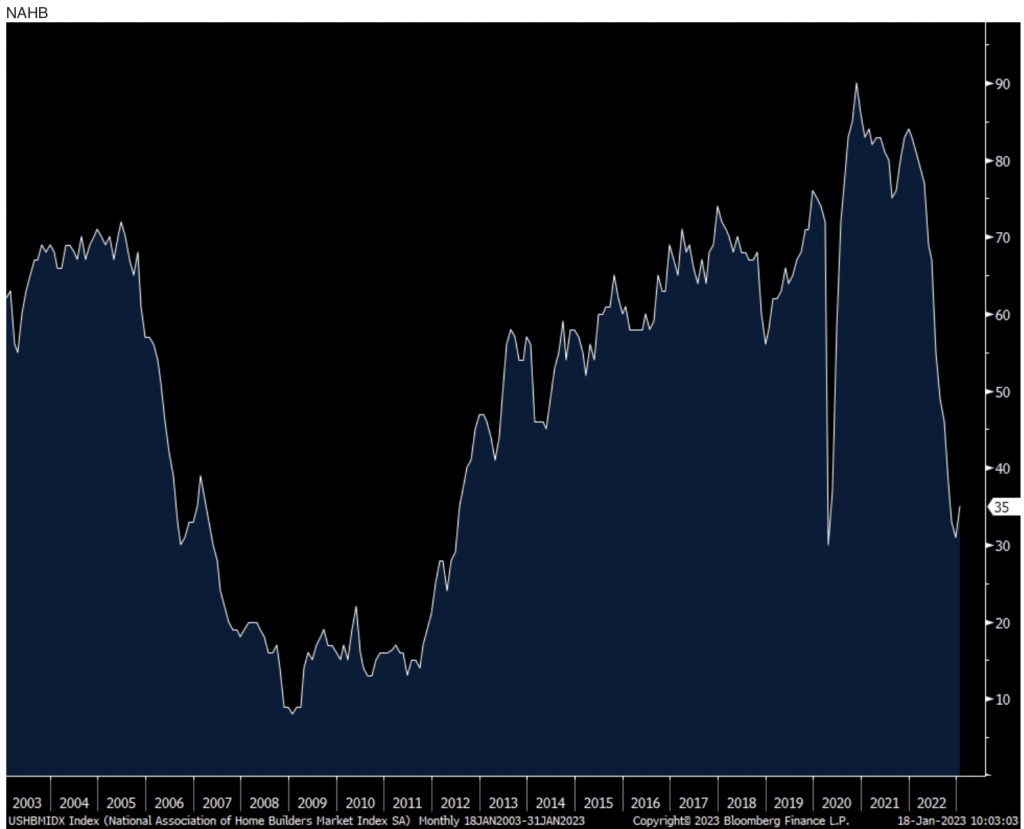 Present conditions rose by 4 pts while the outlook was up by 2 pts. Prospective Buyers Traffic remained very low but a bit less so at 23 vs 20 in December. 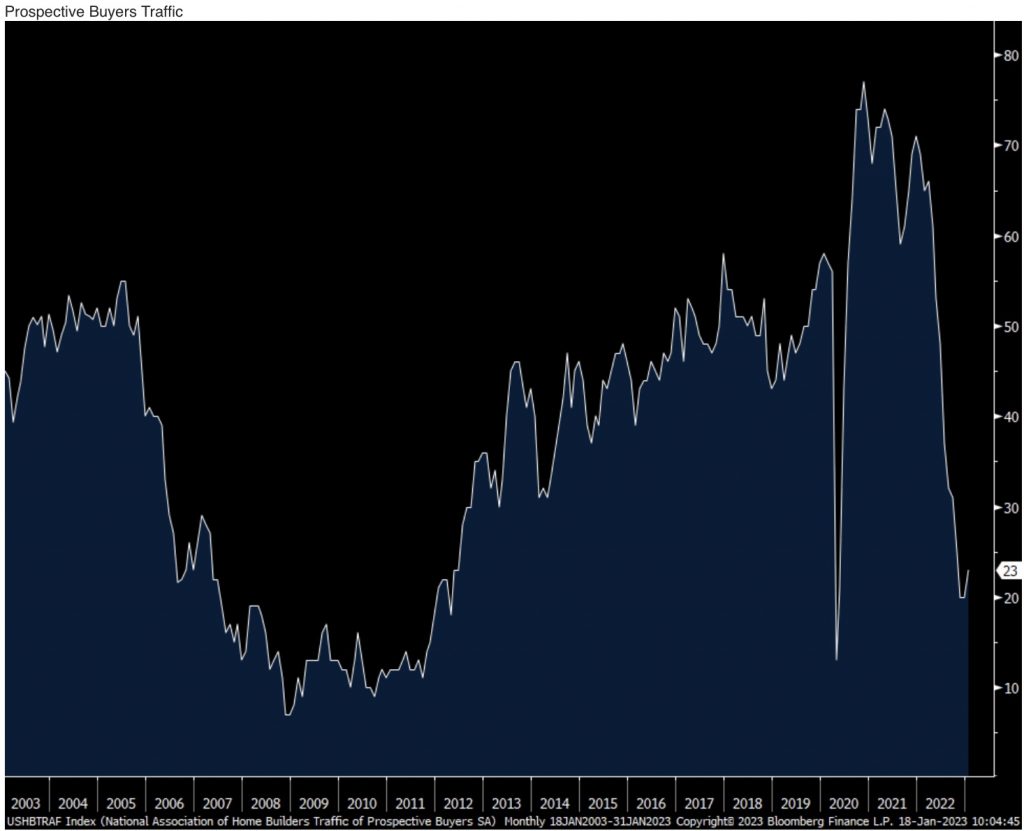 The bottom line according to the NAHB, notwithstanding the modest uptick in January, is that “sentiment remains in bearish territory as builders continue to grapple with elevated construction costs, building material supply chain disruptions and challenging affordability conditions.” In order to move product, “many builders continue to use a variety of incentives, including price reductions, to bolster sales.” Hopes are also apparent that mortgage rates have peaked and if the case, sales should stabilize but at current much softer levels. The key for 2023 remains to what extent do home prices fall in order to bring back more buyers, particularly the first time buyers who are struggling the most with affordability.