This is fueling gold’s surge back above $1,925 today. Plus inflation is killing restaurants.

Big royalty dog Franco-Nevada has one of the largest, valid, bullish rising wedges I have ever seen. This chart is a sign of what’s to come. 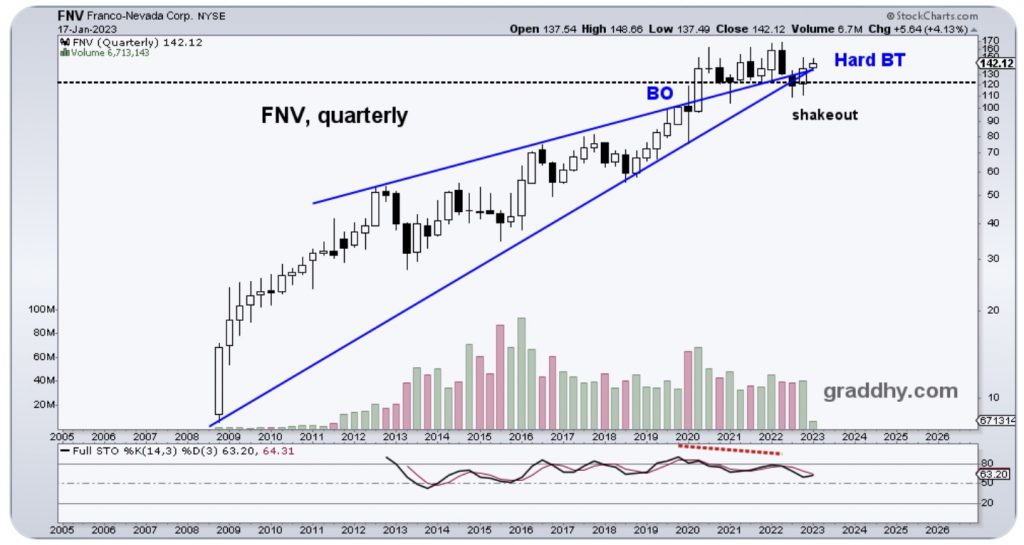 Gold
Ole Hansen, Head of Commodity Strategy at Saxo Bank:  Gold correction risk: ETF flows and risk reversals have remained flat for weeks with no sign of demand despite the recent rally. We believe the direction in gold is correct but the timing is wrong, raising the risk of a s/t correction driven by recently established spec longs. 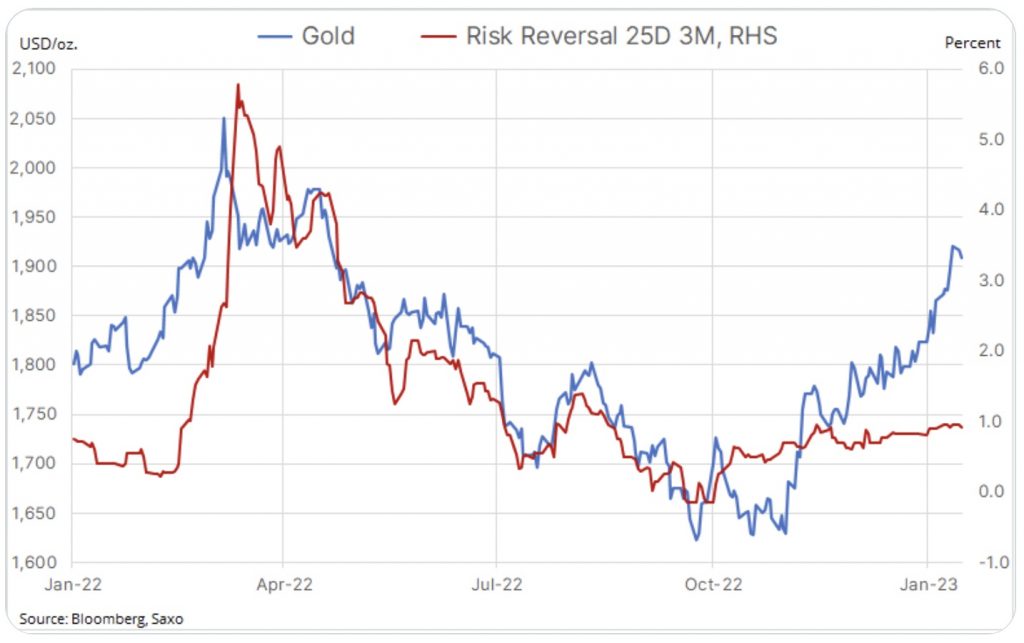 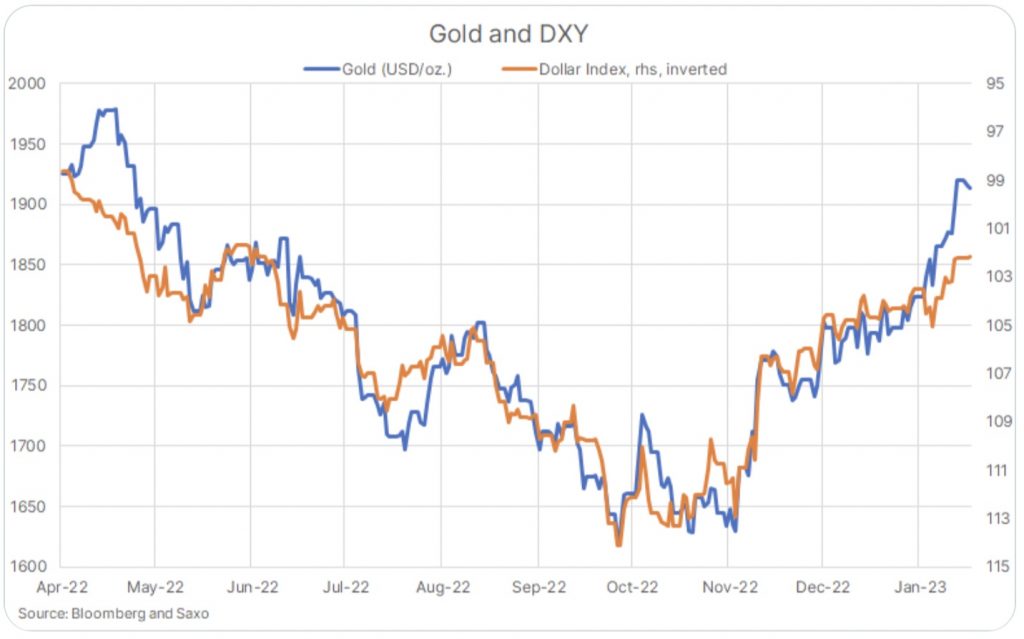 Monetary Madness In Japan Continues
Otavio Costa:  The cost of yield curve control in one chart.

Bank of Japan Balance Sheet vs GDP Near 140%! 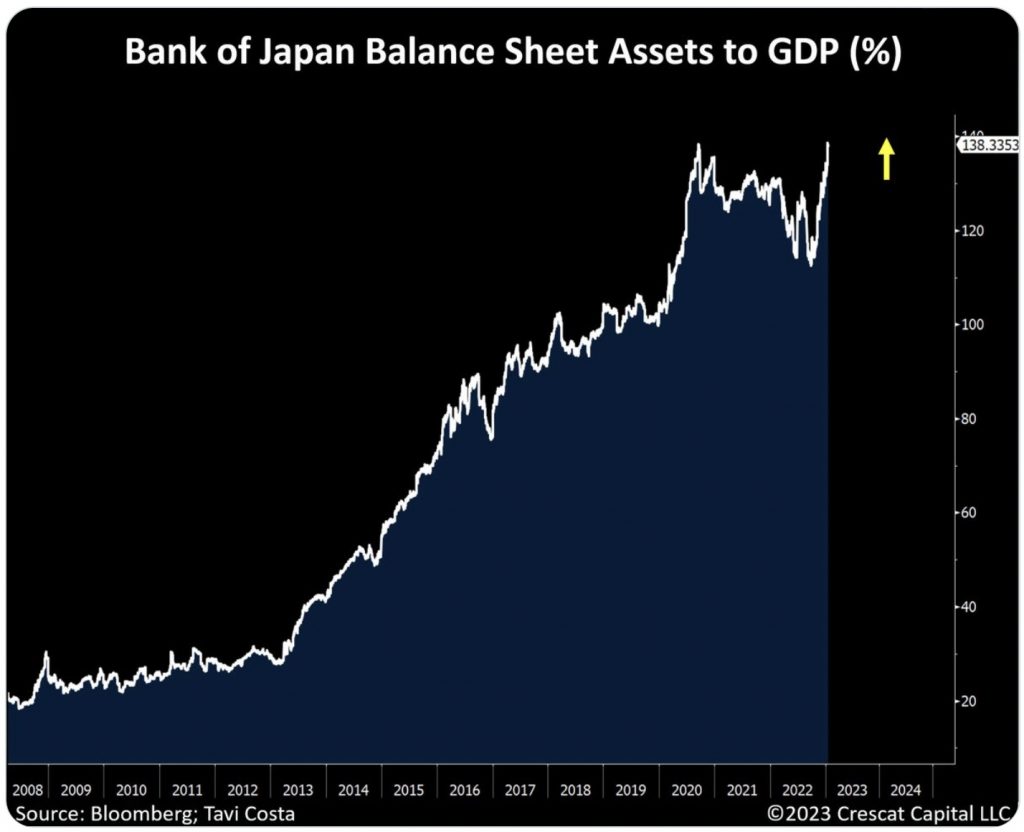 Inflation Crippling Restaurants
Gerald Celente:  In December, more than half of U.S. restaurants had trouble paying their rent, according to data service Alignable, compared to less than a third a year earlier.

Rising costs for both food and wages have spiked menu prices at a time when inflation is forcing consumers to pare back discretionary purchases, including eating in restaurants.

In the last quarter of 2022, full-service restaurants fed 16 percent fewer people than during the same period in 2019, research firm Placer.ai reported.

Already before the COVID War, 61 percent of restaurant meals were being eaten somewhere other than the eatery where the food was purchased, the National Restaurant Association’s (NRA) data shows…

That number has now reached 79 percent, thanks to online ordering and delivery services such as GrubHub and DoorDash.

“If there’s one thing the [COVID War] did for diners, it was to make them more comfortable with technology,” NRA senior researcher Hudson Riehle told The Wall Street Journal.

Americans now spend half of their food budgets on restaurants, the WSJ noted, but place a premium on ease and low cost, not on “the restaurant experience” in an age in which diners are pressed for time from morning to night.

Chains have the resources to invest in technology, particularly in automation, which cuts payroll costs and speeds operations, the WSJ said.

During 2020, about 10 percent of independent eating places went out of business, while only 2.5 percent of chain outlets met that fate, data from Morgan Stanley shows.

This year, chain restaurant growth is likely to reach 1.4 percent, the bank’s analysts predict, the first year since 2016 that the figure will rise above 1 percent.

TREND FORECAST:
What we said in “COVID War Killing Restaurants” is no less true today.

The restaurant business has always had a high failure rate, even in good times. In the COVID War, it was the first to suffer and may still prove the last to recover.

In any case, the face of the industry has been permanently changed.

It will be far more difficult for locally owned “Mom and Pop” eateries to start up, let alone survive, in an age defined by high costs, the growing use of technology, expanding encroachment by chains, consumers seduced by convenience… and not having enough money to go to above chain status restaurants.

The future of the restaurant business will be dominated by large chains with deep pockets, with fewer restaurants overall—which means fewer employment opportunities for the industry’s traditional labor force of young and low-skilled workers.