On the heels of wild week that included a missile attack against Syria, today one of the top money managers in the world spoke with King World News about a loss of faith in the American dream and why all roads lead to China and a new gold-backed monetary system.

Stephen Leeb:  “One of the most disquieting reports to come out recently has been that in the U.S. – in contrast to every other developed country – death rates have been rising among middle-aged, largely middle-class whites. At the century’s start, death rates for this demographic were roughly equal in the U.S., France, and Germany. Today death rates in the U.S. are more than 30 percent greater…

At first glance, that dispiriting trend might not seem relevant to the case for a big bull market in gold. But there’s a thread that clearly links the two.

The Loss Of Faith In The American Dream
It starts with evidence that much of the rise in death rates reflects despair from a loss of faith in the American dream, the country’s long-held belief that this is a land of opportunity where everyone who works hard can create a better life for themselves and their families. That used to be true but no longer is as declining productivity growth here has led to stagnating and declining incomes and living standards. Death rates have been pushed higher by growing middle class substance abuse, alcoholism, suicides, and other clear signs of hopelessness. The only real answer is to create an economy that is once again able to raise worker productivity.

That will require an all-out effort to improve the nation’s infrastructure, which has been woefully deteriorating. Good infrastructure is indispensable to an economy being able to function productively. If roads are in disrepair and you waste hours in traffic jams, that hurts an nation’s productivity as well as the that of each individual. And if that traffic jam occurred while you were on your way to the airport for a business trip and you missed your plane, a frustration even more likely to occur if the airport itself was old and inefficient, productivity further suffers. Whether you are talking about dams, roads, bridges, or the electric grid, infrastructure is key to rising productivity, rising standards of living and an all-around healthy economy. 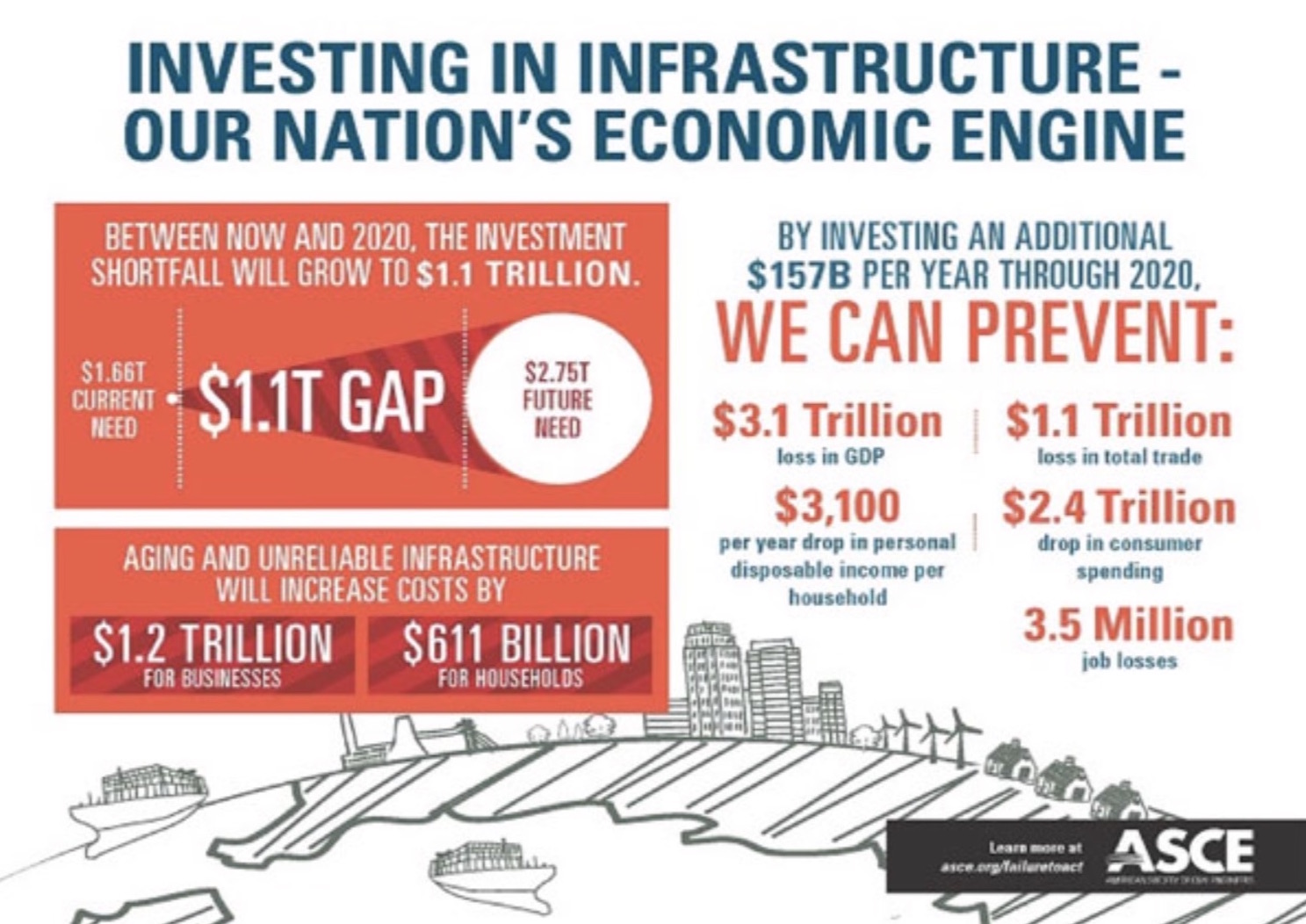 This brings me to the latest report card from the American Society of Civil Engineers (ASCE), which since 1998 has issued such reports every four years. Prior to that, starting in 1988, the report cards were issued by the American Public Works Association. The initial rating was a C, not great but not acceptable. Since then, though, they have ranged from D to D+. Of course, like any report card, the composite grade is an average of individual grades. The brightest spot has been the rails, which have moved up from a C- in 2005 to a B today.

Rails, one of the cheapest forms of transportation, are very important to the economy. The more that they handle the goods delivered between cities and to ports for overseas shipments, the more it helps trade and factory efficiency, spurring gains in productivity. Why have rails stood out? Thanks should go at least in part to the long-term thinking of Warren Buffett, whose immense capital expenditures on his wholly controlled Burlington Rail not only have improved that rail but also have likely encouraged other rails to upgrade so as to stay competitive.

By contrast, roads, electricity, water, schools, and other infrastructure have gone begging and get abysmal grades. These areas aren’t driven by long-term thinkers like Buffett, willing to make huge capital investments for a future pay-off, but by federal and local governments with time frames often as short as two years, and that tend to go for quick fixes rather than making long-term commitments.

A Staggering $4.6 Trillion Is Needed For Infrastructure Repair
In each report since 2001, the ASCE also has estimated how much money is needed to bring each infrastructure category up to acceptable levels. The totals have climbed from $1.3 trillion in 2001 to $4.6 trillion in 2017. In the past six years, the need has more than doubled, from $2.2 trillion to $4.6 trillion. Making plain the clear link between infrastructure’s growing inadequacy and productivity, in those same six years productivity growth has stumbled from 2.5 percent to less than 1 percent, the lowest in postwar history.

The impact on the entire economy will keep growing unless infrastructure starts to improve. According to the ASCE:

“From 2016 to 2025, each household will lose $3,400 each year in disposable income due to infrastructure deficiencies…Over time, these impacts will also affect businesses’ ability to provide well-paying jobs, further reducing incomes. If this investment is not addressed throughout the nation’s infrastructure sectors by 2025, the economy is expected to lose almost $4 trillion in GDP, resulting in a loss of 2.5 million jobs in 2025.”

Continued deterioration of infrastructure here wouldn’t just hurt millions of individual Americans and our overall economy, it also would hurt our place in the world. That’s because, other countries – and most notably China – are moving full steam ahead with superior infrastructure. Even in our best area, the rails, we come out badly compared to China. The U.S. has virtually no plans for high-speed railroads. The train that travels along the Boston-New York-Washington corridor, for example, has top speeds of about 150 MPH. China’s high-speed trains hit speeds of more 200 MPH, and are proliferating throughout the country. China already has 12,500 miles of high-speed rail lines, some 60 percent of the world’s total miles. It plans to have above 18,000 miles by 2020 and nearly 30,000 miles by 2030.

Some of these high-speed trains bring cities together into amalgamations that together are more productive. For example, making it easier to match job skills with job requirements. The World Bank has estimated that amalgamated cities improve productivity by 10 percent, which would mean a 10 percent gain in real incomes.

Longer term, the Chinese plan to knit together megacities by using trains whose speeds approach the speed of sound, which is 600 MPH. This will allow an amalgamation of more than 100 million people to function together in a wholly integrated network. A train traveling at 350 MPH or faster could unite Boston, New York, and Washington into a single integrated urban region.

Infrastructure does more than improve our economy, more than ameliorate angry and desperate middle aged, former middle class citizens; infrastructure is critical to defending our country and fighting wars, both on the ground and in cyber space. Just recall the interstate highway system, a project of President Eisenhower, the leader of the allied forces in WWII. Eisenhower’s was much more military – the ability to transport goods and men – than economic, though the economy clearly benefitted. 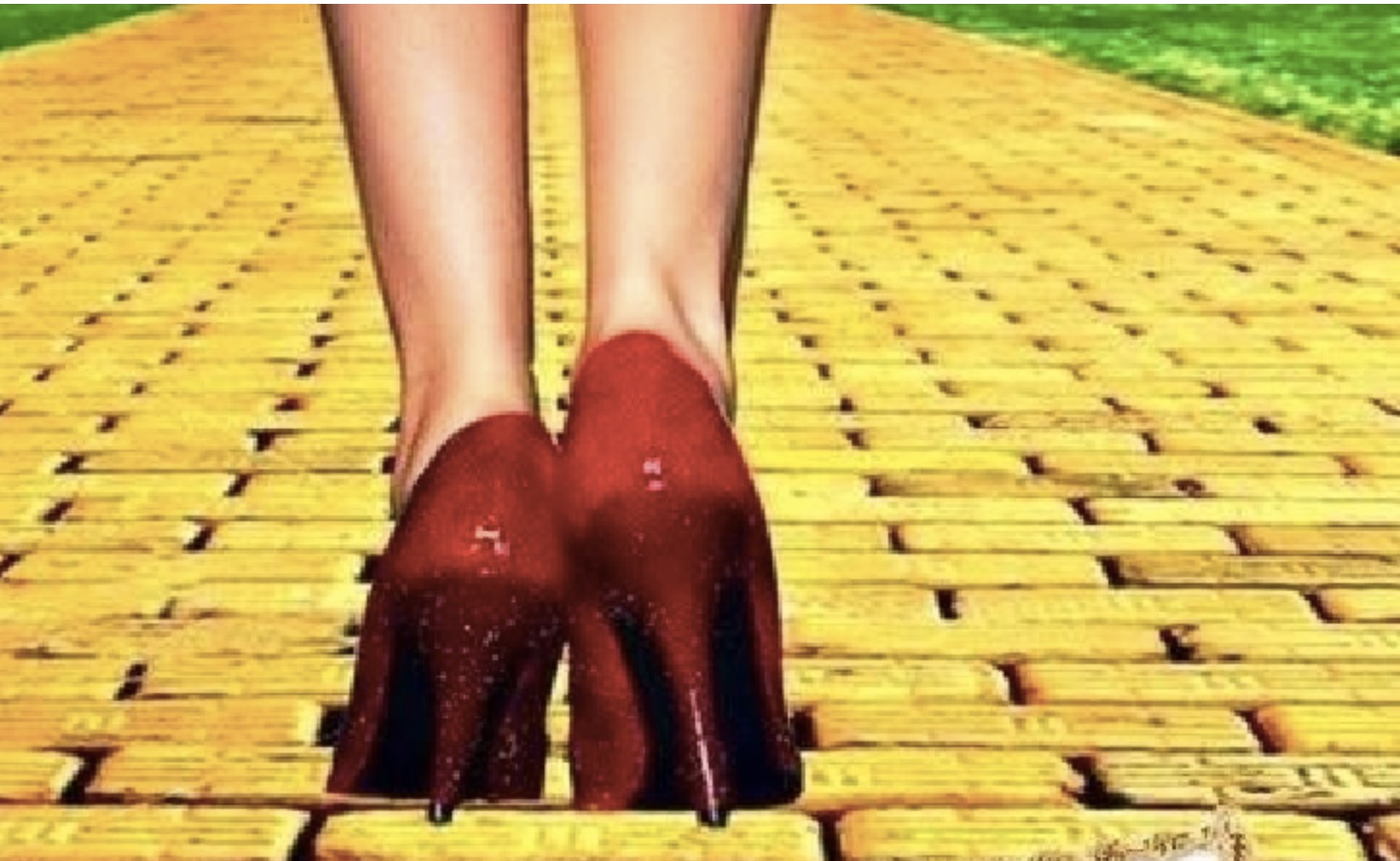 All Roads Lead To China And A New Gold-Backed Monetary System
China’s big lead in infrastructure brings me, finally, to the thread I noted at the start that links the rising death rates, the death of the American dream, and a weakening military presence to rising gold. China’s more vibrant economy will help underpin China’s ability to proceed with its goal of replacing the dollar-centric monetary system with a new monetary system linked to gold. Even if it only covers the East, it will be a major tailwind propelling gold’s rise. It’s why gold is an essential investment to get you safely and prosperously through the years ahead and into what we all should hope will eventually be better times for the U.S., if – and only if – the country wakes up soon to the dimensions of the infrastructure challenge. Meanwhile, protect yourself with gold.”