We have just seen one of the most epic collapses in 30 years.

A Crude Month
November 14 (King World News) – Here is a portion of an extremely important note from Jason Goepfert at SentimenTrader:  Crude oil has suffered one of its most epic collapses in 30 years and is the most oversold ever…

A Historic Oversold Reading
SentimenTrader continues:  It (crude oil) has lost a quarter of its value from a 52-week high in only 30 days, one of the fastest drops ever. And its Relative Strength Index has declined to the lowest level ever, dating back to the inception of the futures contract in 1983.

The RSI for crude oil has never been lower than it is now! 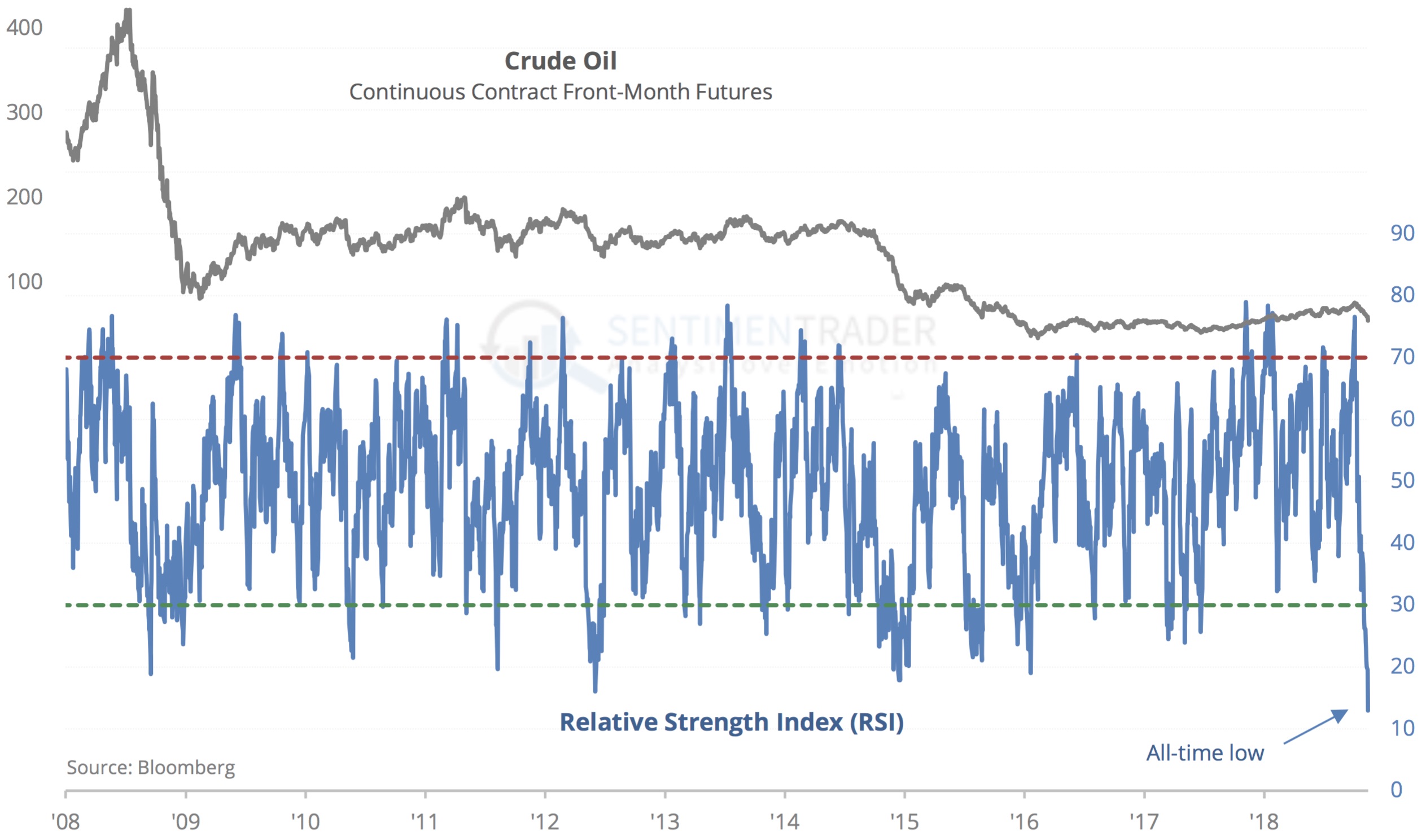 Here is a portion of today’s note from legend Art Cashin:  A Word From The Wise – Jeffrey Gundlach of DoubleLine Capital, had some recent words of warning. He said investment grade corporate bonds are the most overvalued in U.S. history. Here’s a bit of what else he said (from Reuters):

Gundlach said the U.S. corporate bond market is at its most vulnerable point to date and a wave of rating downgrades would be hard for the market to absorb. “If rates rise, you aren’t going to be very happy,” he said about further total return losses.

Gundlach said there are bear markets in homebuilders, autos and banks. “We’re starting to see a real decline in home prices from the major areas. That’s going to be a growing narrative because of the lack of deductibility for property taxes and state taxes in many of the high-cost areas. In many areas, inventories of homes are piling up. It’s really going up at a real rapid rate.”

Gundlach again raised red flags on the “suicide mission” the Federal Reserve has taken on with exploding deficits. Gundlach, who voted for President Donald Trump, said the driver of U.S. economic growth is deficit spending and borrowing from the future. “It is very bad that the deficit is rising” late in this economic cycle, he said.

Things were also mixed in Europe. London is trading fractionally higher. Markets on the continent are seeing moderate selloffs.

Among other assets, Bitcoin is softer, trading just below $6400. Gold is flat, trading at the $1200 level. Crude is trying to circle the wagons with WTI trading just under $56. The euro is a touch weaker against the dollar and yields are a tick, or two, lower.

Consensus – The oil collapse seems to have abated, at least temporarily. Also, reports circulate that the President may hold back on the auto tariffs for a while. Those two items have inspired a mild bid in the general equity market.

ALSO JUST RELEASED:ALERT: Art Cashin – We Haven’t Seen This In Over 300 Years CLICK HERE TO READ.

Trouble Is Now Spreading Across The Globe

A Fascinating View Of The War In The Gold Market