With continued uncertainty in global markets, here is a big picture look at what is happening around the globe, including China, Bitcoin and the US dollar.

China Is Not About To Sink Into The Abyss
November 7 (King World News) – Jeff Saut, Chief Investment Strategist at Raymond James:  So I am sittin’ on a dock of the bay here in Boca Raton Florida watchin’ the tide roll away as I wait to speak at a conference of insurance CEOs and CFOs. I have spoken at this annual event for the past 10 years, and it is always a “gas” because the attendees are terrific people. I love Boca Raton, although the traffic is absurd as it took me two hours to drive to Fort Lauderdale yesterday to visit with friends at Franklin Templeton (I really miss Sir John), and Rajiv Jain, portfolio manager of the Goldman Sachs GQG Partners International Opportunities Fund (GSIMX/$12.81), which I own (Rajiv). I first met Rajiv about a year ago when he became an outside manager for Goldman Sachs after managing $40 billion for a bank in Geneva. I know a lot of portfolio managers, but this guy is arguably the smartest guy in the room…

The day after I met him I bought GSIMX and I am very glad I did! Unsurprisingly, Rajiv and I are of the same belief in that we think the equity markets are into a secular bull market that has years left to run. Speaking to China, I have argued for the past eight years that China is NOT about to sink into the abyss and drag the entire world into a recession. Rajiv agrees and noted that the thing that shocked stocks in 2008 was the fact that housing prices collapsed and left the banks with worthless mortgages that threatened to implode the financial fabric of America. However, according to Rajiv that is not occurring in China; in fact, home prices are actually rising in China! Moreover, it is not just China whose economy is improving; a synchronized worldwide economic recovery is underway. No wonder the world’s bourses are rallying!

In addition to discussing the “state of the state,” we talk investing. When we first met, Rajiv suggested I look at certain large French banks that are conservatively run. His thought was that the then new President of France, Emmanuel Jean-Michel Frédéric Macron, was going to change the work habits of French workers (although everyone I know in France works harder than I do), which is why the French unions hate him. I learned from Peter Lynch, a long time ago when the Rust Belt was about to rebound (early 1980s), that while it may not be sexy to buy the banks when a region is going to recover, it tends to be a very profitable strategy. And while Raymond James does not cover the European banking sector, we commend this sort of investment approach when applied to our own coverage of regional banks. Of course, you can always get access to Rajiv’s ideas by just buying his fund; please check with our mutual fund research team for more insight.

Of interest is that while the S&P 500 and D-J industrial Average closed up on the week, the mid-caps and small-caps actually lost ground last week with the S&P Small Cap 600 surrendering some 1.5%. Internationally, Brazil got whacked (-4.9%), while India, Japan, and Europe all gained. Speaking to the S&P 500 (SPX/2587.84), all that index needs is six more sessions to cross the 500-day mark without a 5% correction, as can be seen in chart 1 (below). 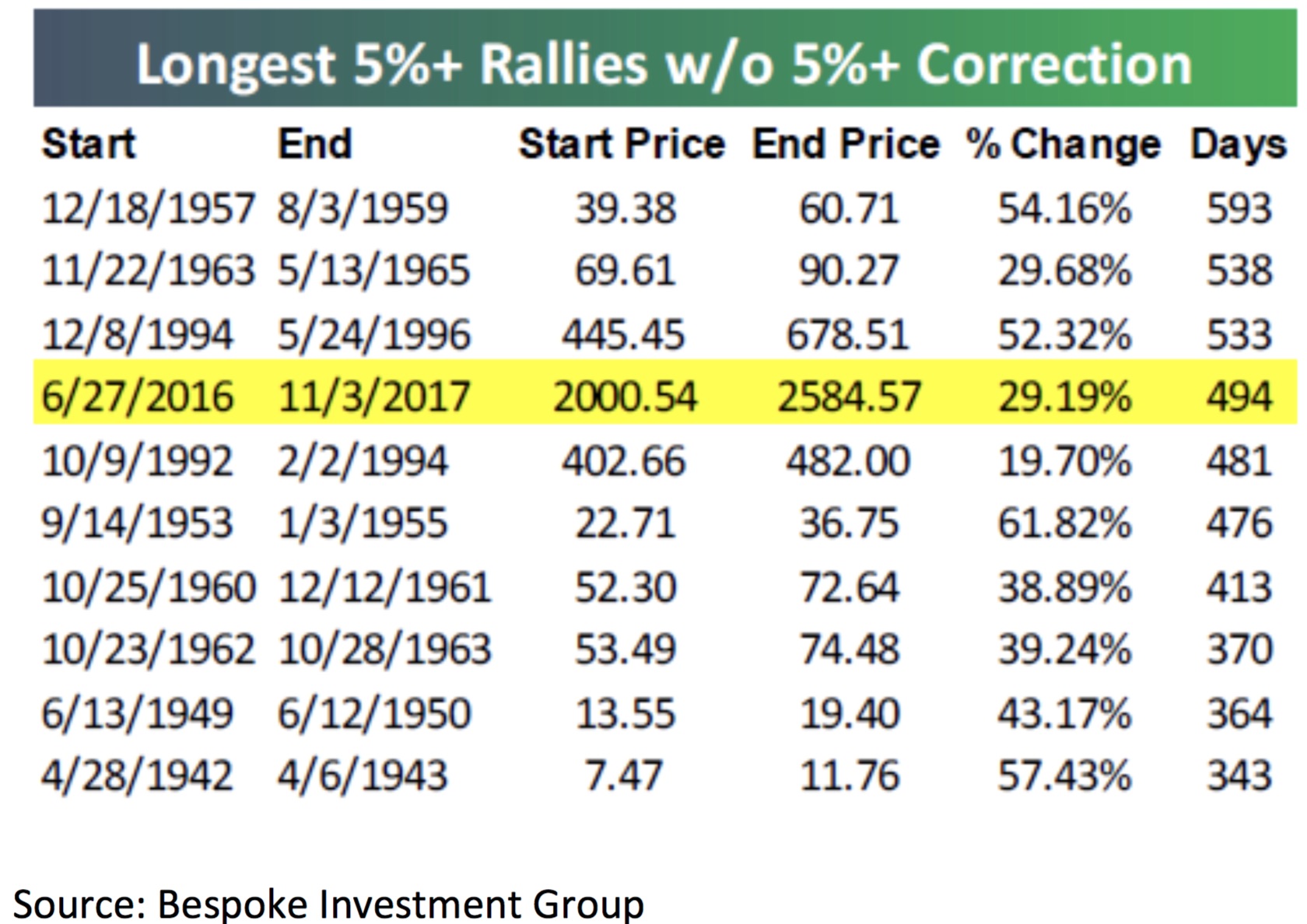 Last week’s “win” was basically driven by just two sectors – Energy and Technology – while underlying market breadth actually deteriorated. The SPX rally also has left the index at the top of its trading band and consequently pretty overbought (chart 2 below). 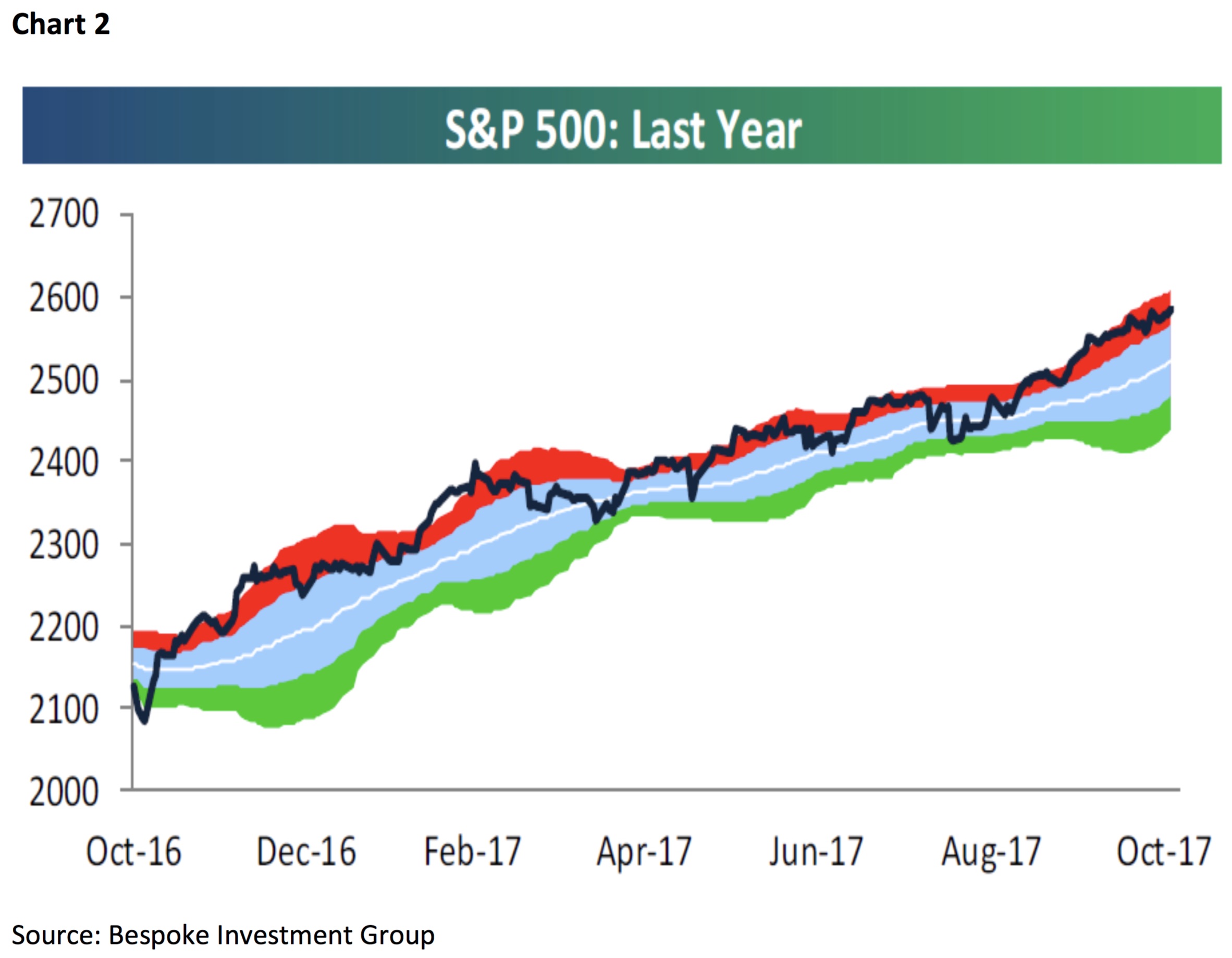 Of particular interest is that a favorite sector, namely Tech, is WAY overbought (charts 3 & 4 below). 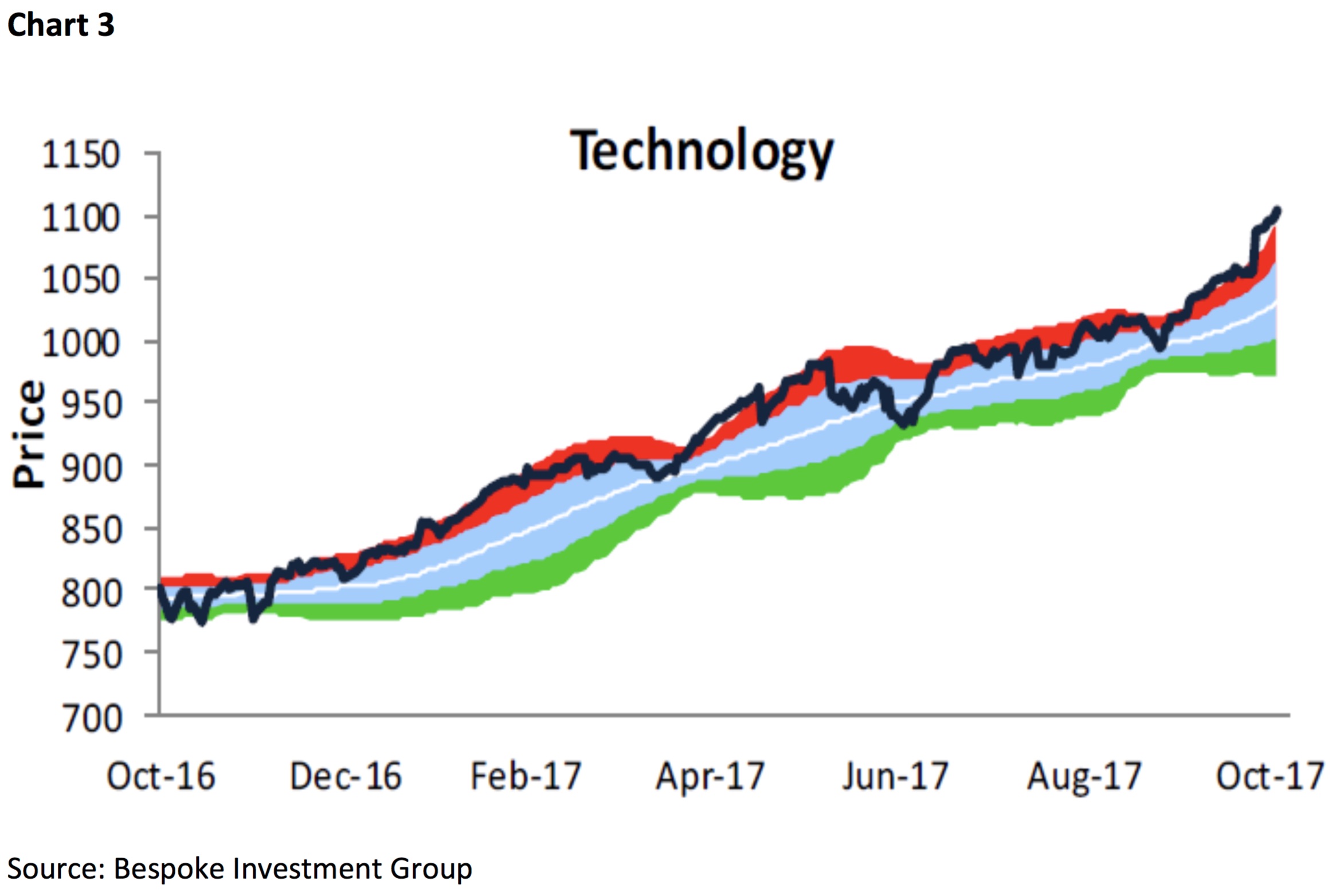 I did get a rather intriguing question at the conference – “How is the SPX up without the FAANGs stocks?” Coincidentally, that question can be answered by studying chart 4 (below). 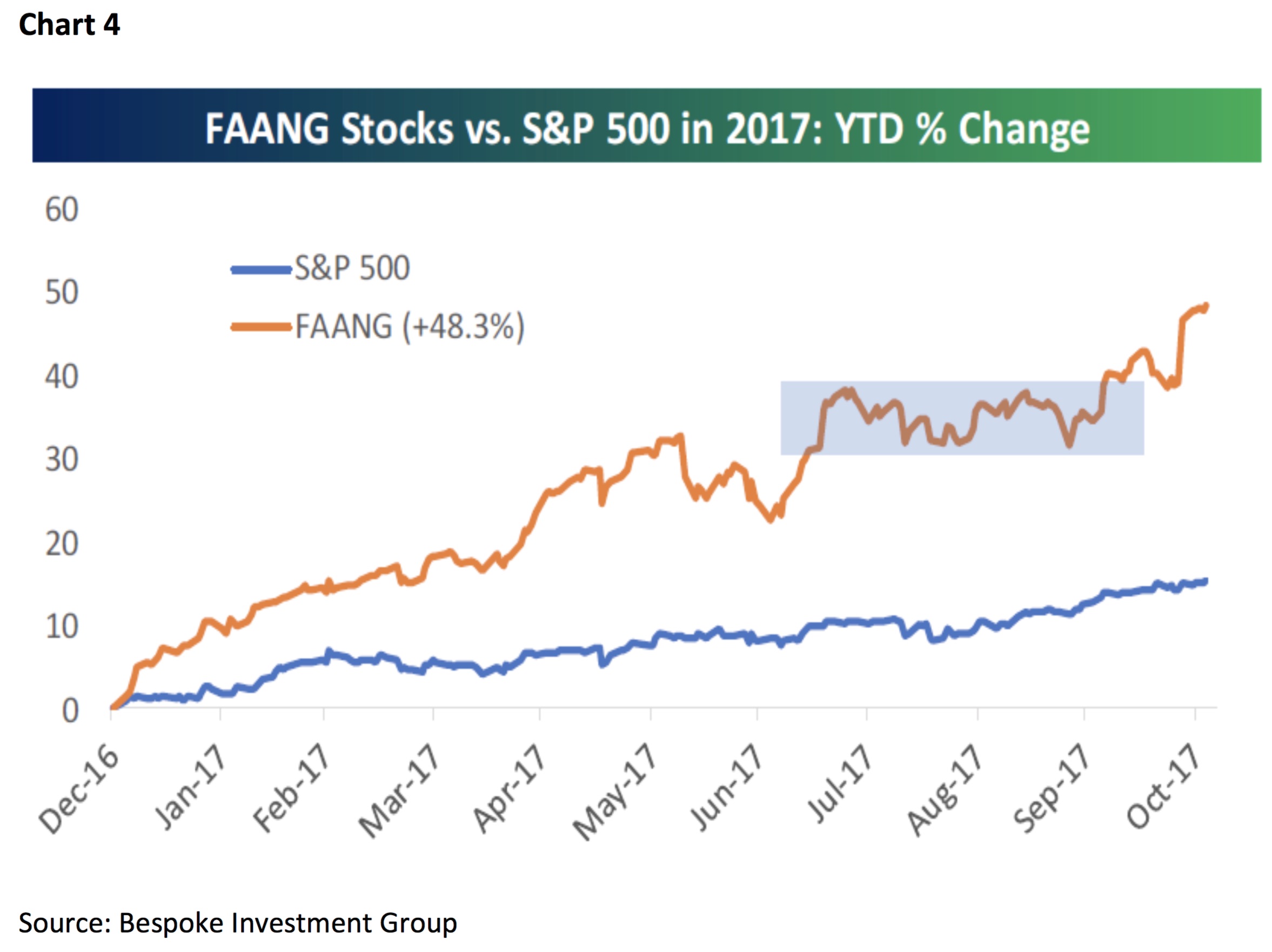 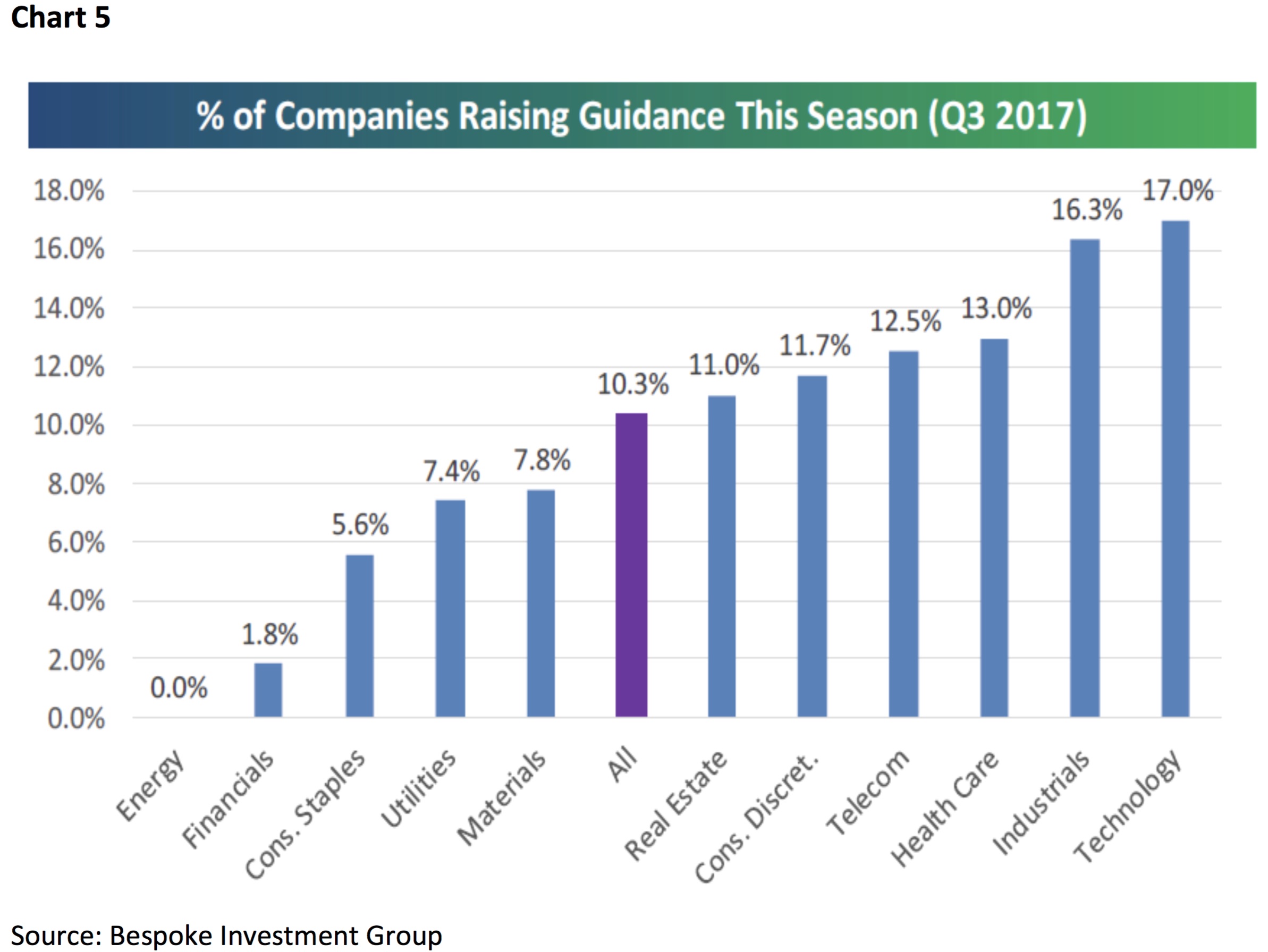 Also worth noticing is that the U.S. Dollar Index has been rallying (chart 6), which puts the wind at the back of companies that generate a significant portion of their revenues here in the USA (see chart below). 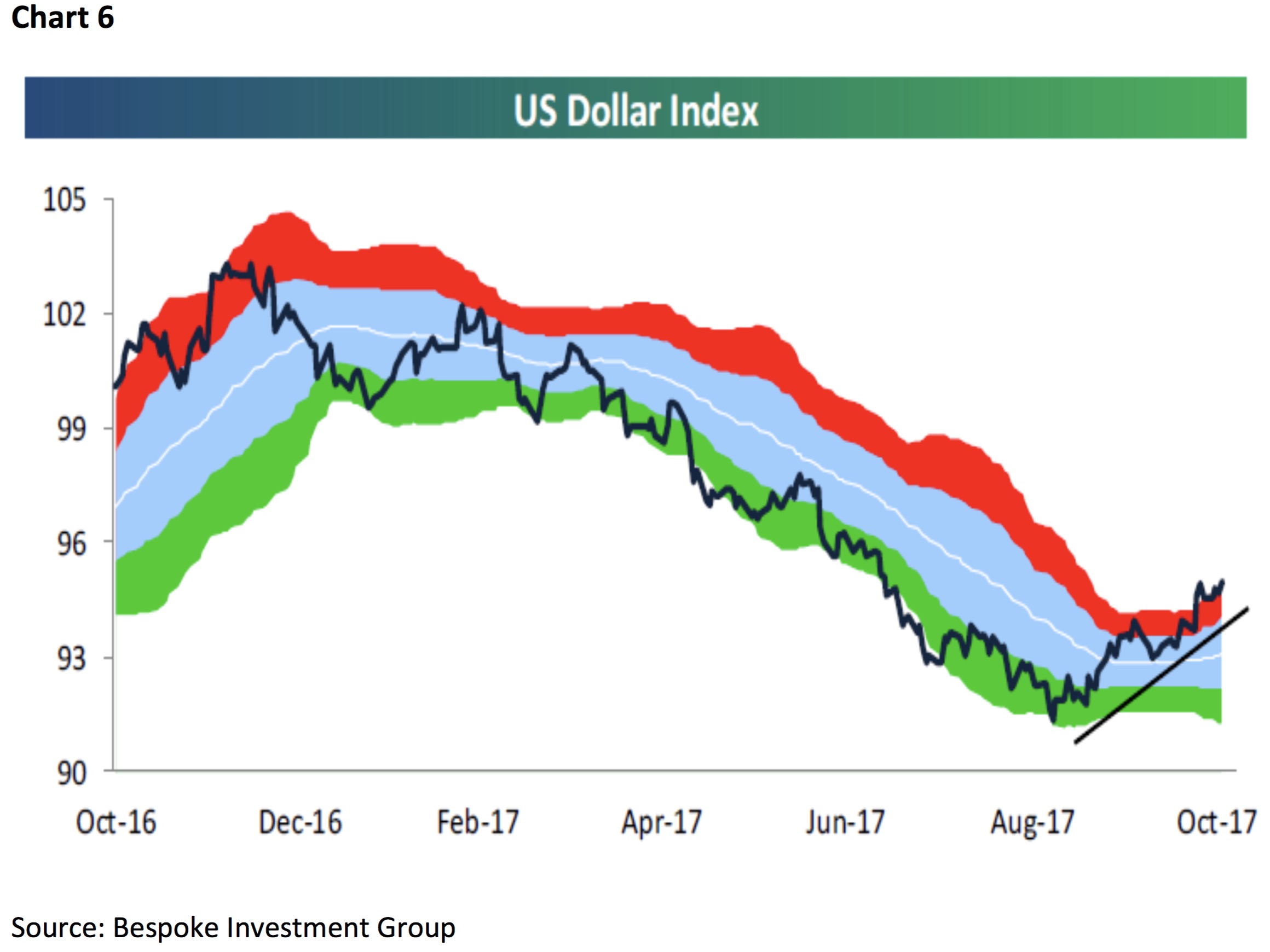 The reason for the “buck’s” strength is obviously the hint of higher interest rates, where the odds of a December rate ratchet have leaped (chart 7 below). 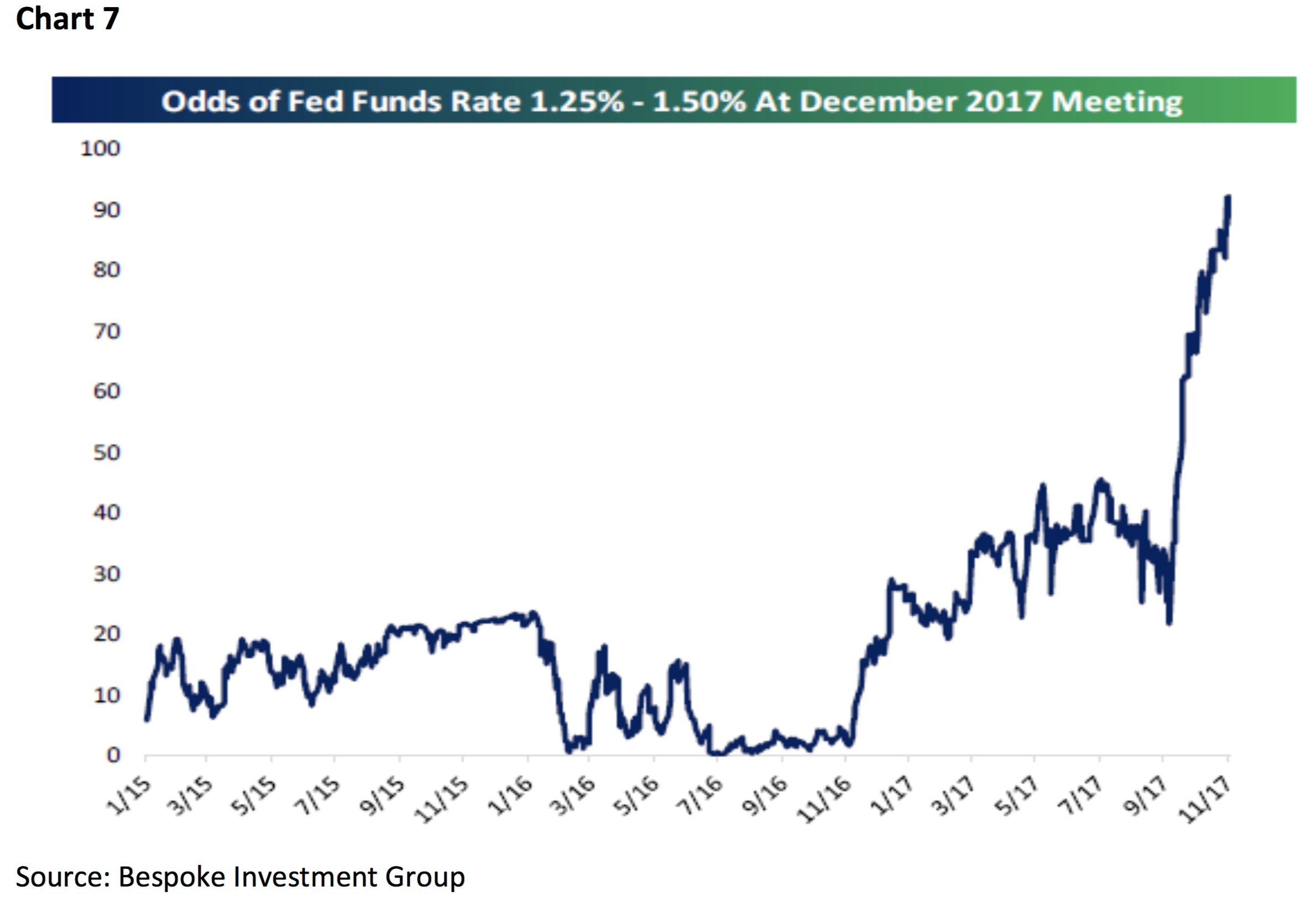 Crude oil has also broken out to the upside in the charts, lending more credence to our now year-long “call” that most commodities have bottomed. Indeed, looking at the Commodity Research Bureau’s index (CRB) of 18 commodities shows that on a trailing rolling 10-year return said index has a negative return, which has not happened since the 1930s. The CRB chart is reminiscent of the same chart we showed of the S&P 500 in late 2008 and early 2009, which was similarly configured with a negative 10-year trailing return that had not happened since the 1930s. 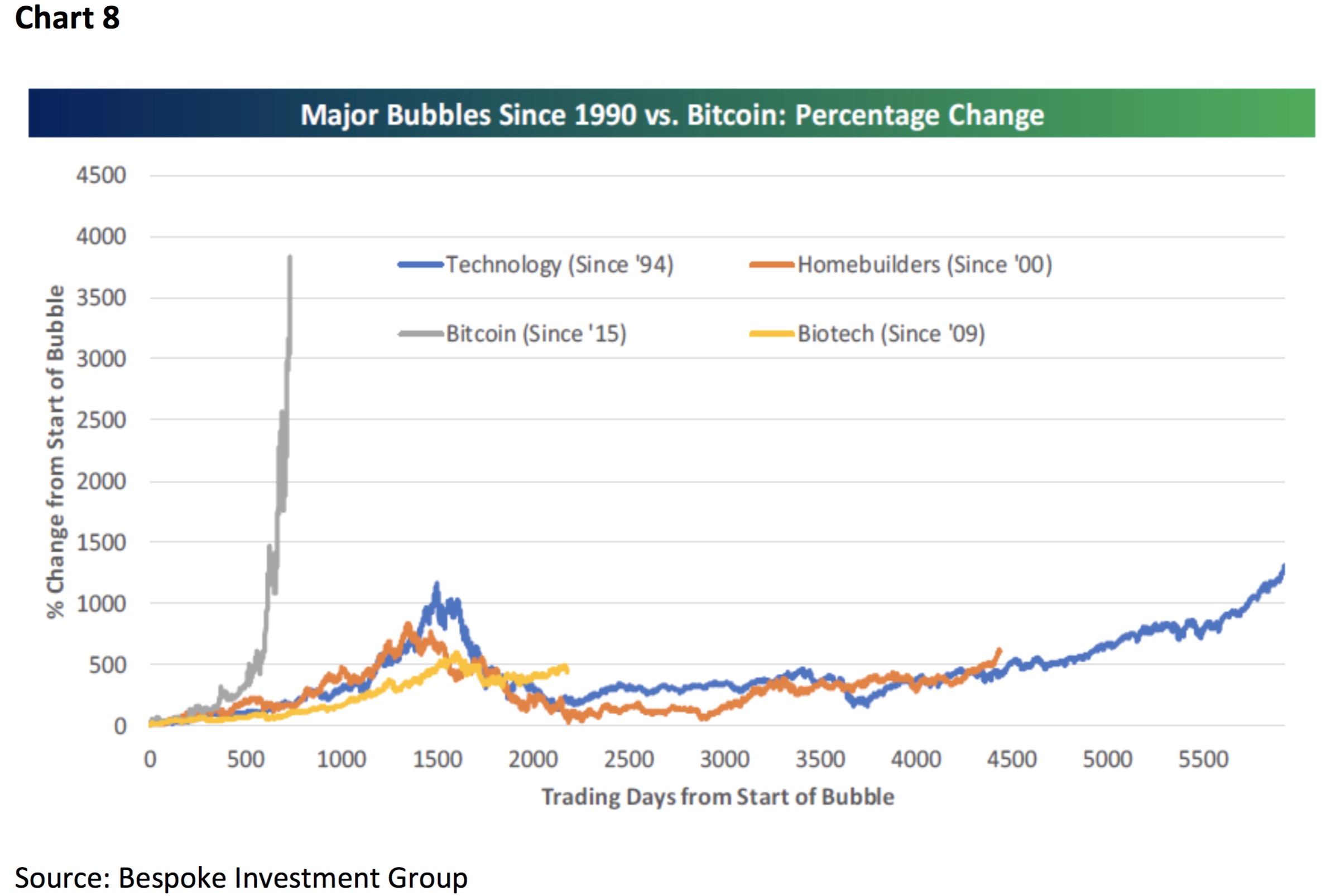 So our cautious stance on stocks for the past six weeks has proven wrong, although we still have found some names to buy despite our near-term cautious stance. Of course such short-term “trading calls” are just that – trading calls – all within the context of a secular bull market that has YEARS left to run.

The call for this week: I went back and studied my notes dating back to the 1960s and after ALL the rallies like we have seen since the November presidential election (the runaway rally that we called), most of the gains have been given back in a “selling stampede.” Not that we are predicting an end to the secular bull market, for we are not, but there is NO exception to the subsequent outcome. The only time stocks have not suffered such an outcome has been at the start of a huge up move. Obviously, we are not at the start of a huge up move.

King World News note:  For what it is worth, we do not think that “a synchronized worldwide economic recovery is underway,” but we do believe that this great central bank money printing experiment will end in tears.  In other words, nothing in history supports a country or countries printing their way to prosperity.  We do not believe this time will be the exception.  Having said that, Jeff Saut is one of the best in the business and we have all the time in the world for his thoughts on the markets as well as the economy, especially his belief that China and its economy will not sink into a black hole.

***ALSO JUST RELEASED: This Continues The Astronomically Abnormal Market Activity Over The Past Week CLICK HERE.