Today a 60-year market veteran warned King World News that the elite may make a terrifying move as their power to hold the system together collapses and gold soars to $5,000 in 2016.

IMPORTANT:  The King World News site was taken offline by the powers that be shortly after the interview with Chris Powell and the audio interview with Andrew Maguire were posted.  The staff has been able to bring the site back online and we will continue to do our best to stay online.

Eric King:  “Ron, can you talk about this chart (featured below) that you just sent to me?  This is a fascinating long-term chart that shows a bottoming process to this cyclical bear market, inside of gold’s secular bull market.  Now that this bearish phase is coming to an end, the first pulse higher as gold reenters its bullish upside thrust projects to $4,700 on this chart.”

Ron Rosen:  “The old-timers like myself are all familiar with Welles Wilder.  He was without a doubt the best market technician who ever lived.  The basis of that $4,700 target you see on the chart is taken from Welles Wilder’s work….

“The $4,700 gold projection is a delta long-term #1 target, which is where the biggest moves take place.  This chart below also shows that there have been three major turning points so far in gold’s 16-year bull market. 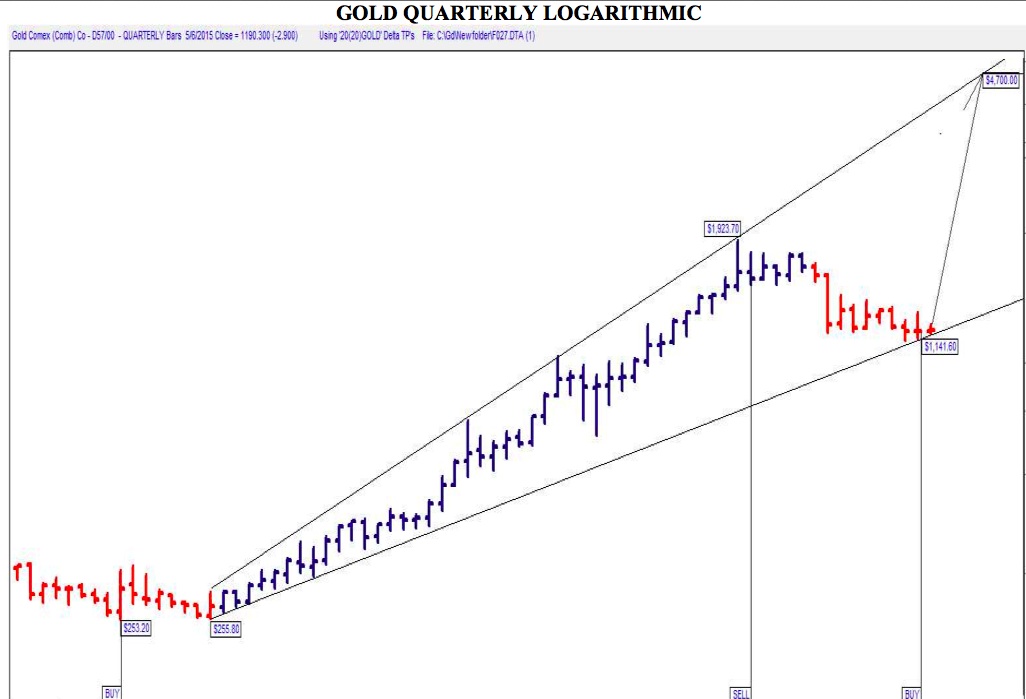 You can see the first buy point that was triggered in the gold market in 1999 at $253.  You can also see where the sell point was triggered right near the high of $1,923.70.  But now we have a buy signal that has been triggered at $1,141.60 — the second major buy signal of the secular bull market in gold (see bottom labels on chart above).

This chart shows the target for gold is between $4,500 and $5,000.  I would not be surprised to see this target achieved in a violent manner that will shock the financial world.  Meaning, I expect this $4,700 target will be reached in 2016.  That may sound insane to people who have not been around markets for 60 years, but that’s what bull markets do — they surprise people on the upside.”

Eric King:  “We saw the brutal 47 percent plunge in the gold price from 1974 – 1976, after gold had spiked from $35 to $204.  This cyclical bear phase has been longer in duration, although the percentage of the correction has been smaller.  But the duration of the cyclical bear phase has worn out most people and only the veterans with strong hands remain in the gold market at this point.  What about the arrogance of the Western central planners, where people now seem to believe, as Bill Fleckenstein said, that they are going to lead us to the Promised Land?”

Ron Rosen:  “There is only one entity that is going to lead us to the Promised Land and that’s Mother Nature.  This long-term chart of gold represents her work.  Mother Nature will have the final say in the gold market because it is the most important market in the entire world.

The gold market has destroyed every single attempt by mankind to create and to maintain fraudulent fiat paper money systems, and this time it will be no different.  The arrogance of Western central planners won’t make a damn bit of difference in the end because they are finished.  Their power is already receding.  They are done with.  It’s simply a matter of time.

The only way they will retain their power is to take over the entire Western world with armies by declaring martial law.  At that point we would no longer have a democracy; instead we would have a dictatorship, but I don’t believe that’s going to happen.  But either way, Eric, markets are bigger than governments, and that is why, in short order, the price of gold will be heading near the $5,000 area.” ***ALSO JUST RELEASED: Andrew Maguire – China On The Brink Of Winning The Gold War Against Corrupt West As Gold And Silver Prices Set To Skyrocket CLICK HERE.

Is The Silver Price About To Be Unleashed On The Upside?