Despite today’s pullback in the gold market in early trading, gold continues to paint a very bullish picture, plus the big picture for the Fed in 2020.

Gold Close To Major Breakout
December 12 (King World News) – Top Citi analyst Tom Fitzpatrick:  A weekly close above this $1,480-$1,490 would suggest an impulsive rally similar to what we saw in June-August this year (see below). 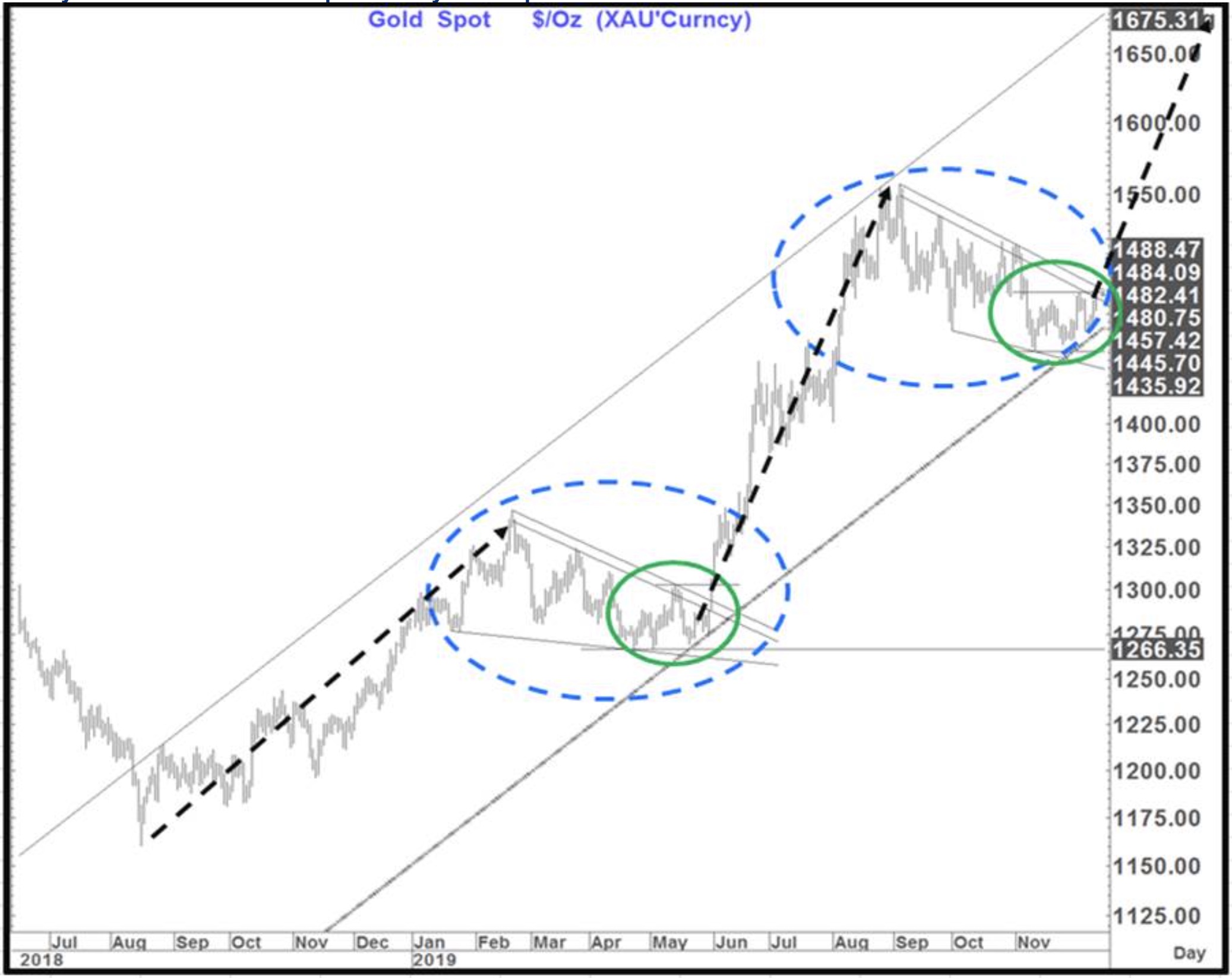 On this day…
Art Cashin:  On this day (+1) in 1917, French generals determined to lift sagging morale by shipping about 1000 men toward home for the Christmas holidays. These men had served on the Italian front and so, therefore, the trip home would be by rail across the high passes of the French Alps.

As often happens in war, particularly this war (which would be WWI if you happen to be burdened with an MBA), there was a bit of an equipment shortage. They had enough primitive passenger cars to make up two standard nine car trains. But they only had one engine and one engineer. So the generals insisted on coupling all of the cars together. They even found another one in the yard.

But as they loaded all the troops onto this oversize nineteen car train, the engineer balked. The air-brakes on most of the cars were antiquated and leaky. The trip would not be safe he said, and he refused to go.

The generals explained that once the military mind is made up logic cannot dislodge it. They offered to shoot the engineer if he wished to disagree.

As the train descended at a sharp angle from a high pass toward Modane, France the engineer tried, gingerly to apply the shaky brakes. Given their condition and the steepness of the descent, the brakes locked at first. The locked brakes caused the wheels to send out sparks which then ignited the wooden floor boards of some of these old cars.

Meanwhile, the pressure of the oversize load caused the already locked brakes to snap. Now the train began to plunge forward, out of control, racing over 90 miles per hour. The wind whipping by at 90 mph turned the floor board fires into a series of infernos.

Careening at full speed down the track, the train approached a sharp turn. The engine made the turn. The other nineteen cars left the track and hurtled one car after another into a wall near town. The wreckage turned into a near bonfire. Only about 600 soldiers were killed. The other 500 were simply badly burned, crippled or otherwise impaired.

All military snafus don’t occur on the front lines.

There was certainly no wild careening on Wall Street Wednesday. The wait on the FOMC decision seemed to limit the range and volatility of stocks.

The Dow was the underperformer among the indices, as it was weighed down by Boeing and Home Depot.

Stocks tried for a morning rally but it seemed to stall as they neared Tuesday’s intra-day highs. After the stall, they pulled back into late morning and then went into a sideways drift as they awaited the FOMC.

Stocks began to move up as soon as the statement was released at 2:00.

There were no signs of dissent and that indicated to markets that the FOMC was relatively unified in letting rates stay right where they are through all of 2020.

Stocks got a further leg up when Powell began his press conference. He indicated that he would need a significant and sustained move up in inflation before he would raise rates.

The market held onto its gains as the press conference ended. They then rallied into the close, thanks to over a billion dollars to buy on balance on the bell.

It was a solid day for the bulls as breadth moved to an all-time high. That hints that the rally itself is broadening.

Another View Of The Statement Of Economic Policy (SEP) – The smart folks over at DataTrek had some interesting observations on the SEP. Here’s one of them:

The most eye-catching line of the SEP was the projected path of Fed Funds policy rates created by the “Dot Plot” estimates supplied by committee members:

Conclusion: the Fed wants to portray itself as 1) solidly in lockstep that rates are appropriately set for the year ahead and 2) biased to ease I measured inflation remains below their goal, which explains why markets are betting their next move is a cut, but not soon...

The assumption by the futures appears to be that the Fed’s next move may be a cut and that it will come late next year in response to some economic slowing.

London is up modestly as the U.K. goes to the polls. Paris and Frankfurt are seeing the mildest of plus ticks.

Among other assets, Bitcoin continues to churn just below $7300. Gold and oil are trading slightly higher.

Consensus – Latest polls hint that today’s British election may be tighter than many expected.

Christine Lagarde will make her first appearance since succeeding Draghi.

***To listen to James Turk’s KWN audio interview discussing the gold and silver markets and what to expect next CLICK HERE OR ON THE IMAGE BELOW.

An Astonishing Look At The War In Silver And Commodities