On the heels of another chaotic trading week in major markets, today one of the top economists in the world sent King World News an incredibly powerful piece warning that there is no escaping a historic and devastating crisis as unprecedented worldwide panic and economic carnage is dead ahead.  Below is the fantastic piece from Michael Pento.

June 27 – (King World News) – Investors are obsessed over predicting the timing of the Fed’s first interest rate hike. Will the Fed raise the Fed funds rate in September, or wait until next year? But it is far more important to get a grasp on the pace of rate hikes. Will it be a one and done move, or does this mark the beginning of an incremental tightening cycle?  Those of us who are not in the inner circle are forced to speculate….

But one thing is certain: If history is any guide, whatever they do, the Fed will get it wrong.  Most market commentators place unfounded belief in the Fed’s acumen. But the truth is: I wouldn't trust the Fed to tell me what the weather is going to do in the next 30 seconds — even if they were looking out the window.

Bursting Bubbles And The Coming Disaster

Once you understand the nature of bubbles—how they are created and how they burst—you can be assured this latest manifestation will also end in disaster.  If the Fed raises rates as the dot plots suggest, it will quickly burst the bubbles already created in the real estate, stock and bond markets. On the other hand, if the Fed opts to only make a small token move higher in the cost of money, it will allow asset bubbles to spin out of control until inflation destroys the vestiges of economic growth.

There Is No Escape

Our central bank has been deluding itself into believing it can easily escape from its nearly $4 trillion expansion of the monetary base and seven years of virtually free money. But that is a spurious belief. Bubbles never die slowly and always bring about dire consequences. The bigger the bubbles, the worse the backlash — and never before in the history of economics have central banks distorted market prices to this extent.

All bubbles share the conditions of the asset being overpriced, over-supplied and over-owned when compared to historical norms. And all bubbles are built on a massive increase in debt. For examples; the tech bubble was fueled by a rapid increase of margin interest, and the housing bubble was fueled by the ownership of properties with little to no equity. Bubbles always sit atop a humongous pile of borrowed money. Today we have a tremendous amount of margin and leverage in both equities and fixed income assets.

For example, we see in this chart from the NYX data website that the percentage growth rate of margin debt vastly outstripped S&P 500 returns in real terms just prior to the collapses of 2000 and 2008. 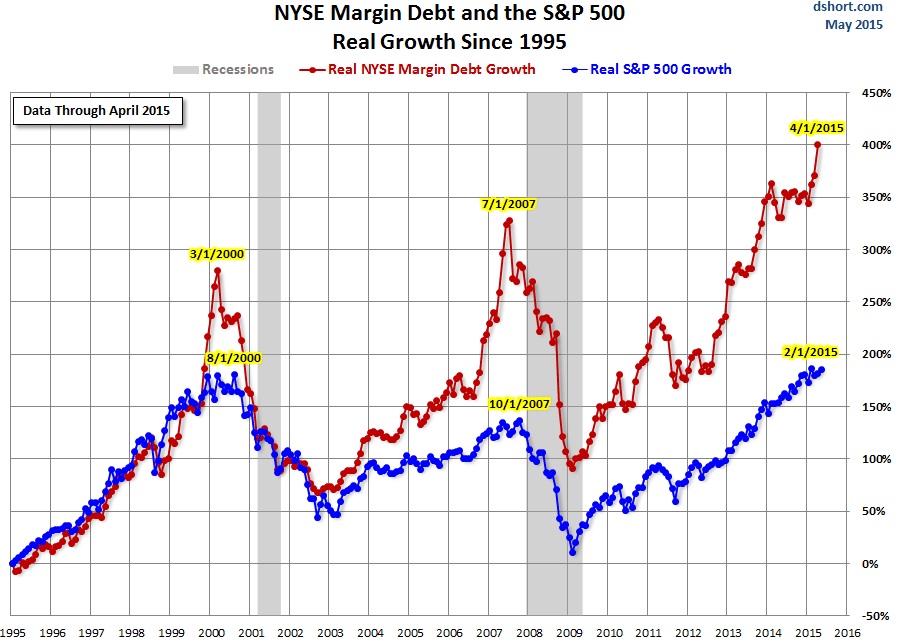 Continued debt accumulation makes sense if the underlying asset is increasing in price. Once the principal of the asset stops rising, there is a massive unwinding of leverage, which causes the asset in question to plummet in value. Why do asset prices stop increasing in price? Because the spigot for new credit gets turned off once the cost of borrowing funds becomes unprofitable for banks and/or consumers.

This is why true bubbles always bust in violent fashion. Overleveraged buyers are forced to panic out of the investment as soon as its price plateaus. And that panic selling begets more selling until there is a total washout of marginal buyers; that is, until prices can be supported easily by highly liquid investors.

The Fed wants investors to believe it can raise interest rates at the absolute perfect pace that will not deflate the bubbles in equities, real estate and all fixed-income classes. But this a just a sophomoric and quixotic fantasy.

If the Fed raises rates expediently (in other words, gets ahead of the inflation rate in a short time) the yield curve will flatten out more quickly than in past tightening cycles. This is because the spread between the Fed Funds rate and the belly of the yield curve is at a historically low starting point.

And importantly, the Fed won’t be raising rates in an environment of robust inflation, as in the norm: instead, it will be raising rates just because it has become exceedingly uncomfortable being at the zero-bound range for so many years. Once the yield curve flattens or inverts, the money supply will get chocked off and asset prices will tumble into a deflationary death spiral similar to what occurred in 2008.

Desperation Will Grip The Markets

On the other hand, if the Fed stays at zero, or does a token one-and-done move on rates, asset prices will become even more grossly distorted in the immediate future. Then, after several more quarters of free money and asset bubble growth, the rate of inflation will begin to pick up serious momentum—especially since the rise in the dollar on the DXY from 80 to 100 during the past year will quickly unravel.

In this case, pressure building up on long-term rates should explode suddenly and in a violent manner. Rates will soar not because the Fed is increasing short-term rates but precisely because the free market will awaken to the idea that our central bank has, at least temporarily, caused inflation to become intractable.

The Fed’s “success” with creating inflation and the concomitant spike in long-term interest rates will, by definition, pop the fixed-income bubble, which will then cause a pernicious collapse in real estate, most equities and the economy as a whole. There shouldn’t be any doubt that spiking long-term rates will become the bane for the additional $8 trillion increase in non-financial debt piled onto the U.S. economy since 2008.

Our view at Pento Portfolio Strategies is that the Fed will take the latter approach and cause the rate of inflation to grow at dangerous and intractable pace. But a prudent investor needs to be prepared for either scenario because the slope of the central bank’s increase in the Fed funds rate will be crucial in determining the outcome. And the investment strategy is vastly different for each situation.

Unprecedented Worldwide Panic And Economic Carnage Is Dead Ahead

Nevertheless, the most important take is to be aware that an unprecedented period of market and economic turmoil lies just ahead. You just need the proper knowledge to be able to profit from it. ***The remarkable audio interview with Michael Pento has now been released, where he discusses the coming carnage in global markets, what investors can do to protect themselves, and what to expect from gold and silver, and you can listen to it by CLICKING HERE OR ON THE IMAGE BELOW.

***ALSO JUST RELEASED: Paul Craig Roberts Warns That The Greek Government May Be Assassinated In This Crisis If The Pivot East To Stop World War III CLICK HERE.

If you are interested in purchasing physical gold and silver for delivery you can call Steve Quayle or his staff at (406)586-4842, or you can email them at [email protected] or [email protected]tals.com 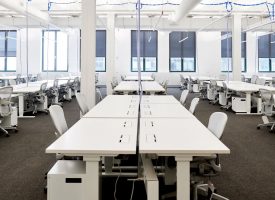 CEOs TO WORKERS: Back To The Office – NOW