A glance at the (monetary) history books leads us to a clear conclusion: the fundamental arguments in favor of gold are more convincing than ever. The efficacy of monetary policy measures becomes ever more questionable, risks are rising. Mohamed El-Erian compares the behavior of central bankers to that of a pharmaceutical company that forces the market to take a medication that has never before been clinically tested. Investors should not only focus on the near-term successes of the treatment, but also consider the long-term side effects.

In the middle of the 19th century, the laws of thermodynamics provided the formal foundation for the understanding that it is impossible to create energy out of nothing. Analogous to this, central banks and governments are currently trying to create an increase in prosperity out of nothing. Such a monetary perpetuum mobile would be quite desirable for humankind, however, historically such attempts have at best led to a brief sugar high followed by a major hangover.

Total US Credit Market Debt as a % of GDP 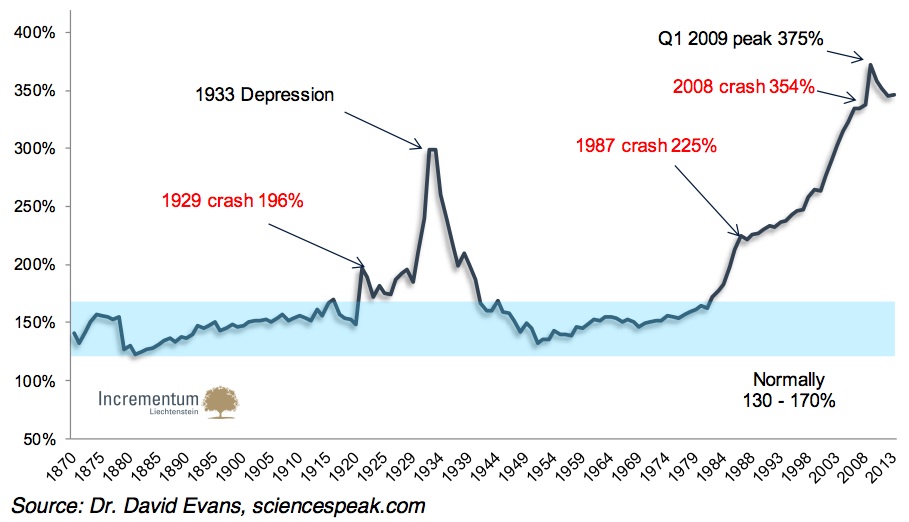 Japan's Abenomics program is in our opinion emblematic for the “Keynesian endgame” currently underway. It is a final desperate attempt to keep a debt dynamic going that must sooner or later collapse. We also see Japan as a harbinger of what the West will soon face as well. A painless way out of this situation is by now unthinkable.

If one wants to understand the future, one must look at the past. Future problems are always rooted in the crises of the past. The West is still at the beginning of its great paper money experiment – 43 years is not a long time period for a monetary order. The Austrian School of Economics not only poses the correct questions in this context, it also provides the correct answers. The root of the calamity is the unbacked, government-regulated monetary system. Together with a growing number of economists, we are convinced that the global monetary system needs an anchor again. Gold can play an important role in this context. Change will not come overnight through a central institution, but is rather a long-term process that has already begun.

Global financial assets are increasing faster than ever 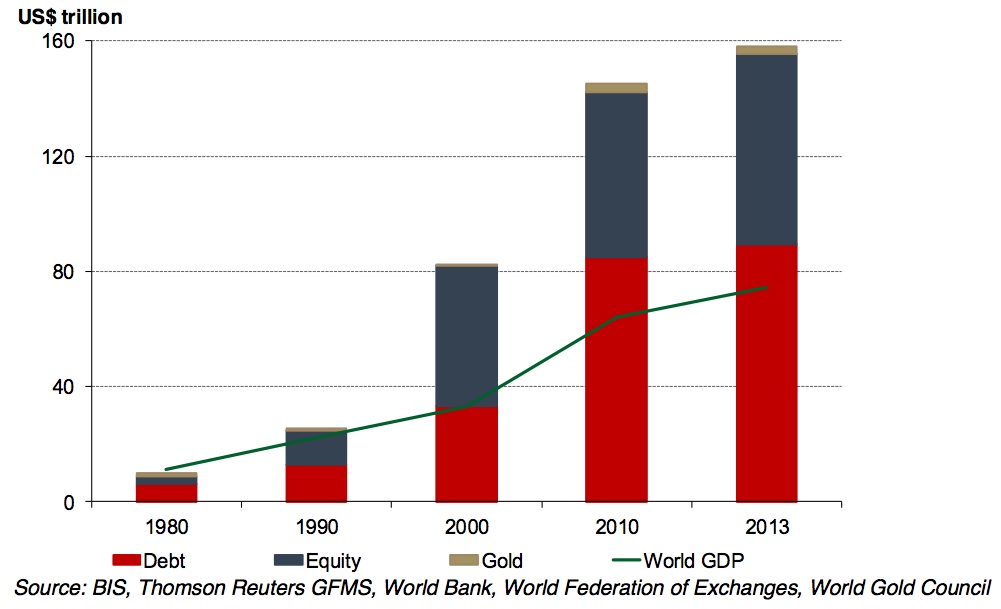 Our outlook for the gold price clearly remains optimistic. The ongoing consolidation that began in the late summer of 2011 with the all-time high is important for the bull market's health. The nominal gold price may appear to be still high, but relative to the monetary base it is actually at an all-time low. In our opinion, this is a temporary anomaly, which we regard as an excellent entry opportunity. We have demonstrated that gold remains attractively priced relative to stocks and bonds, but also relative to a number of hard assets. Hence, the gold bubble argument often promoted by pessimists is refuted as well.

For the global economy, the question whether the tug-of-war between the “tectonic plates” of inflation and deflation will be decided in favor of one or the other will be very important. One thing is certain, the pressure that has been built up between them is becoming ever stronger. It is in our opinion by no means certain that inflationary forces will prevail. However, the socio-economic incentive structures and all-encompassing high indebtedness clearly suggest that in case of doubt, higher inflation rates will be tolerated. The political calculation is simple: there are few creditors and many debtors. True reform is politically unpalatable, as “austerity” is certain to lose elections. Inevitably, politicians will choose inflation.

From a technical perspective, our assumption is that the gold price is near the end of its long consolidation period. The clearly positive CoT data, negative sentiment and not least the recent revival in gold mining shares all point in the same direction.

In the long-term, we expect that a parabolic trend acceleration phase still lies ahead. In the course of this event, our long-term target of USD 2,300 should be reached at the end of the cycle. ***ALSO JUST RELEASED – The Most Terrifying Surprise Of 2015 CLICK HERE.