As we head into what promises to be an action-packed non-farm payroll release tomorrow, the war in the silver market rages, plus a look at gold.

Silver Update
By Michael Oliver, MSA (Momentum Structural Analysis)
July 6 (King World News) – Price just nipped out the prior low of May; momentum did not. Silver is now into the third wave of decline since intermediate momentum peaked in February. When silver closes a week credibly back above its 10-wk. avg./ zero line, we would then assume that the intermediate decline is over, and that upside is the new direction. 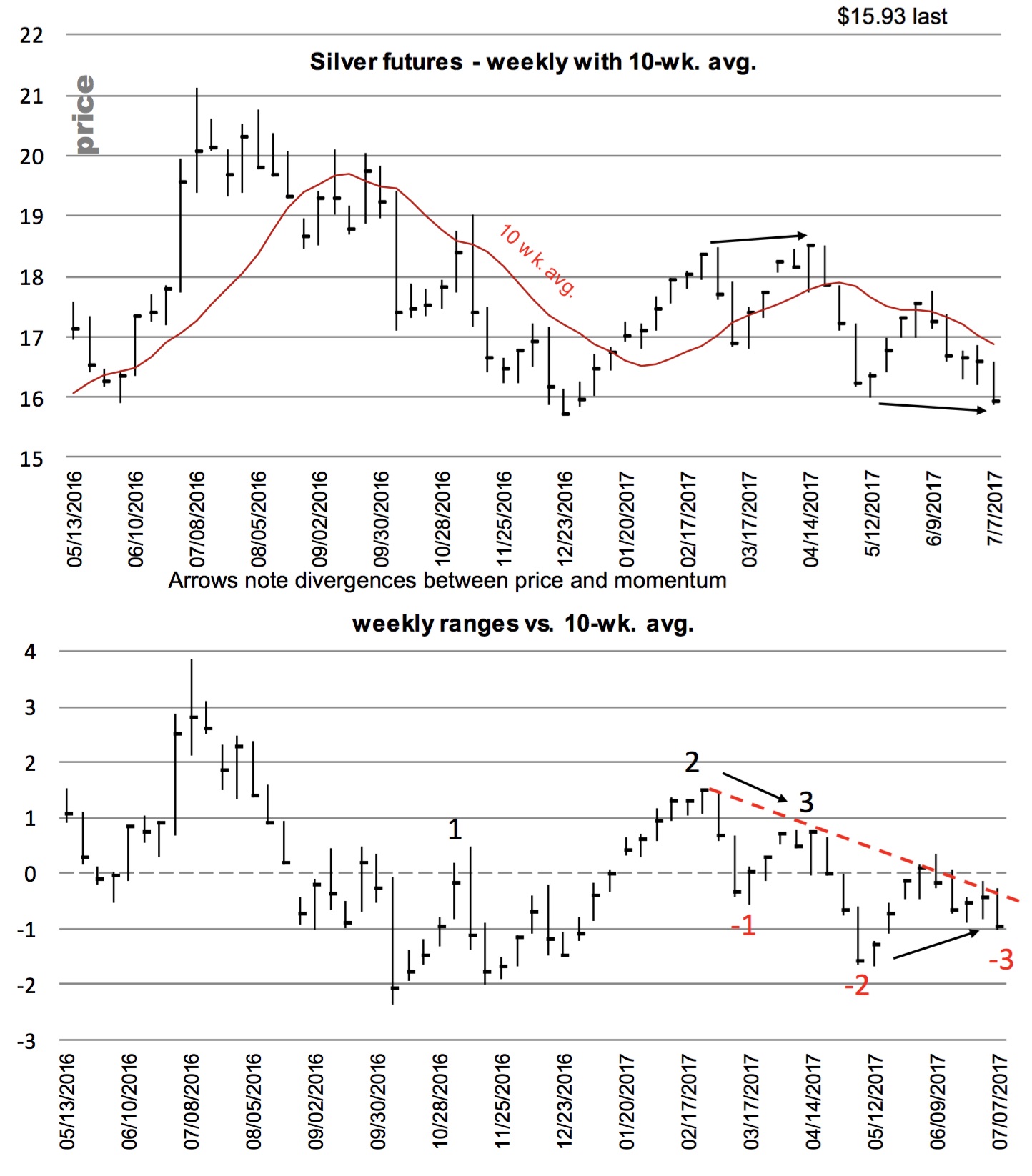 For the week of 7/14, the zero line is estimated to drop to $16.76; 7/21, $16.72. Also, closing over the zero line amply takes out the three-point downtrend structure that’s plotted through peak weekly oscillator closes going back to February.

Note as well that the last time the price chart took out a prior rally high was in April (taking out the February price high). Momentum did not then con rm the price action, and was also in a third wave (three usually being all you get). That’s a potent combination.

The reverse of that situation may now be shaping up: there are three waves of momentum decline, thus exhibiting maturity, coupled with what is so far a non-confirmation…

Gold
Gold has been locked in a large coiling action since it peaked last summer. After more than a thirty- percent surge in the first half of 2016, gold corrected sharply to a December 2016 low. That pullback landed precisely on annual momentum support. Since then gold has rebounded sharply once again and then entered a coiling process. About every other month in 2017, gold bulls feel great, and then feel horrible, back and forth. We regard this swinging price action as the normal price chart confusion that often follows an initial long-term trend shift breakout (which for gold and gold miners was in February 2016 at much lower levels than current).

Recall when this report declared a major top completed in gold in January of 2012, when gold was in the mid-$1600s. The initial consequence within several months was a sharp further drop into the lower $1500s; then came a sharp rally and an effort to regain the upside, including moves back into the upper $1700s. All rallies were futile, however impressive, because annual momentum trend structure was shattered and acted as resistance to the rallies. Nevertheless, the 2012 rallies clouded the price chart picture, keeping the trend debate alive between bulls and bears. Our expectation was at least a drop to the $1200 area, probably in 2012, but we didn’t get that until the summer 2013 gold crash (from the $1600s to below $1200 in three months). Delayed, but not denied.

Following its crash, gold still required a couple more years of dribbling downside action to finally build itself an annual momentum base and generate the momentum upside breakout in early 2016. Since that first major surge ended last July, what we’ve been witnessing is reverse but similar to the action from January 2012 to late 2012—wide swinging confusion. But now with an annual directional context that says more upside is likely after the coiling.

We’ve recently issued a few reports on the intermediate and near-term gold situation, and the resolution of those technicals should re-ignite the upside.

***KWN has released the remarkable bonus audio interview with legend Art Cashin and you can listen to it by CLICKING HERE OR BELOW.