With most of the financial world focused on the Fed Meeting, this is what is really happening and it isn’t good.

Attention All “V” People
June 9 (King World News) – Jeff Snider at Alhambra Partners:  Around the same time Lehman Brothers and AIG became headline news in the middle of September 2008, none of the mainstream econometric models thought it was possible for the US economy to suffer so severe a shock that it would induce monetary policymakers to unleash ZIRP. Worse, the models all predicted that it would be impossible for anything to force the Fed down to zero and keep the central bank there for two years.

The zero lower bound (ZLB) is a constant bogeyman for Economists, denoting not just difficulties nominal interest rate measures have surmounting it but more so the level of economic damage (and the implied dereliction of duty) it would take for this to happen.

While Ben Bernanke was crafting the narrative of his heroism and courage, hardly anyone dared to ask why he hadn’t seen GFC1 coming. The very notion of a global monetary panic had been heartily dismissed, especially with this particular guy at the helm (who had made his academic reputation as some kind of Great Depression scholar; obviously not the right kind). Even after the crisis began showing signs, he most famously ignored them telling everyone subprime was contained.

In the (very) few cases when someone did openly wonder, his dissembling answer would always depend mostly upon the vague notion of “complexity.” I’ll supply one such example here gleaned from an interview then-Chairman Bernanke gave just two weeks before being forced down to the zero lower bound in December 2008:

I and others were mistaken early on in saying that the subprime crisis would be contained. The causal relationship between the housing problem and the broad financial system was very complex and difficult to predict.

But, damn it, that was your job! Not playing around with fancy equations on a blackboard.

He like every other Economist had fallen into a trap, one they had all set for themselves through econometrics. As Ronald Coase had warned whilst accepting his Nobel Prize, these academics only speak gibberish because they long ago gave up on trying to understand the real economy in pursuit of quantifying unicorns and windmills.

As a result, if the models tell the Federal Reserve’s bulging ranks of Economists there’s no danger, who is Ben Bernanke to think otherwise for himself? Groupthink given the gloss of objectivity by “science”; really GIGO.

By 2011, obviously, even the capital “E” Economists had been struck flatly upon their heads by a very different reality. Not only ZLB, but ZLB at two years and counting. The impossible had happened becoming even more impossible-r by the quarter…

Trying to figure out what had been missed, several of the Federal Reserve’s researchers wrote a paper that instead perfectly demonstrates the absurdity of the entire discipline. The models, to put it bluntly, didn’t model reality.

Rather than figure out the inherent flaws in that thinking as well as the monetary system behind everything, they all assumed the breakdown in it as nothing more likely than a small random error. We all paid the price for that one.

More than anything, though, Economists should have been aware that we live in a dynamic world (duh!) Yet, most models incorporate only static assumptions that are rarely revisited, and as a result they almost always overstate the upside compared to any departures downward.

[R]elying on model stochastic simulations that assume constant parameters and variances, and so abstract from data and parameter uncertainty, contributes to an underestimate of the probability of encountering the ZLB. Our results indicate that time-varying parameters, measurement error, and parameter uncertainty can noticeably raise the estimated probability of hitting the zero lower bound, indicating that future research should incorporate these factors in the analysis.

But it wasn’t just underestimating the probability of reaching the ZLB, though. As the authors also conclude, the major error was in how the US economy stayed in that weak state for far longer than anyone had thought, and calculated, possible.

What has been a surprise is the magnitude and duration of the constraint imposed by the ZLB in the United States and in some other countries.

You aren’t supposed to be forced down to zero and get stuck there. Japan was judged to be the outlier, not the base case…

This was, essentially, what former Fed Vice Chairman Stan Fischer had apologized for (but only to a foreign audience) in 2014.

Year after year we have had to explain from mid-year on why the global growth rate has been lower than predicted as little as two quarters back. Indeed, research done by my colleagues at the Federal Reserve comparing previous cases of severe recessions suggests that, even conditional on the depth and duration of the Great Recession and its association with a banking and financial crisis, the recoveries in the advanced economies have been well below average.

Lest you think that having recognized their error the models must have been corrected for it, I only ask that you think back to late 2018. Using the same statistical constructions, Jay Powell had been…under-optimistic?

Not remotely. Despite the distinct lack of evidence for any inflation, including that scenario being outright rejected in the bond market as far back as 2017, all the mainstream models (and Jay Powell’s mouth) kept predicting accelerating growth and recovery. Paging Stan Fischer, over-optimistic still by default.

The reason for reviewing this tortured recent history of econometrics will be obvious when you see what comes next.

And that is, more estimates being made for what comes next. We’ve survived the non-economic shutdown, halleluiah! Except, only now is it time to begin surveying the damage especially as survivor’s euphoria fades. The rampant “V” narrative in the mainstream and trading on Wall Street is derived from the belief there won’t be any damage beyond the extreme short run – and that’s already past tense.

Except, case after case now the modeled projections are appearing all eerily the same way. I showed you last week what it’s expected to look like in Europe, and before that the CBO’s figures as they relate to the US labor market. They are only outwardly “V”-like, in truth devastatingly bad.

All of them: massive shrinking this year and only a partial comeback being extended well beyond the visible horizon. 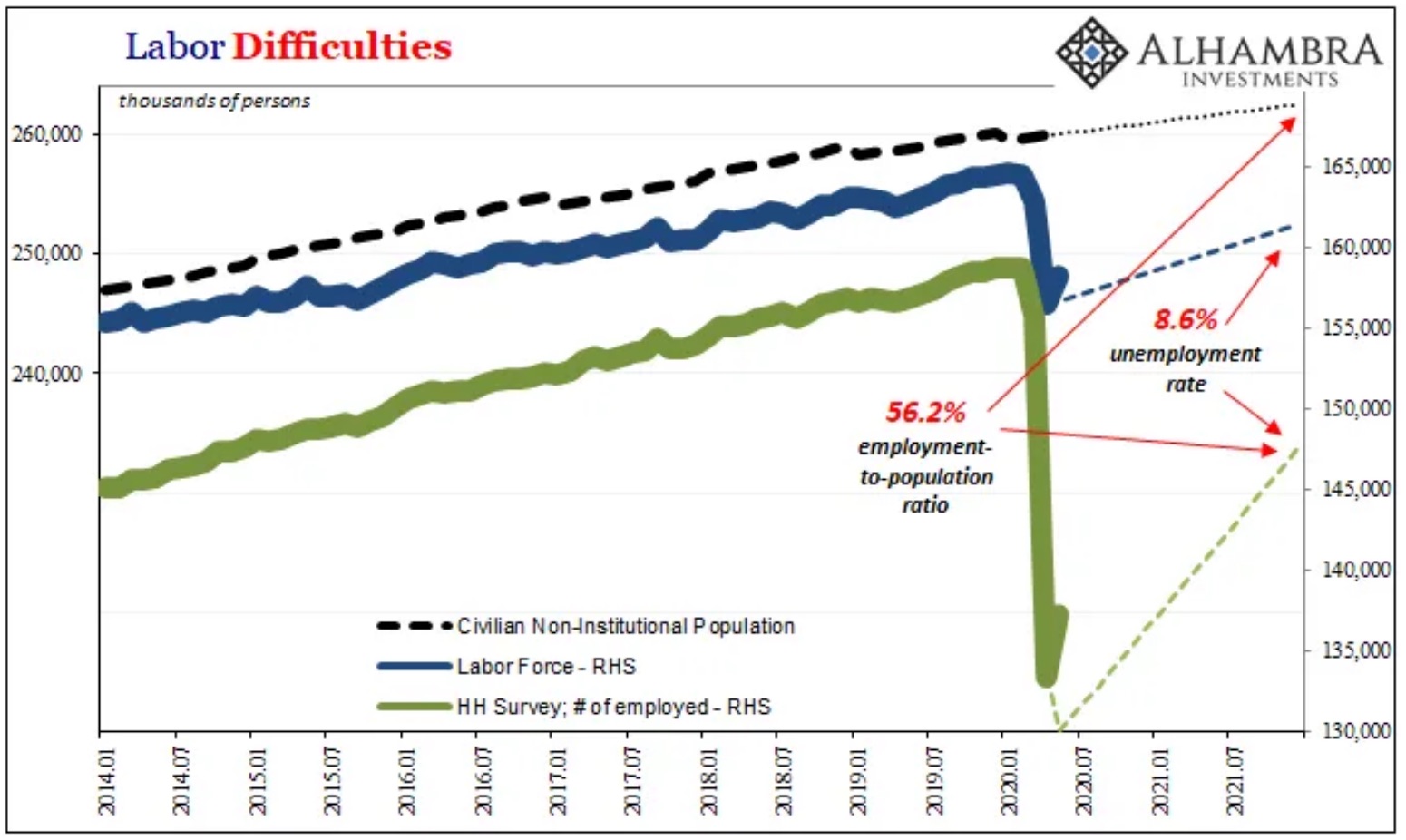 Another set of mainstream projections has been tabulated and supplied by the National Association for Business Economics (NABE). According to its latest panel views, real GDP is anticipated to rebound sharply in Q3 and Q4 surprising no one (except, apparently, everyone who is already an optimistic “V” person).

In fact, their projected number for next quarter is nearly double digits, and what would amount to the biggest positive since 1978. And then next year, 2021, the economy would grow at 3.6% for the year, which would be almost double the best year posted since Ben Bernanke’s massive screw up.

We are entering the window of gigantic positives – all of them leaving us instead with an enormous economic disaster on our hands. 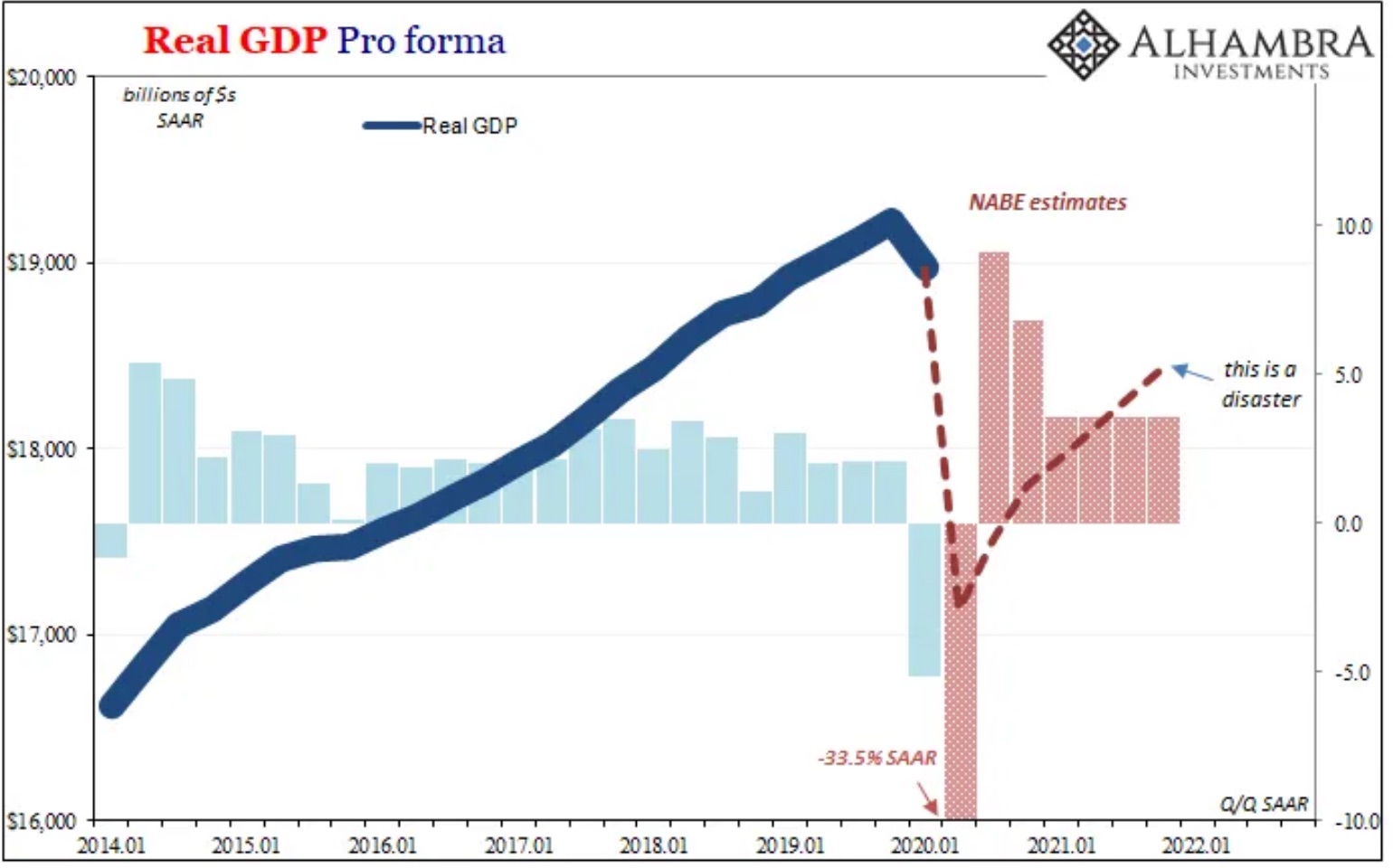 You can see what I mean when I write that all the projections are starting to look the same. It’s as if Economists and their faulty models understand reality in a way that doesn’t penetrate the NYSE’s closed corridors.

Not one “V” person is expecting this sort of “V.” Not one.

And yet, all of these projections are being put together by the mainstream econometric models, those which we know for a fact are…overly pessimistic? No. They are, time and again, proved to be wildly over-optimistic.

As I’ve written too many times lately, the best case is downright atrocious. 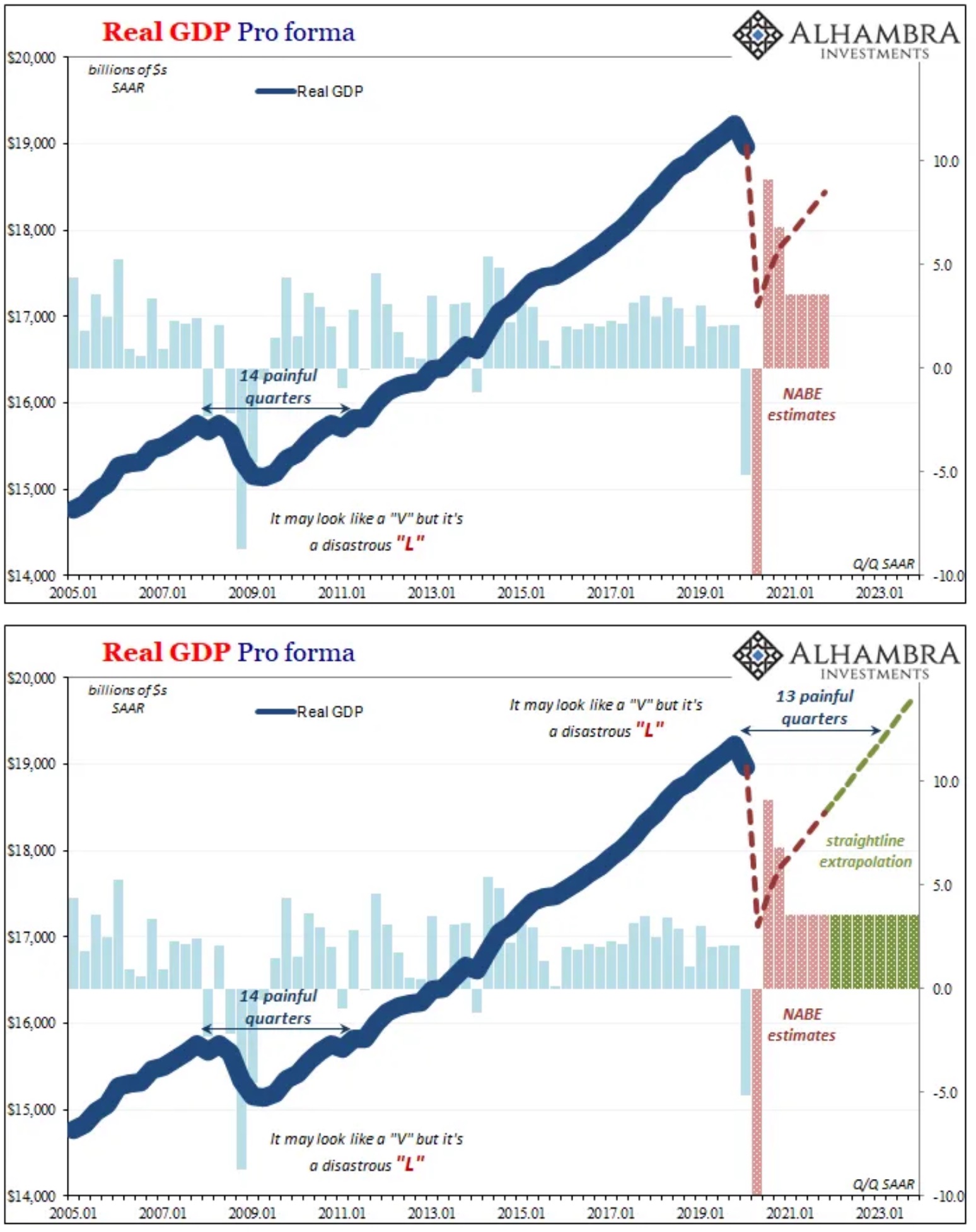 How bad is it? If we extrapolate the NABE’s estimates out further into the future, we get real GDP back to even 13 quarters after it had reached its prior peak in Q4 2019. That’s nearly the same length of time as the Great “Recession” and its false recovery, the very same one which had confounded the optimistic projections the last time we did this.

What that ultimately means is even more profound, even though it’s already ridiculously profound starting here. What I mean is, because we keep seeing this best case and because it is so bad that can only mean the risks to it are entirely on the downside. And I don’t just mean model risks or the high probability the economy will fail to live up to these optimistic assessments. 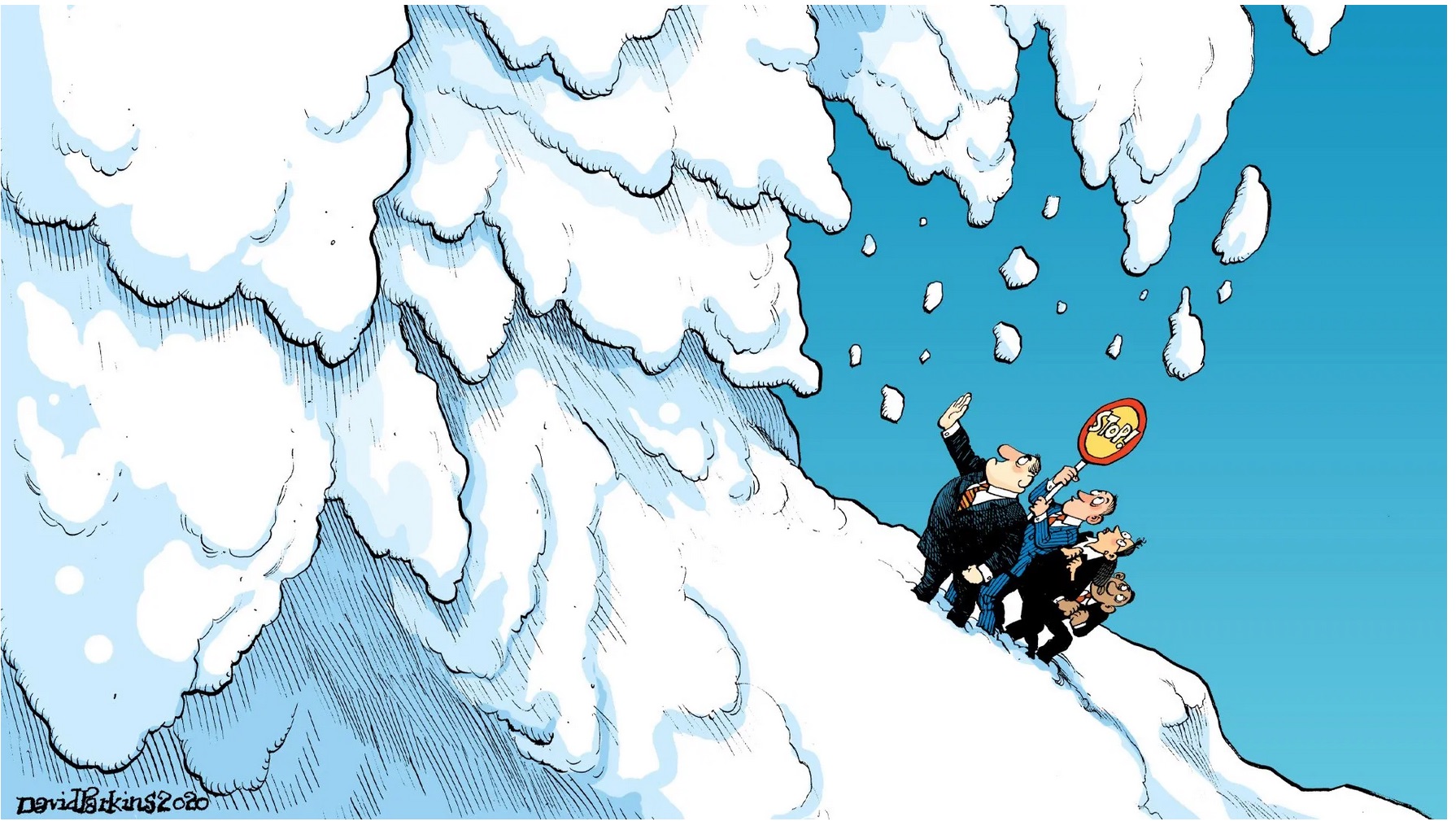 No, far more important: what happens when this disaster begins to dawn on everyone right now expecting way, way beyond the best case? Those who are being led to believe this is all one big nothing, sporting no lingering after-effects. The risks of another leg in GFC2 are much, much higher because even hitting these forecasts would leave such a massive scar, a gigantic economic hole that won’t be papered over by Jay Powell’s newfound penchant for lying.

The only thing seeing this same scenario being spit out of model after model does is how it explains exactly why the guy would lie his ass off on 60 Minutes. When the most optimistic case is substantially worse than the Great “Recession”… 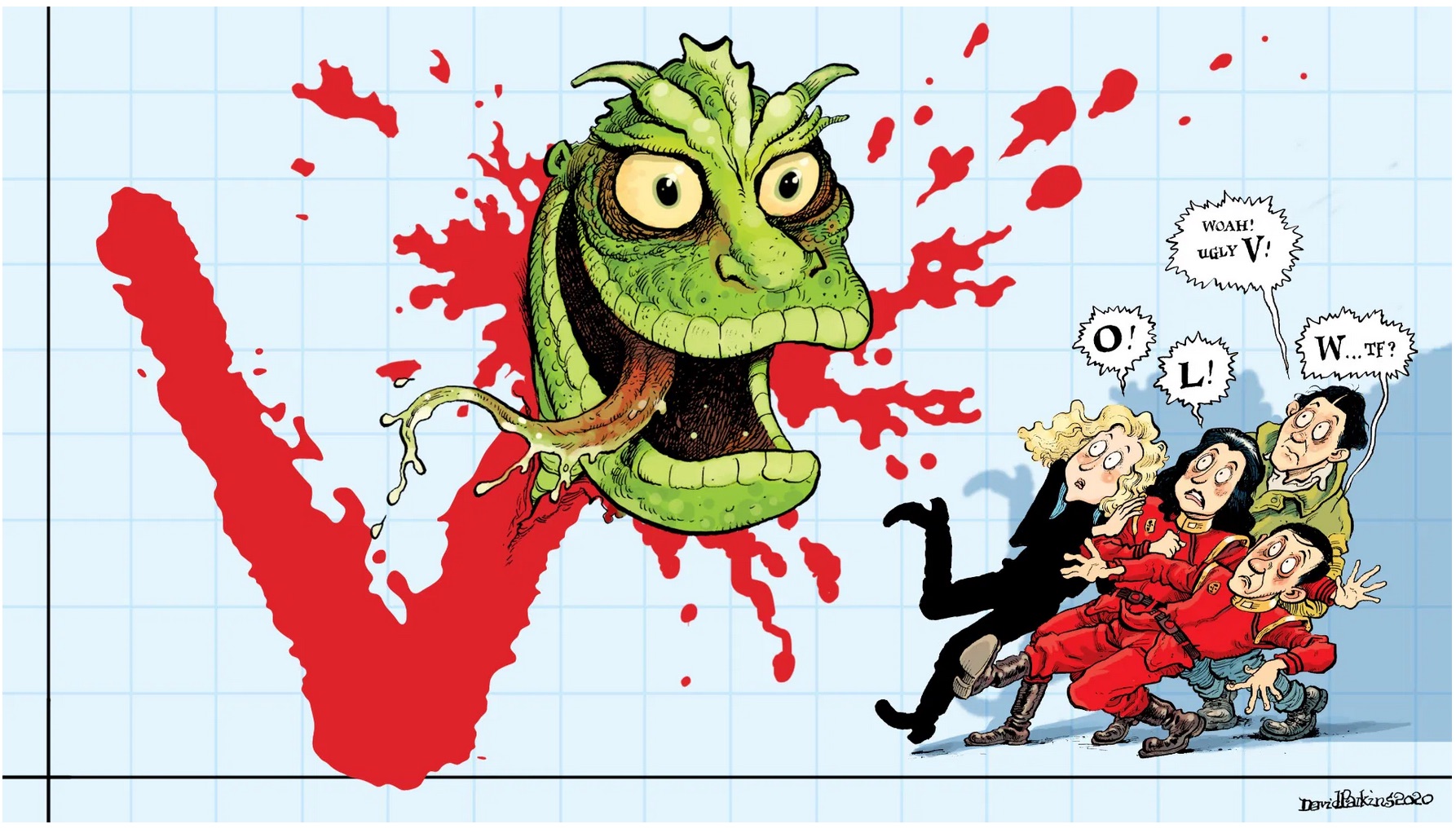 US Dollar & Gold And Plus Manic Trading
***Also Released: Silver, Gold And Gold Bulls, Plus Fed Balance Sheet Heading To $10 Trillion With No Endgame CLICK HERE.