On the heels of another wild week, today the man who has become legendary for his predictions on QE, historic moves in currencies, and major global events, spoke with King World News about how devastating the coming worldwide financial destruction will be.

World Will See Devastating Global Financial Destruction
Egon von Greyerz:  “Very few people realize the enormous wealth transfer that will take place in the next 5 years. Most will lose 75-90% of their wealth and some 100%. What is interesting is that investors needn’t lose most of their money if they took a few measures to protect their fortune. I often speak to Family Offices who built fortunes from the $100s of million to many billions. Without exception, they believe that it is there skill in building a business or investing that has created these fortunes. It clearly requires a lot of skill and a bit of luck to build a sizable fortune. But the magnitude of wealth today is not due to investment skills but the enormous creation of credit and money printing that the world has experienced since the creation of the Fed in 1913. This has created a global growth in asset values of unparalleled proportions…

Egon von Greyerz continues:  “Stocks have been a massive beneficiary of the biggest monetary expansion that the world has ever experienced. If we look at the Dow since the last major economic cycle started in the early 1980s, we find the most remarkable rise. In early 1980, the Dow was at 850 and today we are 18,870. That is a rise of 18,000 Dow points in 36 years. This means that the Dow has gone up by 9% per year on average since 1981. A 9% annual increase means that the index doubles every 8 years. What a great investment. You buy stocks in 1980 for $10,000 and today in 2016 you have $220,000 without having to lift a finger. On top of that there has been a dividend yield of around 2% on average. But this growth in the stock market has not just happened on its own accord. Stocks don’t grow at 9% annually for 36 years without some rocket fuel. And the explanation is very simple. Debt has provided the fuel. Because US debt has also grown by 9% annually since 1981. So the recipe for becoming a successful and loved president is just to print and borrow money. There is an absolute correlation between the increase in US debt and the growth in the stock market. 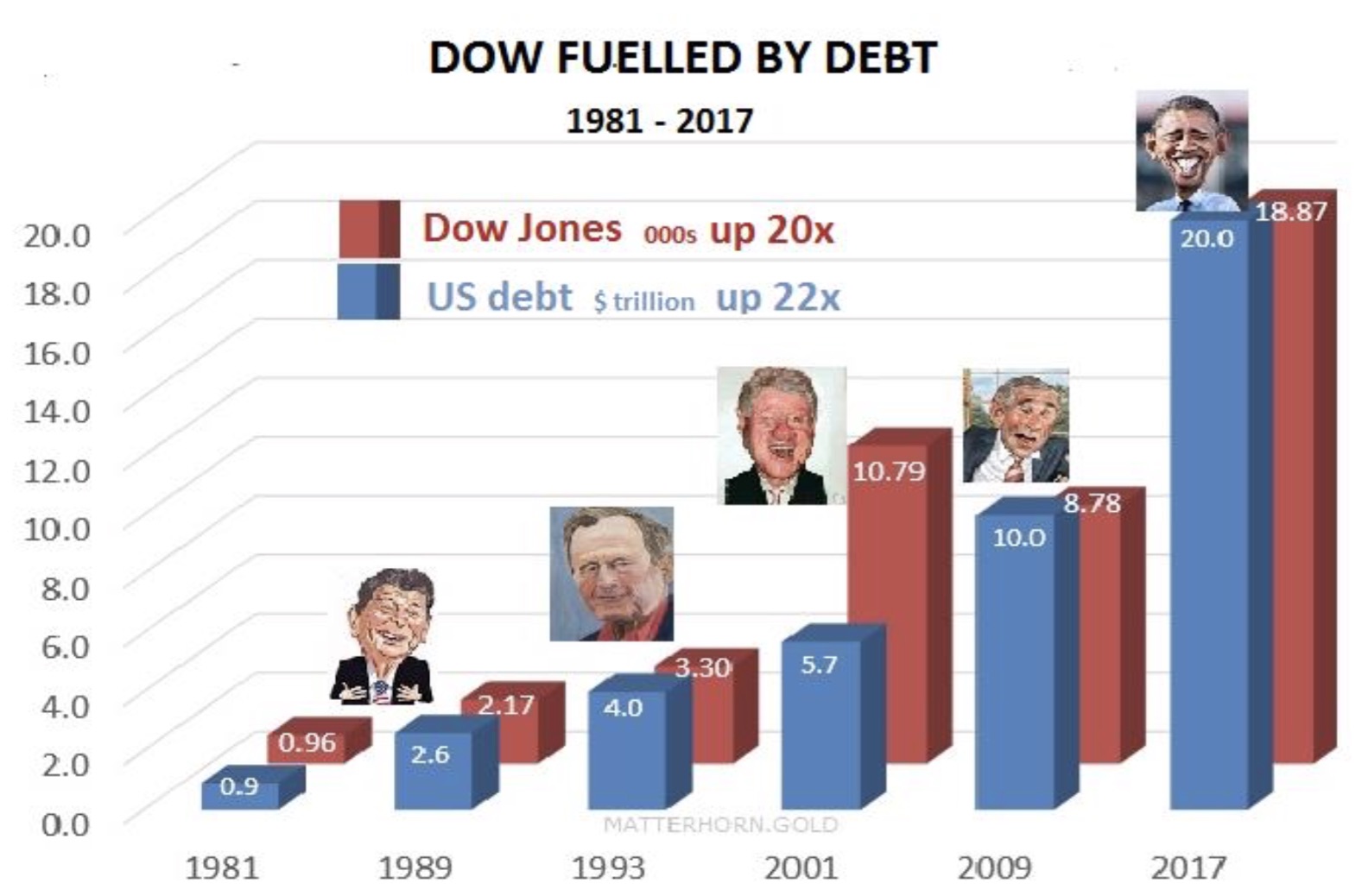 Reagan knew the secret. During his reign, he tripled debt from $900 billion to $2.6 trillion, leading to a tripling of the Dow from 900 to 2,700. And so it continued. Clinton didn’t have to print as much money to get the market up but Bush Jr. had to almost double debt and still the market ended lower than when he took over eight years earlier. Obama doubled both debt and the Dow in line with the longer trend.

The problem for Trump is that we are now at the point of diminishing returns and this started with George W already. When Bush Jr. took over, the Dow was 10,800 and now it is 18,800, a 74% increase. But to achieve that 74% rise in the Dow, debt had to go up by 250%. This means that Trump will have to print an awful lot of money to keep the stock market going up. Bearing in mind that the Dow is at record levels with P/E at over 20 and corporate profits falling, this is going to be virtually impossible to achieve. The chances for Trump to be re-elected after four years are very slim due to the present high level of the stock market together with record debt. Much better to become president with a weak economy and weak market like Reagan did.

In 1929 the Dow peaked at 400 and then collapsed to 40 in 1932. This 90% fall occurred at a point when economic conditions in the US and globally were a lot more benign then they are today. Since 1981 the Dow has gone up 22x. With the world experiencing a historical asset and credit bubble of unprecedented proportions, an implosion of debt could easily see the Dow down 90% like in 1929-32, or probably even 95% to get back to the 850 level where this bull market started. This would mean a fall of 95% in real terms. I say real terms because it is not unlikely that we will see the biggest money printing experiment in history with central banks worldwide printing trillions or even quadrillions of dollars in a futile attempt to save the financial system and the world economy. This massive money printing could lead to the Dow reaching much higher levels in nominal or hyperinflationary terms.

The best way to measure the Dow in real terms is against gold. Gold is the only money which has survived in the last 5,000 years and gold represents stable purchasing power. Over time gold doesn’t go up. Instead it is paper or fiat money that goes down until it reaches zero.

The Dow/Gold ratio peaked in 1999 and is now in a downtrend. Once the current correction is finished the ratio will continue down towards the 1:1 level like in 1980 when the Dow was 850 and Gold was $850. The only question is at what level the Dow and gold will be when they reach the 1:1 ratio. Will it be Dow 10,000 and Gold $10,000? Or will we see hyperinflationary levels of 100,000 Dow and $100,000 gold? The absolute level is really irrelevant. Because at whatever level they meet it will involve a catastrophic loss of real capital for a stock market investor. 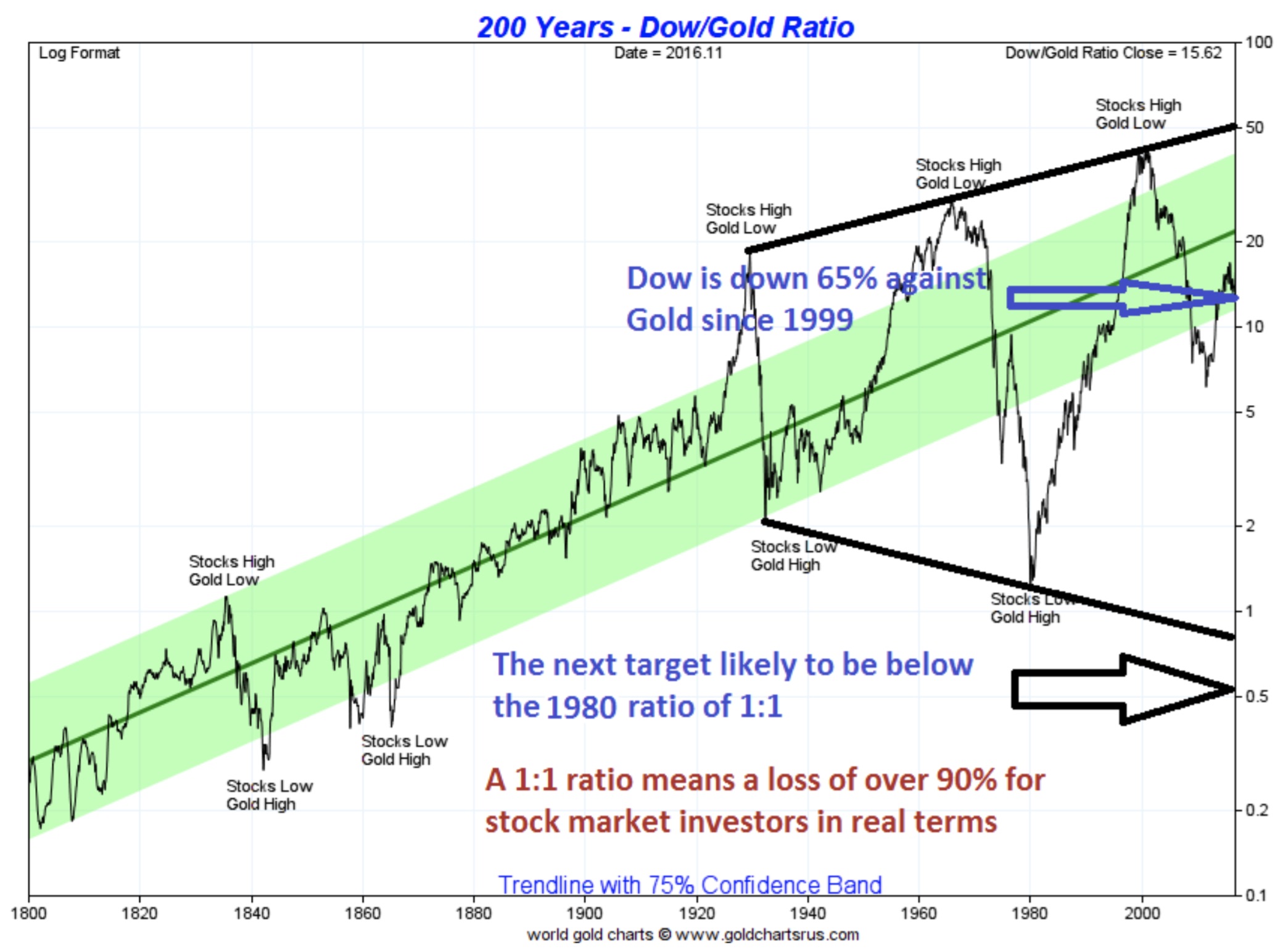 Finally, the property market has also been fueled by the credit explosion. I meet many wealthy investors who believe that property is the best form of wealth preservation. It is of course true that property has been a fantastic investment for the last 100 years. For hundreds of years before 1913, inflation remained stable at 1-2% per year. It was the same with property values. A house in the early 1700s did not move much in price for 200 years until the early 1900s. But the creation of the Fed lead to credit growth and money printing of exponential proportions in most of the Western world. And this is why property prices have moved up 1,000s of percent in the last 100 years. But to believe that property now represents real value after the biggest rise in history is very dangerous. In the last few years this bubble has additionally been fueled by virtually free money with interest rates at zero or even negative.

In gold terms US homes peaked in the early 1970s. The fall of an average US home against gold has been 87% since then. It could seem that US housing will not fall much further from these levels. But when we look at the high level of lending in this market combined with low interest rates, it is likely that housing in the Western world will decline substantially from here. A minimum target is the 1980 level which would involve a 50% fall in real terms which is against gold. But bearing in mind the bubble nature of this market, it is more likely that we will see a 75-90% fall from here which means down to at least 10 on the index in the chart below. 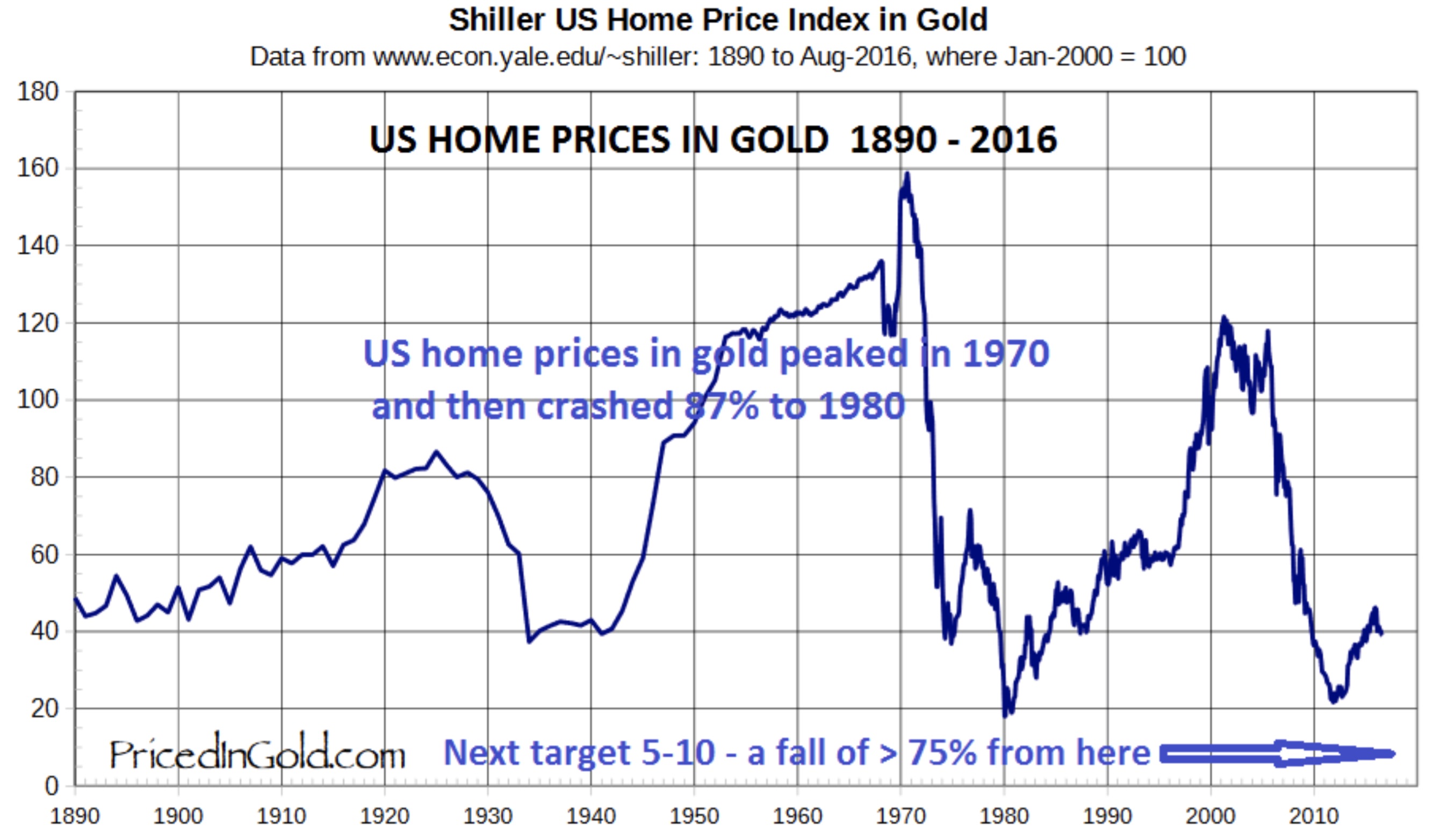 The fall in asset prices and the consequent increase in the value of gold could happen in the next five years. If that will be the case, investors in stocks and property will lose 75-95% of their assets in real terms. This should not be seen as sensational levels but only a healthy correction after the biggest asset and debt bubbles in history. Yes, it will involve misery and a major adjustment for most people. But this is a necessary adaptation for the world to start growing again without excessive debt. Because with debts of $250 trillion and derivatives in the quadrillions, there is no chance for the world economy to advance. All this debt must implode together with the assets that it has backed.

Gold will clearly offer protection against the coming wealth destruction. But it must be physical, held outside the financial system and outside the country of residence of the investor. Gold must also be kept in a politically safe country with a gold ethos.

The current correction in the gold price should be totally ignored. It is due to manipulation and a dollar which is temporarily strong. It is critical to be covered against the risks that I have outlined above and gold is the most important protection that anyone can own. People who don’t own gold are exposed to monumental financial and human risks.”

***ALSO JUST RELEASED:  Radical Changes Are In Store For The World And Global Markets, Are You Ready? CLCK HERE.