China’s Banks Insolvent: Big Problem For Global Financial System
July 11 (King World News) – Kyle Bass:  Bank runs are happening all over China. It’s important to note that the Chinese banking system represents 350% of Chinese GDP (on balance sheet) while the U.S. system is only 100%. One of the largest lending categories of Chinese banks is real estate…Chinese property developers are filing bankruptcies at a record pace.

Moody’s has DOWNGRADED 91 Chinese property developers this year alone…while Moody’s had only downgraded 54 OVER THE PAST DECADE before this year’s actions. China’s banks are insolvent. The CPC is likely to brutally suppress the bank runs in the near term as they can’t allow them to spread further. It’s not just small banks, the biggest crowd over the weekend was found at The Bank of China (one of the largest SOE banks)…

Uncle Sam Showing Strength
King World News note:  US dollar continues its massive breakout with an upside target on the US Dollar Index of 120.

US DOLLAR INDEX CONTINUES TO SURPRISE:
Next Target For US Dollar Index After
Major Upside Breakout Is 120!
(Now Trading Above 108) 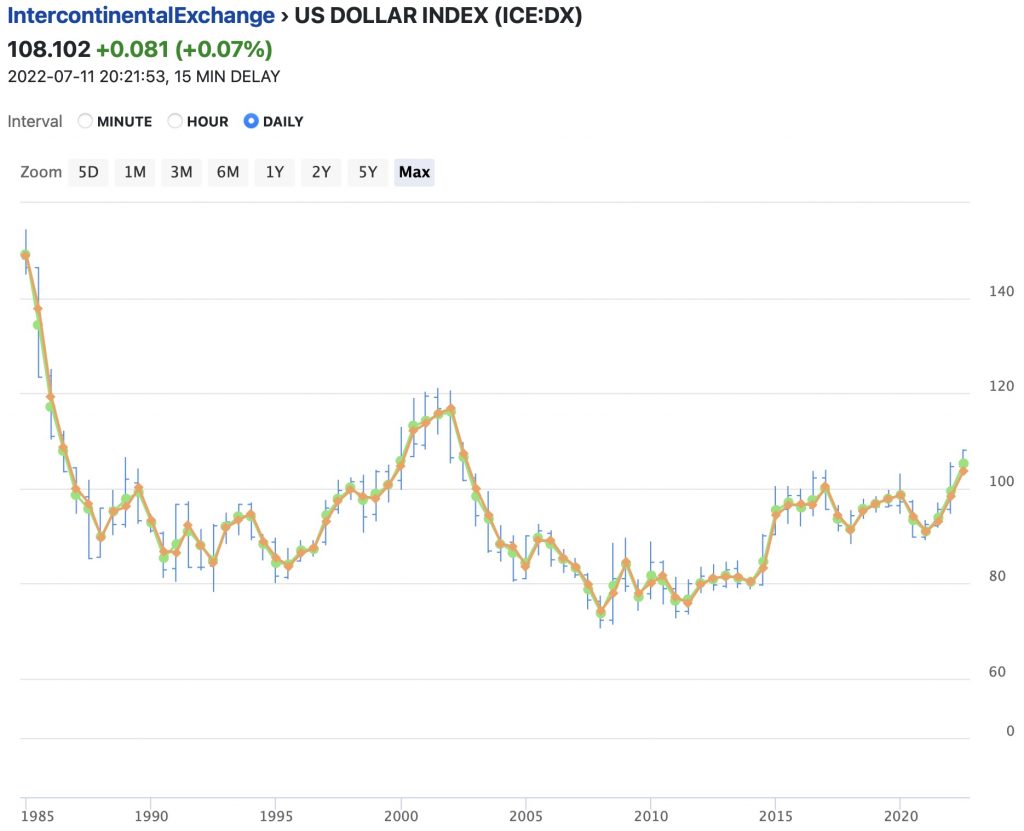 Time For Trapped Fed To Pivot?
Otavio Costa:  In the last 30+ years: Every time the yield curve inverted, the Fed was forced to end its tightening cycle. Here we are again today. 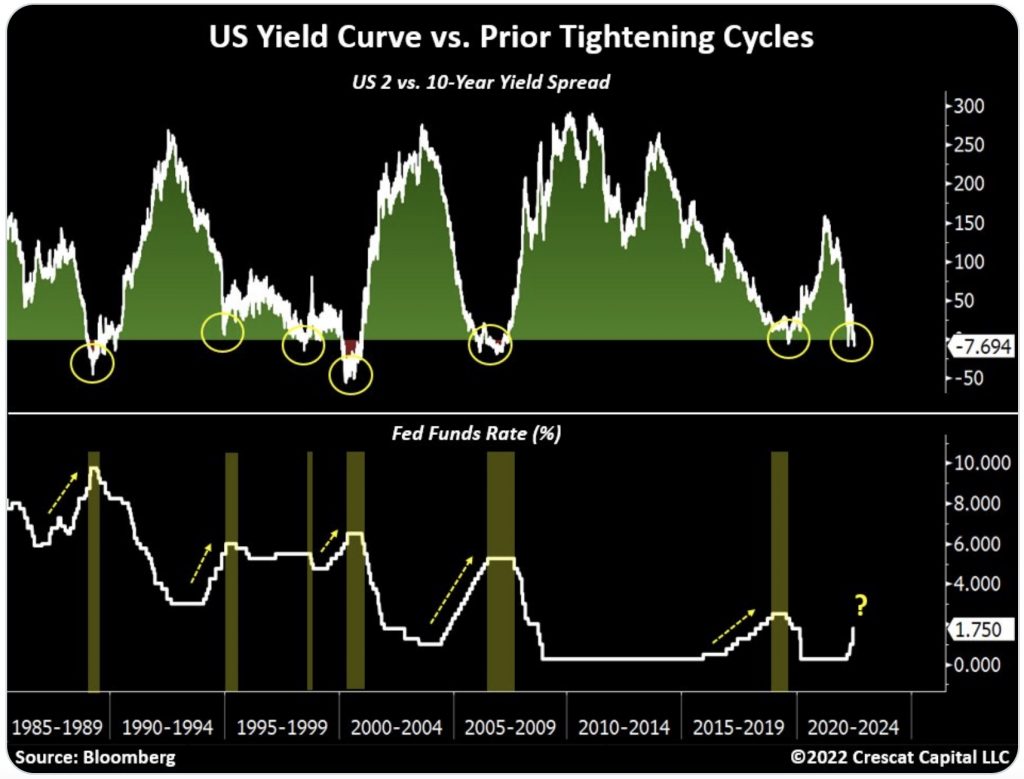 Serious Problems For US Consumers
Walter Bloomberg:  MORE THAN HALF OF U.S. CONSUMERS SAY THEIR HOUSEHOLD FINANCIAL SITUATION DETERIORATED FROM A YEAR AGO AND NEARLY HALF EXPECT IT TO WORSEN IN THE YEAR AHEAD, BOTH UP FROM MAY – NY FED

Auto Bubble Now Bursting
Peter Boockvar:  In the higher interest rate backdrop that is here after years of easy money, it will continue to be revealed where the excesses took place. In a place that maybe you weren’t looking but should have been apparent, Barron’s over the weekend had an important article written by Lisa Beilfuss titled “Car Repos Are Exploding. That’s a Bad Omen” and with a contribution from Danielle Dimartino Booth, the CEO of Quill Intelligence.

“Lucky Lopez is a car dealer who has been in the business for about 20 years. In recent meetings with bankers, where he bids on repossessed vehicles before they go to auction, he has noticed some common characteristics of the defaulted loans. Most of the loans on recently repossessed cars originated during 2020 and 2021, whereas origination dates are normally scattered because people fall on hard times at different times; loan to value ratios…are around 140%, versus a more normal 80%; and many of the loans were extended to buyers who had temporary pops in income during the pandemic.”

With the help of PPP money, debt forbearance, stimulus checks and extra unemployment benefits, many bought ‘too much’ car at the same time “Banks’ auto lending standards…went out the window, and then lenders jumped on the bandwagon of overpaying for cars”, Lopez says. “Everybody thought the free gravy train would never end,” Lopez says. Lisa went on, “Now, he (Lopez) he says he has never seen so many people making $2,500 a month owning $1,000 a month in car payments. That’s about double the maximum portion of income many financial advisors recommend allocating toward a car payment.” His bottom line, “We had a housing bubble in 2008, and now we have an auto bubble.”

Danielle pointed out that banks are “buying car lots to handle the flood of repossessed, used cars coming to the market.” What’s the banks’ exposure? On those 140% LTV loans they are getting around 70% at auction. There was a total of almost $1.5T auto debt outstanding as of the end of Q1.

US Dollar Surge Continues
This US dollar rally is relentless with the euro just a penny away from parity and the yen at a fresh 24 yr high. Europe is getting some very slight relief today as natural gas prices are pulling back 3.5% after Canada said they will ship that turbine to Russia, the one that Russia used as an excuse to slow down pipeline shipments. The 10 day annual maintenance on Nord Stream1 also begins today and hopefully it will be turned back on day 11. I know the US dollar itself has its own challenges with high debt and large twin deficits, but its peers have certainly their own problems too. Relief on energy prices is what the euro needs and a monetary pivot by Kuroda is what the yen needs in order to rally. The former might happen if Russia keeps supplying gas and ramps up to their contracted levels but the latter is unlikely to happen any time soon.

More Trouble In Japan
Speaking of the Japanese, their 40 yr yield continued higher, which I continue to watch as a measure of what’s really being messaged by their bond market. The yield was up by almost 5 bps to 1.47%, a fresh 6 1/2 yr high.

Madness In China Continues
While the rest of the world has learned a lot about covid and how to live with it, the Chinese continue to think that shutdowns are the same in creating immunity as a shot or from actual getting it. Blame more of this over the weekend for the fall in copper, iron ore and oil today, along with the drop in Macau casino stocks.

China also reported its June loan data where aggregate financing totaled 5.17 Trillion yuan, above the estimate of 4.2 Trillion. Of this, bank loans made up 2.81 Trillion. Until they fully reopen and get off the stop-start, this is like trying to capture water using a sieve. Also out of China over the weekend was their PPI and CPI figures that were both one tenth higher than expected but still lower than the rest of the world because of their challenged economy. The Shanghai comp was down by 1.3% and the H share index in Hong Kong was weaker by 3.1%. 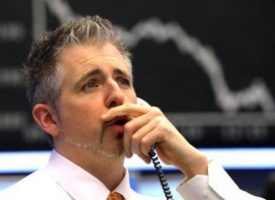