Today the man who has become legendary for his predictions on QE and historic moves in currencies and metals told King World News that few are prepared for the disorder and collapse of currencies.

March 28 (King World News) – Egon von Greyerz at Matterhorn Asset Management (based in Switzerland):  When bubbles burst, we will discover how very few superior men there actually are – as defined by Confucius:

CONFUCIUS
Superior man can exist at many different levels in society, not necessarily linked to money or investments. There will be many people without money who are prepared at an intellectual or psychological level. These people are probably the happiest since sadly many wealthy people worry about their money all the time rather than enjoy it.

In this piece I am talking primarily about preparedness in relation to one’s wealth.

FOCUS ON WEALTH PRESERVATION
The investors we meet in our business are people who are risk averse and therefore very much focus on wealth preservation. These investors buy physical gold because they are concerned about the excessive risks in markets. They want to protect and insure their wealth against unprecedented financial and currency risk. Like ourselves, these investors consider physical precious metals, stored outside a fragile banking system, as the ultimate form of wealth preservation…

But investment gold represents less than 0.5% of world financial assets. This means that a minuscule percentage of investors insure their wealth in gold. This is clearly surprising bearing in mind that over 5,000 years gold is the only money that has survived.

INFLATION IS COMING
There are of course other real assets like land and property that have held their values very well over time. As we expect major inflation in food prices, agricultural land is likely to do well in coming years. As I have pointed out in recent articles, we are already seeing high inflation in agricultural and other commodities. See chart below. 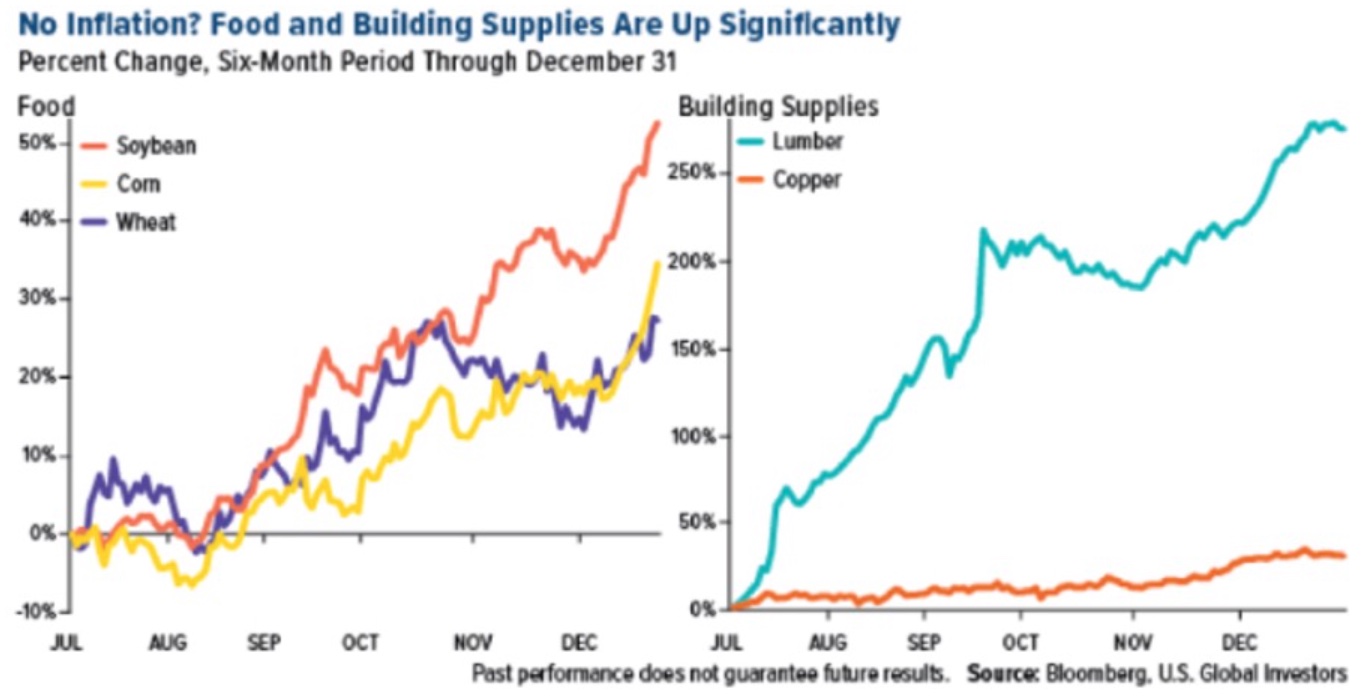 BOND YIELDS DO NOT REFLECT THE MASSIVE RISK
But commercial and residential property is a different matter. The incessant creation of credit since 1971 has driven property prices ever higher. In addition, central banks have given  borrowers the best leg up ever by charging virtually nothing for money.

In Switzerland for example you can get a 15 year fixed mortgage at a fixed rate of 1%. This is like handing out money for free. But low interest rates in no way represent the generosity of governments or central banks. Instead it is the consequence of their profligate spending.

With incessant deficit spending, governments must finance the new debt at virtually no cost to avoid default. That is why we are seeing $18 trillion of negative yielding government bonds with no Western borrower paying above 2% for any maturity.

How absurd rates are is reflected by for example Greek versus US rates for 30 year bonds. Greece just launched a 30 year massively oversubscribed bond issue at 1.95%. For comparison, US 30% year bonds yield 2.36%. Both these borrowers are virtually bankrupt but it is absurd that a very financially weak Greece can borrow at a lower rate than the US.

So the government bond market is biggest bubble of them all. That won’t stop it from expanding further.

Just take the US. When Trump was elected in November 2016, US debt was $20 trillion. Based on history I forecast that it would reach $28t in January 2021 and $40t in 2025. At the time most market observers found this forecast preposterous but sadly they hadn’t studied history which told us what would happen.

US GOVERNMENT DEBT $50 TRILLION IN 2025
Based on the current situation of the US economy and the forecasted deficits and credit expansion, $40 trillion in 2025 is too low and we are now looking at a debt of $50t.

Remember that when Reagan took over in 1981, US debt was under $1t. So 44 years later the debt is forecast at $50t in 2025. And this figure doesn’t include potential  defaults in credit or derivative markets which could increase the $50t exponentially. Total US debt of $84 trillion can never be repaid and nor can it be serviced at non-manipulated market rates.

When bubbles burst, the domino effect is incalculable. In addition to debt default of $10s of trillions, derivative defaults, which are very likely, could add $100 of trillions and more.

I am sure that the Fed and other central banks are already cranking up the printing presses or expanding the memory of their computers to cope with all the additional zeros.

HYPERINFLATION IS A CURRENCY EVENT
There are a number of respected market observers who believe that we will not see high inflation or hyperinflation. In their analysis they conveniently avoid the currency effect.

As I point out regularly, every single event of hyperinflation in history has arisen as a result of the currency collapsing. It is not the increase in demand for goods and services, nor central bank interest rate policy that causes hyperinflation.

No, it is the total mismanagement of the economy and the consequent debasement of the currency that creates hyperinflation.

And if we look at a hyperinflationary economy like Argentina, the Argentinian Pesos has lost 99.99% since 2000. 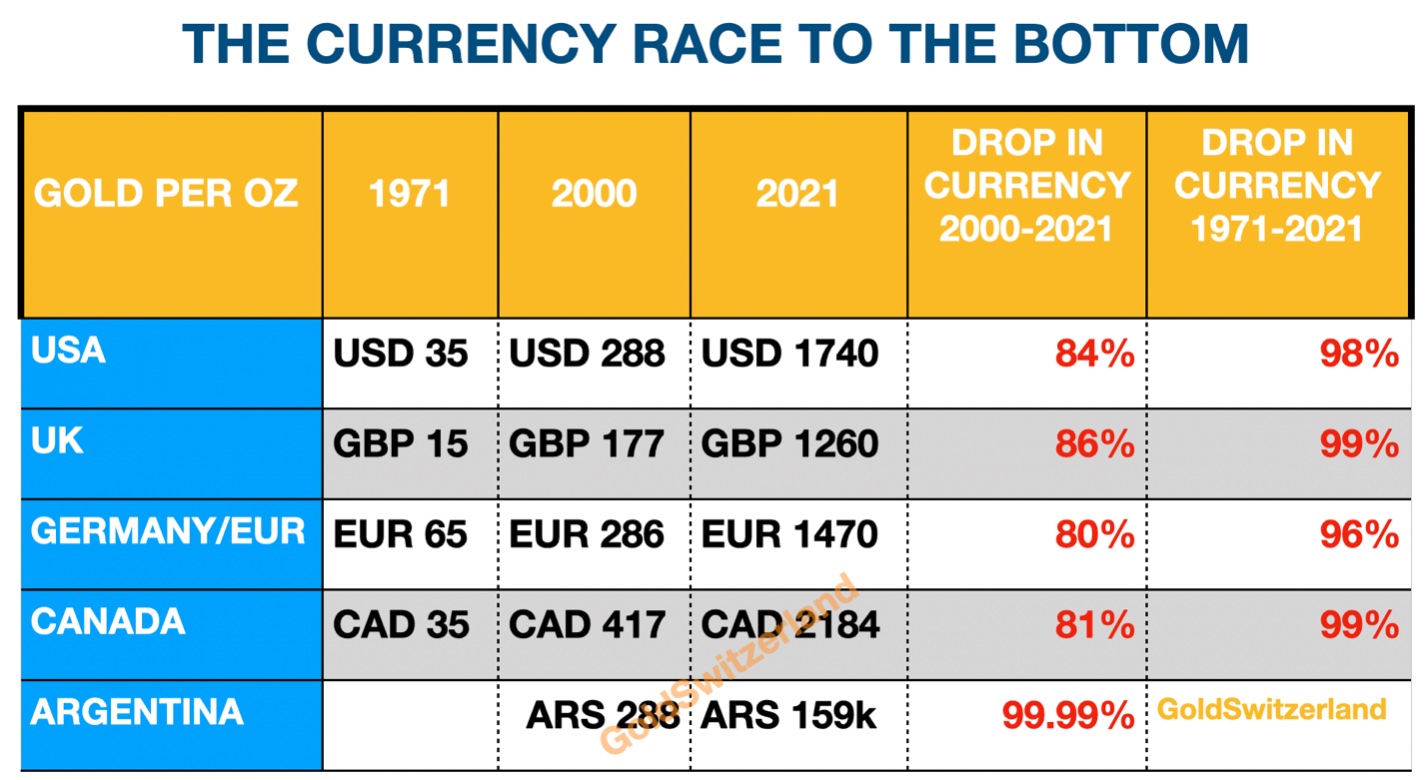 FEW ARE PREPARED FOR DISORDER, RUIN OR HYPERINFLATION
Whether it is ordinary people or the so called experts, everybody believes ruin won’t happen to them. Therefore they are not in a Confucius state of preparedness for the coming economic and currency collapse.

Let me describe a very recent anecdote about hyperinflation in Europe. Last year, in a small town in Ticino, (Italian part of Switzerland) I dined with my wife and friends in a small restaurant. The owner came up to me and said he knew me. It appeared that he followed my articles and interviews. He told us he fled from Yugoslavia in the 1990s. He and his family had lost an important part of their money during the 1992-94 hyperinflation.

The annual level of inflation in Yugoslavia in January 1994 reached 116 billion percent!

Below is a 500 billion Yugoslav Dinar note.

Fortunately the restaurant owner had some savings in gold and this allowed him to start afresh in Switzerland. He told our friends never to keep any money in the bank but to only hold physical gold.

So this former Yugoslav man was prepared for the “possibility of ruin”, as Confucius warned, and told us that he would never trust the banking system again.

My friends who were at the restaurant still don’t hold any gold. They like 99.5% of investors believe that trees grow to heaven together with stocks and property.

Based on the stock market in the last 40 years, most investors could of course not avoid making money.  Therefore very few are in a Confucius state of preparedness and will be totally taken by surprise when the next crash starts.

Initially they will expect central banks to save them again. But when the V recovery doesn’t happen and the market just continues down, most investors will ride the market all the way to the bottom.

The Buffett indicator of market cap to GDP is now giving us a major warning. As the graph below shows stocks are now at an all time high valuation in relation to GDP.

If we look at the Shiller Cape index, it is now at a historical high (excluding the Dot Com bubble) and 2X the historical average. Yes, overbought positions can extend but the subsequent crash will be long and vicious. 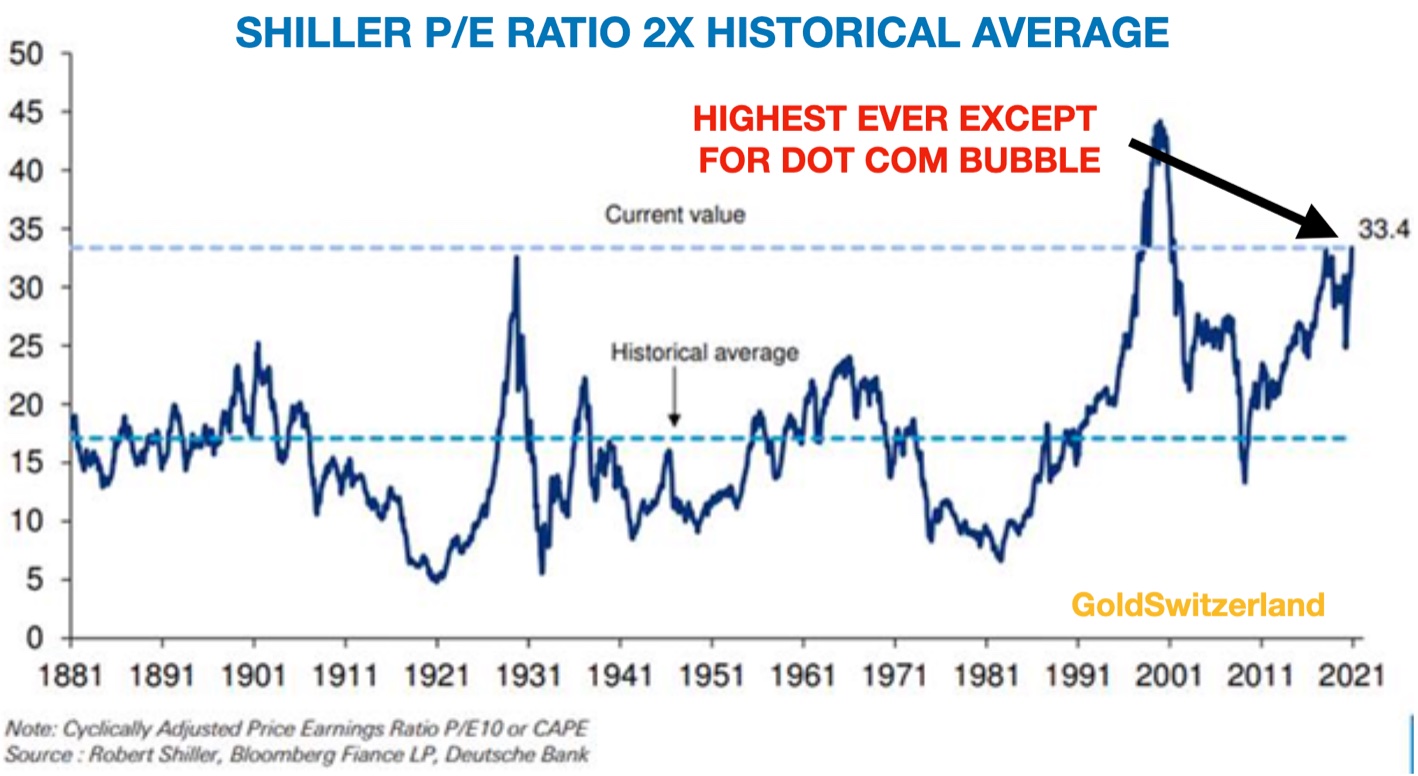 SELL STOCKS AND BUY GOLD – A SEMINAL DECISION
Finally another picture that reminds us of Confucius’ warning that “danger, disorder and ruin may come”.

The Dow peaked against gold in 1999. The ratio came down from 44 to 6 or by 87% in 2011. We have now seen a 10 year correction with the compliment of the Fed and massive money printing combined with credit expansion. 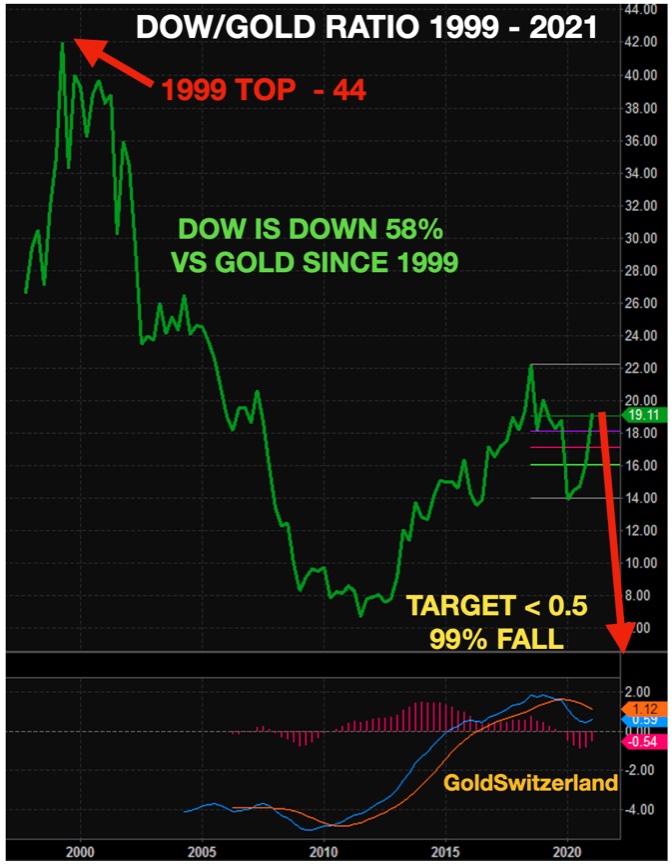 The rise in the Dow could end tomorrow or we could see a continued meltup for a limited period. Regardless, the time for Confucian preparedness is now and here.

We know that stocks are massively overbought on every measure. To catch the last few points of the rise is an extremely dangerous exercise that could lead to ruin.

Now is the time to take profits in stocks and protect your assets from total annihilation.

As I showed in last week’s article, gold is today as cheap in relation to money supply as it was in 1970 at $35 and as cheap as in 2000 when gold was $290. The short term correction in gold is now finishing and the next move up will be the strongest for a few years.

The rise in gold and fall in stocks will mean that the Dow will fall another 99% (see chart above) from here to reach the long term trend line (not shown).

So getting out of stocks and holding physical gold will not only be a seminal decision but it will also heed 2,500 years of wisdom that Confucius taught…This will link you directly to more fantastic articles from Egon von Greyerz CLICK HERE.