A Turn May Finally Be At Hand
James Turk:  “I’d like to begin, Eric, by noting that based on their Comex closing price in New York, spot gold and silver last week rose by a spectacular $29.10 and 49.6 cents, for gains of 2.2% and 2.9% respectively. Jumps of this magnitude over such a short period of time are rare, so these results from last week are important events that deserve our attention…

Importantly, this strong bounce from the lows suggests that a bottom has been made in both precious metals, and that as a consequence the short-term trend is again turning higher.

There are a number of related events that provide additional evidence that we have seen a short-term bottom.

Gold Setup Positive
First, there is the change in Comex open interest. A lot of spec longs have exited and/or moved to the short side. While some of last week’s bounce may have been a result of short covering, the relatively low open interest at present, particularly for gold, indicates that there is a lot of potential buying power on the sidelines.

Then there is the fact that gold closed lower 9-days in a row into the sub-$1,200 low reached earlier this month. But that huge weight of selling pressure could not push gold – or silver for that matter – down to the low price reached this past December.

Then there is the upside follow through we have seen today. It is of course always good news when we see some follow through like this. Even though the price rises today in gold and silver are modest, it is welcome news. After all, we can’t expect to see the big gains like those last week repeated every week.

The Big Picture
So let’s turn our attention to the big picture. The unanswered question is whether this month’s short-term bottom will develop into another important long-term low? And I say ‘another’ purposefully.

Given that the lows made by gold and silver last week are above those made in December 2016, which is also above the December 2015 lows, it is clear that the precious metals are in long-term uptrends. Therefore, any and all reversals to the upside like the one last week should be considered as resumptions of the major long-term uptrend. It is impossible to confirm that the low is in place because no one can predict the future, but we need to give the precious metals the benefit of the doubt.

Of course only time will tell what price gains will be achieved in the long-term. Though the following chart is illustrative just for silver, I think it is important for both both precious metals. While this chart maps the upside potential for silver, which is one of the most undervalued assets on the planet, it also sends a positive signal for gold. 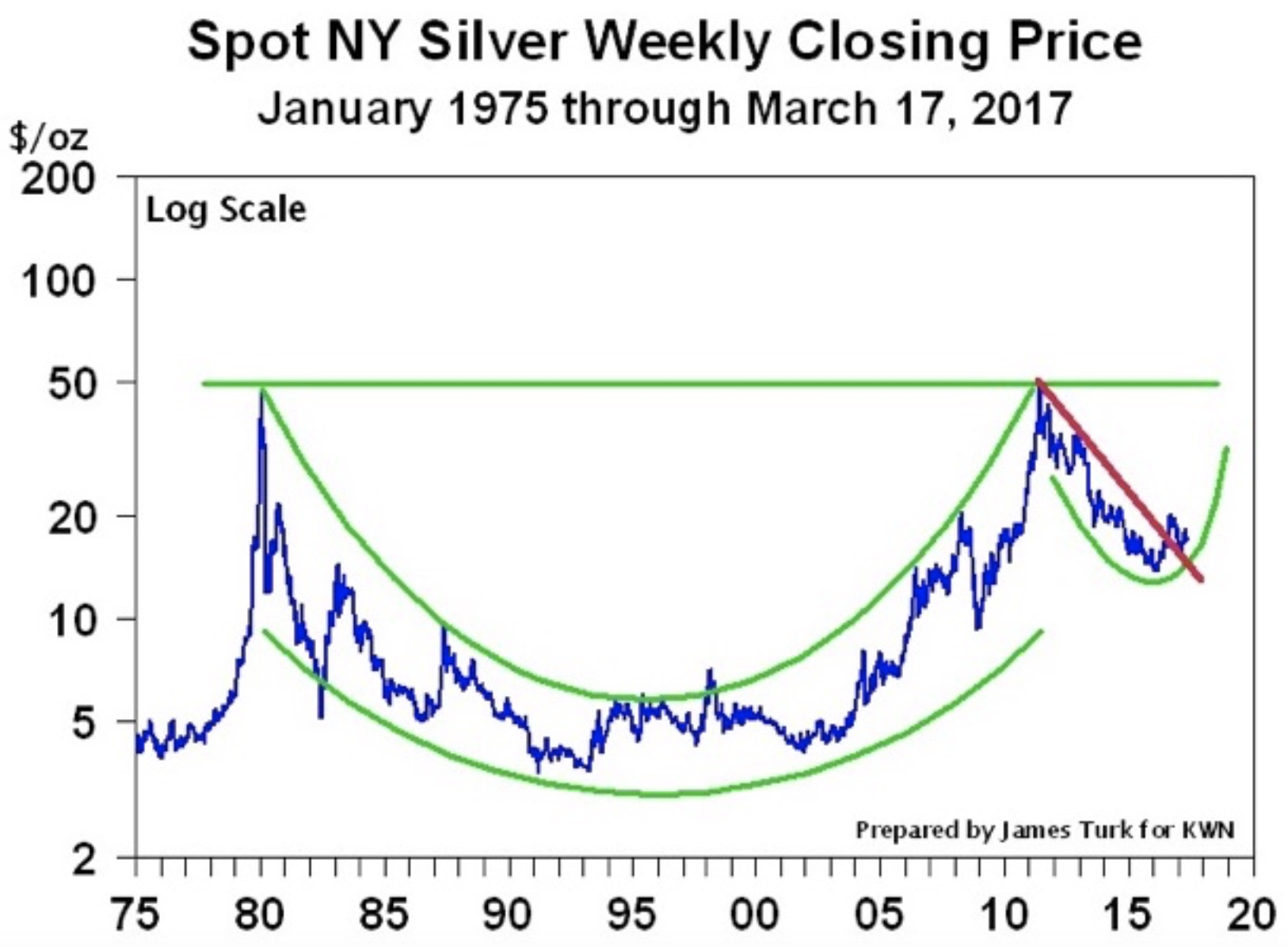 The Massive 47-Year Cup And Handle
I’ve presented the above chart before, so it is familiar to KWN readers. The message from this chart is very important. What we see here is a major basing pattern. It is conveyed by a multi-decade ‘cup-and-handle’, with the handle now being formed. The good news it that the downtrend in the handle has been broken, meaning that the next major upside target for silver is the ‘rim’ of the cup at $50.

So silver has turned the corner. What we need now, Eric, is just a little more upside action. It is only a matter of time before that happens, and after last week’s strength, I expect that we won’t have to wait long.”

***ALSO JUST RELEASED: What In The World Is Going On Here? Key Indicator For Banks Just Cratered CLICK HERE.