Ahead of this Wednesday's FOMC announcement, today one of the greats in the business spoke with King World News about why gold is about to repeat one of its greatest upside moves in history.  He also included a fantastic 5-decade chart to go along with his powerful interview.

James Turk:  “We should not be too surprised that gold and silver have begun the week with some downward price pressure, Eric. The Greek election results are now known, so there has been some “buy the rumor, sell the news” pressure from that….

These events in the past have generally been met with downside price pressure on the precious metals as central planners and gold bears gang up to try driving the gold price lower. And with gold rising $160 and silver $3.50 from their November lows, some traders may see this week as an opportunity to take some profits before option expiry, or just in case the FOMC makes some surprise announcement. 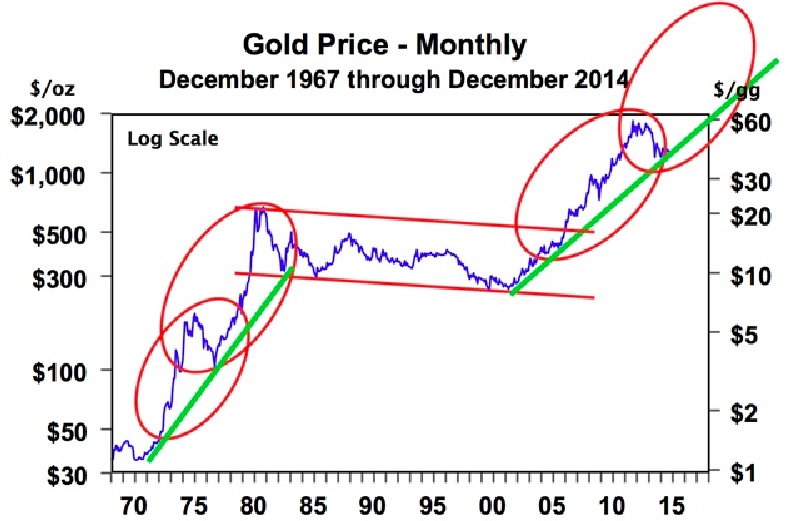 From the late 1960s to January 1980 gold rose from $35 to $850 at its peak. The green uptrend line marks gold’s ascent back then, but note that this major bull market had two distinct price moves, marked by the two red ovals.

1970s Gold Rise And Parallels To The Present

The first peak occurred in 1974 at $200, after which there was a 2-1/2 year correction that brought gold all the way back to $100 and its green uptrend line. Then from August 1976 gold began its remarkable multi-year rise. Note how gold never really looked back. It kept climbing without any major correction.

Gold’s ascent was driven by the Federal Reserve’s money printing. Of course the money printing really started in the 1960s when President Johnson busted the federal budget with his reckless “guns & butter” spending on the Vietnam War, while at the same time launching new welfare programs. I think there is an interesting parallel to the present.

Central bank money printing has been well established for years, and the gold price has risen, just like it did up until 1974. We have now had a correction, again repeating the experience of the 1970s.

History About To Repeat As Gold Price To Soar

So, Eric, the question becomes: Is gold ready to launch higher, again repeating its experience from the 1970s? I believe it will repeat, and that the above chart provides an insightful roadmap into what we can expect for gold. It looks like the second leg of gold’s 21st century bull market began from the low price reached this past November. To learn about how online casino websites works and educate how best casino sites operate.

The circumstances today are of course different from the 1970s. And as Mark Twain so cogently observed, history doesn’t repeat – it rhymes. But the driving force behind the rise in the gold price this century is exactly the same as the key factor that caused the gold price to rise in the 1970s — central bank money printing.

What central banks are doing is turning government debt into currency, which even a cursory reading of monetary history makes clear is a recipe for disaster and the primary reason the gold price will soar.” ***ALSO JUST RELEASED: A Terrifying Look At What The World Faces – A Number Of Dire Warnings CLICK HERE.