After the world experienced a second black swan event last week and the ECB just announced a 1.1 trillion euro stimulus program in a desperate attempt to save the European banking system, today King World News is featuring a piece from one of the greats in the business which points out that all eyes are now on gold as global stock markets are set for a rough 2015.

January 22 (King World News) – "Rocky Horror Picture Show" was a satirical film production done as a tribute to the science fiction and horror "B" movies of the late 1930s through the 1970s. I was reminded of the flick recently when one portfolio manager I saw in Fort Lauderdale said to me, "The first few weeks of the New Year have been an absolute horror show!" Horror indeed for in those weeks the D-J industrial Average (INDU/17511.57) has traveled nearly 3100 points as measured by its movements between the intraday highs and lows.

That caused another Wall Street Wag to lament, "Periods of low volatility have always been followed by periods of increase volatility." Surprisingly, however, the senior index is still within 1.75% of its December 31, 2014 closing price. The frantic movements are kind of like rocking in a rocking chair, lots of motion getting you nowhere. Yet, readers of these missives should not have been surprised by what's transpired year to date.

Recall it was late last year when we said (as paraphrased), the timing models that have served us so well this year are indicating a rocky start for the New Year. Accordingly, if you have stocks in your portfolio that have not rallied in the straight up move beginning in June of 2012 (that just happens to be when the low volatility began), you may want to consider selling them and raise some cash for opportunities that should present themselves in the first few months of 2015. So far that has been decent advice. So what's happening now with the stock market?

Well, in a recent Morning Tack we wrote, "Look for some kind of trading low, but I don't trust it." And with that statement, my email box lit up with the question asking me to expand on that statement. Since I was slammed between speaking at events in South Florida and seeing accounts, my colleague Andrew Adams wrote the next day's Morning Tack and I did not get the chance to elaborate, so I will do so here.

Given the "black swan" event the Swiss National Bank (SNB) pulled off, the S&P 500 (SPX/2019.42) swooned early the next day and, in the process, tested the lower end of its 1990 – 2000 support zone. That left a number of indicators very oversold and a trading rally was to be expected. Subsequently, I told folks I thought the logical upside target for the S&P would be the 2030 – 2040 overhead resistance zone, but following such a rally I would expect the SPX to begin another leg to the downside. Hereto, the first part of that "call" has proven correct. The reasons for Friday's strength (1-16-15), over and above the oversold condition, were the rumor mongers.

First was a rumor the Fed had called an emergency meeting in reaction to various financial casualties caused by the SNB's unpegging of the Swiss franc. The thought was the Fed would supply some sort of liquidity to the system. The second rumor was that there has been a modified quantitative easing (QE) program worked out that is acceptable to Germany. The third rumor was along the same line in that the SNB's action almost assured the implementation of some sort of QE announcement at the upcoming European Central Bank (ECB) meeting; and that rumor has a ring of truth to it.

Verily, the SNB's franc surprise looks like a preemptive move suggesting the Swiss fully expect a QE announcement at the ECB meeting. It also suggests the ECB is going to monetize the European debt, which should raise inflation expectations putting a tailwind in place for precious metals. While I am still not a fan of the metals, or commodities in general, a QE announcement could produce a decent short-covering rally given the oversold relationship between crude oil and gold (see chart below). 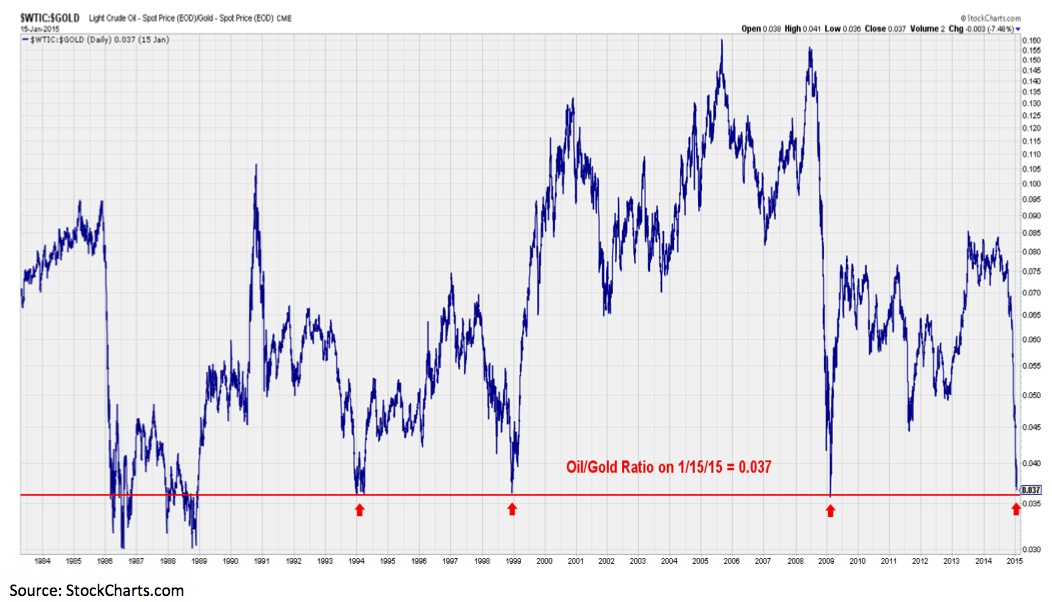 A QE announcement could also have a "flight to quality" move for our treasury bond/note markets and maybe that's why the 10-year treasury note's yield is below the dividend yield of the S&P 500. In my notes I could not determine how often that has happened, but my guess was – not often – so I dialed up my friends at the brainy Bespoke organization and queried Paul Hickey and Justin Walters for the answer. Here's their response (as paraphrased):

The chart below provides a comparison of the S&P 500 to the dividend yield/treasury yield spread going back to 2008. 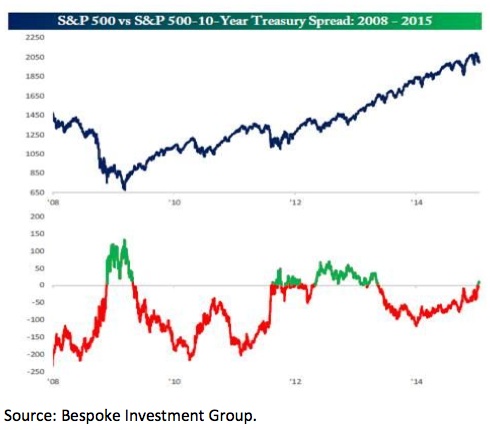 The table below lists each time since 1962 that the spread in yields between the S&P 500 and the 10-year treasury moved into positive territory after not having done so for the last six months. For each period, the first day the dividend yield exceeded the yield on the 10-year is listed, and then the performance of the S&P 500 over the following one, three, six, and twelve months (see chart below).

As the results illustrate, each of these prior instances were great times to buy equities. Following each occurrence, the S&P 500 saw consistently positive returns, with a median gain of 7.8% just one month later to a median return of 33.4% over the following year. While these past performances don't guarantee similar returns going forward, they are pretty compelling.

As an aside, for market history buffs, the 6/22/62 yield inversion was a result of the President Kennedy steel crisis whereby the steel companies increased prices and the president confronted that price raise with a resulting Dow Dive from 700 to 535 (-23.6%), but I digress. Consistent with the message from the good folks at Bespoke, we think the equity markets are working themselves into a good "buy spot." Unfortunately, the "buy spot" probably does not arrive until February or March. The envisioned trading pattern for the S&P 500 should look something like this. 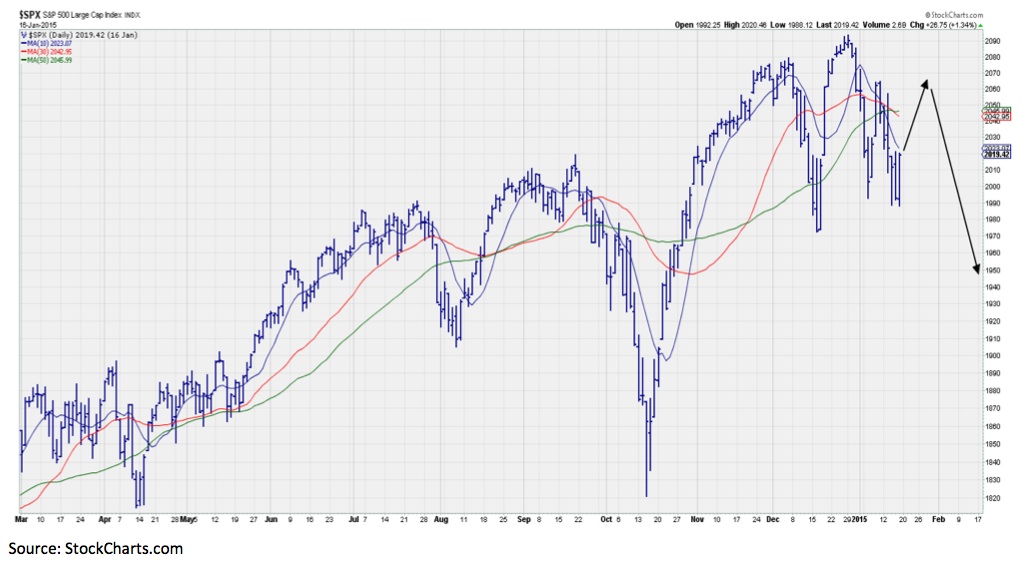 Coming into 2015, I thought Gold was finally showing some signs of life after years of underperformance. This recent strength intensified last week, with the commodity breaking out above a couple of resistance lines, as well as its 20-week moving average. As previously mentioned, this could just be a short-covering rally, but these bounces can lead to some quick gains and the chart is now forming both higher highs and higher lows, a positive sign. 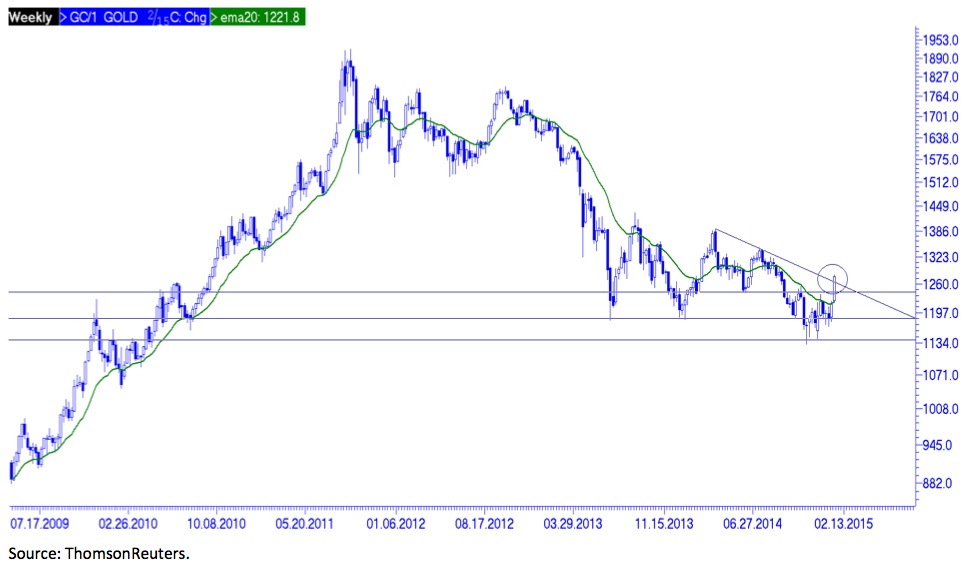