On the heels of the remarkable news from Andrew Maguire today that HSBC is closing all of their gold vaults in London, today the top trends forecaster in the world called the news from Maguire “groundbreaking and earth-rattling.”  Celente then stunned King World News by exposing why this will shake the very foundation of the gold world.

Eric King:  “Gerald, your thoughts on this remarkable news that Andrew Maguire exposed to KWN that HSBC announced they are closing all of their gold vaults in London — a real shock for their clients.”

Another Shocker – HSBC Is The Custodian For GLD

Gerald Celente:  “It should be a shock and it’s big news as is the rest of Andrew Maguire’s insights (in his KWN interview).  What’s so important about HSBC closing down all 7 of their London gold vaults is that the Spyder Gold Trust, ticker symbol GLD, the custodian of that GLD gold is none other than HSBC….

King World News: Continue reading the Gerald Celente interview after a key CNBC piece below regarding HSBC and their role with the gold ETF GLD:

[From CNBC]:  “While there are several gold exchange-traded products available, the SPDR Gold Trust, with over $60 billion in assets, is far and away the largest.

OK, so when you invest in the GLD you have an ownership interest in a Trust, which owns gold. Where is the gold, and who looks after it?

That is the job of the custodian. In the case of this ETF, the custodian is HSBC. The firm is responsible for safekeeping of the bars.

Where is the gold?

In the case of the GLD, in a vault in London…HSBC is required to notify Bank of New York every business day about the amount of bullion that is moved in and out of the allocated account. Every month HSBC also provides a weight list that identifies each bullion bar being held.” 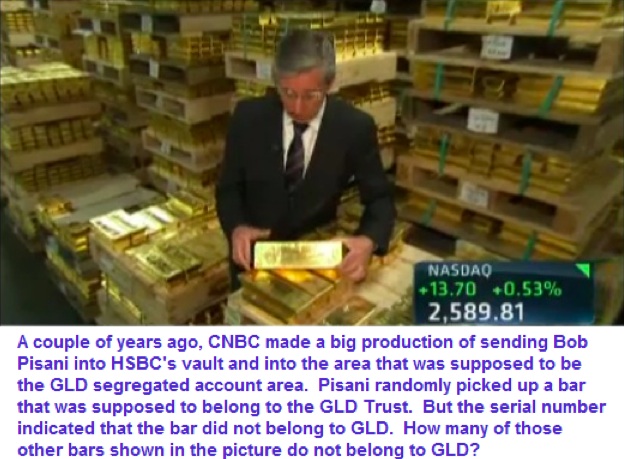 Is The Gold Even There?

Gerald Celente continues:  “So if they are closing down all the vaults, where is the gold going?  Who’s going to be holding it, or is it really even there (in the vaults)?  So this should be shocking news to everyone that the Spyder (GLD) gold is now crawling out of HSBC vaults, going to whom?

Who will be the new custodian?  Who is seeing if the gold is really there?  So this is shocking news because this also puts a dark cloud over the whole GLD Spyder (Gold Trust) experiment.”

Eric King:  “Gerald, when you say this puts a cloud over GLD, how do you think this will unfold in terms of how institutions view (the safety of) GLD?”

Celente:  “This is huge news and King World News and Andrew Maguire are the ones who are breaking it.  And it’s not hitting the wires (of the mainstream media) as it should.  How many people really know that the Gold Trust is supposed to be in hard bullion that’s being held by a bank that’s now closing its vaults?

So how many people (and institutions) that are in GLD know the details of who is holding what and how much of what they are holding and where it is?  I would say very few.  And less than very few know, according to the groundbreaking and earth-rattling interview by Andrew Maguire, that HSBC is going to be closing their 7 (London gold) vaults.  That is huge news that should be headline news (in the mainstream media).” ***Celente's remarkable "KWN Gold Special" audio interview has now been released.  This is one of the most important interviews Celente has done with KWN where he covers Friday's smash in gold and why the dramatic news from Maguire will shake the gold world and you can listen to it by CLICKING HERE OR ON THE IMAGE BELOW.