As the world edges closer to the next crisis, today the man who has become legendary for his predictions on QE and historic moves in currencies shared with King World News the most important chart of this century and what will take the world by surprise.

Central Banks Continue To Menace The World
March 24 (King World News) – Egon von Greyerz:  “The astonishing Fed again proved the consistency of its inconsistency. Since its creation in 1913, the Fed has always been behind the curve. It is hard to believe that this is just incompetence but the recent change of policy hardly seems to be part of a plan. Looking back at the Fed’s policy decisions, it is clear that decisions are reactive rather than proactive. 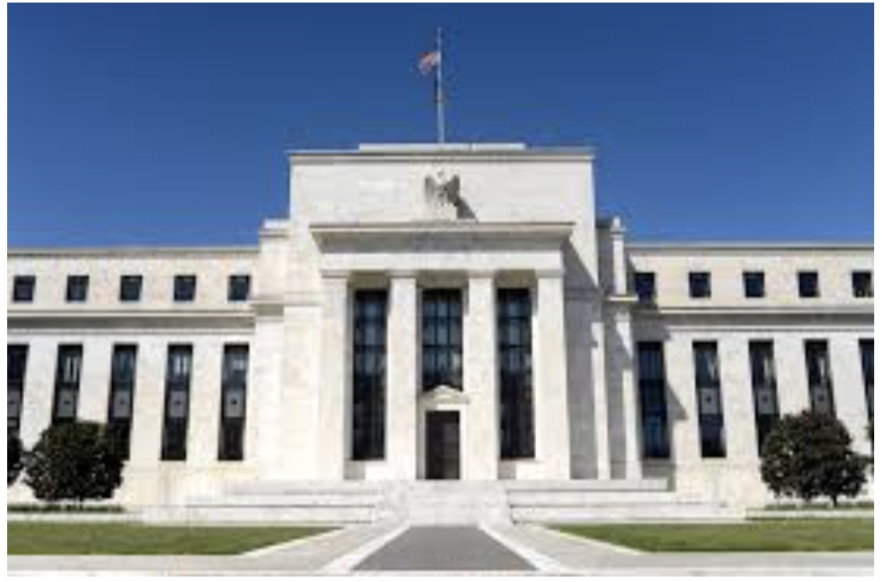 Central banks have been totally detrimental to the world economy. They serve no constructive purpose whatsoever. As a matter of fact, they are a menace to the world and actually make things a lot worse than they would be if the laws of nature would rule. The natural rhythm of ebb and flow would regulate markets effortlessly without the need for artificial interference by central banks. If demand for credit is too high, the law of supply and demand would restrict the supply by interest rates going up. And if there was no demand for credit, loans would be cheap with rates going down.

Instead, what we have now is manipulated rates at zero or negative and more debt outstanding than ever in history. That breaks all laws of nature and can only happen through false markets. This has led to global debt tripling in this century. No wonder we have massive bubbles in stocks, bonds, and property, together with debt that will never be repaid.

Stocks stabilized and rates were raised to 5% by September of 2006. Then came the subprime disaster and the reactive Fed slashed rates to virtually zero by December of 2008. Rates stayed at that level until December of 2015. Seven years of zero interest rates did wonders for the stock market and also gave the illusion of a growing economy. The red arrows in the graphs clearly show Fed decisions were caused by a panic reaction to unforeseen events. At none of these periods did the Fed forecast the latent disaster. Clearly none of their models work, nor do they see that rather than solving problems, they are the cause of the problem.

Obviously economies will grow in nominal terms if central banks around the world print trillions of dollars, euros, yen, renminbi, etc, and at the same time set interest rates at zero or negative. The only problem is that more and more money needs to be printed for economies to simply remain stagnant because if you could create wealth by printing money, why would anyone need to work?

As the US economy deteriorates, rates are more likely to go down than up. Eventually there will be full blown QE of a magnitude that will dwarf the 2007-9 money printing. But I don’t expect rates to stay low for very long. First, the dollar will fall precipitously. Then international credit markets will panic and start selling US treasuries. China and Japan have more than $1 trillion each of US debt and they will dump it as fast as they can. This will start a vicious cycle of falling bond markets, higher rates and a crashing dollar. Central banks will then totally lose control of rates as the long end of the market pulls the shorter rates higher. As the money printing intensifies, inflation will surge putting further upward pressure on rates. At some point in the next few years, rates will at least reach the 1980-81 level of 20%. With hyperinflation and defaults, rates could go even higher.

A 21% Mortgage And Unlimited Money Printing
This is of course nothing new in history. I remember when I lived in the UK in the 1970s how rates and inflation were in the mid to high teens for several years. For a while I paid 21% interest on my first mortgage in the UK. How many people could afford that today? Very few. Nor could any country service its debts even with rates going up just a couple of percent. With the much higher rates that I am forecasting, debts can only be serviced through unlimited money printing of worthless fiat money. This will further put pressure on the dollar and other currencies and accelerate the decline to their intrinsic value of ZERO.

This is not a scenario that many people could believe today but as we know, optimism is at a peak just before markets turn. We could be at that point now. My preferred scenario has always been that markets topped in the autumn of 2018. Most European and Asian markets are well below their peaks. The US market has attempted to make new highs but so far failed. When a market is in a perma-bull mode, all news is good news. Higher rates mean a strong economy so the market goes up. Lower rates stimulate the economy so the market goes up. But in spite of continued uber-optimism, the Dow has so far not managed to break the highs. And why should it when earnings forecasts are looking grim and the economy is turning down.

I regularly meet and give talks to family offices and other ultra-high net worth individuals. Even today, there is virtually no fear among these groups that the trend in markets will reverse. Nobody sees any risk in the bubble asset markets such as stocks and bonds. Many of them are all like Alfred, born at the end of WWII, successful in their professional life, and have made big profits on stocks by permanently being long the market. The fact that trees don’t grow to the sky hasn’t entered their mind. If you can make a fortune from investing over a 50 year adult life, why wouldn’t it continue? Very few can fathom that they have been living in an era fueled by credit expansion and money printing, which has artificially propelled asset markets ever higher.

Snap Back Will Take The World By Surprise
But if it has lasted 50 years, why can’t it continue another 10 years or more? In theory this is possible but we are no longer just talking about one market or just the West. No, this rubber band has been over-stretched all around the world from Australia in the South to Norway in the North and from China in the East to California in the West. The snap back will come out of the blue and take the world by total surprise. After a short hyperinflationary money printing period, global assets and debts will implode and we will see a fall in global wealth of at least $200 trillion in today’s money. And much more in hyperinflationary money.

In coming years, the world will experience the biggest wealth destruction in history and it will come as a total shock to 99.5% to investors. For the 0.5% who are prepared for this, it will be the opportunity of the century. It will be “The Biggest Short & The Spectacular Long.” The short is obviously asset markets such as stocks, property and bonds, and the long is precious metals like gold and silver. But this trade won’t work like it did in the 2006-9 crisis. This time financial markets are unlikely to perform and counterparties will fail. Therefore, buying financial futures contracts or derivatives will serve no purpose since no one will be in a position to cash in.

So this short and long will have to be played differently. This time the short side means getting out of all the bubble assets and having a minimal exposure to stocks, bonds, etc. And the long side doesn’t mean buying ETFs or futures. Instead, investors most own physical assets like gold and silver and store them outside the financial system.

The Most Important Chart Of This Century
The graph below shows what it will look like. It is the 200 year Dow/Gold ratio (the price of the Dow divided by the gold price). This ratio crashed to 1 to 1 in 1980. This means that the prices of the Dow and Gold were the same at 850. As stocks rose and gold came down, the ratio peaked at 45 in 1999. It then fell by 87% to 5 in 2011 as stocks crashed and gold surged. Since then we have seen a correction up in the ratio but the Dow is still down 57% against gold in this century. And now the ratio is ready for the resumption of the downtrend, which is likely to overshot the 1999 level at 1. Instead it will reach 0.5 or much lower. This means that the Dow will fall at least 98% vs gold from today’s level. 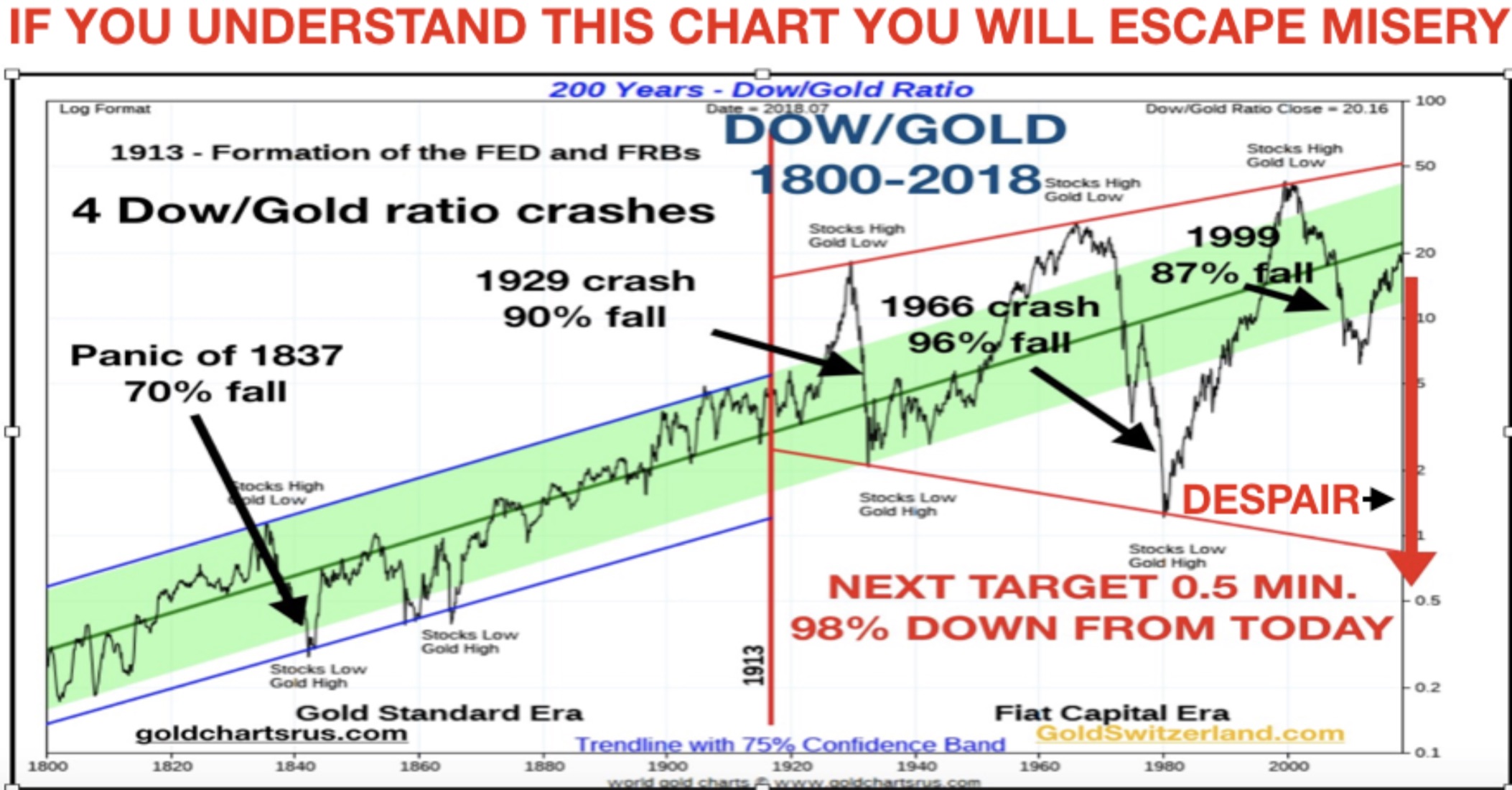 $10,000 – $50,000 Gold
So the choice is simple. Hold on to stocks and see them decline by at least 90% like 1929-32. Alternatively, investors who sell their stocks and buy gold will, instead of losing most of their wealth, benefit from gold going up to levels which are unimaginable today. That could be $10,000 or $50,000 even in today’s money. Add many zeros to that when we get hyperinflation.

Similar moves could be expected in both bonds and property vs gold. As credit markets crash and rates surge, there will be major defaults including sovereign defaults. Most major nations won’t officially default because they will instead introduce a 10-100 year moratoria, which, in effect, is another way of defaulting. In addition the dollar and other currencies will be debased to virtually zero, making most bonds worthless. The same thing will happen with property markets. Bricks and mortar have no value if the property doesn’t return a yield in the form of rent. A very high percentage of tenants will be unable to pay rent or service their debts, leading to major defaults in real estate lending and a crash in property prices.

So investors who get out of stocks today and buy gold will not only save themselves from ruin but also make a considerable fortune in gold. But sadly, less than 1% of investors will be prepared for this and therefore will experience a total destruction of their wealth built up over a lifetime…For those who would like to read more of Egon von Greyerz’s fantastic articles CLICK HERE.

***Also just released: Peter Boockvar: “Don’t Think The Fed Or Other Central Banks Are Going To Save Your Ass, It’s Time To Buckle Up And Own Some Gold CLICK HERE TO READ.