Today the man who has become legendary for his predictions on QE and historic moves in currencies and metals warned investors to expect a crisis in world stock markets, global economic depression and despite volatility, skyrocketing gold & silver prices.

August 9 (King World News) – Egon von Greyerz:  Two major asset classes are major beneficiaries of the unlimited money printing and credit creation that is now taking place globally. One of them will end in tears and the other one has just started a major secular bull market.

As the world economy and financial system is disintegrating, investors are under the illusion that all is well with many stock markets still not far from their all time bubble highs.

THE DISCONNECT BETWEEN STOCK AND THE REAL ECONOMY CONTINUES
Many companies and services are hemorrhaging cash and are not going to recover for years, some never. As very few people are travelling, many airlines, cruise lines, hotels and restaurants, for example, will not survive. This is a global industry that employs 330 million people and represents 10% of global GDP. International tourism could fall as much as 60-80% in 2020 according to some estimates.  The car industry is 3% of global GDP and is expected to drop 25% in 2020.

Real and hidden unemployment is a major problem and if furlough or social benefits are stopped, many people will not survive. As many can’t pay their rents they will also become homeless.

Currently 31 million Americans are on some kind of unemployment benefits. That is 20% of all workers. But if we include workers who are not receiving any benefits the total unemployment is 30% according to Shadow Government Statistics. This is worse than in the 1930s depression. 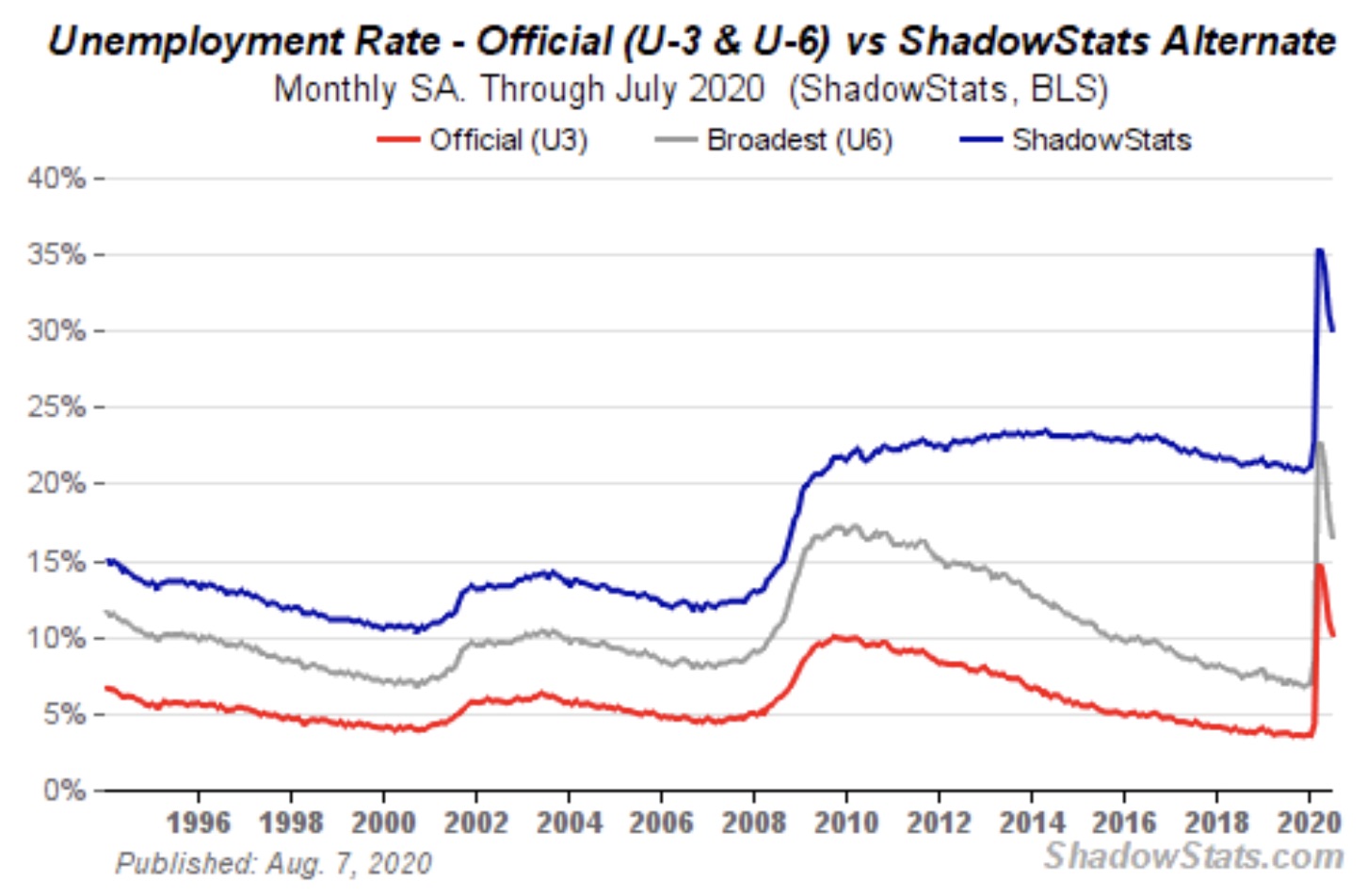 DREAMLAND STOCK INVESTORS IGNORE DEFICITS
Stocks market investors still live in Dreamland and translate all the bad news to good news as the continuous flood of printed money and credit inject liquidity. This has always worked before so why won’t it this time? No one knows what the US deficit will be at the end of calendar 2020, but it could easily be $10 trillion as the debt grows to over $30 trillion on to $40 trillion within a year or two.

How wonderful for stock investors. More liquidity means higher share prices. Very few understand that all this money has zero value as it has been created out of thin air. Also, none of the money goes to productive investments, but instead just to give a dying economy some temporary artificial respiration. So the worthless money will go to individuals and businesses just to survive. It will also in ever bigger quantities go to an extremely fragile financial system. In the end $100s of trillions and later quadrillions of dollars of worthless money will have been spent on non productive survival aid…

It is possible that the stock mania continues based on the fake trillions created. But at some point soon, stock markets will wake up to the nightmare the world is experiencing.

GOLD REVEALS THE DESTRUCTION OF PAPER MONEY
There is at least one asset class which reacts sensibly to the problems in the world and the continued destruction of paper money. Gold is up $200 in the last two weeks and $500 or 33% in 2020. Since the Maginot line at $1,350 was broken in June 2019, gold has gone up by more than 50% as I discussed already back in February 2019. 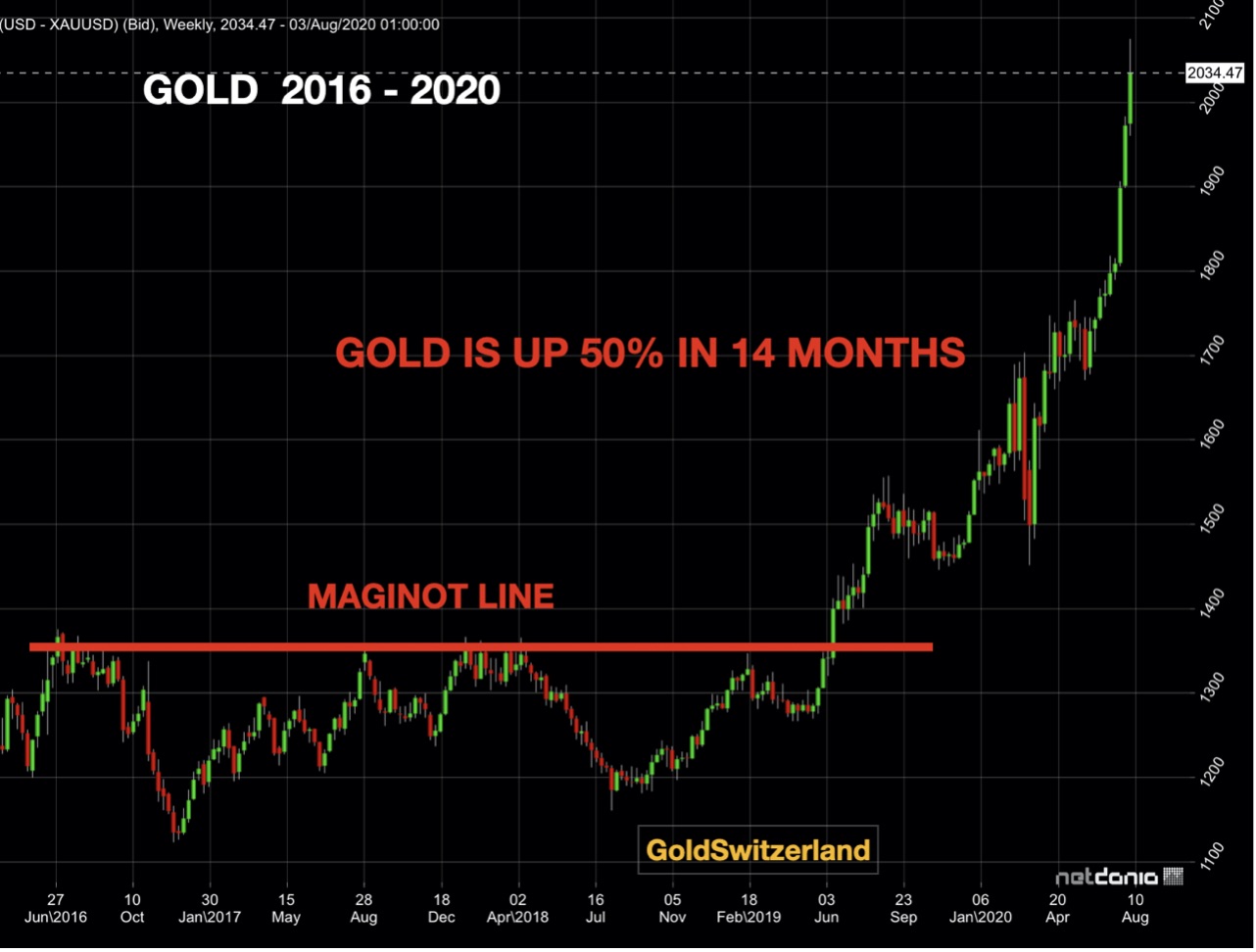 But the spectacular market has been silver, which has virtually exploded as I have been predicting in the last few weeks. 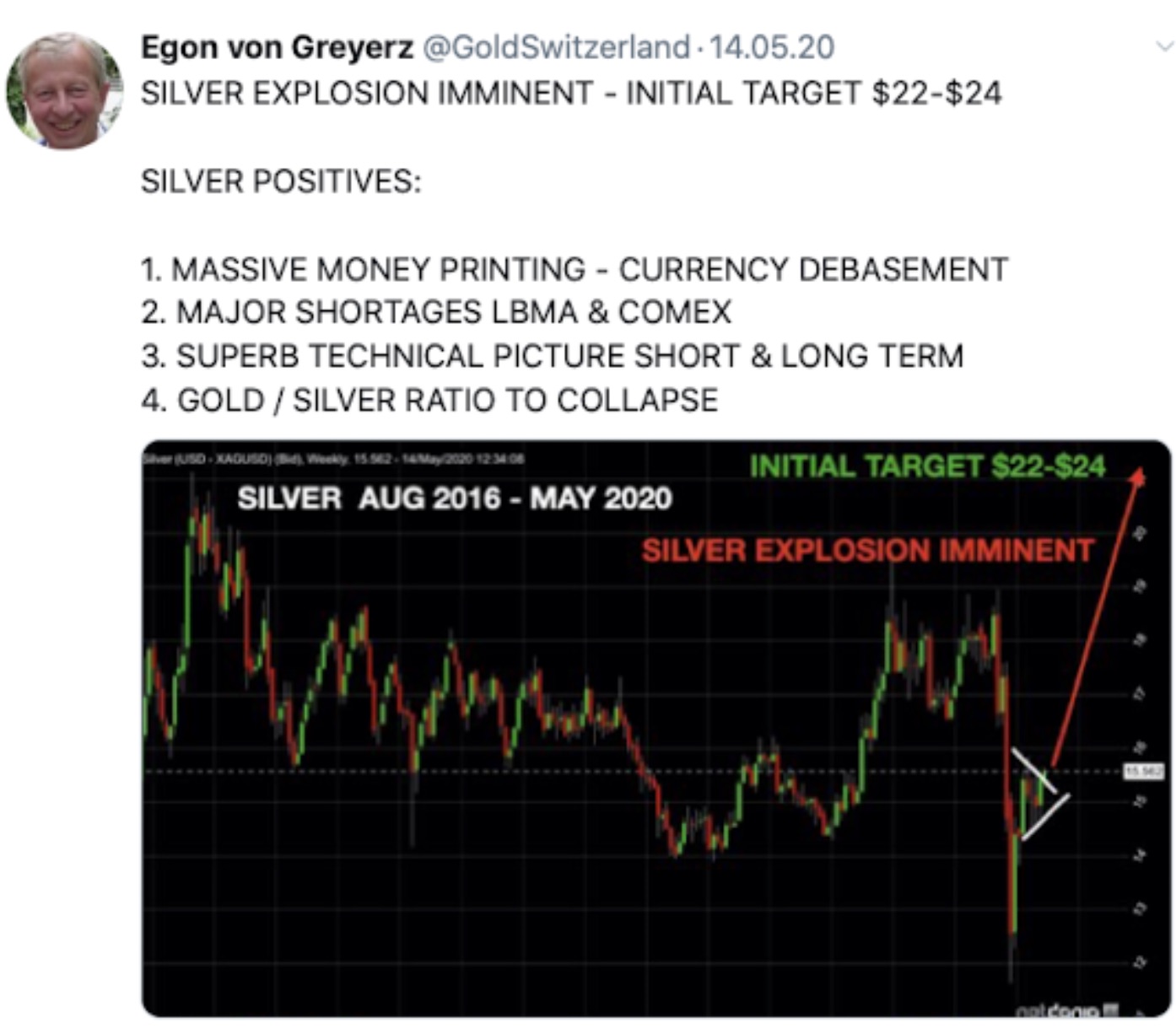 The Tweet was timely as silver started to move up the following day and surged $10 in the last three weeks to just under $30. Silver bottomed at $11.60 on March 18th and has gone up 2.5x since then.

Silver Has Entered The Explosive Phase 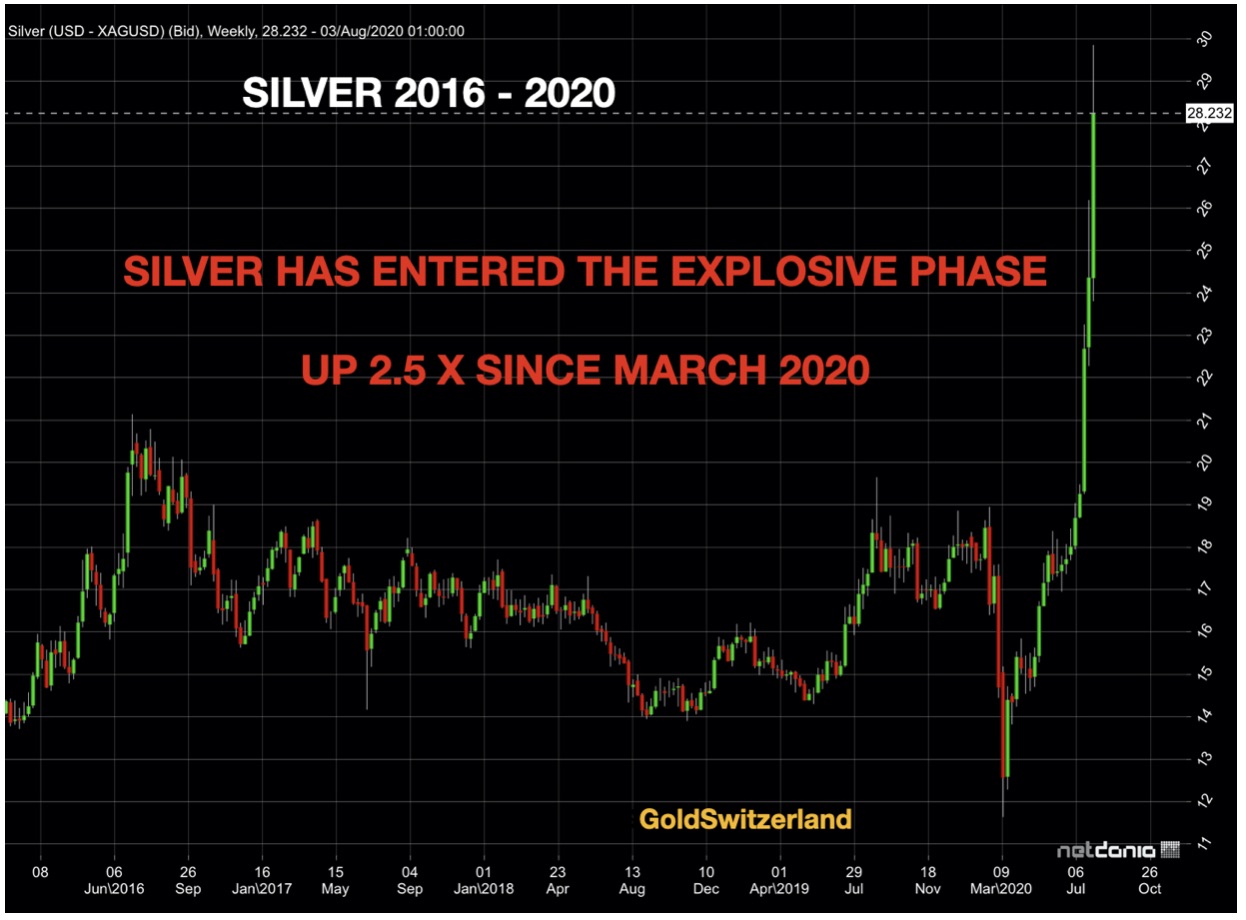 SILVER IS EXPLODING
Silver is now in an explosive phase on the way too much, much higher levels. But the corrections will also be vicious. With such high volatility we have always advised investors not to hold more than 25% in silver and 75% in gold. Sleeping well at night is an important part of your investment strategy.

The moves we have seen in the last few weeks in gold and silver are just the beginning. The long term bull market is well established and will go to heights that no one can imagine today. And we will see much bigger daily and weekly moves than we have just experienced as the market panics due to dire financial news combined with major shortages in physical gold and silver. I would not be surprised to see gold move by $100s and silver by $10s in a single day.

GOLD ETFs ARE JUST PAPER GOLD AND MUST BE AVOIDED
The gold market has this year not just been booming in price but also in volume. For lazy investors, gold ETFs are the most convenient instrument. But buying a gold ETF is in most cases just an investment in paper gold.  The holder of the paper has no security in the physical gold.

The total investment into gold ETFs and gold funds is today $316 billion or 4,878 tonnes, which is a record. The increase in 2020 in the total value has been considerable and amounts to $160 billion, which is a 100% increase since the end of 2019. 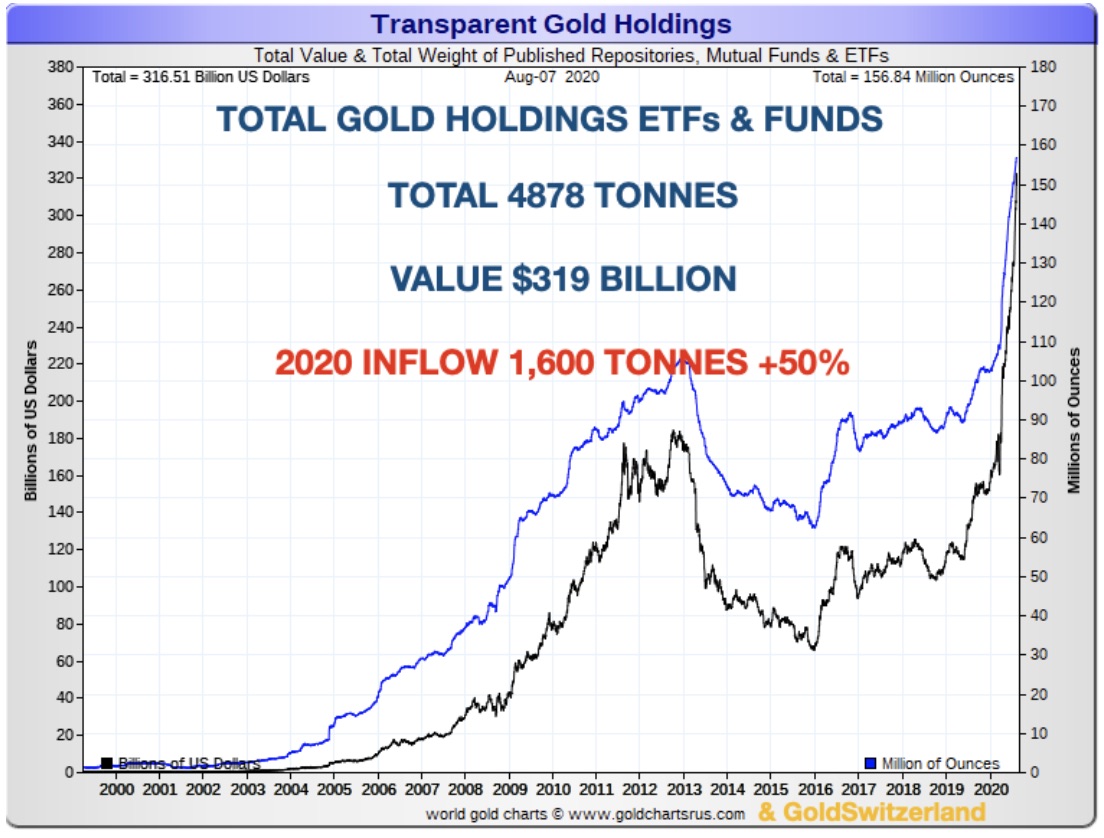 So all gold ETFs and Funds are today valued at $319 billion. If we compare that to the S&P 500 total market cap of $27 trillion, it is totally insignificant. The top 5 companies in the S&P Index are worth $6 trillion. Just take Apple that with their $200 billion cash pile and some stock could easily acquire all the gold funds and ETFs. This tells us how small the gold market is. In the next few years as stock markets crash and gold surges, the relative sizes of stocks versus gold will look very different. 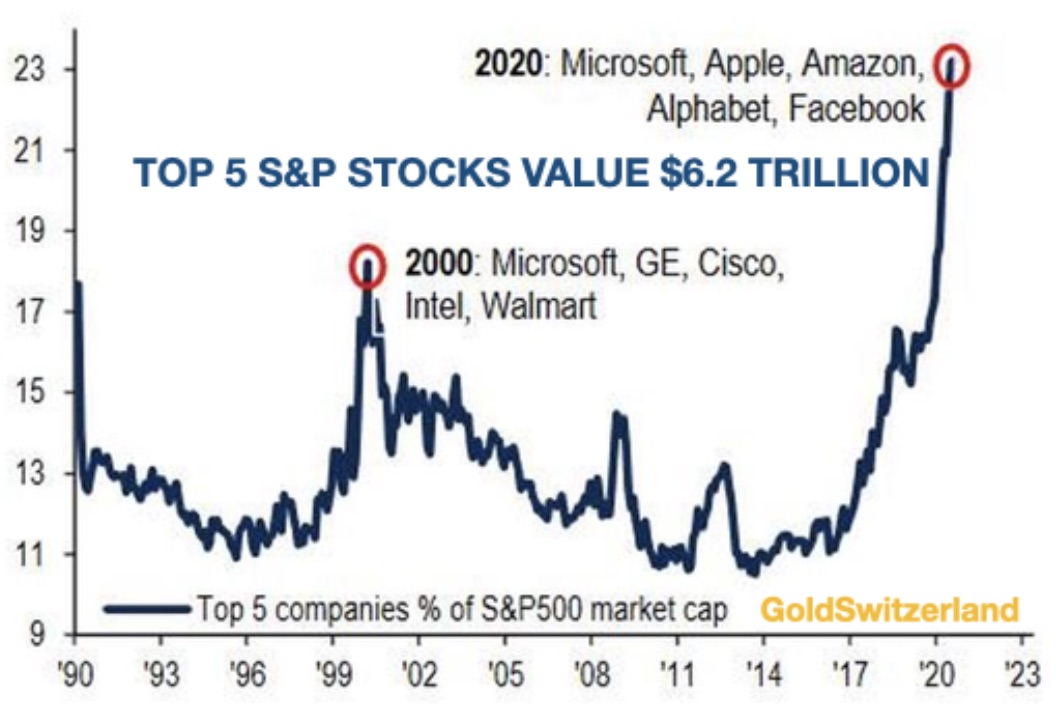 GLD STATE STREET GOLD ETF – AN INVESTMENT IN PAPER GOLD
The biggest gold ETF is GLD or State Street. GLD holds a total 1,258 tonnes with a value of $82 billion. This makes GLD the 7th biggest holder of gold in the world. 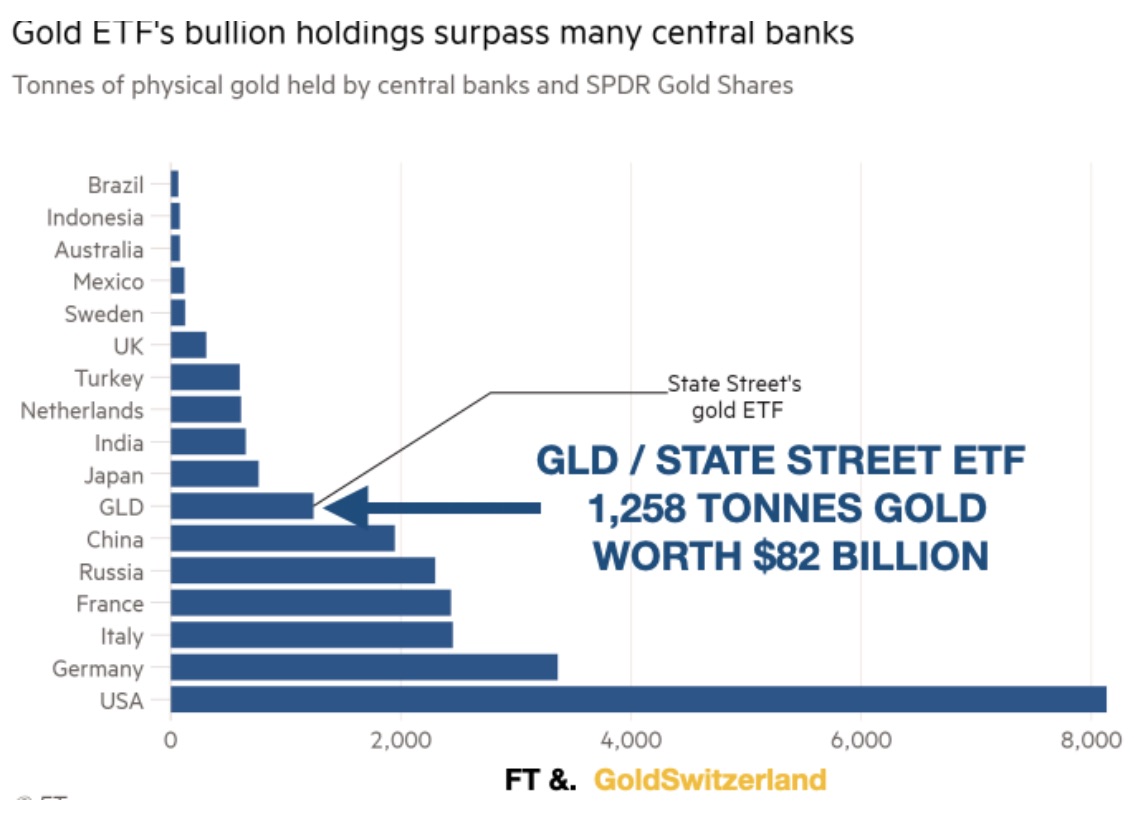 GLD’s value has gone from $42 billion at the beginning of 2020 to $82b today as both inflow and the gold price have increased. This ETF is the primary investment vehicle that investors use when they want exposure to gold.

What most investors don’t understand is that to own a gold ETF like GLD is no better than to have a futures contract in gold.

An ETF is a tracking vehicle and doesn’t own the gold. The gold is not bought outright by GLD but is instead borrowed. The holder of an GLD share has no claim on the borrowed gold and therefore does not own anything tangible. Thus all he holds is a piece of paper with no underlying security in the form of gold in case of insolvency. The gold is borrowed or leased from a central bank and not bought with clear title. So a shareholder in GLD is just a holder of a piece of paper that doesn’t entitle him to physical gold. A paper claim on gold is very different from owning real physical gold. The gold price could surge but the ETF could still go bankrupt.

As I have often pointed out, when an ETF like GLD buys gold, it doesn’t come from the Swiss refiners. Instead it comes from the bullion banks who borrows the gold from a central bank. The GLD ETF has an official audit with bar lists and numbers. But since central banks never publish a full physical audit, there is no way of knowing if the same gold has been rehypothecated several times by the central bank.

So firstly the GLD doesn’t own the gold and secondly the gold that it doesn’t own might have been lent multiple times by central banks.

GLD IS SUBJECT TO MULTIPLE COUNTERPARTY RISK
One of the major advantages with owning physical gold is that it is the only asset which is not someone else’s liability.  But buying a gold ETF like GLD involves multiple counterparty risk with no ownership of the underlying metal.

Investors in GLD buy shares in the fund’s trustee, SPDR Gold Trust. The custodian, HSBC sources and stores the gold for the Trust. This obviously makes HSBC a major counterparty risk. But HSBC also uses sub-custodians, other bullion banks and even the Bank of England to source and store the gold. This means that investors have multiple sub-custodian risk.

GLD INVESTORS DON’T UNDERSTAND WHAT THEY ARE ACTUALLY HOLDING
The above relatively detailed explanation how a gold ETF like GLD functions is intended to enlighten the investors of $82 billion in GLD what they are actually holding.

For wealth preservation investors, GLD doesn’t satisfy any of the criteria of holding a reserve asset like gold totally risk free.

The main problems with buying gold through GLD, as outlined above, are the following:

Thus holding gold through GLD is no better than holding gold futures. For wealth preservation purposes, gold must be held outside the banking system in the safest private vaults in the world. The gold must be controlled directly by the investor with direct access to his gold in the vault. No other party must be allowed to touch his gold without his authorisation.

The gold must be held in the safest jurisdictions like Switzerland and possibly Singapore.

This video clip gives an idea of the mountain vault, but obviously doesn’t reveal any of the major security aspects.

What it does show is how major investors must store their gold rather than holding it in extremely unsafe form like GLD.  Holding physical gold in this mountain vault costs about the same as GLD and is fully insured. Buying and selling is instantaneous. Investors have full access.

Holding physical gold as described above is far superior to any gold ETF with none of the negatives. It is really surprising that major gold investors can even consider an inferior method like a gold ETF…For those who would like to read more of Egon von Greyerz’s fantastic articles CLICK HERE.