Here is a look at the Achilles Heel of the U.S. as the world hurtles toward gold.

Stephen Leeb:  “In the past week, as the new administration talked tough about trade, a word that I learned as an economics major at Wharton sprang to mind: autarky. It’s a fancy term economists use to describe a country that is self-sufficient. The more developed an economy becomes, the less likely it is to be an autarky and the more it depends on trade to maintain the lifestyle its citizens have attained. Today, the two countries that come closet to being an autarky are North Korea and the Himalayan kingdom of Bhutan.

The U.S., however, is anything but, and today, more than ever, we depend on trade with other countries – including, notably, China – for resources that ultimately will be essential to our very survival. To view trading relationships merely through a narrow lens of item-by-item comparisons and gaps between exports and imports is a huge mistake with potentially far-reaching consequences. For it ignores the bigger picture, which is that complex interconnections among critical commodities that we import mean that anything that jeopardizes trade in those commodities could leave us helpless. Launching a trade war could be devastating to the U.S. in ways that no one seems to be talking about…

Here’s why. There are three existential commodities: food, energy, and water, a constellation that we’ve dubbed with the acronym “FEW.” It’s self-evident that they are essential to survival. Equally self-evident is that they are deeply intertwined, meaning scarcity in one portends scarcity in all. What is perhaps less appreciated is that to ensure we have enough, we need resources from other countries.

Let’s focus on water, the FEW component that in the past has been most taken for granted. Water is essential both to growing food and to obtaining energy. And water has grown scarcer – not just because of droughts but because of its increased use in extracting energy combined with insufficient and deteriorating infrastructure that results in a lot of water being wasted.

That’s catching up to us. For the first time in memory, water is starting to take a toll on Americans’ finances. According to the well respected and peer-reviewed website PLOS ONE and Michigan State researchers, the average U.S. household currently pays $49 a month for water. That’s more than 40 percent higher than five years ago, and the figure is expected to rise to $120 a month by early next decade. According to the EPA, at current prices more than 11 percent of U.S. households have to sacrifice other essential expenditures to afford water, the EPA’s definition of unaffordable. At $120, the percentage rises to 33 percent, which would leave a large part of the lower middle class struggling to afford water.

But the real killer is inadequate infrastructure. The bulk of U.S. water infrastructure is more than 70 years old, and some is far older. In Washington D.C., water runs through wooden pipes built circa 1850.

Infrastructure eventually rots as it ages. The American Water Works Association estimates that just to restore existing infrastructure will cost $1 trillion, with an additional half a trillion more dollars needed to ensure that drinking water is safe. Democrats and Republicans seemingly agree on the need to address our infrastructure woes. But even the most generous of the current figures being tossed around not only won’t make up for the growing infrastructure deficit but will allow it to grow, meaning ever more water will get wasted.

An even more basic problem, however, is that it isn’t just a matter of money: it’s a matter of obtaining the commodities that are needed to create infrastructure and other ways of ameliorating the water crisis.

In the accompanying map, provided by the United States Geological Survey, countries in red are ones we depend on for critical resources (see below). 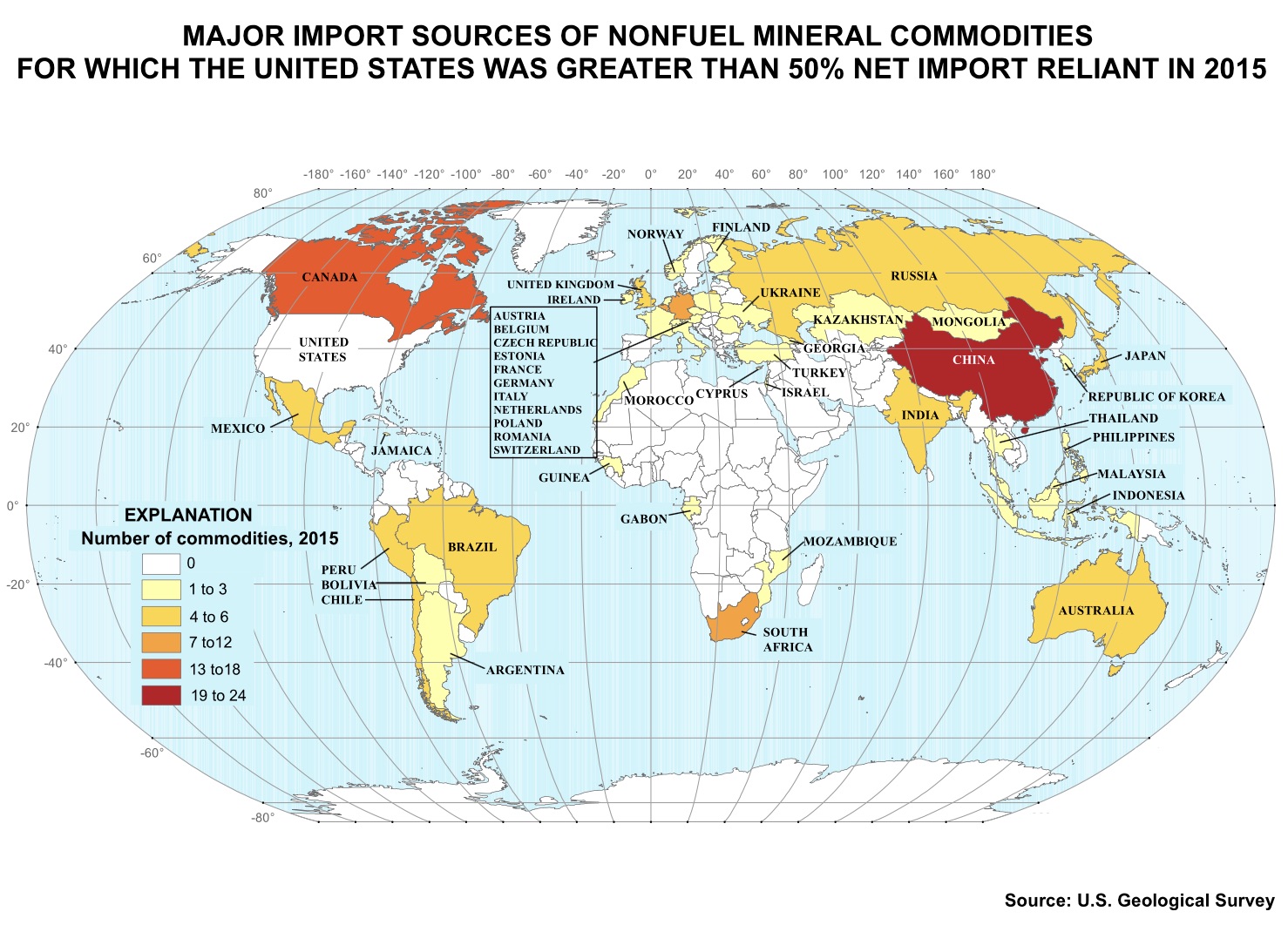 China is the reddest of all. Many of these resources are critical to both water and energy infrastructure. Scandium, for example – which is completely sourced from China – is a metal used in finding underground leaks in water and oil pipes. It also is used in oil refining.

Natural graphite is also 100 percent sourced from abroad, with China and Mexico the largest suppliers. It is vital in products ranging from batteries to steel. If we want to use more expensive U.S. steel to create pipe infrastructure, we still will depend on foreign graphite to make that steel. And then there is fluorspar, another commodity that is 100 percent foreign sourced, with China and Mexico again the leading exporters. Its uses range from stimulating oil and water wells to providing catalytic activity in oil refining to reducing costs of desalinization, the one way of increasing our water supply.

How well would the U.S. fare if we lost access to scandium, natural graphite, and fluorspar, not to mention many other critical resources? Not well at all, and there’s not much margin for error. Water quality and quantity are deteriorating so much that in the fairly near future some one-third of the country will be hard-pressed to afford enough. If current trends in infrastructure spending persist, that percentage will likely rise to well over 50 percent.

In a country with an angry middle class, and an especially angry lower middle class, the rising costs of water are a ticket to a political crisis of epic proportions. Good trade deals are obviously desirable, but it would be massively shortsighted to throw out both baby and bathwater to make them. Trade wars are wars we can’t win.

Moreover, they are wars that for reasons I’ve discussed in previous interviews point to the demise of the dollar as the world’s primary reserve currency, to be replaced, at a minimum throughout the East, by a gold-based monetary system. As critical resources grow scarcer and it becomes ever clearer that we can’t take FEW for granted, commodity producers will become increasingly unwilling to take paper money in exchange for the resources they sell. The nations with the most gold – far and away those in the East – will be best positioned to ensure themselves of access to these resources. And individuals who have invested in gold will be best positioned to protect themselves against what could be shaping up to be tumultuous times. If the case for gold was strong before – and it was – it is growing stronger by the day as rhetoric about trade leads to actions that risk upending the existing norms. The more the prospects for trade wars increase the greater the case for gold.”