Worst Day In A Decade, Big Trouble For Tapped Out Consumers And More

As we continue to see more of the wild trading of the past few months, here is a look at the worst day in a decade, big trouble for tapped out consumers and more.

WORST DAY IN A DECADE: “Beneath The Surface”
September 10 (King World News) – Here is a portion of today’s note from legend Art Cashin:  The “beneath the surface” sector shifts were dramatic enough to hint a huge rebalancing of some kind. Here are some of the shifts as noted by Jason Goepfert at SentimenTrader:

Massive momentum move. On Monday, many momentum traders likely had their worst day in a decade. Stocks that showed the best gains year-to-date suffered some of the worst losses, and stocks down the most so far in 2019 showed some of the best gains. This was the largest one-day shift in momentum since 2009, and a ratio based on long/short momentum is now down 10% from its peak.

Despite the strong implications that such dramatic sector shifts point to some large institutional reweighting, I was unable to find any concrete evidence.

Suffice it to say that some very important shifts occurred yesterday. The next few days will tell us whether it was just a freak accident or an important change.

Negative Interest Rates And The History Of Human Finance – The ECB will meet on Thursday and rumors are that Mario Draghi is likely to push rates further into negative territory as he passes the baton to Christine Lagarde.

Already over $17 billion of global debt is trading in negative territory.

To cite how unique that phenomenon is I would like to harken back to Sidney Homer’s magnificent tome, “A History of Interest Rates”.

I don’t have the book handy but as I recall it was about 900 pages and published around 1965. It discussed not just interest rates but much human economic activity going back to 2000 BC and beyond.

As I recall, it showed enormous ingenuity among humans in pre-historic times. The ancient Sumerians and Mesopotamians had agricultural futures and options markets. Not quite the Chicago Merc, but maybe its cuneiform equivalent (Hammurabi’s code even had some guidelines on settlements).

What is fascinating is that many of these contracts were traded before checking accounts or even currencies.

But for all that economic ingenuity, the one thing that does not appear in the nearly 5000 years covered by Mr. Homer – negative interest rates.

In Europe, the trend is to mildly lower prices. Markets in Paris and Frankfurt are off modestly, while London is seeing fractional losses.

Among other assets, Bitcoin remains mired at the lower end of its recent range, trading this morning around $10,250. Gold is a touch softer, trading a shade above $1500. Crude remains well bid, apparently aided by recent Saudi moves WTI trades just above $58. The euro is flat against the dollar and yields are unchanged.

Big Trouble For Tapped Out Consumers
Peter Boockvar:  Yes, a solid labor market and quicker wage growth has helped to lift consumer spending but we learned yesterday that the bigger use of the credit card gave a boost too and notwithstanding 17.1% average credit card rate as of the end of May. In July, revolving credit card outstanding, mostly credit card debt, rose $10b m/o/m, an 11.2% annualized rate and the biggest one month gain since November 2017 (see below).

BIG HURT FOR ALREADY TAPPED OUT CONSUMERS: Interest Rates On Credit Card Debt Have Been Surging Strongly Since Mid-2017 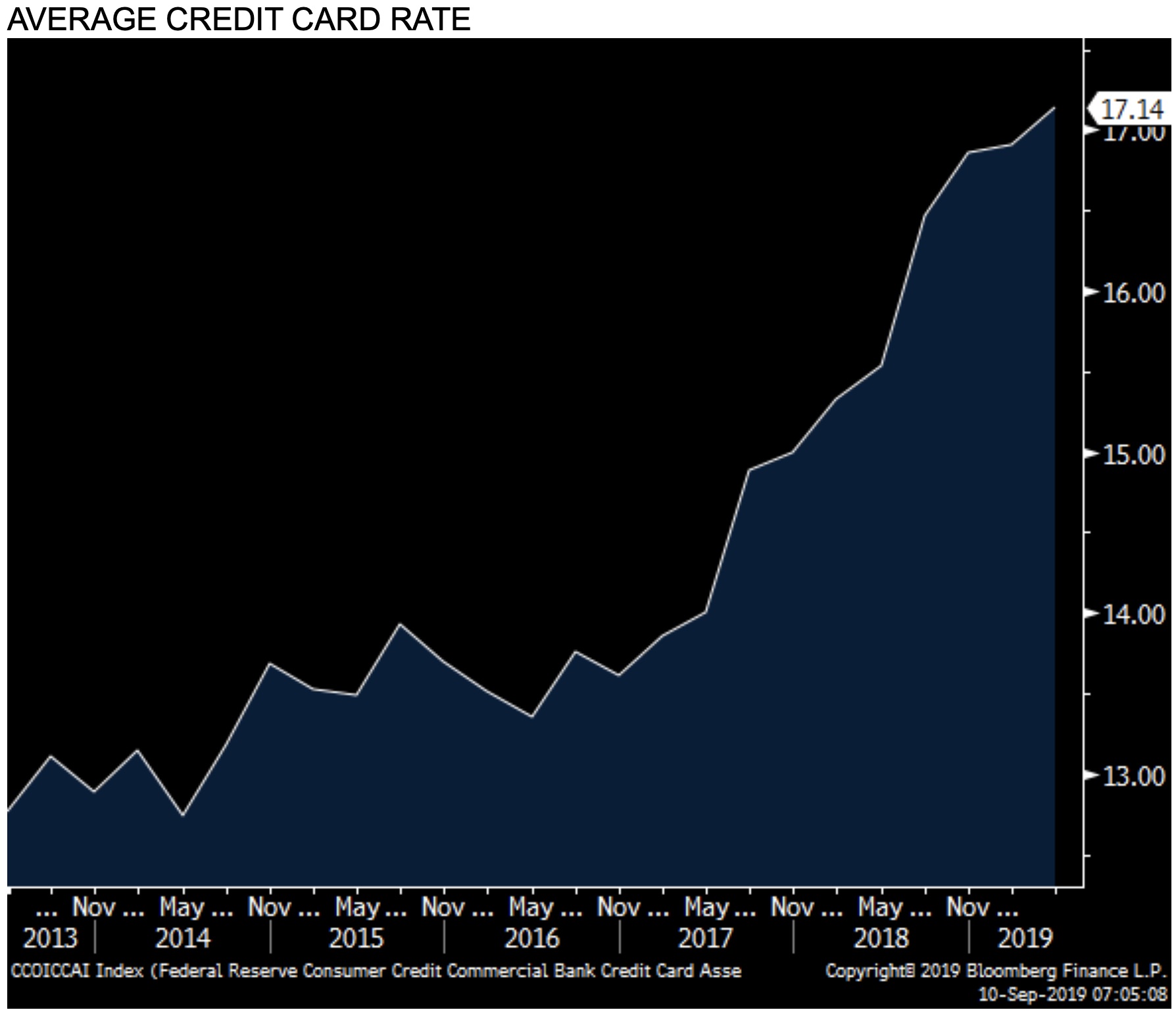 I’m sure Amazon’s 2 day Prime sale helped goosed the number but I have no idea by how much. So, was it a sign of confidence or evidence that the consumer is stretching itself? I’d say a bit of both. Nonrevolving credit which is mostly student debt and car loans rose by $13.3b to a new record high of $3.04 Trillion (see below). 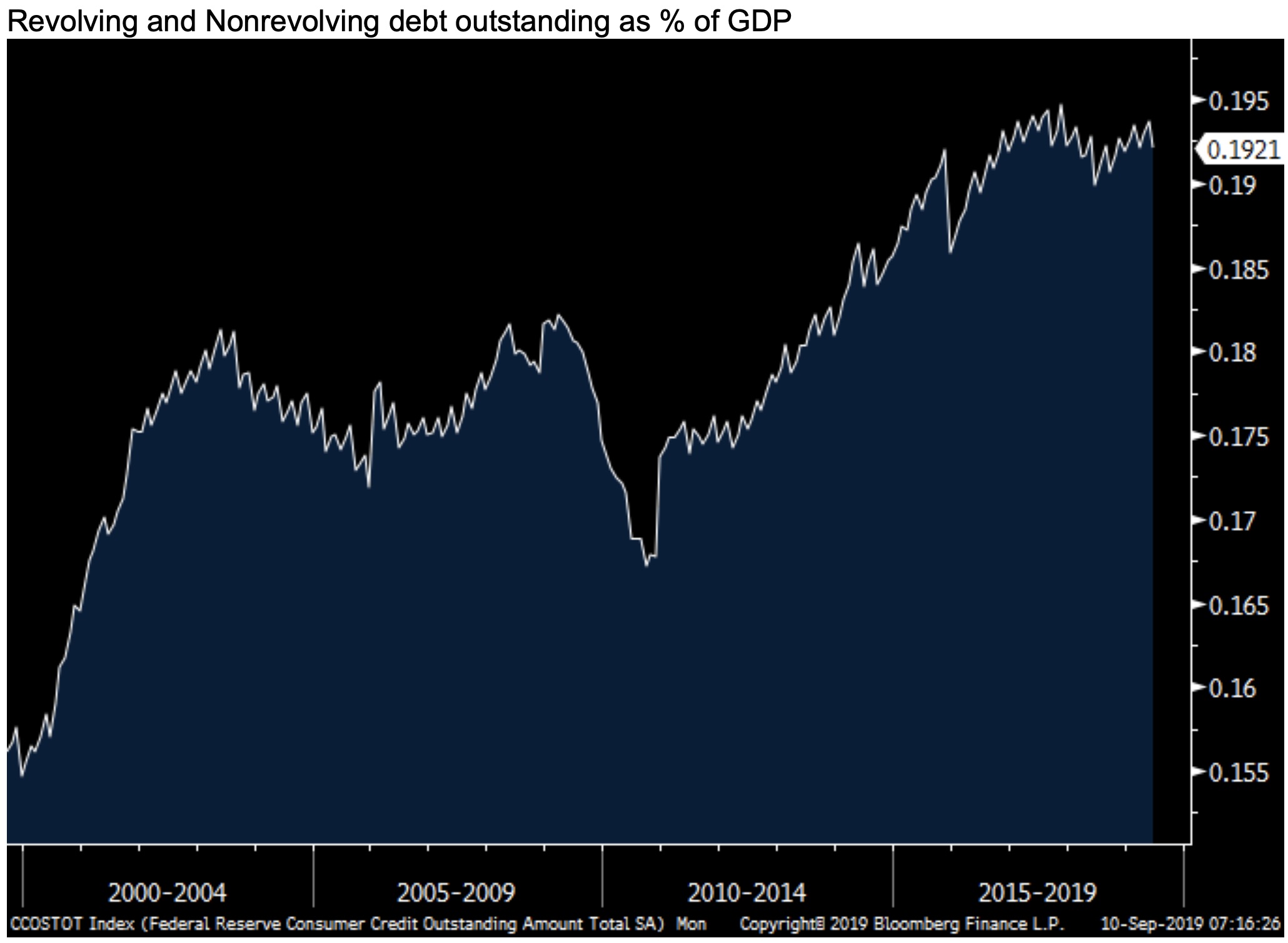 The combined increase in household debt outstanding not including mortgages in July was the 2nd most since August 2016. This all said, as a percent of GDP (I put this July number over the Q2 print ended June since we don’t have Q3 yet), it is still hovering around the same high levels over the past 3 years at about 19%.

Cheapest Money In 46 Years
…Finally, and I put this in a separate paragraph, the NFIB said “Credit conditions are about as supportive as they have ever been in the 46-year survey history.” Thus, interest rate cuts from the Fed won’t matter in terms of its stimulative purpose as rates and credit conditions are already so easy. They also said with respect to inflation, “Virtually all except the Fed will be happy with low inflation.”

Bottom line, the NFIB said the decline was more due to uncertainty (its uncertainty index was up 4 pts) rather than anything else. “In spite of the success we continue to see on Main Street, the manic predictions of recession are having a psychological effect and creating uncertainty for small business owners throughout the country,” said NFIB President and CEO Juanita D. Duggan. They didn’t use the T word in the press release, neither Trade nor Tariffs but if one is doing business where both are an impact, you can be sure that mattered a lot.

Audio interviews will resume next week on KWN
after the brief end of summer break!

Look At This Massive Multi-Decade Cup & Handle Gold Breakout! Plus Other Charts That Will Below Your Mind CLICK HERE TO READ