ALERT: Critical Update On The War In The Gold & Mining Share Markets

With continued uncertainty in the gold and silver markets, today King World News is pleased to present an important update on the war in the gold and mining shares markets from Michael Oliver at MSA. Oliver allowed KWN exclusively to share this key report with our global audience as we move through the middle of what has been an interesting January to say the least.

By Michael Oliver, MSA (Momentum Structural Analysis)
January 17 (King World News) – Annual momentum, not shown here, explained why the low occurred where it did. The drop, while devastating-looking on price charts, was merely a return to a clear support level on annual momentum.

Therefore, MSA holds its long-term bullish view on gold, signaled last February. The Issue now is the nature of the recovery from that low. What dance steps should we expect? Because it won’t continue to be a straight shot, despite the unflinching rally of the past three weeks… 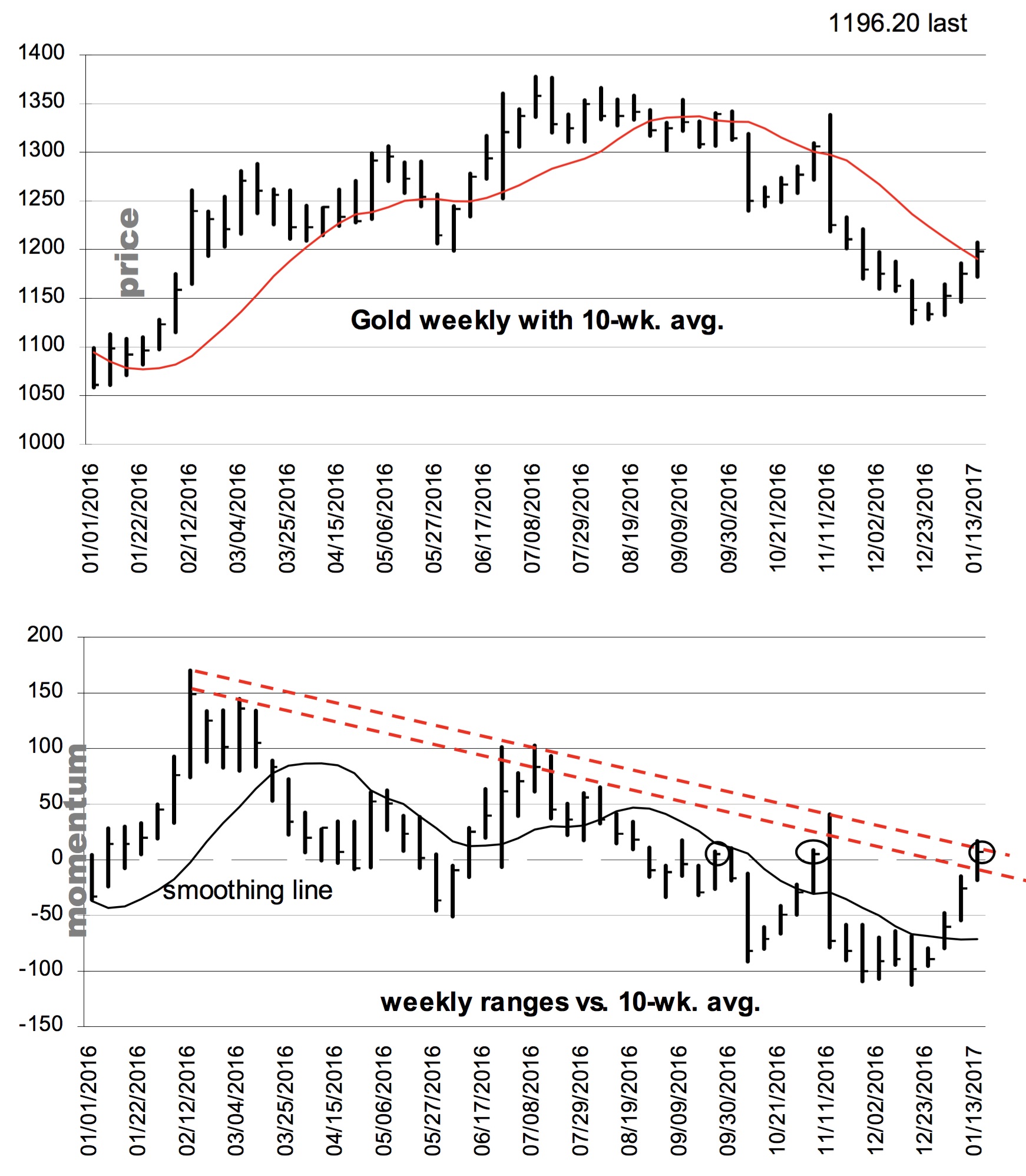 The lower is through peak weekly close readings, and that structure was exceeded last week. However, the higher trend line across intra-week momentum highs was hit last week again, for the fourth time. A ripe structure! And all the better that no similar downtrending structure can be found on price. Often the better market moves, or ambushes, come when trend change is clear for momentum but unclear for price. To close next week above the upper line would require weekly close at $1200.

Another feature is defined by the three circled closes going back to September. Those were peak weekly closes of separate momentum rallies. The first circled close was 4.7 above the 10-wk. avg./zero line, the second 3.9, and last week’s 5.9. So last week was only marginally above the two prior closes, not enough to declare breakout in our view. Pretty much aligned.

Referencing all these technical features on the intermediate trend chart, we think that a $1200 weekly close this week (or one around $1193 next week) will indicate that this aged three-wave intermediate downtrend is over and broken out fully to the upside.

Also, based on annual momentum, any monthly close credibly back above $1190 during 2017 is another indication that the sharp correction is over, and upside resuming. In sum, annual and intermediate momentum more or less agree on what they want to see in the coming weeks.

Given that gold just had a solid three-week run-up and is now dealing with these key momentum levels, it wouldn’t be surprising to see some congestion and/or pullback from last week’s high of $1207. But because of the clarity and overuse of these trend structures, we strongly suspect that any pullback or congestion is merely gold catching its breath before a breakout through these now-polished starting gates.

MSA has made the case since late 2015 that gold miners, this time around, would be the better place to be in any new gold bull trend. GDX has proven the case in two ways. Firstly, the advance from its annual momentum (not shown) breakout level last February ($15.5 to $16), noted with the arrow on pricw, more than doubled GDX by summer. 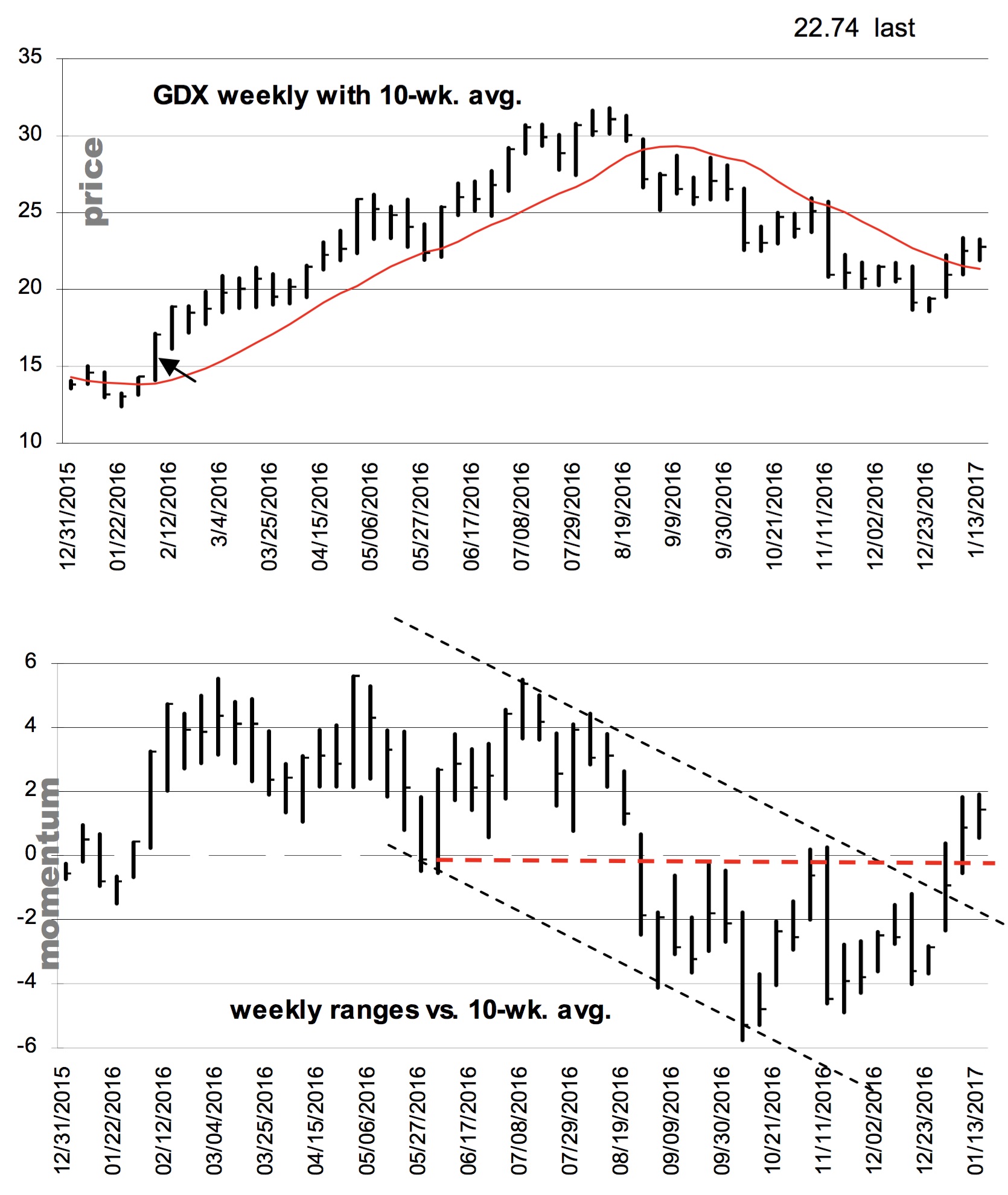 Also, its pullback, though sharp, never returned to the original MSA buy level. And now GDX’s price is 44% above the original buy level, eleven months later, despite being well off summer highs. We still hold with the assessment that gold miners are the better place to be, though gold remains the mama market and its technicals are the most important for ongoing trend assessment.

GDX’s intermediate momentum trend broke out two weeks ago. Likely best support is now down around $21.