James Turk:  “The economic outlook over here in Europe, Eric, is a lot more realistic than it is in the US. This disparity is clear from the following chart of three stock market indices: S&P 500, FTSE 100 and CAC 40. There is an eye-popping divergence between the latter two, which are rolling over, and the S&P 500, which remains in an uptrend (see chart below). 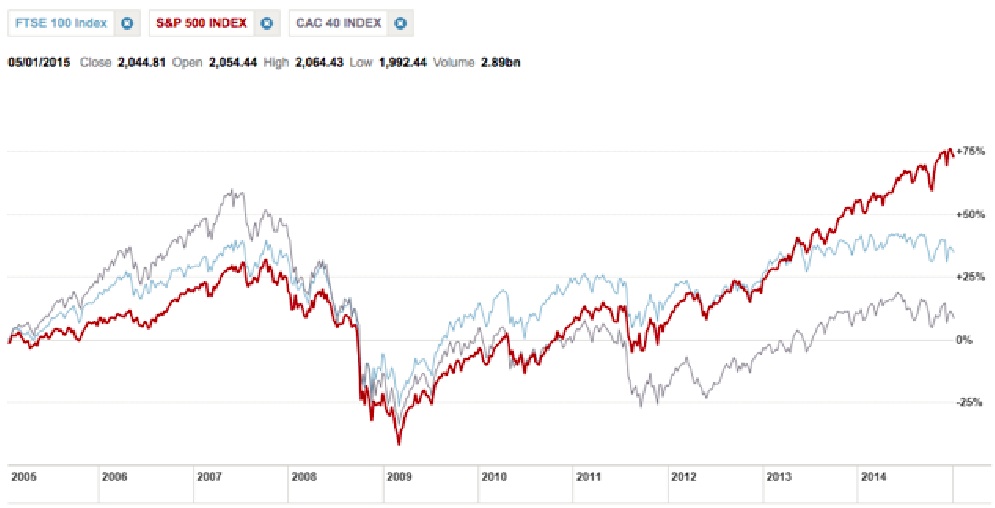 The point is that US stocks are not climbing because of good economic conditions. That won’t happen until employment improves. Despite the hype surrounding Friday’s unemployment report, the labor participation rate remains within its multi-year downtrend and fallen to nearly a 40-year low….

“So despite the 5.6% unemployment rate trumpeted by the data-magicians at the U.S. Bureau of Labor Statistics, the reality is that there are more unemployed people today than when the reported unemployment rate peaked at 10%, after the 2008 collapse. The hype of central planners is particularly apparent when you look at numbers reported by private firms such as ShadowStats.com, which calculates the unemployment rate to be 23%. With unemployment so high, it is easy to understand why the US economy is stagnant.

A healthy economy depends on people working and interacting with each other in commerce. That is not happening today in the US and most other parts of the world, particularly the welfare economies of the West. France is an example. The French economy is weak, which is confirmed by the somewhat realistic report prepared by its government bureaucrats showing that its unemployment rate is 10.4%.

So if the economies of the US and Europe are basically stagnant and not really much different, what explains the divergence between the stock market indices in the above chart? I believe it's two things: First, the US stock market has been buoyed by Fed money printing. We know the Fed has been doing this because its balance sheet is right at its record high of $4.5 trillion, which contrasts with the European Central Bank. Despite all the rhetoric from Mr Draghi about buying government debt and transforming it into euro currency, the ECB’s balance sheet has been shrinking.

This conundrum is a clear example of the results of central planning. There are unintended consequences. So the US dollar exchange rate is rising, when historical experience and logic says it should be falling. But this conundrum actually gives us the second reason that explains the divergence in the above chart.

Massive amounts of hot money have been flowing out of Europe – and other parts of the world too for that matter – into the US dollar. And this hot money is not left in banks or used to purchase US Treasuries at zero percent interest. This hot money is flowing into the US stock market, which brings me to the important point about the above chart.

Basically, the world faces two alternative futures. In one, the S&P is painting a picture of money printing, with more QE. Stock markets always rise when a currency is headed toward hyperinflation. As the dollar is debased by the Fed’s transforming more government debt into yet more dollar currency, money will flow into tangibles like gold, causing its price to climb. Prices will also rise for near-tangibles like the equities of gold mining companies, other commodity producers, and companies that own valuable tangible assets.

In contrast, the FTSE and CAC are painting a picture that is leading to a 1930s-style deflation with stocks falling. As economies round the world slid into the Great Depression, people wanted to hold money, not stocks. And of course the best money to hold in the 1930s was gold.

So regardless which way you look at it, Eric, in my view gold is the best place to be in 2015. Regardless of which way the divergence in the above chart is resolved, expect gold to be a winner. In fact, I am expecting a spectacular year for gold and silver.”