With investors around the world wondering what’s next after violent trading to start the year, here is a special report that was just released on what to expect next for gold.

Gold Market Recovering From March Dislocations
April 8 (King World News) – This is just a portion of a very important report on the gold market from Jason Geopfert at SentimenTrader:  “More recently, traders have been putting a higher price on near-term gold futures than the contract that goes out six months. This has been highly unusual over the past 40 years. (See below).

HIGHLY UNUSUAL OVER THE PAST 40 YEARS:
Gold Goes Into Backwardation 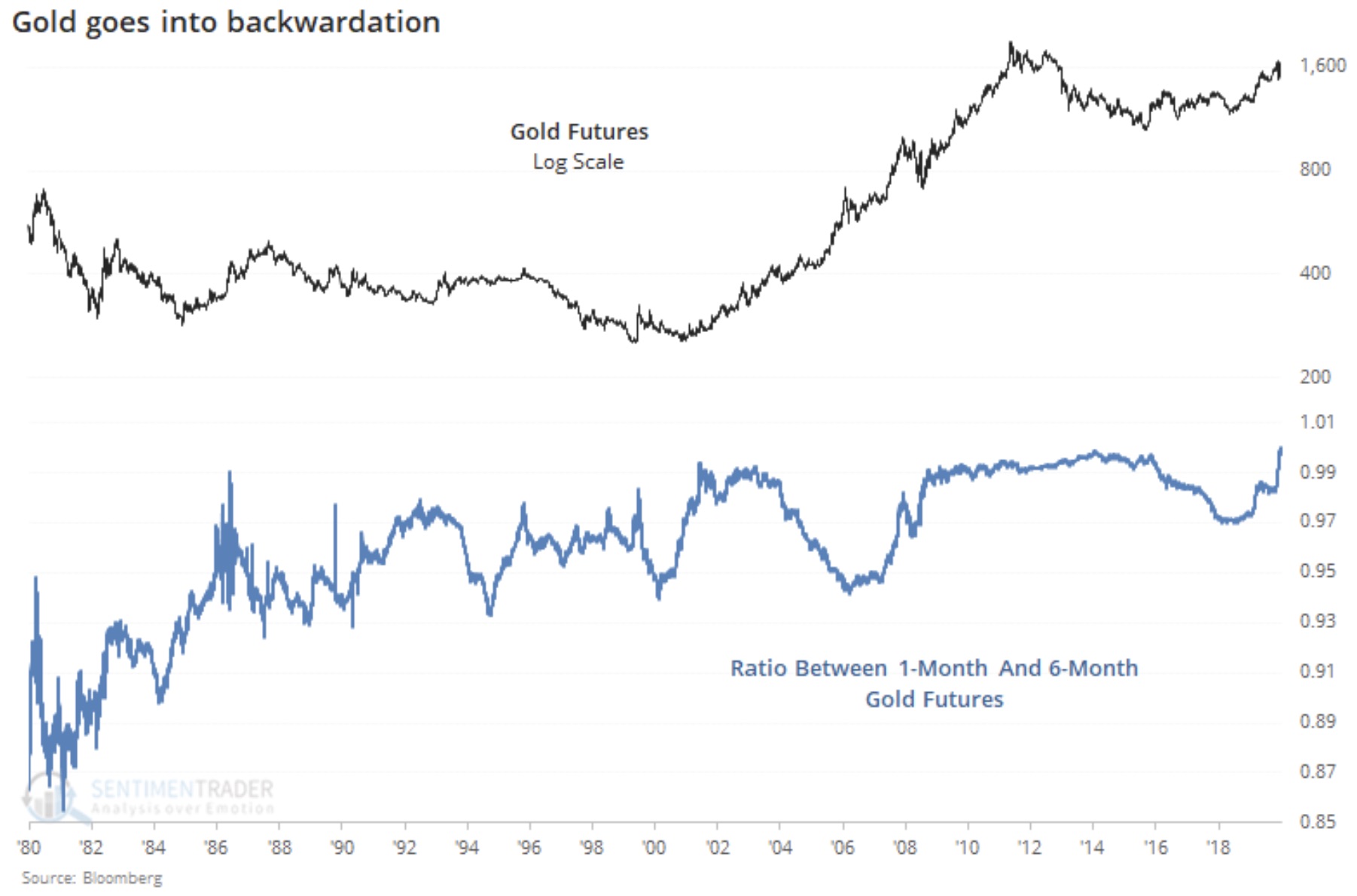 Looking at more recent years, it has been a mixed sign. While it was the case during the late run-up in 2009-12, it persisted while gold melted down after that peak. Very generally, a term structure like this would be considered a positive sign going forward. (See below). 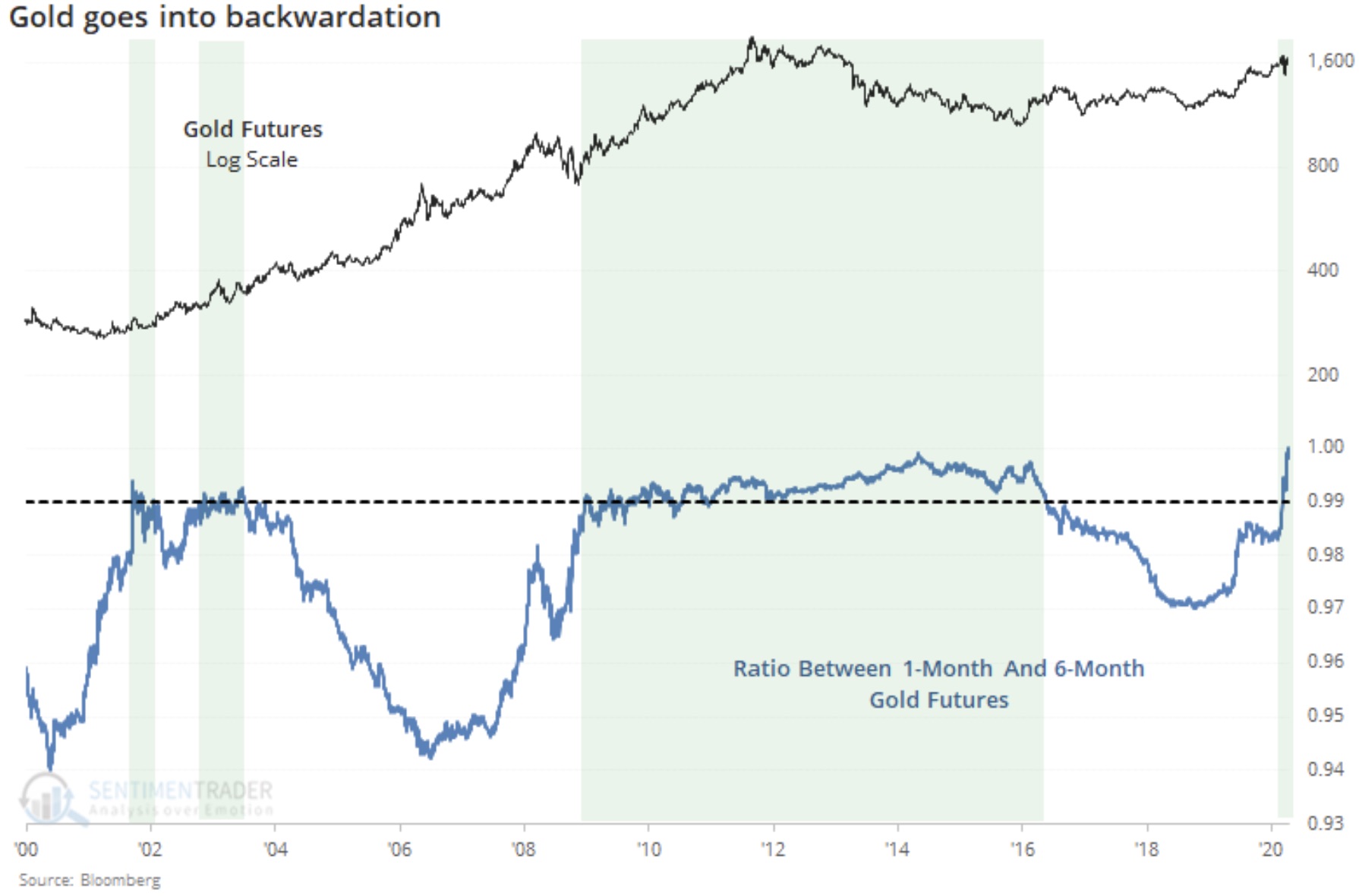 Large speculators have been scrambling to sell gold futures in recent weeks as the contract suffered volatility. (See below). 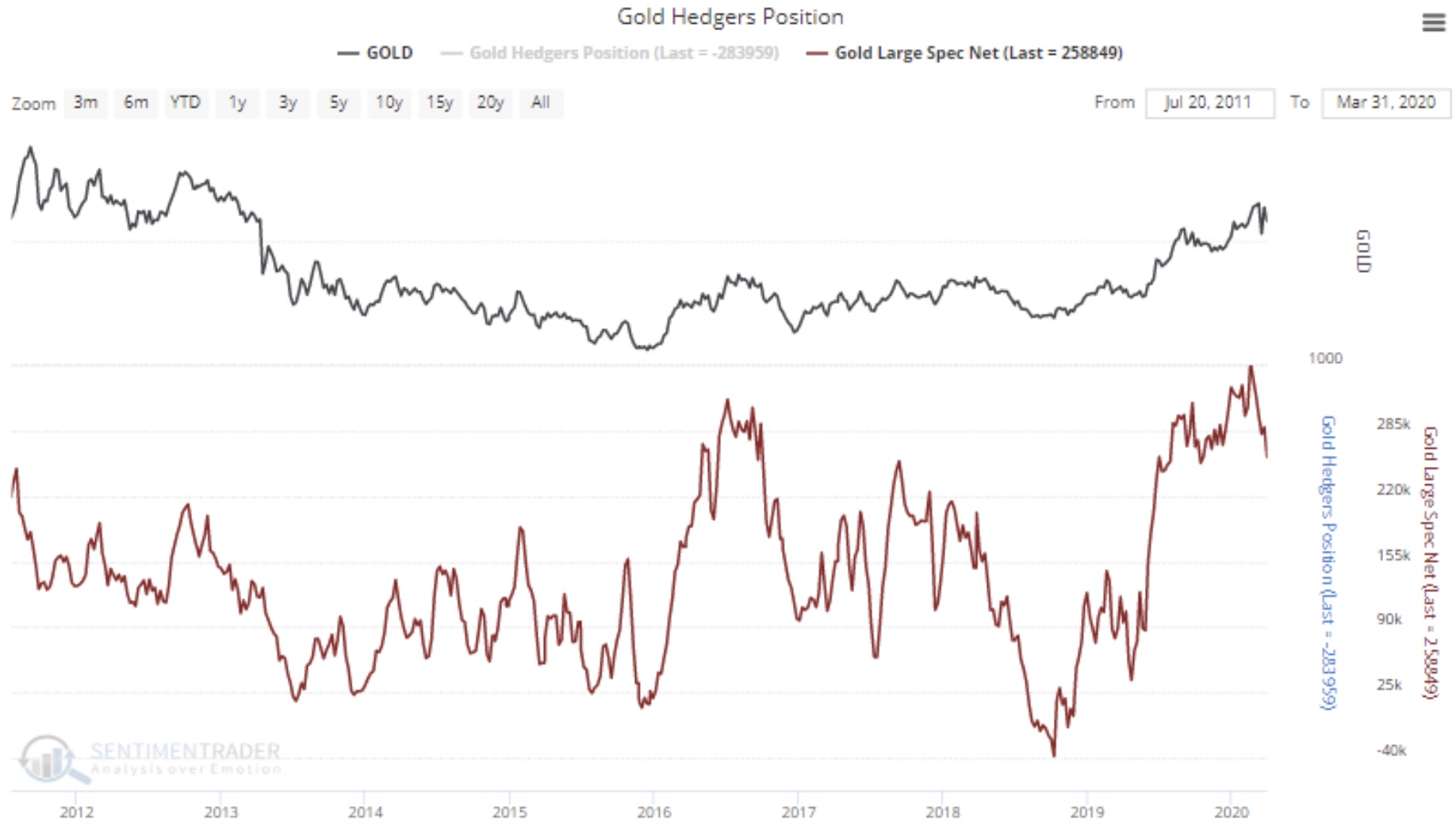 Even though speculators have sold some of their long positions, overall open interest in gold futures is plunging. Low open interest is usually a sign of apathy and good for future returns, but it’s coming off a record high, so a mixed picture there. (See below). 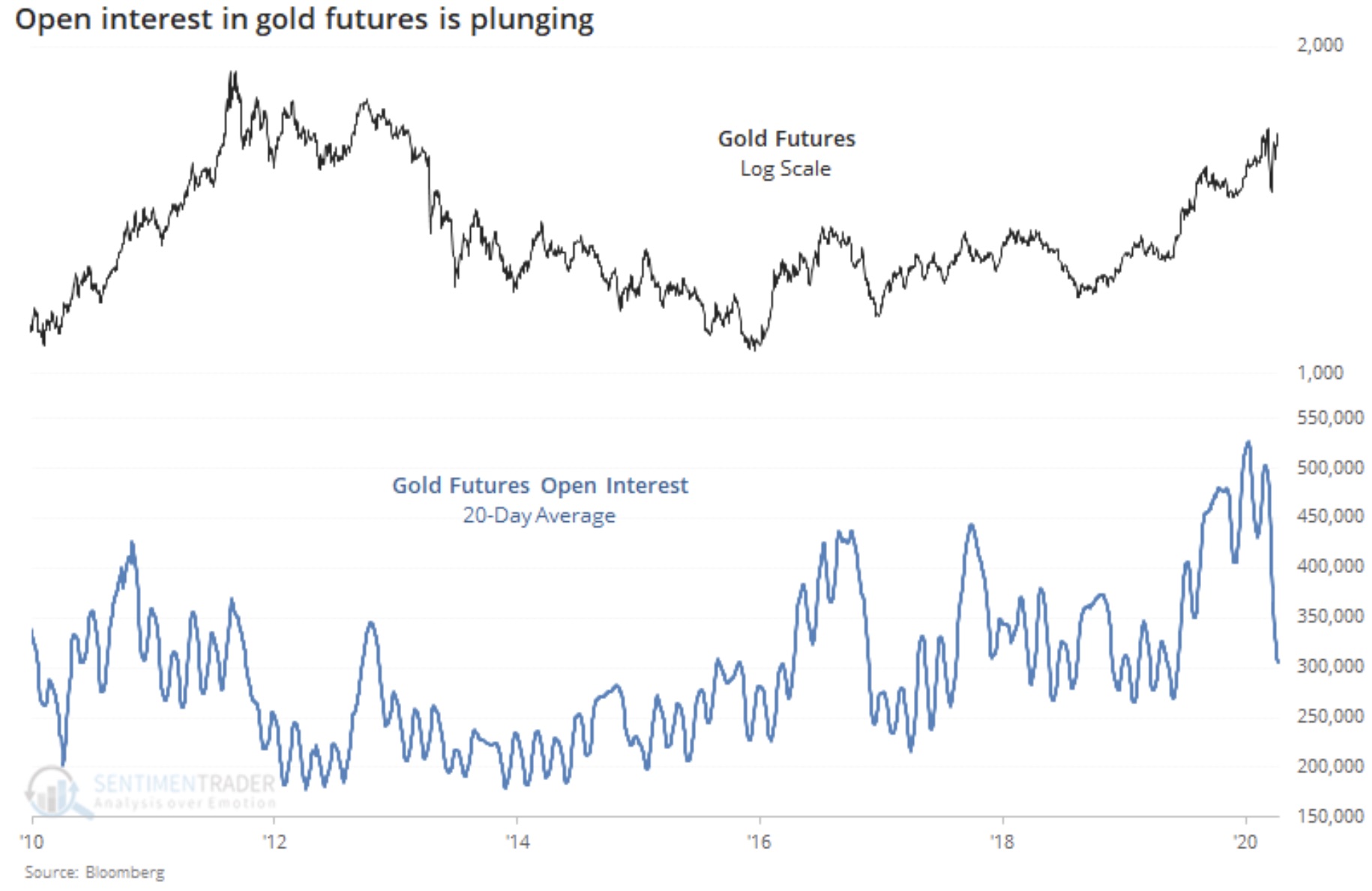 That means their net position as a percentage of open interest has continued to climb as is now at a record high. This is not good. (See below). 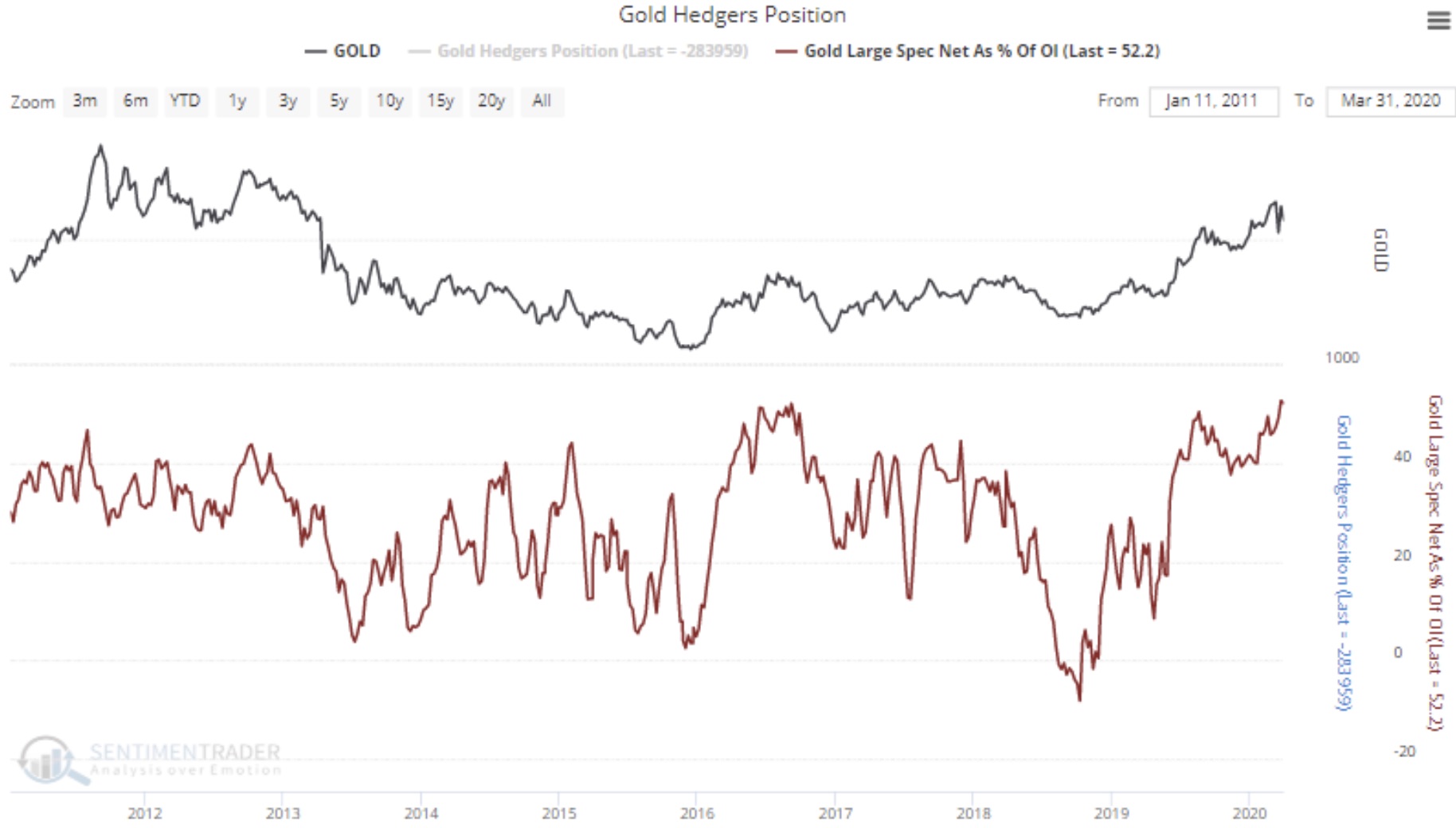 For gold itself, the overall Optimism Index, which incorporates many of these measures, recently hit 78%, after which it has been tough for gold to maintain upside momentum in recent years. (See below).

Optimism On Gold Is Very High 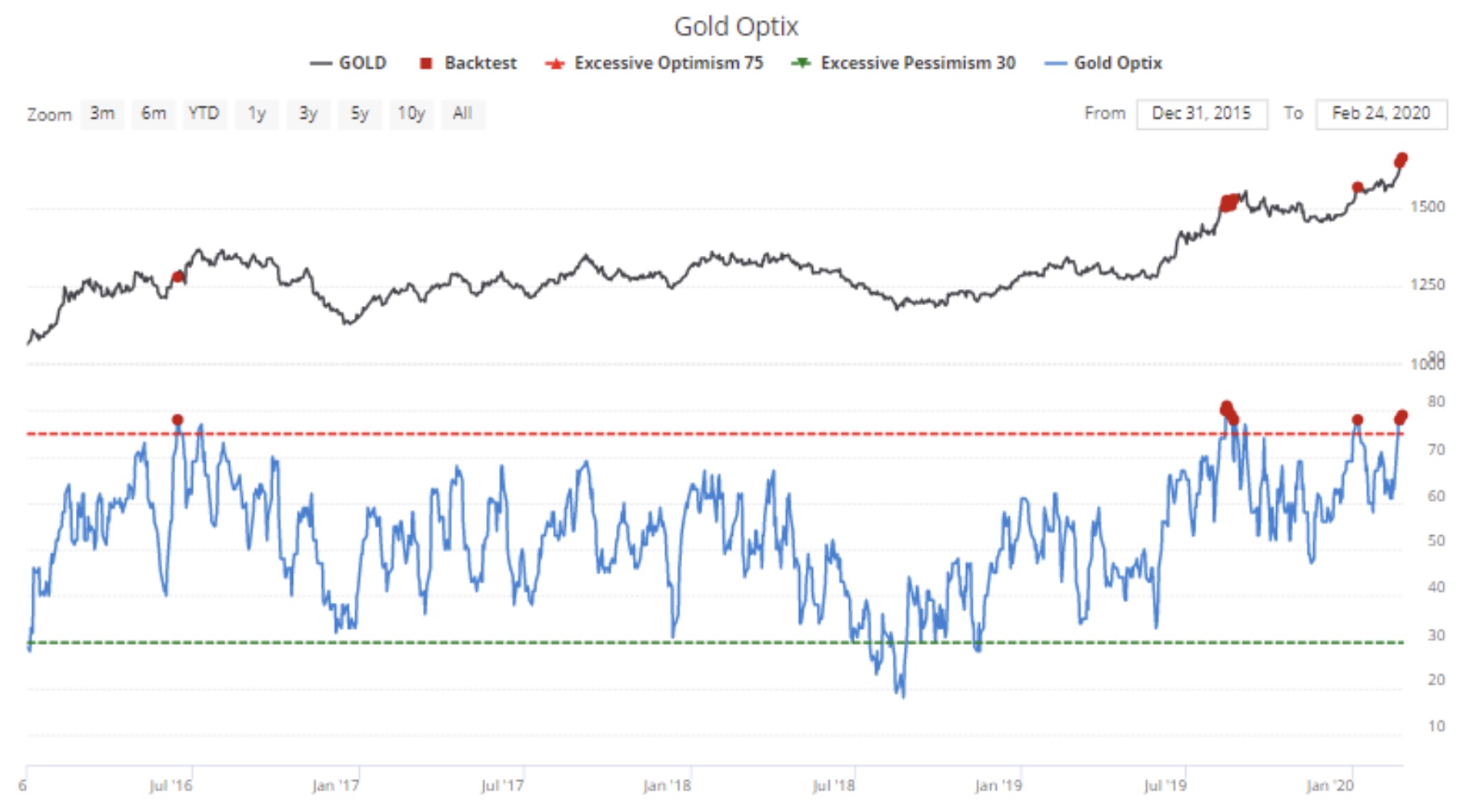 Since the most optimism is usually seen during bull markets, some of the highest readings occurred in the mid-2000s, so future returns weren’t terrible…they weren’t great, either. Essentially flat over the next few months according to the Backtest Engine. (See below). 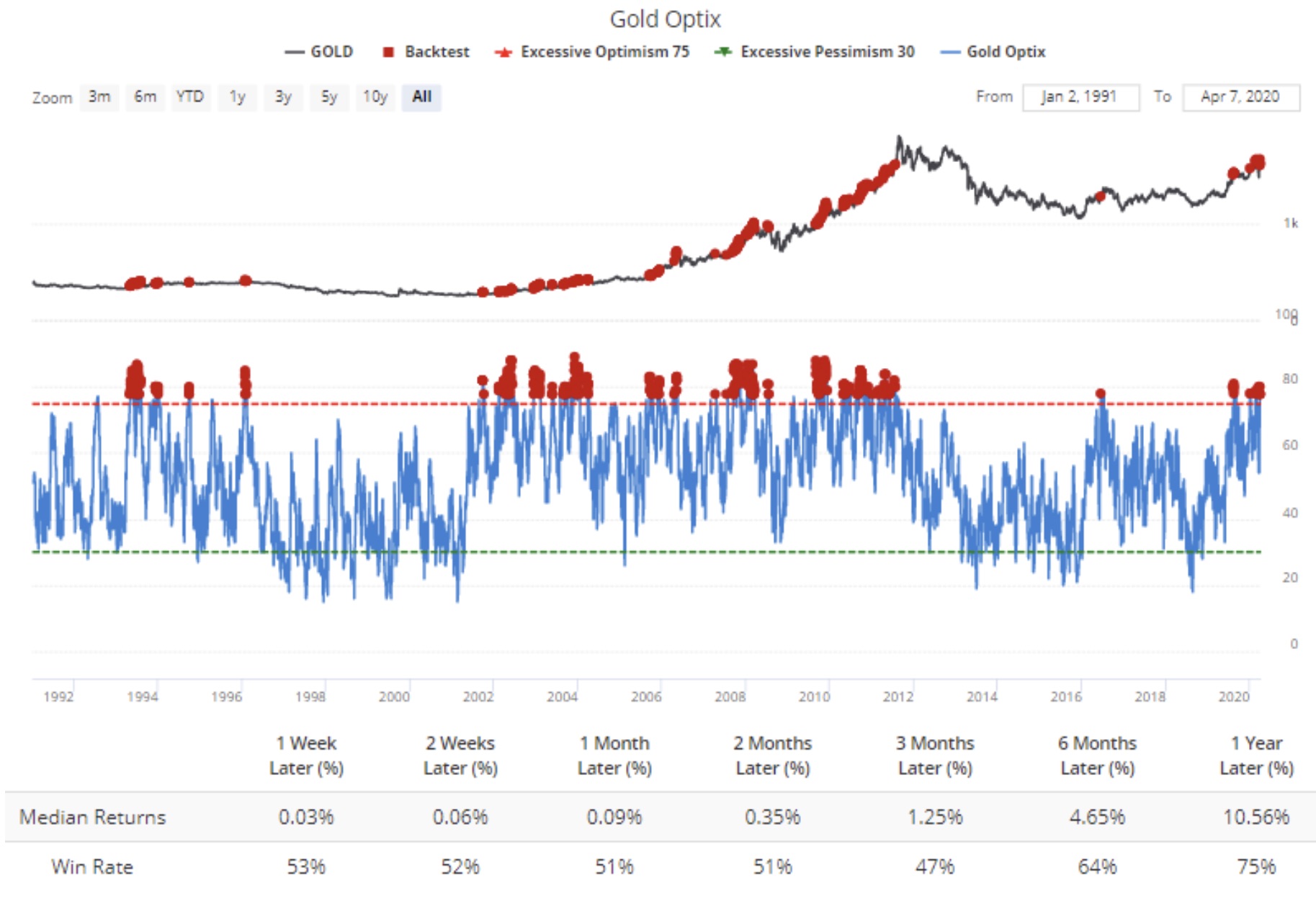 The most comprehensive of these metrics is the Optimism Index, and it’s still at a high level, which has preceded flat returns over the short- to medium-term, even during the roaring 2000s bull market. That’s the biggest knock against the metal right now. The dislocation in March temporarily triggered some near-panic readings, but those have quickly evaporated, and didn’t usually give strong signals anyway. The surge of ETF flows and massive long position by speculators are other worries.

Overall, there isn’t much of anything to suggest an edge for long positions, and if anything it would tilt to the negative side. The biggest factor is what investors feel will happen with growth and inflation once we get through the pandemic, and that has the potential to swamp any other technical, fundamental, or behavioral factors. So far, there isn’t a strong sign that the metal is immune to these factors (it still hasn’t been able to rally strongly in the face of excessive optimism), but it’s something to watch for in the coming weeks.” To read the entire gold report simply subscribe to the internationally acclaimed work that Jason Goepfert produces at SentimenTrader by CLICKING HERE.

Connect The Dots
***Also Released: Gold May Be Ready To Launch, Plus Another Day Another Amazing Stat CLICK HERE.

Bullion Bank Troubles
To hear James Turk discuss what the corrupt bullion banks are up to in the gold and silver markets and much more CLICK HERE OR ON THE IMAGE BELOW.