With the Nasdaq tumbling once again, along with the U.S. dollar and bonds, will this be the big surprise of 2017?

Gold and Stocks
By Ronald-Peter Stoeferle, Incrementum AG Liechtenstein
June 29 (King World News) – In the following section, we want to take a closer look at the relationship between gold and the stock market. We have already pointed out in previous reports that a rising US stock market does as a rule not represent a positive environment for the gold price. Below we want to focus specifically on the volatility of the correlation between gold and the S&P 500 Index, as well as the performance of gold during bear markets in stocks.

To begin with, here is the three-year rolling correlation132 between gold and the S&P 500 Index Index. 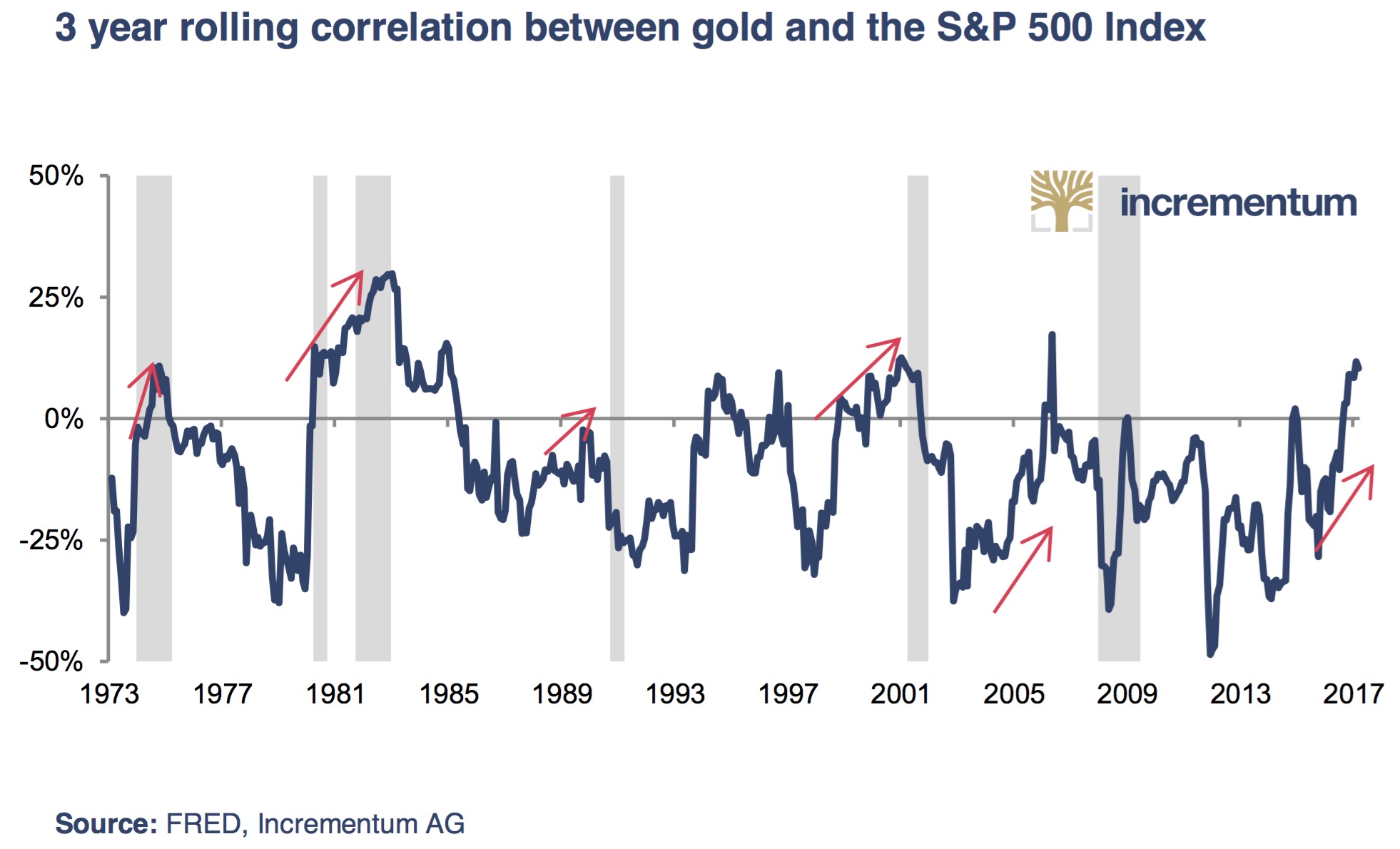 The chart illustrates that the three-year rolling correlation between gold and the S&P 500 Index (SPX) is subject to considerable fluctuations over time and does not follow a uniform trend. However, it can also be discerned that prior to recessions (marked by gray bars on the chart), the correlation tends to become tighter. Usually, a local maximum is reached during the recession period…

Awareness of this fact can be very helpful in evaluating a given situation, as gold and the SPX regularly tend to exhibit a weak, but closer correlation just before recessions begin. At the beginning of 2017 we can once again detect a local maximum that has gone hand in hand with very weak US GDP growth.

The table shows that in periods of SPX drawdowns exceeding 20%, gold has in the past tended to move in the opposite direction, often rallying quite significantly. The only exception was the period of November 1980 to July 1982. The performance of the US dollar is quite interesting in this context as well. Let us look more closely at the individual time periods:

● From December 1972 until September 1974, the after-shocks of the demise of the Bretton-Woods system continued to have a significant impact, leading to a veritable price explosion in gold and a notable devaluation of the dollar index.

● In the stock bear market from November 1980 to July 1982 the dollar by contrast rallied substantially, while gold was dumped rather indiscriminately. This move was however largely due to the contingent circumstances prevailing at the time. Not only did the gold price come off a major blow-off peak it reached in 1980, partly driven by fears of price inflation, but also by a major panic over geopolitical developments (the Soviet invasion of Afghanistan and the Iranian revolution), but Paul Volcker continued the restrictive monetary policy begun by his predecessor in order to restore faith in the US dollar. This put pressure on the gold price, which was clearly overvalued at the time. By 1980, growth in the true US money supply had been trending down for more than three years, and in 1981 it even turned briefly negative (by a barely perceptible low amount of slightly more than 1%) – which was only the second time in the history of the Fed when the central bank deliberately pushed money supply growth into negative territory, however briefly. Just one year later, in 1982, true money supply growth exploded again, by an until then unheard-of rate of 50% year-on-year. Paul Volcker pursued a tight monetary policy for precisely as long as it took to bring inflation expectations down – as soon as that goal was achieved, the spigot was opened wide again.

● The situation around the Black Monday was different – it was accompanied by a weakening dollar, while gold was able to generate a significant gain of 14.5%.

● The demise of the “New Economy” mania and the financial market crisis of 2008 were characterized by a strengthening US dollar and a concurrent rally in gold prices, whereby it is worth stressing that the performance of the gold price far exceeded the appreciation of the US dollar (note that there was considerable short term volatility in evidence, particularly in 2008, with gold initially selling off at the height of the panic. As mentioned further above, it served as a source of liquidity. Moreover, its price was pressured by a bout of forced liquidation of futures positions held by hedge funds that faced margin calls in unrelated positions in other markets).

Conclusion
In conclusion, it can be stated that gold is eminently suitable as a hedge when the stock market comes under pressure, as it does as a rule offset stock market declines quite smartly. Localized crisis situations, which affect the US only indirectly, by contrast tend to lead to strength in the US dollar. This also tends to apply in global crises, when investors prefer to shift funds into safe haven assets, however, in such situations gold tends to markedly outperform the US dollar, as inter alia demonstrated quite clearly by the financial market crisis of 2008-2009. Ultimately this has to do with the fact that the dollar is nothing but a fiat currency. When push comes to shove, it cannot be ruled out that market participants will lose confidence in its qualities as a medium of exchange and a store of value. Once this confidence is lost, paper money has a habit of returning to its true value, which is to say, the value generally accorded to pieces of paper with some ink slapped on them.