The US dollar and gold are on the move today, plus a look at what else is happening around the world.

US Dollar And Gold On The Move
August 1 (King World News) – Peter Boockvar:  Now that central banks outside of the Fed have picked up the pace of their monetary tightening, including the ECB, the US dollar has topped out for now. So, was the large dollar rally over the past year just an interest rate differential thing with an aggressive Fed relative to others? At least for now it seems to be the case. The euro and yen heavy DXY is at a one month low while the yen itself is at a 2 month high all of a sudden. Gold in turn is at a one month high.

US Dollar Index Pull Back Continues 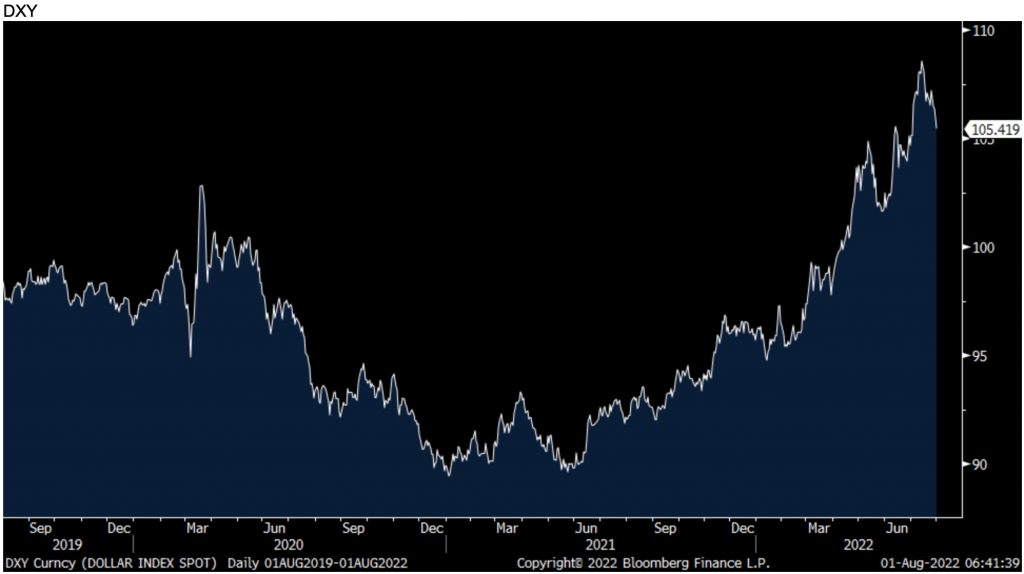 Not so fast though on the belief that the Fed is almost done raising rates says former NY Fed president Bill Dudley and now playing the role of monetary critic and truth teller. In a Bloomberg opinion piece today he said:

All told, the outlook hasn’t changed. Inflation is too high, the labor market is too tight and the Fed must respond – most likely by pushing the economy into an actual recession, as opposed to the two quarters of minor GDP shrinkage that has occurred so far. Wishful thinking in markets only makes the job harder, by loosening financial conditions and requiring more monetary tightening to compensate.”

Dudley then went on to say. The most lagging of economic indicators, the unemployment rate, has now become again the most important monthly data point, along with CPI, because it will be that rather than GDP that will more influence how much tightening the Fed has left in them. That said, and to say again, even if the Fed was done in September or soon after in raising rates, QT is doubling in size…

As for how much these interest rate increases are going to cost us, us being the federal government, my friend Luke Groman in his weekly Forest For the Trees had this interesting back of the envelope calculation.

and would be 14% if the government saw a 20% drop in tax receipts that usually accompanies a typical US recession.

Overseas
… there were a bunch of PMI’s seen overseas. China’s state sector composite index fell .5 pt to 52.4 with both components down m/o/m. Its private sector one saw manufacturing down 1 pt from June to just above 50 at 50.3. Caixin said “overall growth momentum softened since June amid slower upturns in output and total new work. Relatively subdued demand conditions and efforts to contain costs led to another decline in employment, while firms were able to further reduce backlogs of work. Cost pressures meanwhile eased notably on the month, with average input costs rising at the weakest rate since last December, while prices charged were cut for the 3rd month running.” The estimate was 51. Industrial metals prices in response are mixed but overall little changed.

The other really important industrial powerhouse in the region, South Korea, saw its PMI fall below 50 at 49.8 from 51.3. Markit said “Sustained price and supply pressures continued to hinder the South Korean manufacturing sector at the start of the 3rd quarter of 2022. Output volumes fell at the fastest pace for 9 months as manufacturers continued to report that material shortages and rising costs had impacted demand in the sector and placed additional strains on capacity.” Also, new orders fell below 50 for the first time since September 2020 and business confidence fell to the lowest since October 2021. The hope here too is that inflation pressures are peaking as “delivery times lengthened at the 2nd softest rate for almost a year.”…

The July Eurozone manufacturing PMI was revised up to 49.8 from the initial print of 49.6 but still down from 52.1 in June and 54.6 in May. Markit said “The downturn strengthened amid a reduction in new orders which, aside from those seen during the pandemic restrictions, was the sharpest since the Eurozone sovereign debt crisis in 2012 as steep inflation squeezed demand.” The UK manufacturing PMI was revised to 52.1 from 52.2 initially and down from 52.8 in June and 54.6 in May.

Market wise today in Europe, the Italian 10 yr yield is tightening its spread vs the German 10 yr yield as we await some resolution on the political situation in Italy at the same time Germany in particular is suffering profoundly from high natural gas prices. 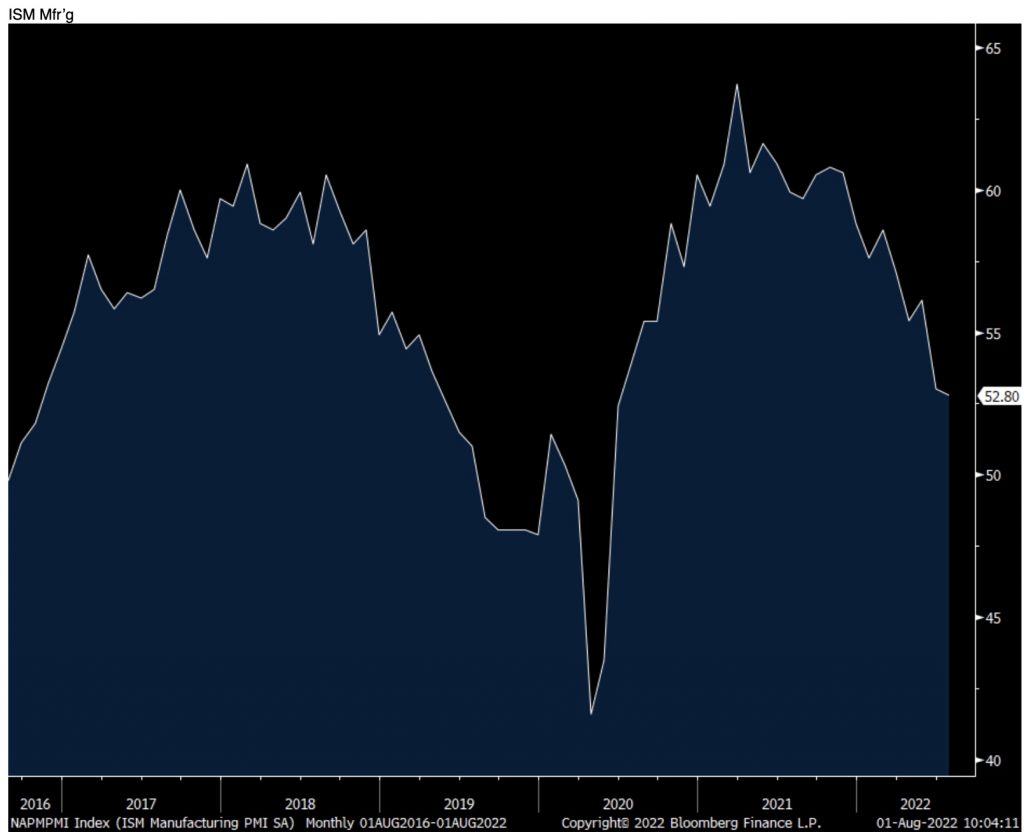 New orders fell to 48 and now is below 50 for a 2nd month. Backlogs were lower too, by 1.9 pts to 51.3, the lowest since June 2020. At the same time orders and backlogs are slipping, inventories are rising, both at the manufacturer level and for customers. For the former, inventories rose to 57.3 from 56 and that is the most since 1984.

Inventories Rise To Highest Level Since 1984 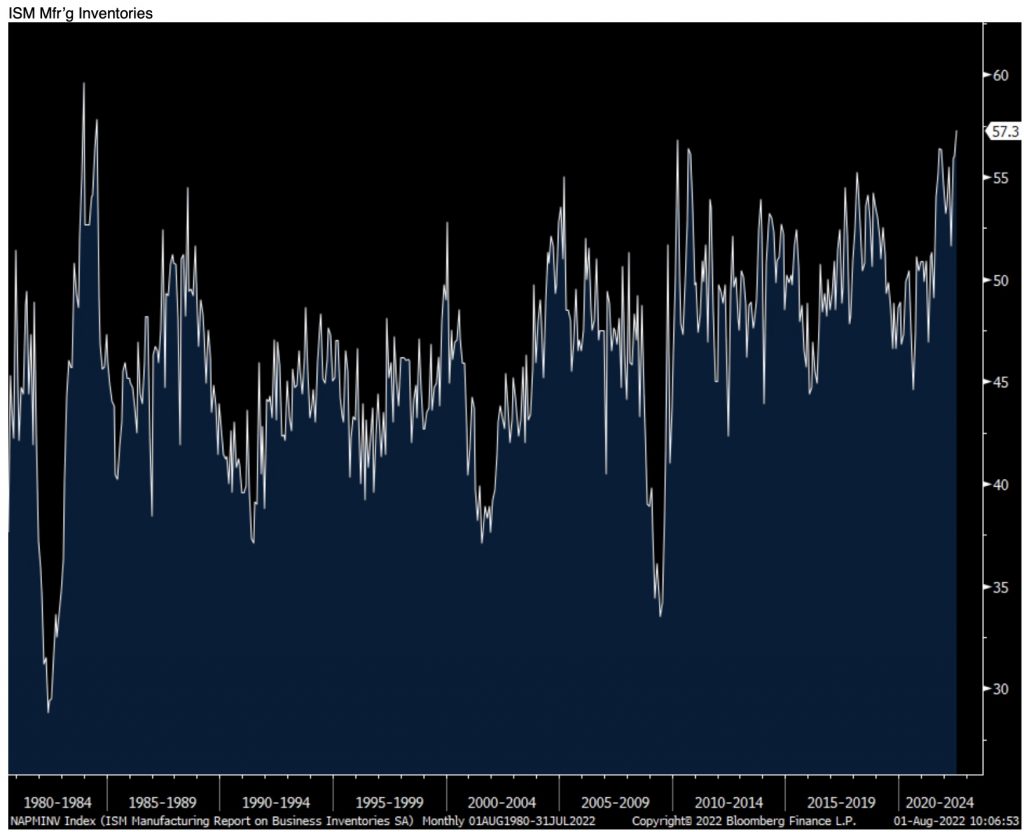 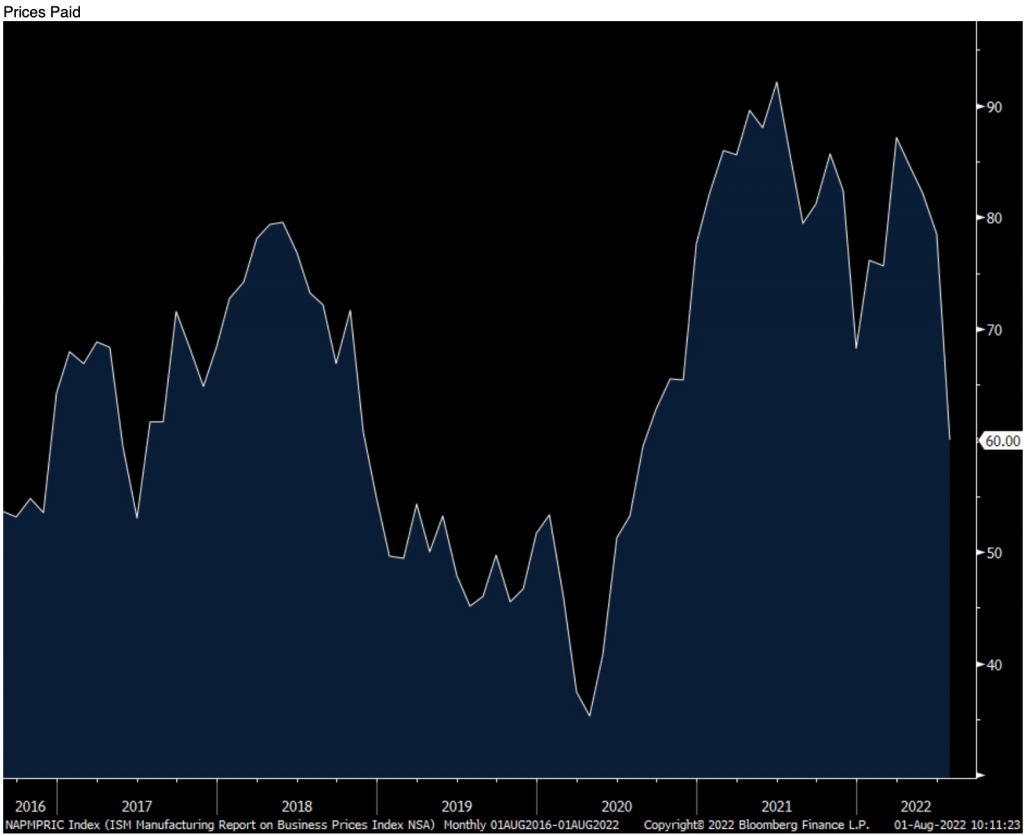 While the headline figure was barely down, the breadth deteriorated as only 11 industries of 18 surveyed saw growth vs 15 in the two prior months and 17 in April.

ISM said “There are signs of new order rates softening – cited in 16% of general comments, compared with 17% in June – as panelists are increasingly concerned about excessive inventories and continuing record high lead times. Employment activity remained strongly positive in spite of the uncertainty with new order rates.” I’ll add this, as we all watch the employment data now, a reminder is that it ALWAYS lags as companies don’t just start firing people on the signs of a slowdown. They first slow hiring. Now that said, the ISM is still claiming that the below 50 employment figures have more to do with labor supply challenges rather than the demand for them. Initial jobless claims at an 8 month high is beginning to say otherwise.

As for the economic implications of the data, it only points to further slowing in manufacturing in the 2nd half of 2022 as the spending hangover on goods over the past two years has us with now too much inventory in certain areas as companies assumed too much that covid trends would continue.

It’s encouraging to see the easing of supply pressures and the drop in prices paid but it’s the high inflation induced economic growth slowdown itself that is the cause as this is how the economic cycle works.

ALSO RELEASED: The Great Recession Is Upon Us And It Will Impact Gold, Interest Rates And The US Dollar CLICK HERE.
ALSO RELEASED: Michael Oliver – Gold Market Now Close To Unleashing Major Upside Target CLICK HERE.