With the Dow near 21,000 and gold trading above $1,260, this will be the moment in which gold will begin to shine again.

Gold To Shine Again
By Ronald-Peter Stoeferle, Incrementum AG Liechtenstein
June 1 (King World News) – We live in an age of advanced monetary surrealism. In Q1 2017 alone, the largest central banks created the equivalent of almost USD 1,000 bn. worth of central bank money ex nihilo. Naturally the fresh currency was not used to fund philanthropic projects but to purchase financial securities. Although this ongoing liquidity supernova has temporarily created an uneasy calm in financial markets, we are strongly convinced that the real costs of this monetary madness will reveal themselves down the line. 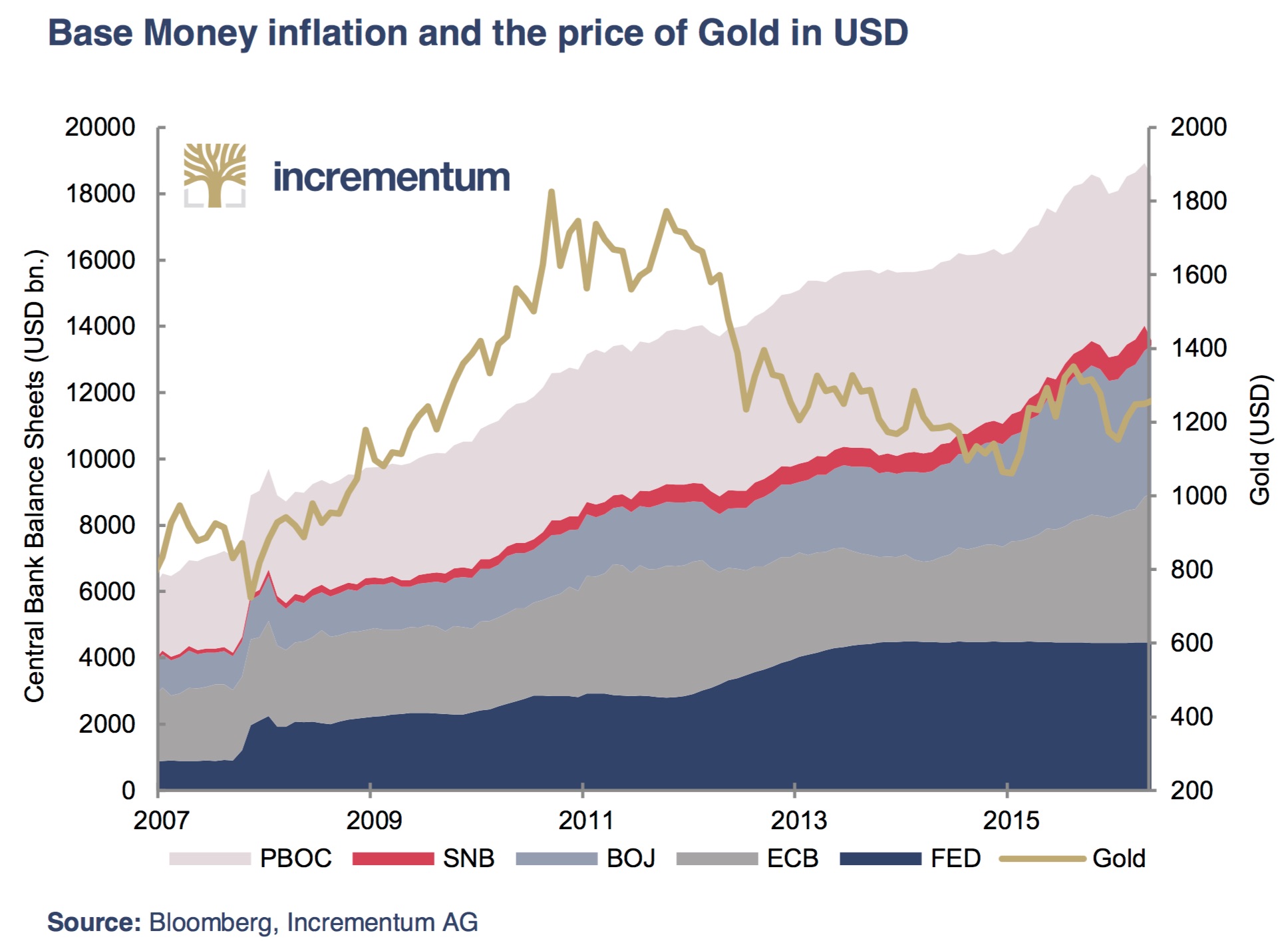 We believe that the monetary tsunami created in the past years, consisting of a flood of central bank money and new debt, has created a dangerous illusion: the illusion of a carefree present at the expense of a fragile future. The frivolity displayed by many investors is for example reflected by record-low volatility in equities, which have acquired the nimbus of being without alternative, and is also highlighted by the minimal spreads on corporate and government bonds.

Almost a decade of zero and negative interest rates has atomised any form of risk aversion. While the quantitative easing programmes are still going at full throttle in many places without the media paying much attention, the situation in the USA looks decidedly different: seven years after the Fed funds rate had been set to zero, the first interest rate hike by the Federal Reserve in December 2015 marked the end of the longest period of immobility in terms of interest rate policy in history. To many market participants, this overdue step towards normalising the monetary policy is the confirmation of the much-desired comeback of the US economy…

However, the interest rate reversal that had been announced for years got off to a sluggish start. Market participants became increasingly nervous in 2016 when it started turning out that central banks would not be remotely able to stick to the speed of four interest rate hikes as announced. After the FOMC meeting in March 2016, the first question that CNBC journalist Steve Liesman asked Janet Yellen was:

“Does the Fed have a credibility problem […]?”

We believe that the absence of the often-quoted sustainable economic recovery is one factor to blame for the passivity of the Fed. The depreciation of the Chinese currency and the still falling yields at the long end of the yield curve in 2016 are two others, as a result of which the Fed had to procrastinate until December 2016. 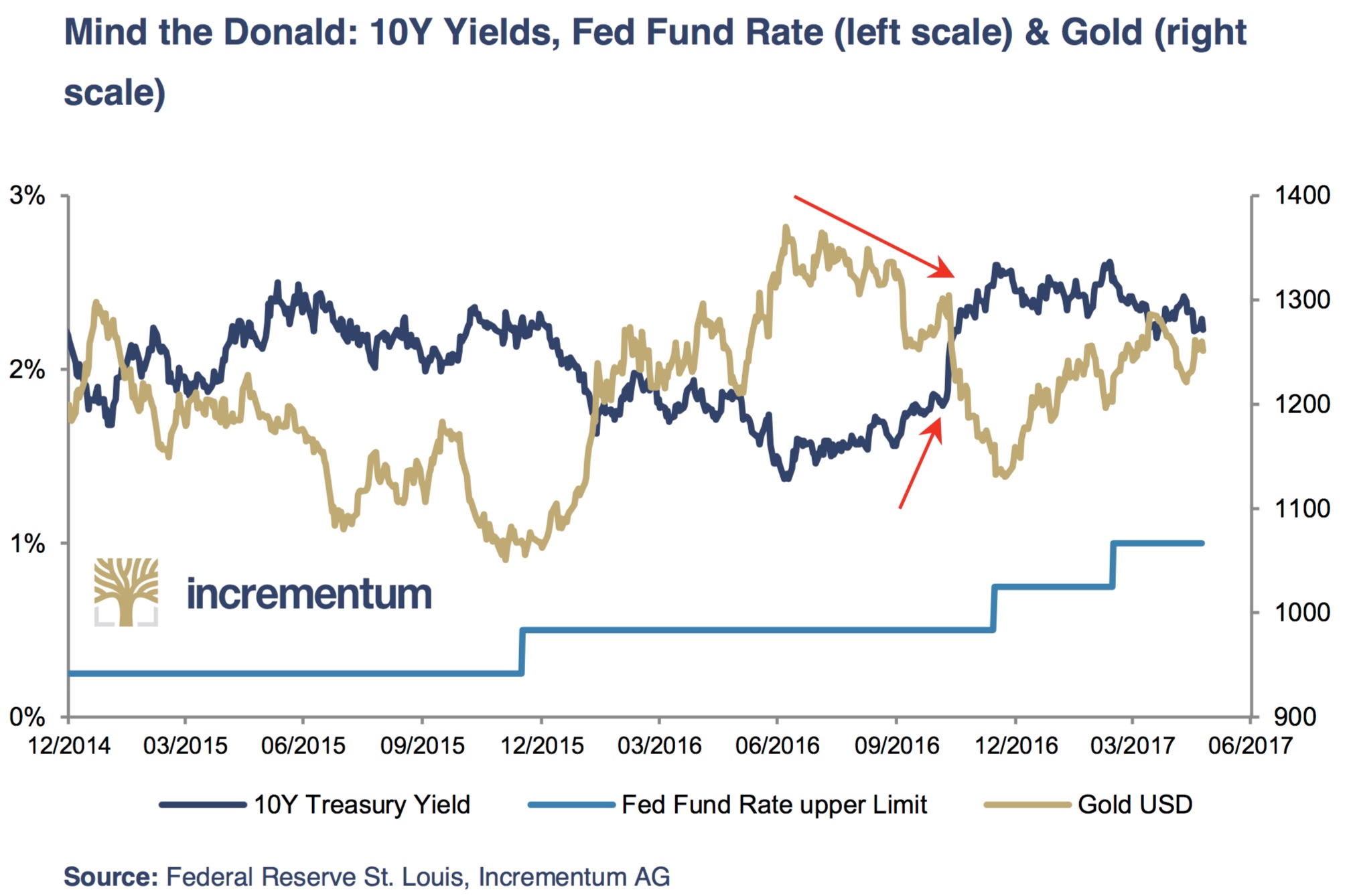 The gold price celebrated a remarkable comeback during this hesitant phase of the Fed. Last year we confidently opened the “In Gold We Trust” report with the line “Gold is back!”. We had anticipated the passivity of the Fed as well as the return of the bull market. The gold price seemed to have experienced a sustainable trend reversal in USD, and we felt our bullish stance had just been confirmed.

But our gold(en) optimism was stopped in its tracks again in autumn 2016. The gold price declined significantly, in particular in the last quarter of 2016, even though the maximum drawdown has never exceeded 20%. We can therefore still call the status quo a correction within the confines of a new bull market, but we want to openly admit that we had not foreseen the dent in the gold price performance. Our target price of USD 2,300 for June 2018 may therefore prove overly optimistic. But what was the trigger of the sudden reverse thrust of the gold price?

Ironically, it was Donald J. Trump. The election of the presidential candidate originally unloved by Wall Street fuelled hopes of a renaissance of America on the basis of a nationalistic growth policy. President Trump brought about a change in sentiment, especially among a class of society that had lost its trust in the economic system and political institutions. Stocks received another boost, and the increase in the gold price was (temporarily) halted…

The Fed seems to be keen to use the new euphoria on the markets in order to push the normalisation of monetary policy. Even if the journalistic mainstream is abundantly convinced of the sustainability of the US interest rate reversal, a contradiction is embedded in the narrative of the economic upswing triggered by Trump: if the economic development, as claimed by the Fed in the past years, was actually rosy even prior to Trump’s victory, the candidate promising in his central message to make America great AGAIN would presumably not have won. The narrative of a recovering US economy is the basis of the bull market in equities.

The valuation level of the US equity market is nowadays ambitious, to put it mildly – both in absolute numbers and in terms of the economic output. This prompts the conclusion that the U.S. is caught up for the third time within two decades in an illusionary bubble economy created by money supply inflation and equipped with an expiry date. In comparison with the earlier two bubbles, however, the excess is not limited to certain sectors (technology in 2000, credit in 2008), but it is omnipresent and includes various asset classes, especially also bonds and (again) property. In view of the current situation, the renowned analyst Jesse Felder rightly talks about an “Everything Bubble”. From our point of view, the concept of the classic investment portfolio, which calls for shares to satisfy the risk appetite and bonds as safety net, must be critically questioned. 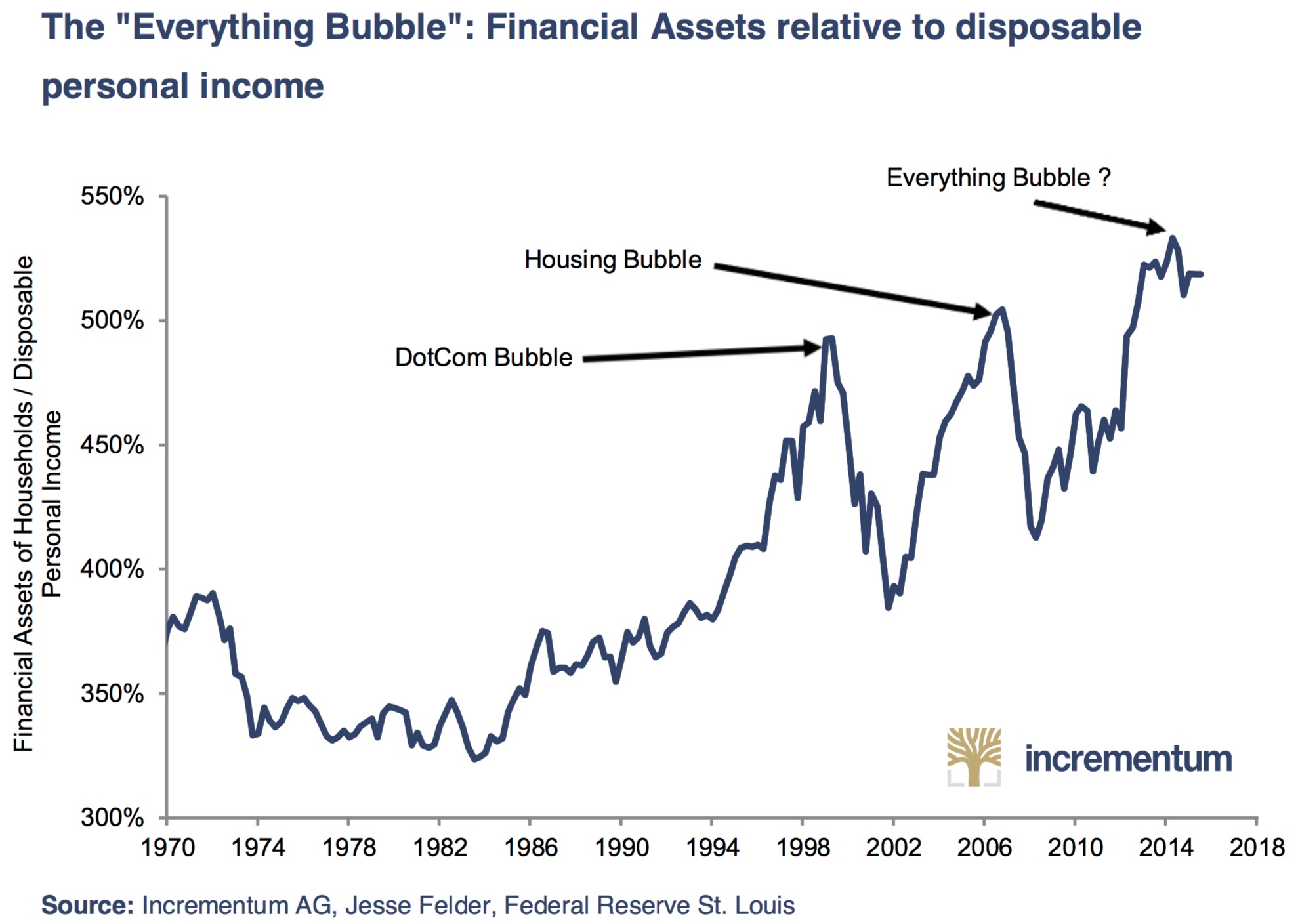 While markets are already celebrating the future successes of Trumponomics, the structural weakness of the US real economy is revealed yet again in the latest growth figures. According to the most recent estimate, the US economy expanded in Q1 2017 by a meagre 1.2 % y/y. In combination with an inflation rate of more than 2%, this means that the U.S. is at the edge of stagflation – a scenario we have warned about on several prior occasions. But markets are obviously taking a different view than we are. At least for now.

Moreover, the ratio of real assets to financial assets is currently the lowest since 1925. In a study worth reading, Michael Hartnett, chief strategist at Bank of America Merrill Lynch, recommends to “get real”, i.e. to reallocate investments from financial assets into real assets.

“Today the humiliation is very clearly commodities, while the hubris resides in fixed-income markets” as Hartnett explains. Gold, diamonds, and farmland show the highest positive correlation with rising inflation, whereas equities and bonds are negatively correlated with increasing prices, a finding that we have pointed out repeatedly. The political trend towards more protectionism and stepped-up fiscal stimuli will also structurally drive price inflation. 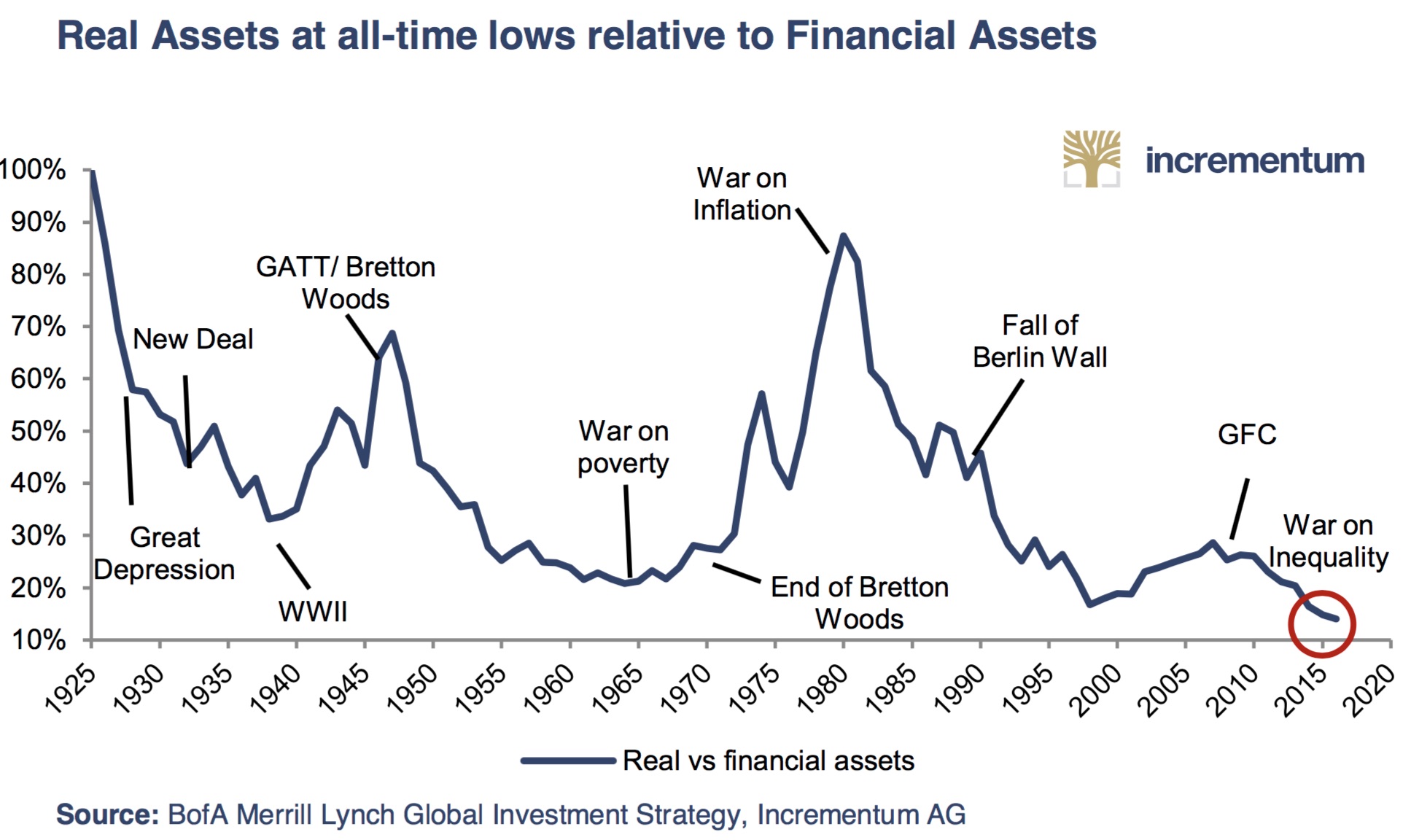 In the past years, rate cuts and other monetary stimuli have affected mainly asset price inflation. Last year, we wrote: “Sooner or later, the reflation measures will take hold, and asset price inflation will spill over into consumer prices. Given that consumer price inflation cannot be fine-tuned by the central banks at their discretion, a prolonged cycle of price inflation may now be looming ahead.” 2016 might have been the year when price inflation turned the corner. However, the hopes of an economic upswing due to Trumponomics and the strong US dollar have caused inflation pressure to decrease for the time being. Upcoming recession fears resulting in a U-turn by the Fed, and the consequential depreciation of the US dollar would probably finalise the entry into a new age of inflation. This will be the moment in which gold will begin to shine again.

WARNING: A Terrifying Trip Down The Currency Collapse Rabbit Hole