What Is Happening Right Now Is Truly Stunning

Aside from the continued pressure on gold and silver prices, what is happening right now is truly stunning.

November 3 (King World News) – Peter Boockvar:  Because of the intermingling of easy money, government financing and the high valuations of just about everything, it makes the Fed’s job here really difficult in terms of doing what they should do in approaching the employment and inflation situation rather than what they will. While really beginning with Greenspan, with the advent of QE in 2008 the Fed now has three masters, the US Treasury, the bond and stock markets and their officially anointed one, inflation and the jobs market.

Thus, gradual will be their mantra in order to try to satisfy all as it always is when it comes time to tighten policy and they will unlikely deviate from what’s expected, a taper of $15b per month until it’s done. This of course is really no way of confronting inflation as it will still take its balance sheet to $9 Trillion from about $8.5 Trillion today and rates will still be zero when done. For perspective, QE1 and QE2 started out each at $600b. What they should do is end QE today and start discussing rate hikes but that would be too upsetting to two of the constituencies, the markets and the US Treasury and why it would unlikely not happen.

Because they had previously decided to end QE by year end, the Bank of England has a much easier discussion tomorrow. Either hike rates or don’t. Either try to temper inflation via the demand side or don’t…

Where Do They Come Up With This Crap?
Christine Lagarde of the ECB today is pushing back against the market bets for next year that short rates will get less negative. “In our forward guidance on interest rates, we have clearly articulated the three conditions that need to be satisfied before rates will start to rise. Despite the current inflation surge, the outlook for inflation over the medium term remains subdued, and thus these three conditions are very unlikely to be satisfied next year.”

In response European yields are down for a 2nd day but notwithstanding all the ECB QE, there is still some life left in the marketplace in European bonds and it will give its opinion still on what the ECB should do. This is in contrast to the Japanese bond market which the BoJ has effectively killed off.

Whether this works or not, the United Auto Workers rejection of the Deere employment deal is a new sign of growing frustration with the current level of wages and the leverage workers think they now have. The no vote was a pretty resounding 55% no to 45% yes. The deal included a 10% initial raise and 5% increases in year 3 and year 5. It also included cost of living adjustments and retirement bonuses among other things.

Things Are Tough All Over
The UK services PMI was revised to 59.1 from 58 initially and vs 55.4 in September. Markit said “Looser international travel restrictions and greater domestic mobility helped to lift the UK service sector recovery out of its recent malaise in October.” New orders rose and “the impact of staff shortages was another rise in backlogs of work and greater willingness to pass on higher costs to new customers.” With cost pressures, “Average prices charged increased at a survey record pace, reflecting across the board pressures on operating expenses…Record rates of input price and output charge inflation appear to have dampened business optimism, which eased to its lowest since January. Comments from survey respondents also cited worries about prolonged staff shortages and constraints on growth due to the supply chain crisis.”

Yes, It’s Stagflation
So yes, it is the inflation itself that is both slowing economic activity and negatively impacting visibility and business expectations. Stagflation doesn’t have to be the economic scenario in the 1970’s for it to be referred in a similar fashion now. To me, the word simply means moderating growth and high inflation…

The October ISM services index jumped to 66.7 from 61.9 and that was well above expectations of 62 and the highest on record. 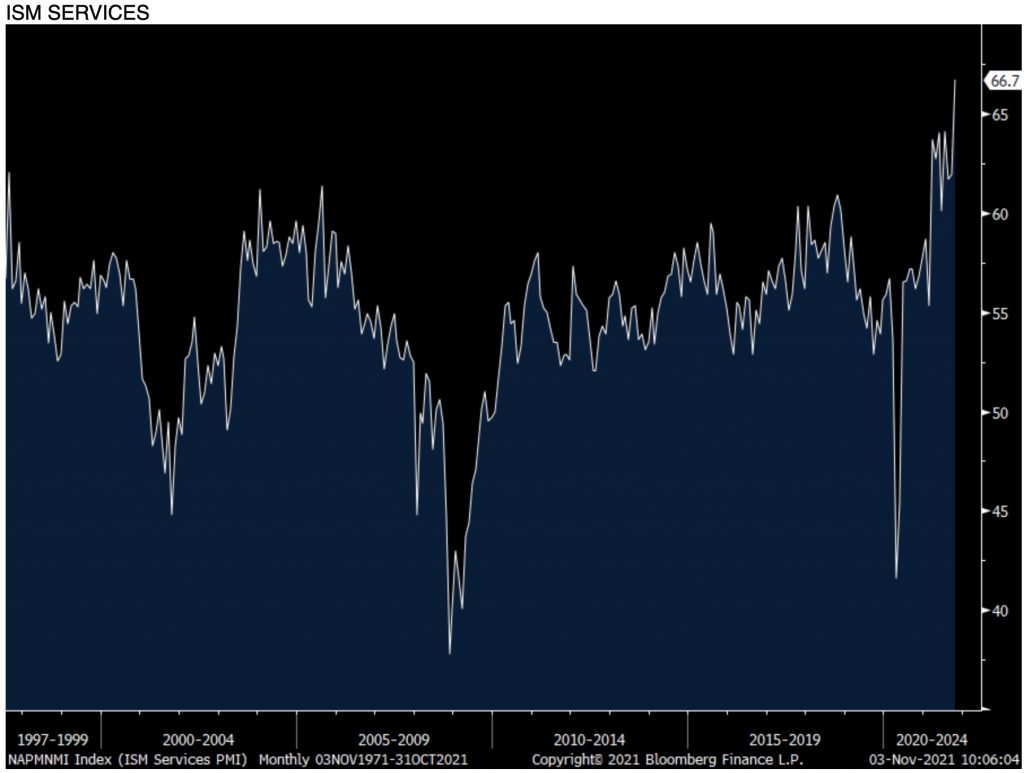 Part of the reason for the headline jump though was for the negative reason of even more supply constraints as Supplier Deliveries rose by 6.9 pts to 75.7 and that is the 2nd highest on record dating back to 1997. 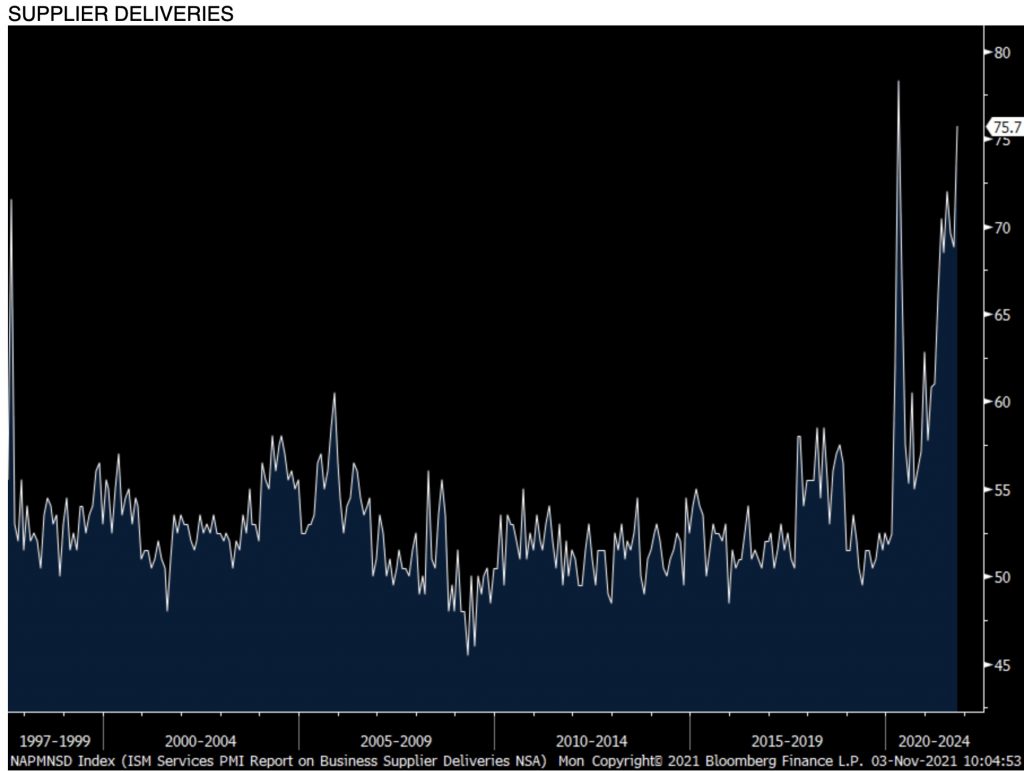 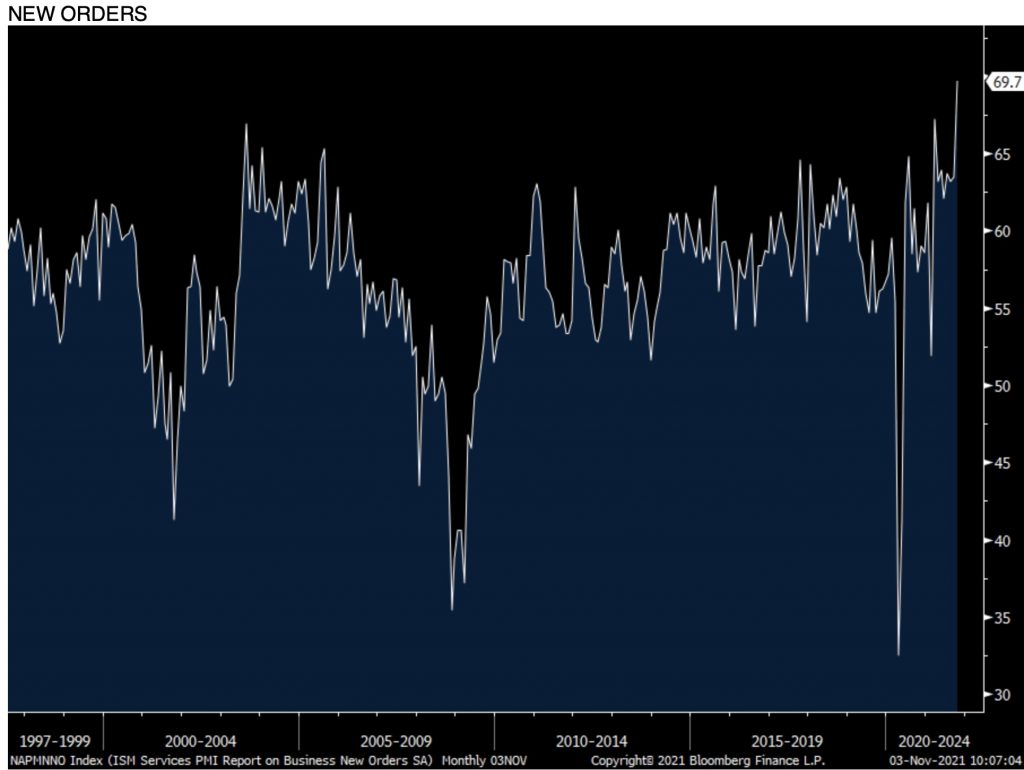 Backlogs rose by 5.4 to 67.3, also a high since this survey began in 1997. Inventories got even leaner, falling by 3.9 pts to 42.2, the least since March 2020 and 2009 before that. ISM included these comments on inventories, “Trying to increase, but very difficult to do so to availability and transportation” and “Inflation is creating lower inventory levels due to costs.”

Inventories Plunge To Lowest Level Since 2020
And 2009 Before That 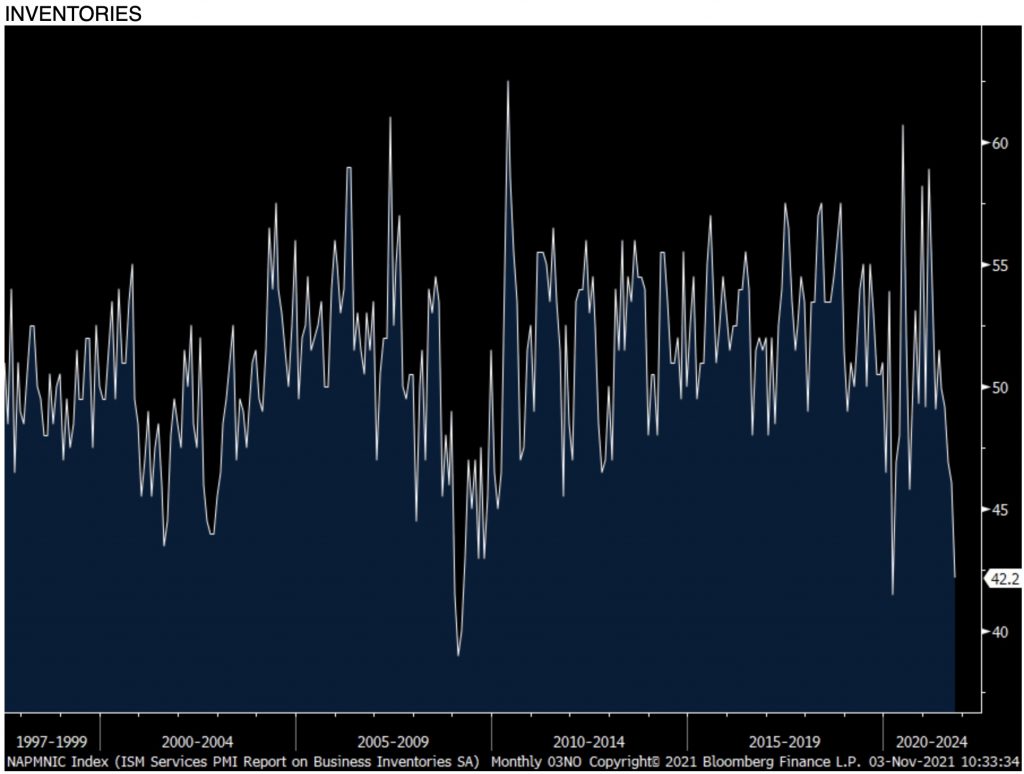 Both exports and imports were higher. Employment though did fall by 1.4 pts to 51.6 and that is the lowest since June.

Bottom Line
Bottom line, demand for services continues to outstrip the supply. And as stated, the rise in the headline read also was lifted by the supply problems (the quirkiness of the calculation). ISM did cite the “ongoing challenges, including supply chain disruptions and shortages of labor and materials, are constraining capacity and impacting overall business conditions.”

And this is what Markit said in their report that showed an increase to 58.7 from 54.9 about the outlook and I would regard as the caveat here, as seen above: “Finally, the level of optimism slipped to the lowest since February, as service providers reported ongoing concerns surrounding inflation and material shortages.”