December 15 (King World News) – Here is a portion of today’s note from legend Art Cashin:  Of Reflective Central Bankers – My good friend, Peter Boockvar, over at the Lindsey Group, penned a note this morning on some recent commentary from ECB members.  Here’s a bit:

A day after the ECB held everything constant in terms of both policy and their rhetoric, Governing Council member Ewald Nowotny spoke today and explained why on the latter as the former was of course expected. “Central banks are generally well advised to keep a certain continuity in their announcements and maintain a steady hand. It was clear that we wouldn’t make any changes in our communication now after we already made significant changes last time.” He acknowledged that they don’t want to fall behind the monetary curve because “it’s clear that the economy is developing” but at the same time “it also mustn’t act too quickly though.” Also of note in his comments is that he is not a fan of corporate bond purchases. “I am somewhat skeptical about this program, because it is concentrated on very large companies…Of course it leads to cheaper refinancing for those companies, but whether that is passed on to small and medium sized companies is something I am not so sure about. That’s why I don’t think it’s something we should necessarily expand.”

I talk about Nowotny’s comments because what has gone on over the last 10 years in the world of central banking has certainly been a teaching lesson not just for us but for central bankers themselves with all of their experiments. It’s important to understand what they think worked and what didn’t because inevitably there will be another economic downturn and the question writ large is what will central banks do about it in light of how far they’ve already gone. I would argue that while negative interest rates are still prevalent in Europe and Japan, I don’t believe central bankers there are comfortable with that policy but are reluctant to get out just yet. Even Kuroda is acknowledging the risks. All one has to do is look at bank profits and their equities to come to that conclusion. I believe Nowotny’s comments on buying corporate bonds, especially after the Steinhoff problem last week, is a vote against that part of the policy too. Thus, what would be the effective bullets to expend the next time something is needed? Unfortunately, there really isn’t much and therefore whenever the next crisis occurs, whenever that might be, central banks may very well be impotent in dealing with it. The markets just might have to take care of themselves which is fine but not something we are used to over the past 30 years when Greenspan took over.

As Peter implies, central bankers around the globe are tiptoeing on eggshells and will likely continue to do so.  Fragility apparently remains an issue.

Overnight And Overseas – In Asia, stocks are clearly mixed.  Hong Kong is up smartly, while Shanghai is clearly lower.  Japan is moderately lower, while India is higher.

In Europe, London is fractionally higher, while markets on the continent are modestly lower.

Among other assets, crude has bounced solidly and gold is a bit higher.  The euro is fractionally better against the dollar and yields are a few ticks higher.

Have an absolutely wonderful weekend! 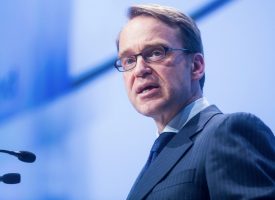 A Dire Warning From An Insider