One Of Egon von Greyerz Most Important Articles Ever

As the world edges closer to the next crisis, today the man who has become legendary for his predictions on QE and historic moves in currencies and metals shared with King World News one of his most important articles ever.

A very Dangerous World
January 12 (King World News) – Egon von Greyerz:  “This week I will discuss Fed bubbles and a potential imminent major market event, including an extremely important chart. But first, the week has been overshadowed by Iraq and Iran, which again has reminded us of terrorism in various forms.

Terrorism is not just an act of violence. Cyber attacks can have devastating effects like paralyzing air traffic or making all of your digital assets disappear…

The killing of the Iranian General Soleimani reminds us all how near the world is to a nuclear war. The shooting down of a Ukrainian passenger plane “by mistake” in Teheran also tells us how easy it is for a country to press the wrong button. If that happens to be a nuclear button, the consequences would be catastrophic.

Financial Cyber Terrorism
Most of us have no influence over wars or terrorist attacks and therefore we only have limited means to protect ourselves from these events. But a terrorist event that we are all exposed to on a daily basis is financial cyber terrorism.

Most financial assets today are digital. Whether you have a bank account, stocks, bonds or any other financial asset, all you have is a digital entry. In 2018 in the UK, financial companies saw a fivefold increase compared to 2017, in data breaches or cyber attacks. And in April 2018, seven UK retail banks, including Santander, Royal Bank of Scotland, Barclays and Tesco Bank, had to limit or shut down their systems after sustained attacks. Losses are major and the cost to repair the systems are substantial. And it will get worse. Executives at leading UK banks and payment companies say that they are under constant fire from attackers.

For most investors this is a risk area that virtually nobody worries about. Just imagine, a major cyber attack can totally wipe out your assets or at least make them disappear for a very long time before the total position of the bank can be reconstructed. In our company, we worry about risk on a daily basis. We worry about market risk, financial and economic risk and security risk, including cyber attacks. Investors who keep the majority of their assets in the financial system are not protected properly against these risks. Any one of these risks can totally wipe out your paper fortune.

This is why it is absolutely essential to keep an important part of your wealth in a form and place that protects you from risks that can bankrupt you. We spent quite some time analyzing these risks already over 20 years ago. The consequence of our analysis was that physical gold stored outside the financial system was the best insurance against financial risk, including currency debasement.

But it isn’t enough just to buy gold and store it outside the banking system. The gold must be stored in the safest vaults in the world and in the safest jurisdictions.  For example we offer our clients the largest and safest private gold vault in the world, based in the Swiss Alps. The vault is nuclear bomb proof as well as earthquake and gas attack proof. This short video clip gives a small taste…click below to watch the amazing video:

For a major wealth preservation asset like physical gold and silver, we are opposed to online trading platforms. These might be fine for smaller amounts but not for core capital. Online trading is an unacceptable risk when major amounts of wealth are involved. Human intervention and knowledge of the client is critical to protect against fraud and cyber attacks.

How We Protect Our Clients’ Assets
For communication with clients, internet and emails are not safe and should therefore be avoided. We use a messaging platform via secure servers in the Swiss Alps. This avoids emails being intercepted.

To protect against cyber security, we keep all company and client data on very secure proprietary servers in the Swiss Alps. All data is backed up in a different mountain which also has EMP (electro magnetic pulse) protection. EMP attacks can destroy all computer data and most companies are not protected against such attacks since this is very costly.

The risks and the protection discussed above are absolutely critical when you store important amounts of your wealth and data. Very few companies and investors take these risks seriously.  That is a very grave error.

The Fed’s Endless Bubbles
The Fed is forever blowing bubbles. The unwinding of the Fed’s balance sheet from the peak at around $4.5 trillion to $3.75  trillion low took place gradually over a two year period. Then, bang, in early September 2019 all hell broke loose and the Fed started pumping major funds into the banking system. One Fed governor called it plumbing but few realized that the Fed was in the process of saving a financial system that is leaking like a sieve. 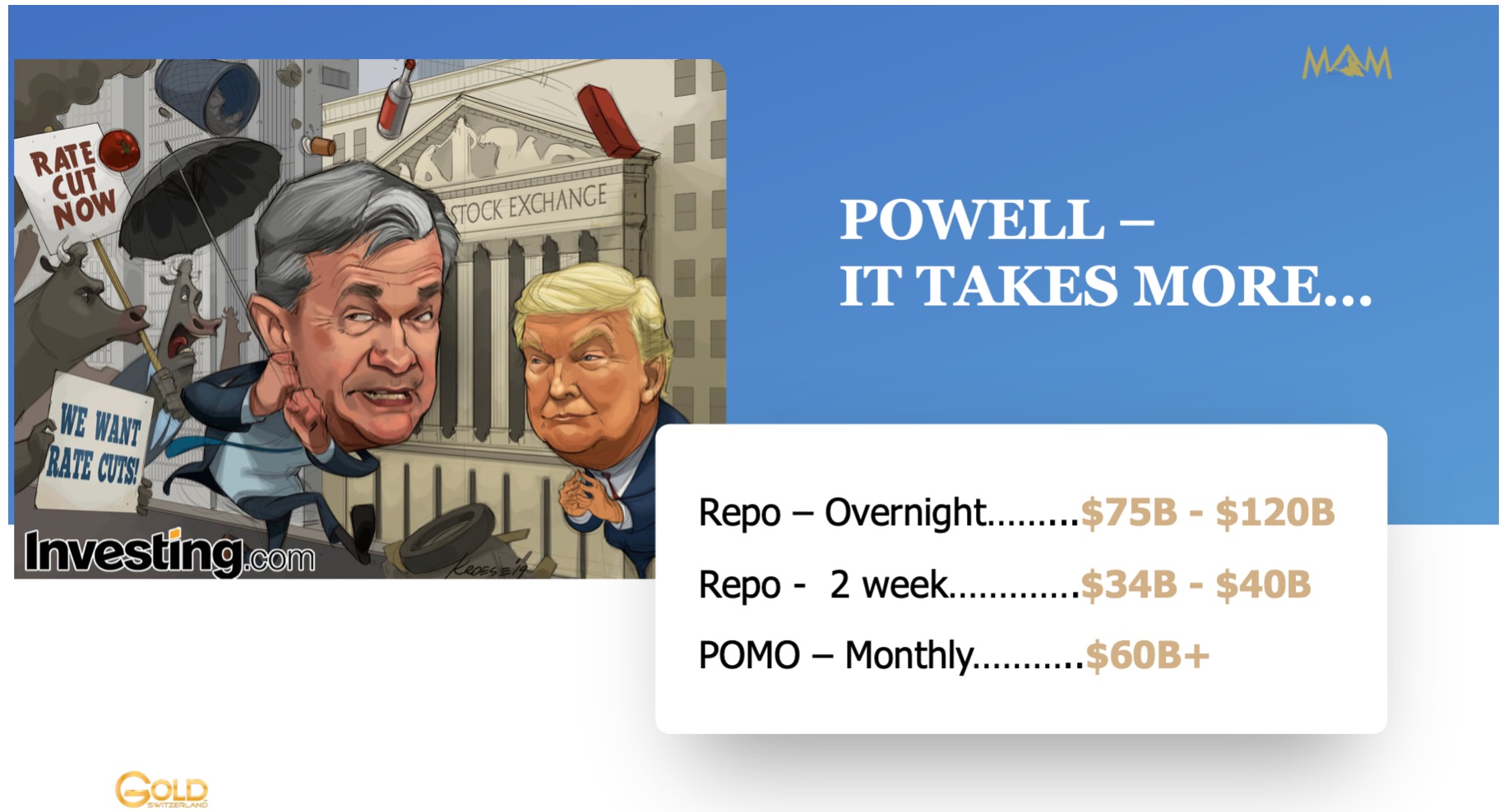 It must be obvious even to the bankers that adding more quicksand will only weaken the system further as you can’t solve a problem by the same means that created it in the first place. But they have no other solution. Turning off the money spigots would lead to instant collapse of the system as well as of stock and bond markets.

The banking system was ready to collapse in 2006 when global debt was $125 trillion. A massive infusion of more quicksand, in the form of worthless paper money, gave the impression that the system was saved. At the end of 2006 the four central major banks — Fed, ECB, PBOC and BOJ — had total assets of $5 trillion. Today they are at $20 trillion and rising. Both the US, Eurozone and China have started to expand their balance sheets in the last few months. Japan will certainly follow suit. The leverage effect of central bank liquidity has had the consequence of doubling global debt since 2006 to $260 trillion. 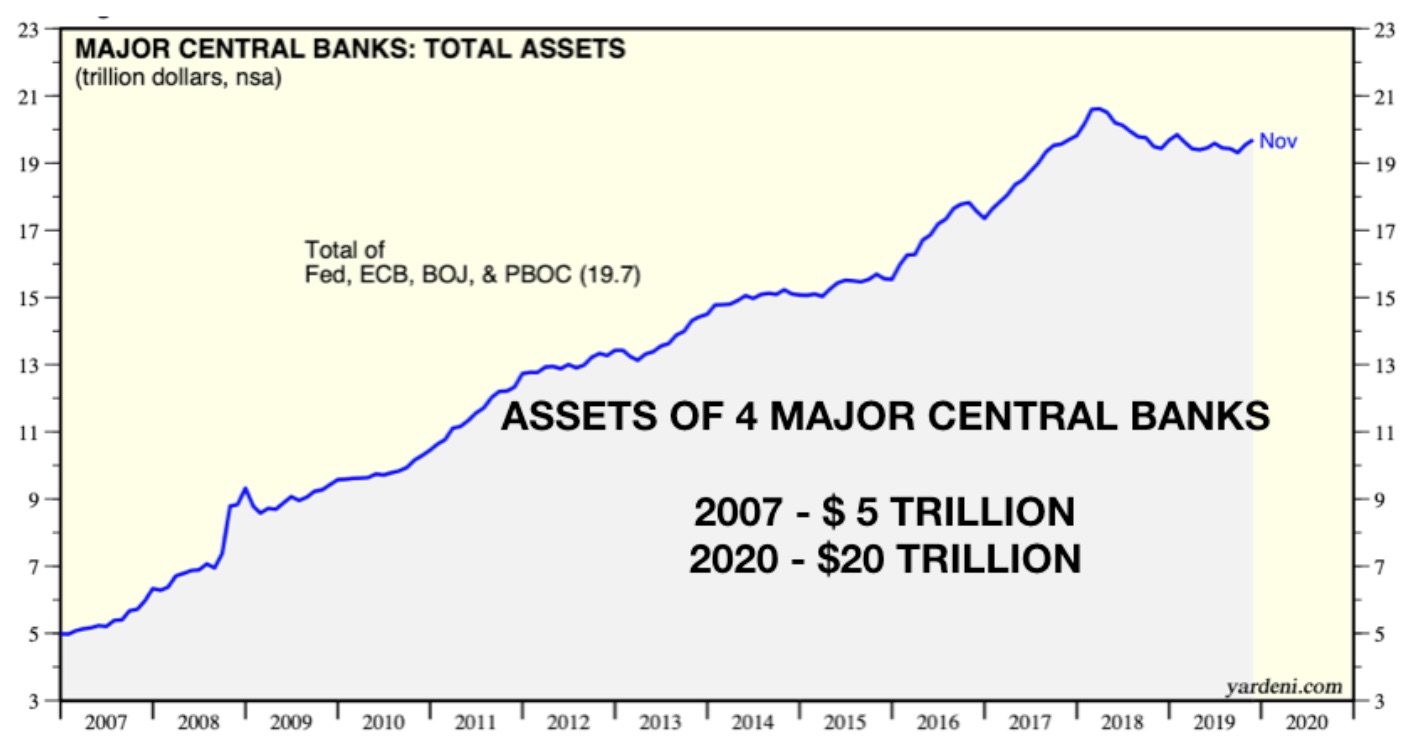 The explosion of global debt has increased risk exponentially but that is not the biggest problem. The real time bomb is the derivative market. The BIS in Basel and the banks are most probably misreporting the total derivative position which is estimated to be $1.5 quadrillion and maybe over $2 quadrillion. When the real pressure in the system starts, there will be no liquidity in the derivative market and therefore most of these nuclear instruments of self-destruction will be worth nothing. At that point QE could reach the quadrillions as hyperinflation ravages and paper money goes to ZERO.

The banks with the biggest derivative positions are Deutsche Bank, JP Morgan, Citigroup and Goldman Sachs. Together their official position is just below $200 trillion. The real position is probably much higher. We will know when the crisis starts.

The $425 billion expansion of the Fed’s balance sheet since QE started in September of 2019 has been like manna from heaven for stock investors. The Dow has gained another 2,400 points since then. This is the perfect scenario for Trump and his reelection, as long as global liquidity increases and markets believe that the additional money is actually worth something. 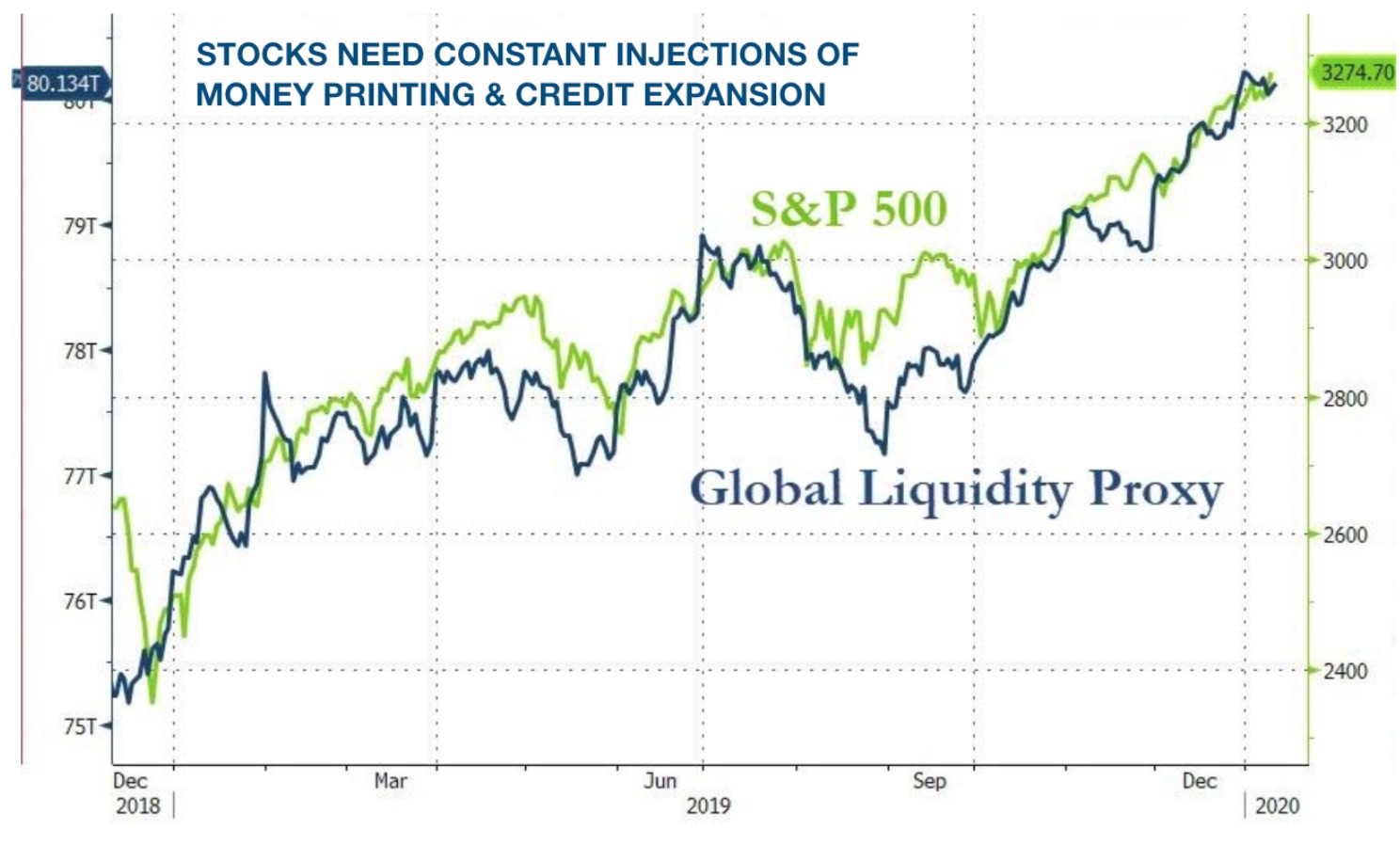 But all that is needed in overvalued markets is a break of confidence. And with the 3 dozen global risks that I outlined in last week’s article, the market is now in the final stage of uber-euphoria with prices going up whilst profits are stagnating as the graph below shows. 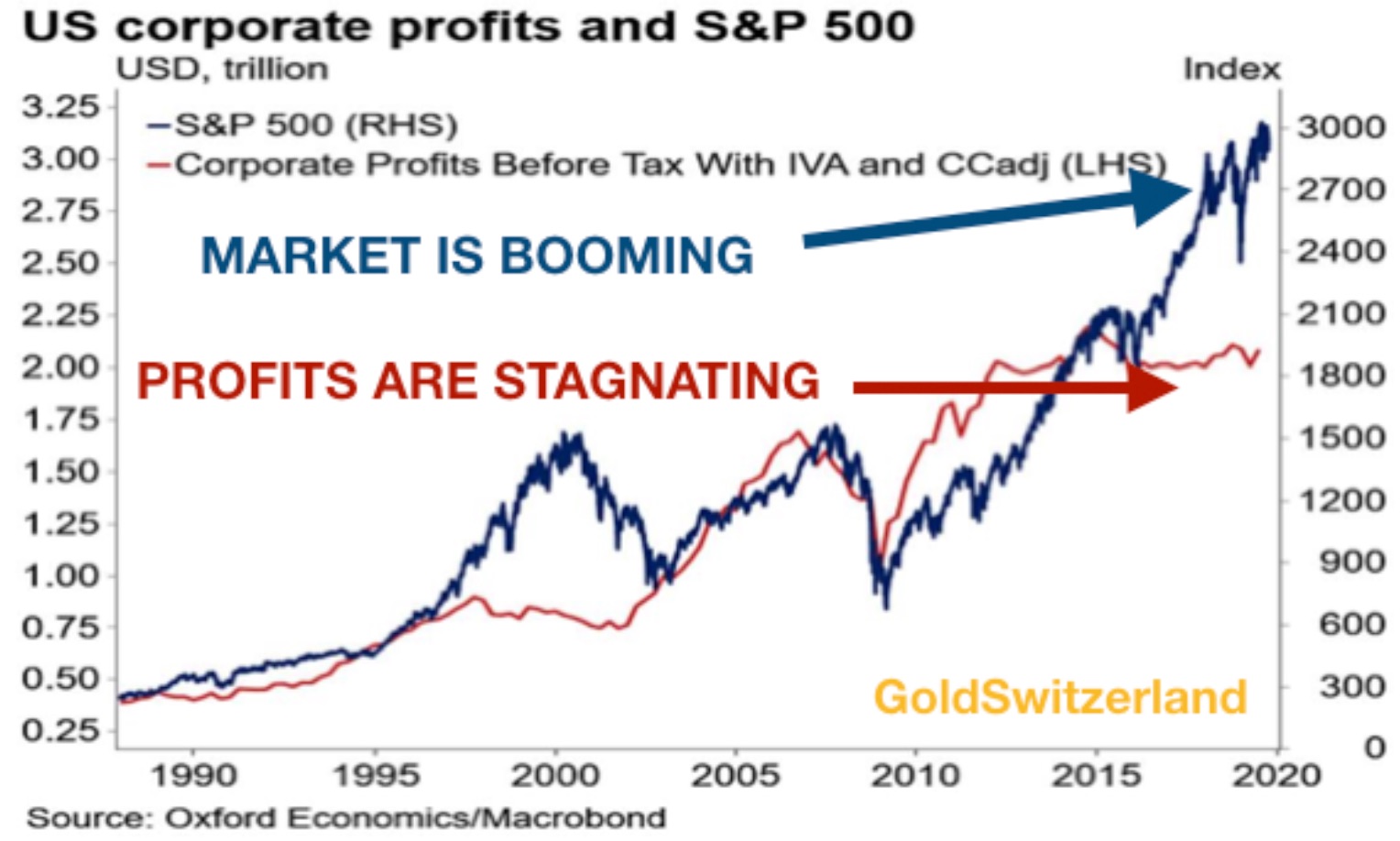 If we look at the detailed picture it is a lot worse than the picture above shows. Almost 40% of US companies lost money in the last 10 months as the Wall Street Journal just reported. That is a remarkably high percentage and the highest since the late 1990s.

And if we look at the technical picture, recent highs in stocks are not confirmed by technical indicators. The quarterly chart of the Dow below shows a bearish divergence between price and the Relative Strength Index. This is a very bearish signal that eventually will end in a market crash. 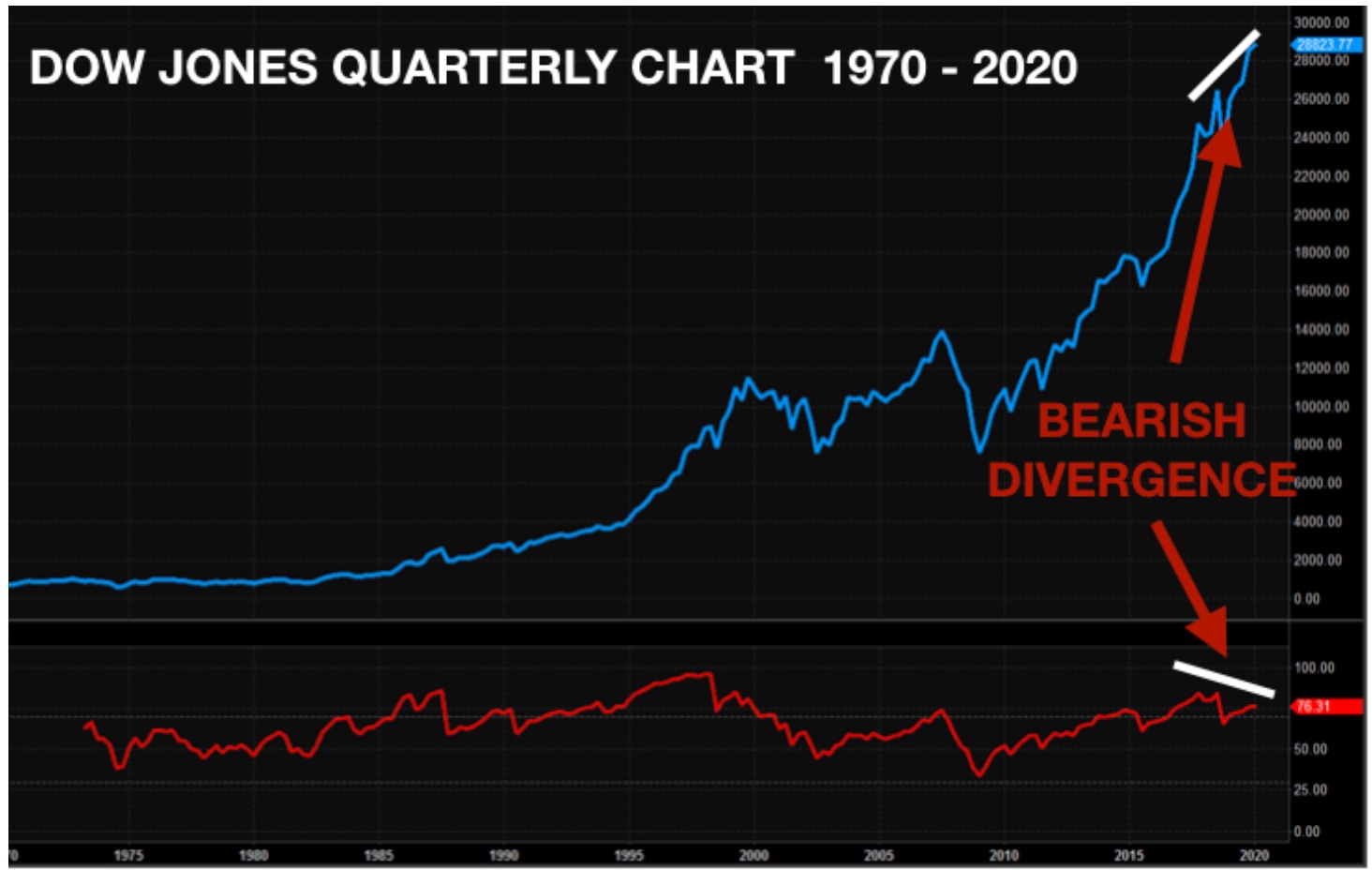 There are a number of different technical indicators including our proprietary cycle model that points to a top being imminent. It could all happen as soon as this coming week. How it all unwinds we will soon see. It could start with a slow decline which accelerates down gradually, or technically we could have a crash this week or next.

As usual we will only know afterwards. What we do know is that fundamental and technical risks are at an extreme. So anyone who is heavily exposed to the general stock market should consider protecting or reducing his position substantially. When the bear market starts it will shock everyone by its relentless decline. Most investors will either stay invested like Alfred, or buy the dips and be totally slaughtered.

Finally, let’s look at the most important chart that tells us the future of the world, stocks and gold. It is the Dow/Gold ratio. This ratio was at 1:1 in 1980, which means both the Dow and gold were at the same price which was 850. In 1999, the index reached 44:1. (See chart below) We then saw a decline to 5:1 in 2011. The ratio has now finished a 9 year correction from the 2011 low. As the chart shows, the MACD (Moving Average Convergence/Divergence) turned at the end of 2019. This is an extremely important indicator and tells us that stocks are starting a collapse vs gold. The initial target is 1:1, a 95% fall, but I am quite certain that the final level will be well below that. 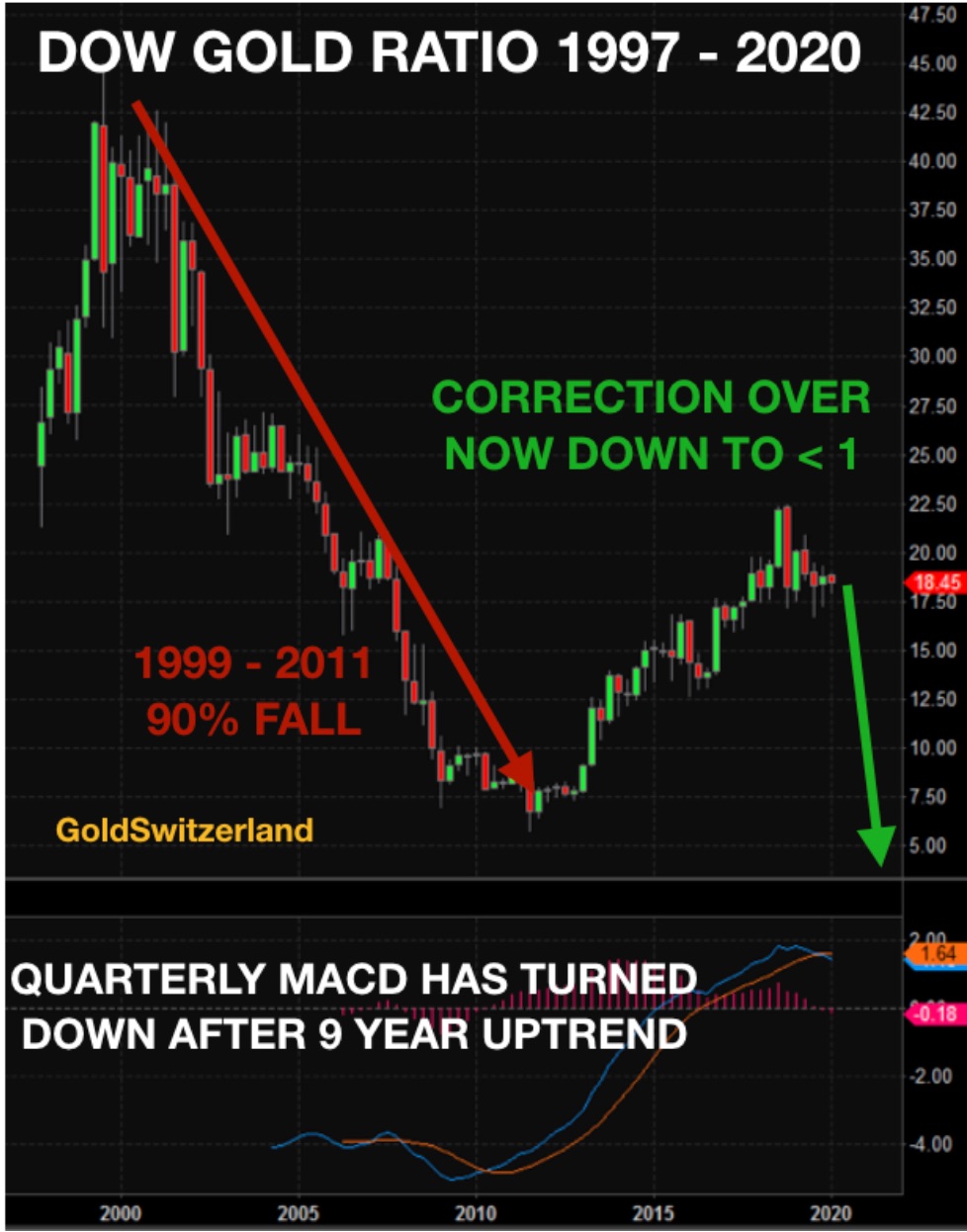 For investors who take heed of the chart above, they are likely to preserve their wealth as long as they hold physical gold outside the financial system. And for the ones that don’t, the years ahead will destroy their paper wealth in money, stocks, bonds and other securities…For those who would like to read more of Egon von Greyerz’s fantastic articles CLICK HERE.

Alasdair Macleod – Gold And Major Surprises In 2020
ALSO RELEASED: Roadmap For An Upside Explosion In The Silver Market CLICK HERE TO READ.