With everyone focused on the Fed’s decision not to raise interest rates, one of the greats in the business just flashed this major alert and said gold is rising as a Phoenix. 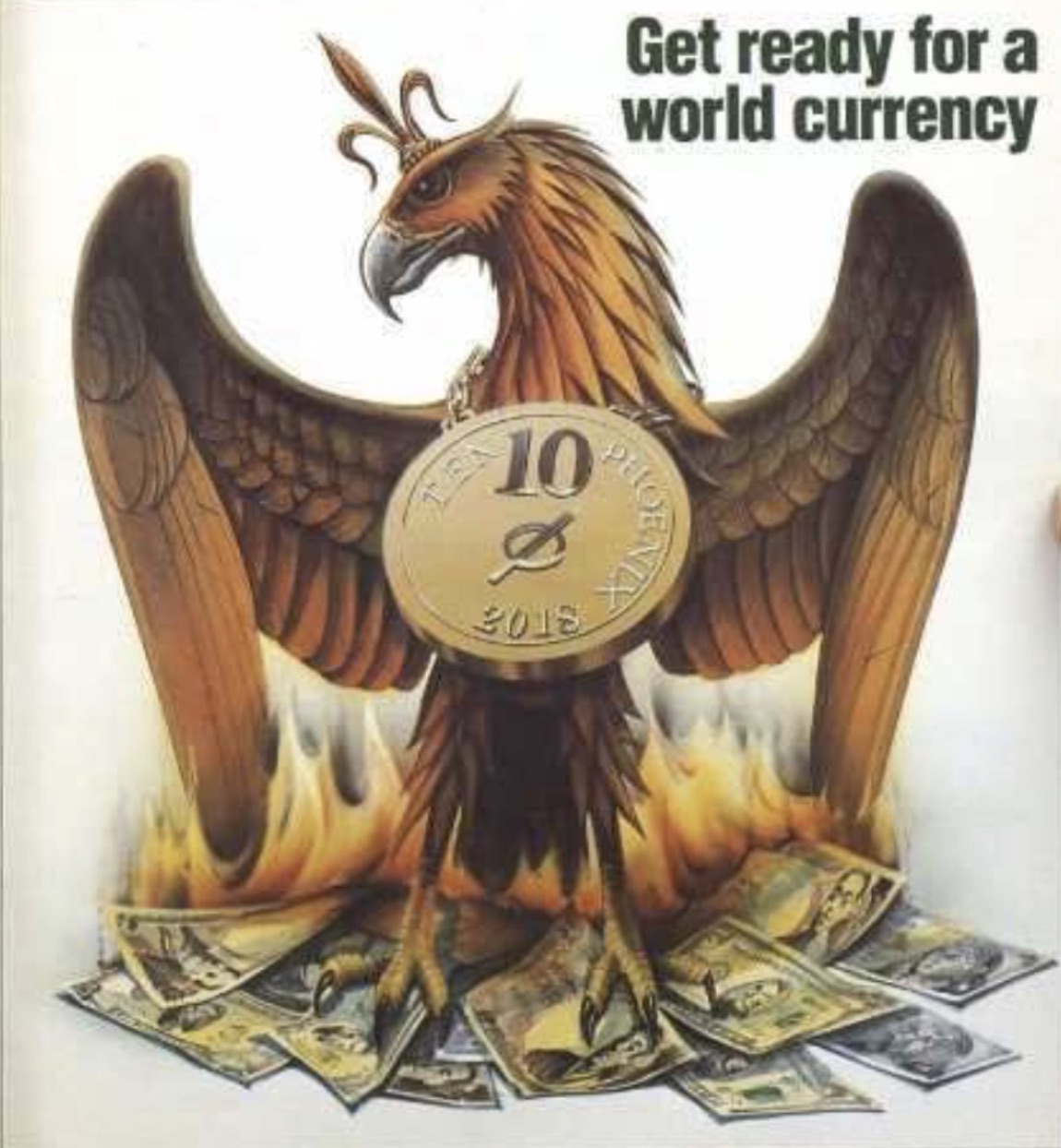 Gold Shares As Rising Phoenix
By Trey Reik, Senior Portfolio Manager, Sprott USA
March 25 (King World News) – In our February report, 2019 Top 10 List, we presented 10 fundamentals supporting a portfolio allocation to gold in 2019. Here we shift our focus to the portfolio utility of gold mining equities. At Sprott, we view the investment merits of gold and gold shares as distinctly different. Gold provides the capacity to remove virtually unlimited amounts of capital from the vagaries of the global financial system at a moment’s notice…

In Figure 1, we compare the annual performance of spot gold1, gold mining equities (GDM Index)2 and the S&P 500 Index.3 By and large, the interrelationship of these three asset classes has proved roughly as might have been expected — gold shares have (intuitively) outperformed broad equity averages when bullion prices have been especially strong, and underperformed when the momentum of rising bullion prices has stalled or reversed into outright decline. 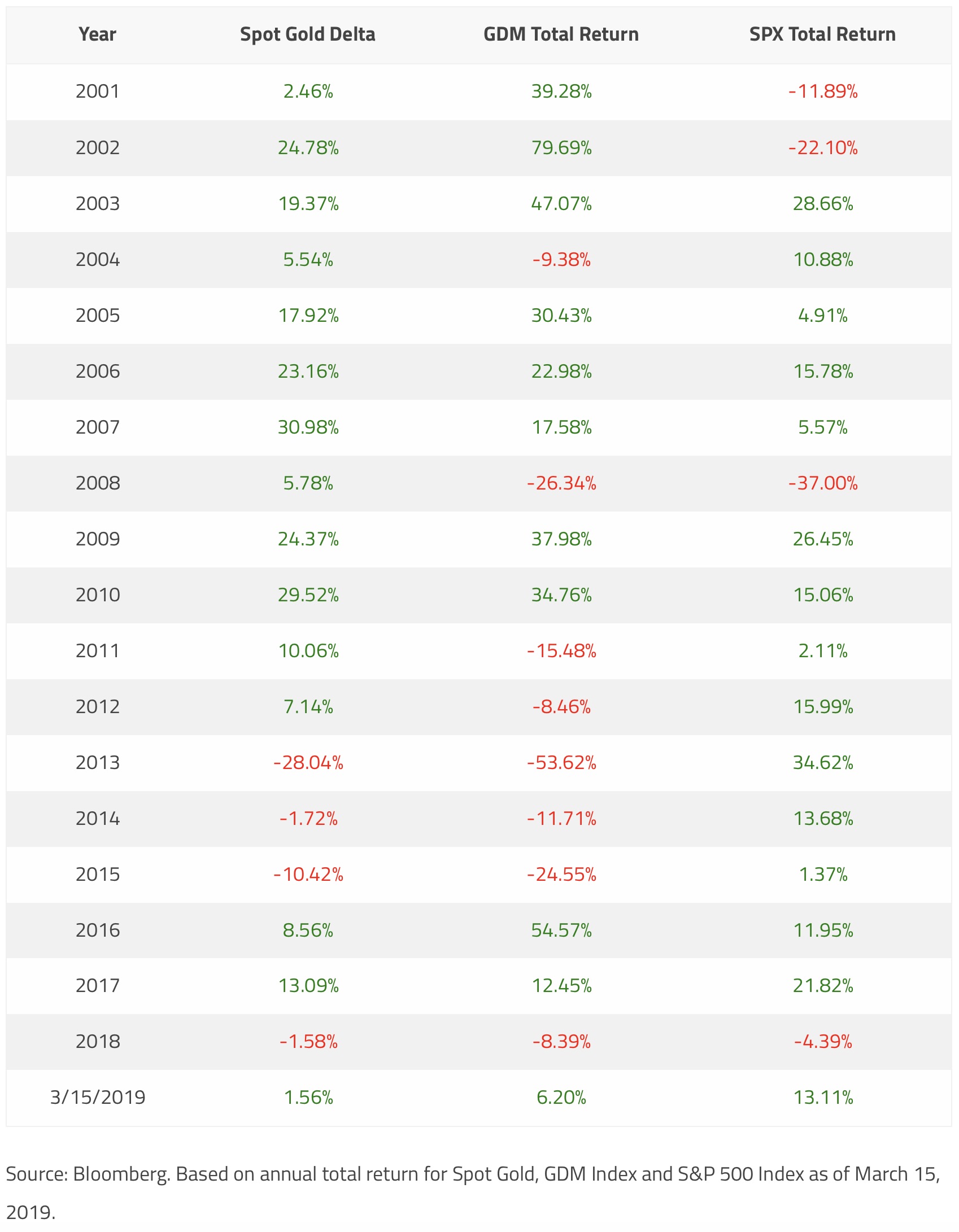 Between 2001 and 2012, spot gold posted 12 consecutive years of price gains, an extremely rare occurrence for any investment asset. As exciting as this period was for gold investors (gain of 474.4%), the outperformance of gold shares was extraordinary (up 628.3%).

For gold shares, the inescapable flipside of upside beta-to-bullion leverage through 2011 was subsequent downside gearing which proved every bit as potent. From an intraday high of 1,855.09 on 9/9/11, the GDM Index declined 81.27% to a low of 347.41 on 1/19/16. It is fair to say that any asset class shedding four-fifths of its value over a four-year period is unlikely to breed a broad class of dedicated constituents. On the other hand, it is from such misery that compelling investment propositions are spawned.

Given our evaluation of the current macroeconomic landscape, we suspect gold equities are poised for a span of significant nominal and relative performance.

SEC accounting rules guide gold-miners to include in their reserve statements only the portions of ore bodies which can be mined profitably at a reasonably assumed gold price. As the gold price rises, miners can therefore upgrade their mineral resources to the reserve category based on audited assumptions of profitability. Finally, a rising gold price fuels expanding corporate exploration budgets, in turn, enabling the value creation of new discoveries. Because most new gold is found close to existing deposits, a rising gold price reflexively enhances the value of miners’ existing land packages.

This beta-to-bullion dynamic suggests that the most important factor in performance of gold equities should always be the direction of the gold price. Nonetheless, a common reservation about gold shares is the perception that their equity component introduces vulnerability to the same type of broad-based equity turbulence against which a gold investment is supposed to provide protection.

M&A on the Rise as Gold Miners Consolidate
We also believe that we have entered a new mergers and acquisitions (M&A) cycle. Since 2000, there have been nearly 1,500 acquisitions in the precious metals industry. 2019 alone has seen the industry’s biggest players making headlines for mergers and new ventures.

Gold mining is one of the only industries we can think of with a “negative survivorship bias.” Unlike most industries, the most senior gold miners are not necessarily the competitors with the brightest or safest prospects. It is extremely difficult for gold miners to replace their mined reserves on an annual basis, for the simple fact that gold appears in the earth’s crust at only 4-or-so-parts-per-billion. Therefore, in order to avoid being priced as depleting-resource assets, senior gold miners are generally forced to acquire emerging producers to supplement dwindling proprietary discoveries. After 12 straight years of rising gold prices through 2012, gold’s 45% decline through December 2018 exposed an inordinate number of poor development and acquisition decisions across the industry. Now that legacy write-offs have been taken and capital discipline has been reinvigorated, the most senior gold miners are on stronger footing to take the next step towards industry rationalization. 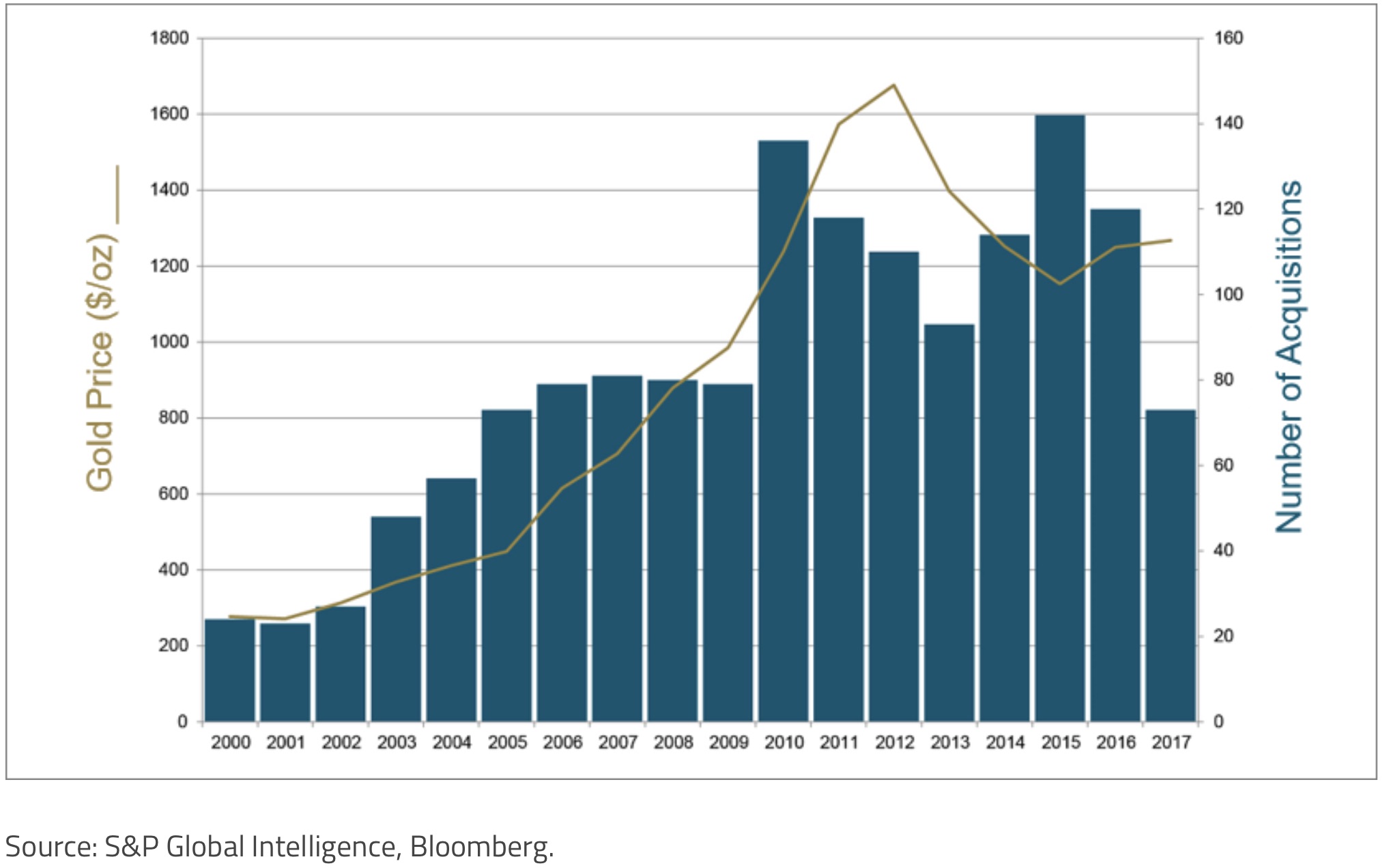 Late last year, industry maverick Mark Bristow engineered what amounts to a reverse-takeover of larger Barrick Gold by the far more efficiently managed Randgold Resources. Given Mr. Bristow’s legendary discipline in converting EBITDA to free cash flow, we expect the Randgold/Barrick merger to catalyze significant reorganization and right-sizing of Barrick’s far-flung assets. Following Mr. Bristow’s lead, Newmont responded within months to Randgold’s throwing of the gauntlet with an equally surprising bid for industry behemoth Goldcorp. In recent weeks, Barrick and Newmont have agreed to an innovative and far-reaching joint venture to extract synergies from joint operation of the two companies’ sprawling Nevada assets. While it is still too early to predict how industry dynamics will ultimately shake out, it certainly appears that the starting gun has been fired on long-overdue consolidation in the gold mining space.

It is our expectation that high-quality producers just below the top-tier of industry capitalization will be the ultimate beneficiaries of intelligent rationalization of the gold mining industry. As seniors shed and trade their non-core assets, we anticipate subsequent balance sheet liquidity to be deployed in competitive bidding for the most attractive mid-tier and emerging producers — precisely the tranche of the gold-mining industry we favor at Sprott.

Outlook for Gold Equities in 2019
Ebullient equity markets and a range-bound gold price have constrained investor enthusiasm for gold equities in recent years. Despite significant gains during 2016, gold shares remain in 2019 near historic lows in many valuation metrics. As shown in Figure 1, during the 25 years through 2008, the ratio of the XAU Index4 to spot gold averaged 0.2497x but today rests at only 0.0584x. We recognize there are a few legitimate factors weighing on this ratio’s decline. Component XAU companies have issued more shares, contemporary mining opportunities are increasingly challenging and gold miners are still disabusing investors of their reputation for poor capital allocation. Nonetheless, we view the 77% decline in relative valuation between prominent gold-miners and their sole output (bullion) as an investment proposition with highly compelling reversion-to-mean potential. 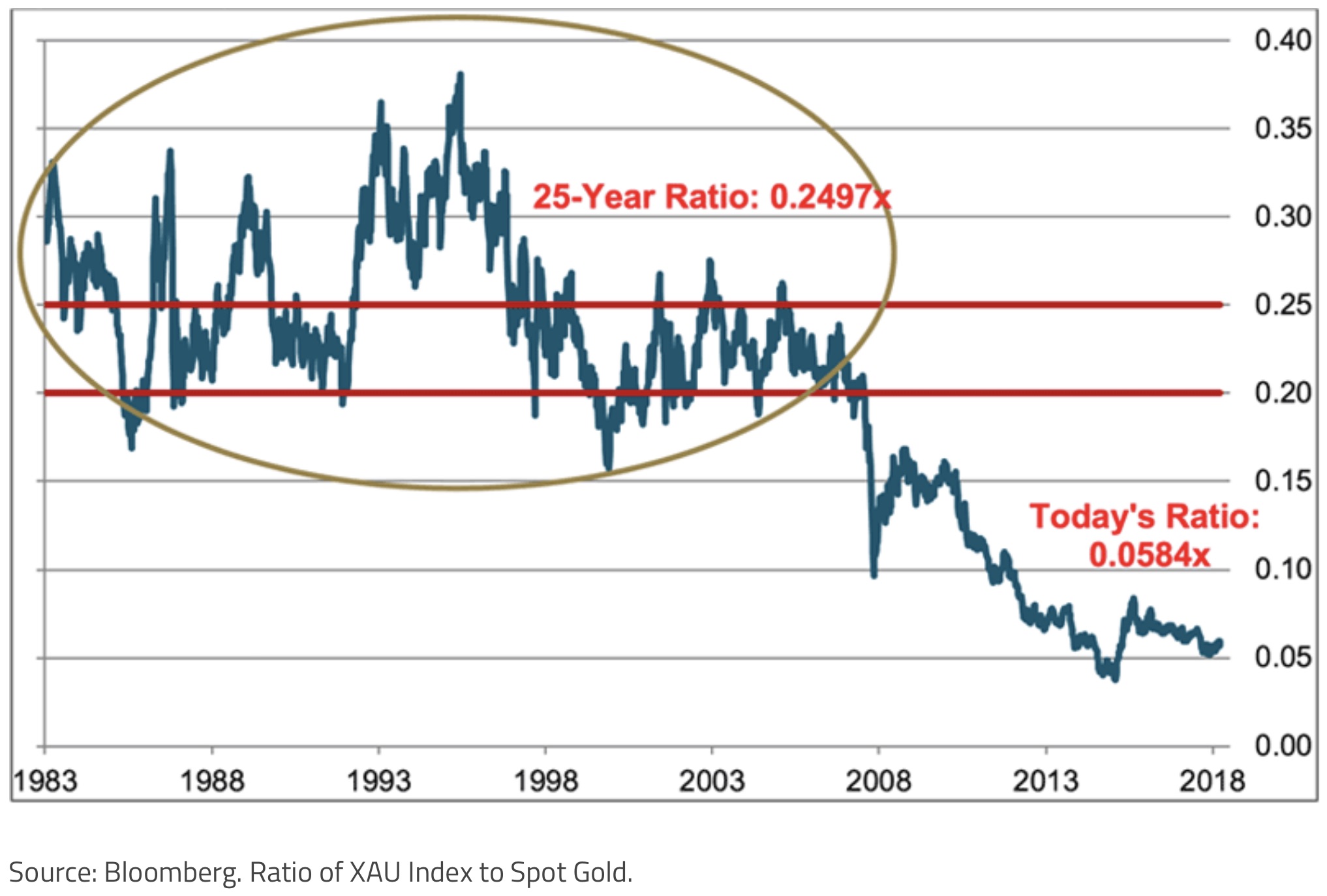 As we have mentioned, we remain confident in the proven capacity for gold miners to generate portfolio alpha during significant corrections in U.S. equities. As shown in Figure 4, since 1996, there have only been two periods of extended inverse performance between the GDM Index and the S&P 500: 1996-through-2002 and 2012-through-the-present. In the first instance, gold shares were literally left for dead as the internet bubble hit full frenzy through March 2000. Then, as the S&P 500 fell 52%, gold stocks tripled. 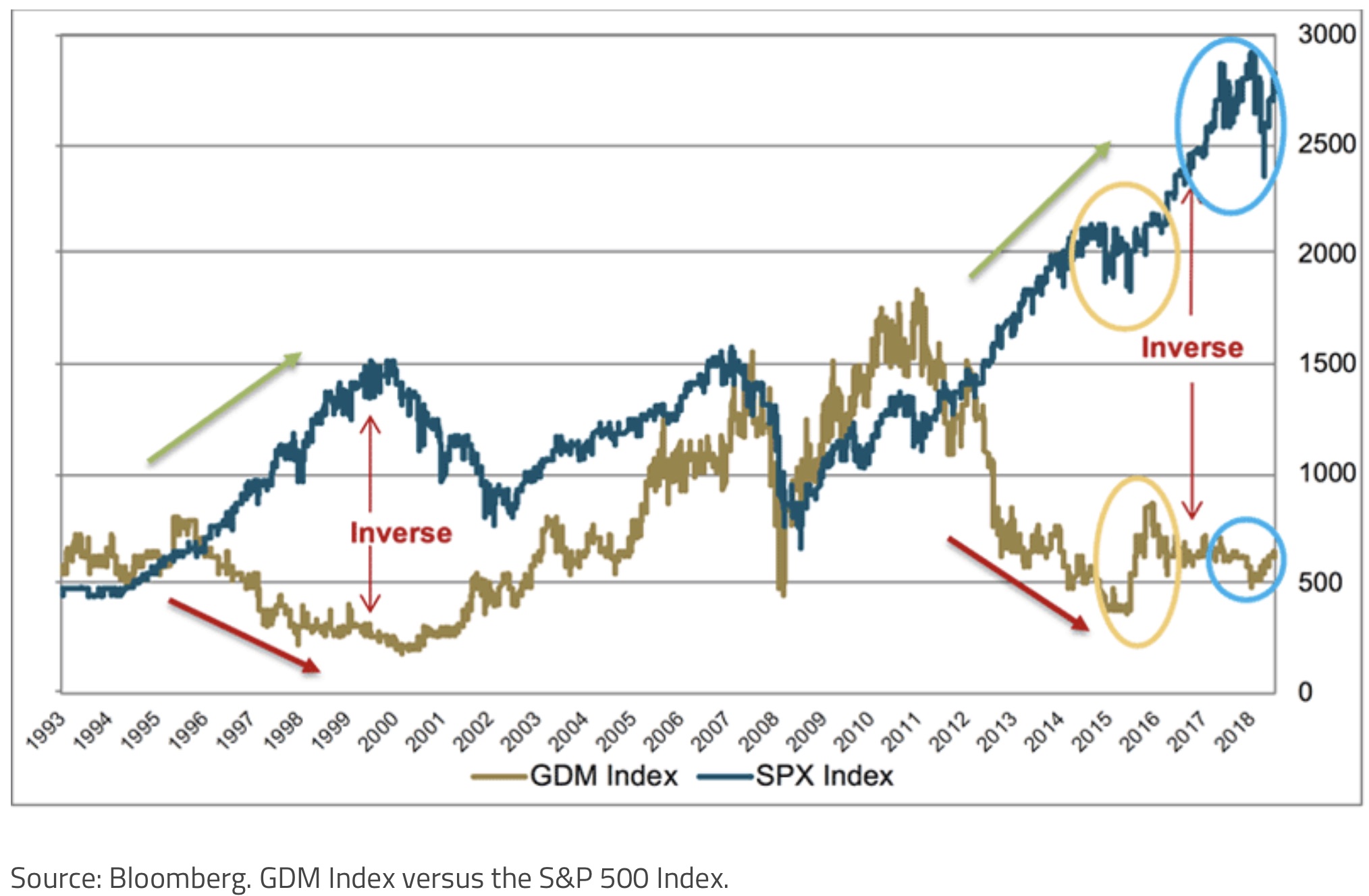 In the current episode, the S&P 500 and gold shares have (counter-intuitively) moved in opposite directions ever since the Fed’s September 2012 announcement of open-ended QE3. During the first half of 2016 (yellow ovals), this gaping divergence appeared to be closing with a vengeance. Since the Trump election shock, however, gold shares have essentially moved sideways for two years while the S&P 500 has resumed its blistering upward trajectory. At the risk of talking our own book, it appears the S&P 500 is carving out the mother of all head-and-shoulder tops precisely as the GDM Index is percolating towards its next significant advance (blue ovals).

Especially in context of the post-Trump equity liftoff, we expect the “jaws of life” divergence between the S&P 500 and gold equity averages to close with trademark gusto in the near future. To us, redeployment of a portion of general U.S. equity exposure to gold shares at this juncture represents a non-consensus portfolio allocation with extremely high probabilities for success.

If we are correct in sensing an important inflection point for relative valuations of precious metals equities versus general equities, what might be in store for gold shares for the balance of 2019 and beyond?

***Also just released: Greyerz – The Most Important Chart Of This Century And What Will Take The World By Surprise CLICK HERE TO READ.