With many people wondering what’s next for the US dollar, it looks like this will trigger the next major surge in the gold price.

“If we keep running deficits at this rate, we will need to think about what kind of debt burden
we are going to leave for Keith Richards.” — Kevin Muir

Gold Bull Market
By Ronald-Peter Stoeferle, Incrementum AG Liechtenstein
July 16 (King World News) – In view of the growing supply of US Treasuries, a further increase in yields does not seem unlikely. For example, the Treasury Borrowing Advisory Committee expects government debt issues of $955 billion for FY2018 (as compared to $519 billion last year) and volumes beyond $1,000 billion for FY2019 and FY2020. As a result of the most recent tax cuts, these numbers will probably have to be revised upwards.

The forecast of the Congressional Budget Office (CBO) for the US deficit in the coming ten years also looks worrying. The CBO expects the budget deficit to rise until 2028. The annual deficit already exceeds $1 trillion every year. By comparison, the budget deficit of the entire Eurozone fell slightly short of $200 billion in 2016…

It is important to note that the CBO’s forecast hinges on very positive premises, not the least being that the CBO has based its model on non-recessionary years. Thus, from our point of view, the deficit will probably be significantly higher in the coming ten years than the CBO forecasts. The cumulative deficit for 2018 to 2028 amounts to $13,200 billion. 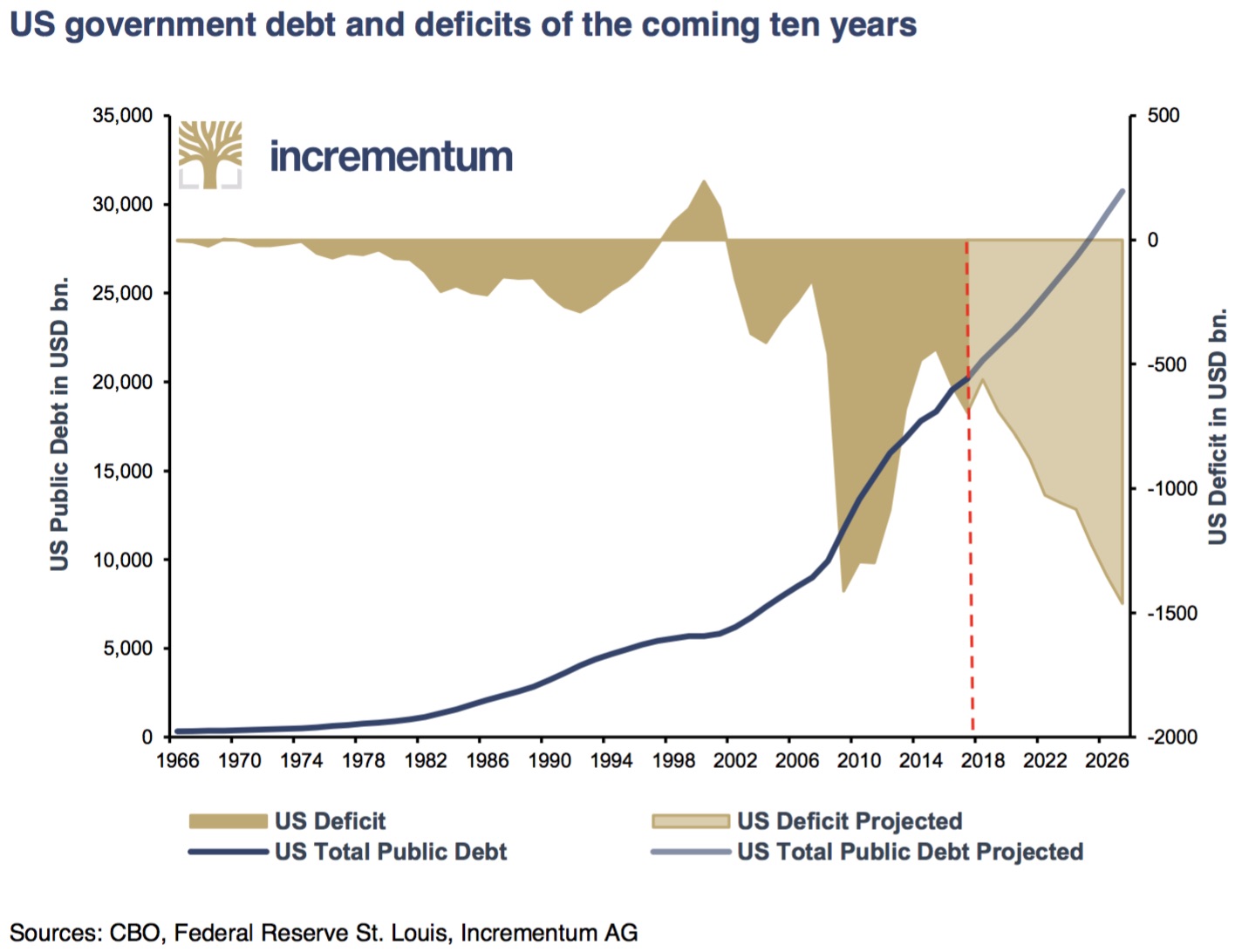 According to these forecasts, the deficit in 2028 will be larger than the one incurred in the crisis year of 2009 ($1,413 billion) and will set a new record, at $1,526 billion. As a result, US government debt outstanding also continues to rise rapidly. The total amount of US public debt is expected to reach $33,851 billion in 2028, which will be tantamount to a six-fold increase within a decade. Moreover, it can be seen that interest service will reach a new record high of more than $500 billion in 2018. 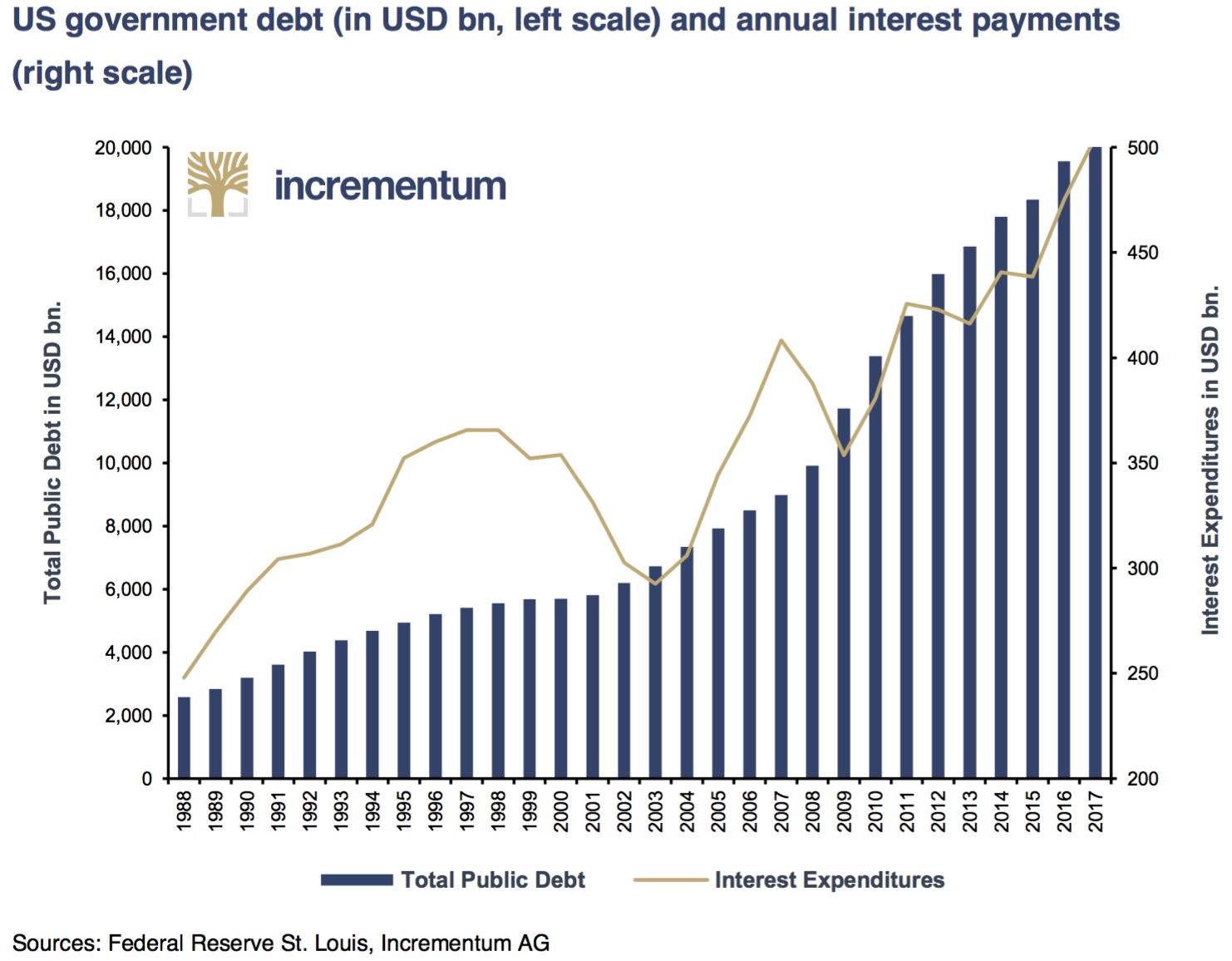 We have seen budget deficits of a similar magnitude only once before, in the period 2009 to 2012. However, that was a phase when the Fed was absorbing almost $500 billion worth of debt per year with its QE program. Now we are in QT mode, which makes the current situation considerably more delicate.

Conclusion
We stick to our statement made last year, that gold is in the early stages of a new bull market. The signs of a weak dollar accompanying that bull market are becoming more plentiful as we speak. We feel it is particularly worth noting the depreciation of the dollar within the context of trade wars. No surprise then that US Secretary of the Treasury Steven Mnuchin broke with the tradition of supporting a strong US dollar when he said in Davos, “Obviously a weaker dollar is good for us as it relates to trade and opportunities.” 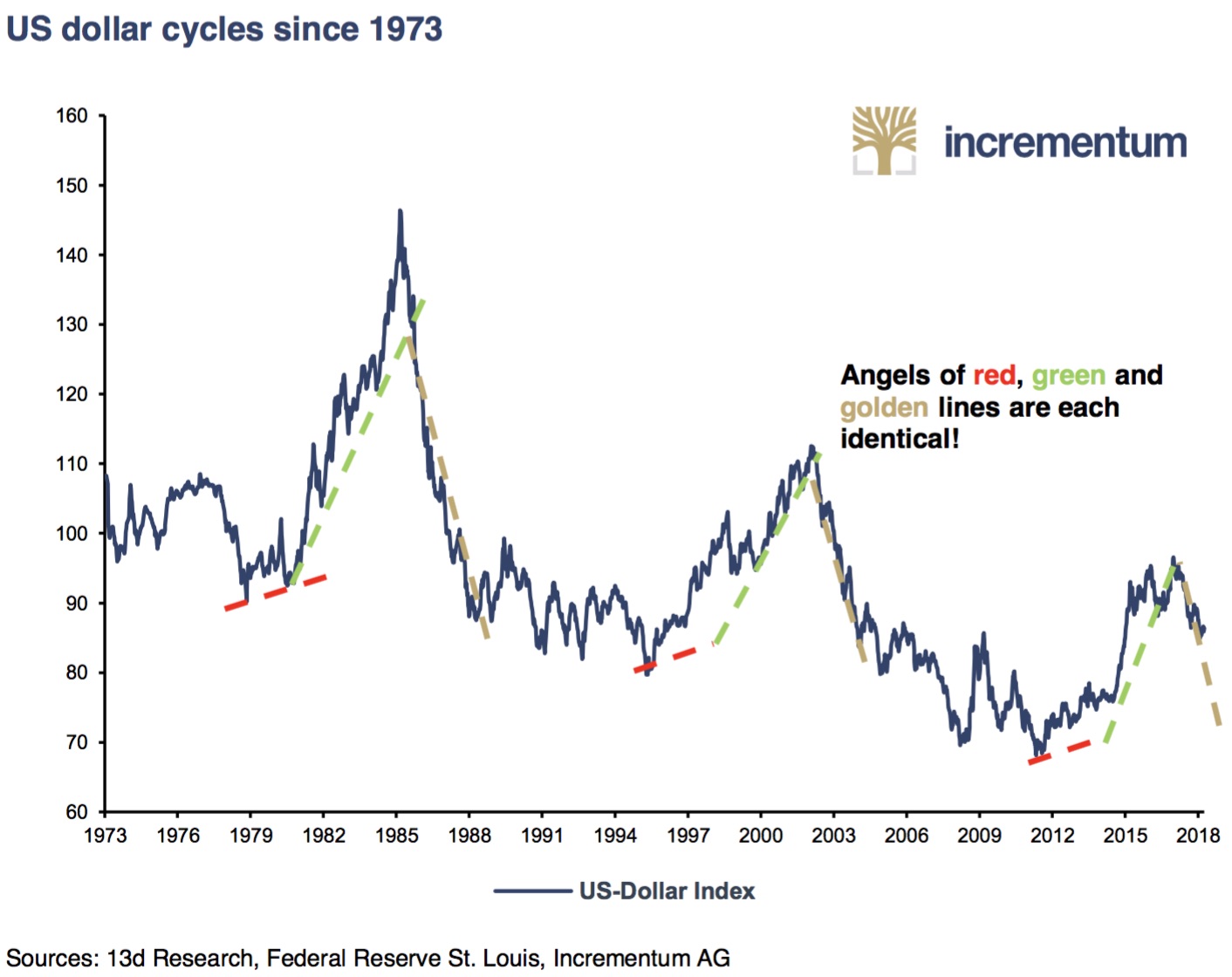 But even among the gold bulls there are numerous supporters of a strong US dollar hypothesis, among them our esteemed colleague Brent Johnson, whose words should in our opinion be heeded as well. Our German colleague Professor Thorsten Polleit has summarized the (short-term) bullish case for the US dollar in his usual succinct and eloquent manner:

“As long as the other big economic and currency areas of the world are in a stagnant mood, the scope of the Fed’s interest rate hikes seems to be limited. The Americans are unlikely to aim at an unwanted, interest-driven appreciation of the external value of the US dollar, which would be detrimental to the domestic economy and US company profits. They will therefore not be able to fully escape the depreciation policies that we have seen, for example, in Japan and the Eurozone and will instead have to go down the same road for a little while. The US dollar will not fulfill its role of safe haven, as investors would like it to do….

At best, the US currency is a through street on investors’ flight from the turmoil of the global uncovered paper money system, which the US currency will ultimately also have to face. But before the US dollar starts to fail, all other currencies that depend on the greenback will find themselves in trouble: The demise of the uncovered US dollar as foreign exchange benchmark is starting at the fringes and will corrode the system all the way to the core.”

ALSO JUST RELEASED: Fred Hickey Just Warned The Mania In Stocks Will Usher In A Collapse. Also, Weighs In On What’s Next For Gold CLICK HERE TO READ.